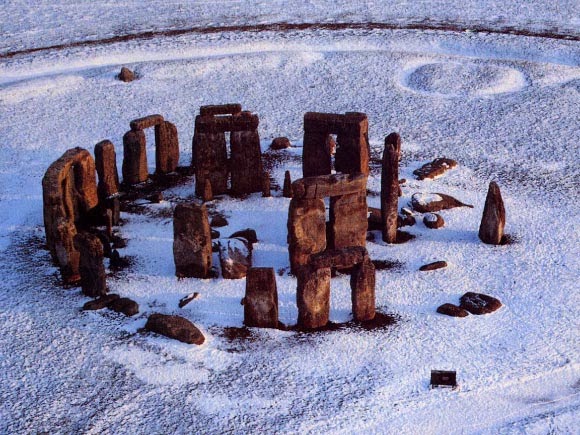 (German) British researchers, reporting in the journal Time and Mind: the Journal of Archaeology, Consciousness and Culture, may have cracked the mystery of why the builders of Stonehenge chose to haul some of its giant bluestones 320 km (200 miles) away from Wales to Salisbury Plain.

Their pilot study is focused on bluestones in the Carn Menyn Ridge, Preseli Hills, south-west Wales, the source area of some of the Stonehenge bluestones. According to local legend, the bluestones possess magical and healing properties.

But what Dr Paul Devereux and Dr Jon Wozencroft from London’s Royal College of Art have now discovered are the extraordinary ‘sonic properties’ of these stones, which might have led to their use in Stonehenge.

After testing over 1,000 stones at points all along the Carn Menyn Ridge, they found that on average, between 5-10 percent of the rocks ‘ring’ when hit. In localized places, the figure rises to 15–20 percent, ‘with a few very small hotspots up to double that percentage again.

Being in no doubt that the source area of the Stonehenge bluestones is a noteworthy soundscape, the scientists traveled to Stonehenge itself. The sonic properties of the bluestones were tested in situ, the first time this had ever been done.

“Was sound a key reason behind the otherwise inexplicable transport of these stones from Preseli to Salisbury Plain – whether they were to be rung at Stonehenge, or simply because the megalith builders associated them with the magical properties of the astonishing Carn Menyn soundscape?

“Stonehenge will never tell us for certain. But given all that the study has discovered, such a suggestion may well ring true with further research.”

Cancer Healed With Wheatgrass - Easy HOW TO Previous post
Death, Rebirth and Love: The Ayahuasca Experience Next post