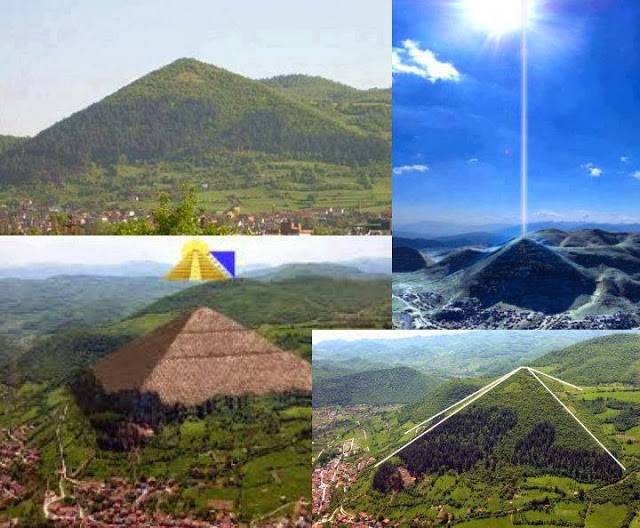 The Bosnian Pyramids: Summary and Discoveries

In April 2005 Dr.sci. Sam Semir Osmanagich, Foreign Member of the Russian Academy of Natural Sciences, Professor of Anthropology at the American University in Bosnia-Herzegovina, first traveled to the town of Visoko, 20 miles northwest from Sarajevo, the capital of Bosnia-Herzegovina.

Dr. Osmanagich’s attention was caught by two regularly shaped hills, which he later named the Bosnian Pyramids of the Sun and Moon.

For thousands of years locals have considered those hills to be natural phenomena because they were covered by soil and vegetation.

However, when he first saw their triangular faces, obvious corners and orientation toward the cardinal points, Dr. Osmanagich knew that they had to be constructed by a force other than nature. Since investigating pyramids for decades, Dr. Osmanagich knew that the pyramids found in China, Mexico, Guatemala and El Salvador had the same type of soil and vegetation coverage.

In 2005 work began on this project and construction companies and geologists carried out core drilling and geo-morphological analysis. It was then announced to the world, at a press conference, that the first pyramids in Europe had been discovered.

340.000 man-hours in archaeological excavation, sample testing and radiocarbon dating was carried out in the period from 2005 to 2011. It was determined that the Bosnian Valley of the Pyramids consists of five pyramids discovered to date which were named: The Bosnian Pyramids of the Sun, Moon, Dragon, Mother Earth and Love. The site also includes a tumulus complex and a huge underground labyrinth.

Watch: The Revelation of the Pyramids – Crucial Information;

This discovery is historic and changes the knowledge of the early history of Europe for several reasons:

1. These are the first pyramids discovered in Europe

2. The site includes the largest pyramid structure in the world — The Bosnian Pyramid of the Sun with its height of over 220 meters is much higher than the Great Pyramid of Egypt (147 meters).

3. The Bosnian Pyramid of the Sun has, according to the Bosnian Institute for Geodesy, the most precise orientation towards cosmic north with the error of 0 degrees, 0 minutes and 12 seconds.

4. The Bosnian Pyramid of the Sun is completely covered by rectangular concrete blocks. The properties of the concrete, including extreme hardness (up to 133 MPs) and low water absorption (around 1%), are, according to the scientific institutions in Bosnia, Italy and France, far superior to modern concrete materials.

5. The pyramids are covered by soil which is, according to the State Institute for Agro-pedology, approx. 12,000 years old. Radiocarbon dating from the paved terrace on Bosnian Pyramid of the Moon, performed by Institute of Physics of Silesian Institute of Technology from Gliwice (Poland) confirmed that terrace was built 10.350 years ago (+/- 50 years). These findings confirm that the Bosnian pyramids are also the oldest known pyramids on the planet (according to main stream history).

6. Beneath the Bosnian Valley of the Pyramids there is an extensive underground tunnel and chamber network which runs for a total of more than ten miles.

7. Ceramic sculptures have been discovered in the underground labyrinth with a mass of up to 20,000 pounds which makes them the largest found so far from the ancient world.

8. Discovered in the vicinity was the tallest tumulus in the World: 61 meters high. Its nearest competitor, Sillbury Hill in England is 60 meters high. The Bosnian tumulus consists of two-layer megalithic terraces, clay layers and artificial concrete layers.

Read: Extensive System of Caves Discovered Under the Pyramids;

A team of physicists detected an energy beam coming through the top of the Bosnian Pyramid of the Sun. The radius of the beam is 4.5 meters with a frequency of 28 kHz. The beam is continuous and its strength grows as it moves up and away from the pyramid. This phenomenon contradicts the known laws of physics and technology.

This is the first proof of non-herzian technology on the Planet. It seems that the pyramid-builders created a perpetual motion machine a long time ago and this “energy machine” is still working.

In 2010, in the underground labyrinth, three chambers and a small blue lake were discovered. Energy screening shows that the ionization level is 43 times higher than the average concentration outside which makes the underground chambers into “healing rooms”.

Further electromagnetic detection in 2011 confirmed that levels of negative radiation through the Hartman, Curry and Schneider grids are equal to zero in the tunnels. There was no technical radiation (from power lines and/or other technology) found in the tunnels and no cosmic radioactivity. Ceramic sculptures are positioned over the underground water flows and the negative energy is transformed into positive.

All of these experiments point to the underground labyrinth as one of the most secure underground constructions in the world and this makes it an ideal place for the body’s rejuvenation and regeneration.

The energy beam is theorized by Dr. Osmanagich as the reason the pyramids were built; to provide ancient civilizations a powerful source of clean energy. This is already a widely supported theory set forth by the book “The Giza Power Plant” by Christopher Dunn published in 1998.

The Bosnian Pyramid of the Sun being 30% larger than the largest pyramid at Giza and the extensive pre-historical underground labyrinth system is further evidence supporting the power plant theory.

Nicola Tesla’s (1856-1943) patented free energy methods were rejected due to their inability to be metered and monetized.

“We urgently need to change our mistaken point of view that our ancestors were stupid and accept that they had an advanced understanding of the fabric of nature and the universe, just like Nikola Tesla, whose ideas were suppressed as they did not and do not fit in the reigning economic model,” states Phillip Coppens, author and investigative journalist.

“The pyramids are proof that our ancestors knew and worked with an energy technology that we are now finally able to measure, but are still short of fully understanding.”

Coppens along with Klaus Dona of Austria and dozens of speakers attended the International Conference Bosnia Pyramid in Sarajevo, Bosnia-Herzegovina which is held annually to release findings to the public.

Italian archaeologists Dr. Ricarrdo Brett and Niccolo Bisconti discovered an organic material on the top of the concrete blocks that cover the Bosnian Pyramid of the Sun. Carbon dating was performed in the Lab in Kiev, Ukraine with astonishing results: 24,800 years +/- 200 years which gives the minimum age of the pyramid structure.

The pyramid structures that were built in Bosnia and across the globe over 10,000 years ago cannot be duplicated by modern science and machinery in the 21st century and there is no explanation for who could have built them in our recorded history.

Pyramids have now been found on every continent on Earth and prove — beyond a shadow of a doubt — that pyramids were built by ancient civilizations with far greater technology than we now possess and that they were used to produce energy.

Read: The Real Builders of the Pyramids;

The placement of the tens of thousands of pyramids around the globe on the earth’s energy grid, aligned with the universal energy field is a lost science that is now being rediscovered. This science can only be explained when we re-examine much of what we have been taught about history and open our minds to unfold the truth.