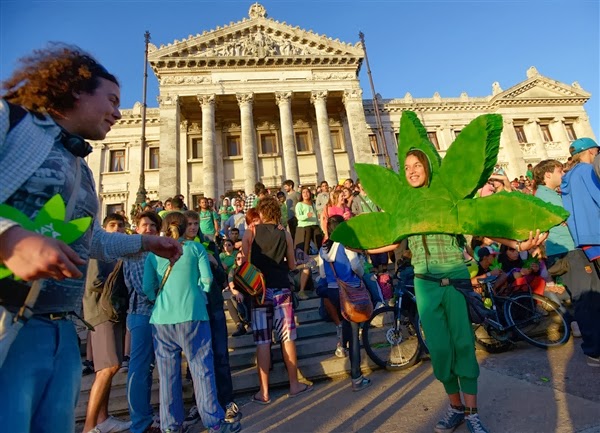 Uruguay became the first country to legalize the growing, sale and smoking of marijuana on Tuesday, a pioneering social experiment that will be closely watched by other nations debating drug liberalization.

A government-sponsored bill approved by 16-13 votes in the Senate provides for regulation of the cultivation, distribution and consumption of marijuana and is aimed at wresting the business from criminals in the small South American nation.

Cannabis consumers will be able to buy a maximum of 40 grams (1.4 ounces) each month from licensed pharmacies as long as they are Uruguayan residents over the age of 18 and registered on a government database that will monitor their monthly purchases.

When the law is implemented in 120 days, Uruguayans will be able to grow six marijuana plants in their homes a year, or as much as 480 grams (about 17 ounces), and form smoking clubs of 15 to 45 members that can grow up to 99 plants per year.

Registered drug users should be able to start buying marijuana over the counter from licensed pharmacies in April.

Uruguay’s president, Jose Mujica, defends his initiative as a bid to regulate and tax a market that already exists but is run by criminals:

“We’ve given this market as a gift to the drug traffickers and that is more destructive socially than the drug itself, because it rots the whole of society,” Mujica told Argentine news agency Telam. [1 NBC News]

Jose Mujica: “I earn more than I need”

Jose Mujica is already famous on the internet, being known as the “World’s poorest president” because he donates 90% of his salary to charity, lives in a modest house owned by his wife and drives an old VW Beetle.

Also known as Pepe Mujica, he refused to move to the luxurious house the Uruguayan state provides for its leaders, and chose instead to stay in the modest home he shares with his senator wife in the capital.

“We have sacrificed the old immaterial Gods, and now we are occupying the temple of the Market-God. He organises our economy, our politics, our habits, our lives and even provides us with rates and credit cards and gives us the appearance of happiness,” he said.

“It seems that we have been born only to consume, and to consume, and when we can no longer consume, we have a feeling of frustration and we suffer from poverty, and we are auto marginalised.” [2]

AVATAR: The History of Earth... in Reverse Previous post
Together, We Can Build a More Connected, Compassionate and Free World Next post