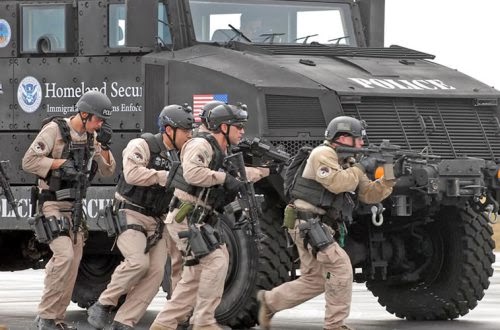 DHS Insider Warns: “Preparations Have Been Finalized to Respond to a Crisis of Unprecedented Magnitude Within the United States”

Under the cover and amid the distraction of the Christmas bustle, I had my last “official” contact with a source inside the Department of Homeland Security known as “Rosebud” in my writings.

My source is leaving his position, retiring along with numerous others choosing to leave this bureaucratic monstrosity.

For this contact, my source took unprecedented measures to be certain that our contact was far off the radar of prying government eyes and ears.

I was stunned at the lengths he employed, and even found myself somewhat annoyed by the inconvenience that his cloak-and-dagger approach caused. It was necessary, according to my source, because all department heads under FEMA and DHS are under orders to identify anyone disclosing any information for termination and potential criminal prosecution.

“DHS is like a prison environment, complete with prison snitches,” he said, referring to the search for leaks and leakers. And the warden is obsessed. Ask anyone in DHS. No one trusts anyone else and whatever sources might be left are shutting up. The threats that have been made far exceed anything I’ve ever seen. Good people are afraid for their lives and the lives of their families. We’ve all been threatened. They see the writing on the wall and are leaving. It’s not a joke and not hype.”

The following is a narrative from my source, prefaced with the instructions to “take it or leave it,” and “disregard it at your own peril.” He added that it’s now up to each American to act on the information themselves or suffer the consequences. “I’ve resigned myself to the fact that most [Americans] will never be convinced of the reality that is taking place right in front of them.”

“According to every internal document I’ve seen and read, and from the few people I’ve spoken with who understand what’s going on, preparations have been finalized to respond to a crisis of unprecedented magnitude within the United States. The response will include the use of lethal force against U.S. citizens under the instructions of Barack Obama.”  But why?

“‘It’s the economy, stupid,’” he began, paraphrasing a campaign slogan coined by James Carville for Bill Clinton’s 1992 campaign.  ”Just as I disclosed in our first meeting, the crisis will be rooted in an economic collapse. I told you last year, at a time when gold and silver were setting record highs, one specific indicator that time is very short. It is the final ‘smack down’ of the metals, gold and silver, that will presage the orchestrated economic collapse that is being planned by the bankers of Wall Street.

Everybody needs to understand that this is a deliberate collapse of the U.S. economy with the oversight of the White House and the full knowledge of the Justice Department.  Everyone seems to be waiting for some big, history making event that will signal the start of the collapse. The fact is that the collapse has already started. It’s incremental, like a snowball rolling down a hill. It gets bigger and rolls faster. Well, this snowball is well on its way down the hill.”

“I don’t mean to sound repetitive, by I can’t stress this enough. Contrary to what you hear, we’re already in an economic collapse, except that most people haven’t a clue. The ‘big bang’ comes at the end, when people they wake up one morning and can’t log in to their bank accounts, can’t use their ATM cards, and find out that their private pension funds and other assets have been confiscated,” he stated.

“I’ve seen documentation of multiple scenarios created outside of DHS. Different plans and back-up plans. Also, please understand that I deliberately used the word ‘created,’ as this is a completely manufactured event.  In the end it won’t be presented that way, which is extremely important for everyone to understand. What is coming will be blamed on some unforeseen event out of everyone’s control, that few saw coming or thought would actually happen. Then, another event will take place concurrent with this event, or immediately after it, to confuse and compound an already explosive situation.” I asked for specifics.

“As I said, there are several scenarios and I don’t know them all. I know one calls for a cyber-attack by an external threat, which will then be compounded by something far removed from everyone’s own radar. But it’s all a ruse, or a pretext. The threat is from within,” he stated. “Before people can regain their footing, a second event will be triggered.” Again, I asked for specifics.

“I’ve seen one operational plan that refers to the federal government’s response to a significant terrorist attack on U.S. soil. Information at these levels is compartmentalized. I don’t have specifics, just plans for the response. The response will be controls and restrictions on travel, business, and every aspect of our lives, especially gun ownership and speech that incites people against the government. I guess some people would call it Martial Law, and they would not be incorrect. But understand that this will be a process deployed in stages. How quickly of a process remains to be seen.”

As I said, people continue to look for something big to happen first, followed by a militaristic response by the federal government against U.S. citizens. Based on what I’ve seen, I don’t believe it will happen this way, although there is one unthinkable exception. That exception would involve a ‘decapitation’ of our leadership, but I’ve seen nothing even remotely suggestive of that. But I’ve heard and even read articles where that is mentioned. Frankly, though, that’s always been a threat. I suppose that if the leadership is deemed useless, or becomes a liability to the larger agenda in some manner,  it could happen. The precedent exists. Let’s pray that it’s not the case now.”

“I don’t think anyone except the initiated few know the precise series of events or the exact timing, just a general overview and an equally general time period. I think we’re in that period now, as DHS has their planned responses finalized. Also, the metals are important because it’s real money, not Ponzi fiat currency. The U.S. has no inventory of gold, so the prices are manipulated down to cause a sell-off of the physical assets.

China is on a buying spree of gold, and other countries want their inventory back. The very people causing the prices to drop are the ones who are also buying the metals at fire sale prices. They will emerge extremely wealthy when the prices rise after the U.S. currency becomes wallpaper. A little research will identify who these people and organizations are.”

“I’d like to add a bit of perspective that might help explain the events as I described. Do you remember former Defense Secretary Donald Rumsfeld announcing that the Pentagon was unable to account for $2.3 trillion in the defense budget? That was on September 10, 2001, the day before the attacks of 9/11.

Some suggest that 9/11 was  orchestrated, in part to cover up the missing money, which is ludicrous. The result, however, was that suddenly the accounting issue took a back seat because of the attacks. The result will be the same. That’s a perfect example of the mechanics of what we are about to experience. It’s going to take years to sort out, and when it’s finally sorted out, the damage will have long been done.”

“First, ask yourself why there was such an all out effort to marginalize anyone talking about Obama’s eligibility in 2008. Even so-called conservatives pundits fell for the lie that such questions were nothing more than a diversion. They were following a specific drumbeat. That should tell every rational adult that he is a creation of the globalists who have no allegiance to any political party.

He is the product of decades of planning, made for this very time in our history. He was selected to oversee the events I just disclosed. Who has that ability? He’s a product of our own intelligence agencies working with the globalists. He should be exhibit ‘A’ to illustrate the need to enforce the Logan Act. Need I say more?”

As often said by another of my sources, the U.S. is a captured operation. The lie is bigger than most people realize or are willing to confront. That is, until there is no other option. By then, it might be too late.

“It is with gravest concern that I write to you today concerning the recent appropriation of weapons by the Department of Homeland Security (DHS) that can only be understood as a bold threat of war by that agency, and the Obama administration, against the citizens of the United States of America,” the decorated retired Army Captain’s letter begins.

The former Army Captain cites Adolf Hitler’s rise to power as evidence of the outcome of allowing such an agency free rein, stating:

“One needs only to look to the rise of Adolf Hitler, and his associated DHS organizations, the SA and the SS, of 1932-1934, to see the outcome of allowing an agency of government this kind of control over the free citizens of a nation. The people of Germany could not have imagined, until it was too late, the danger of allowing a tyrant this kind of power. We must not be so naïve as to think it will not happen to us as well if we remain passive toward this power grab by the Marxist Obama administration!”

3 Lessons Learned in Crisis: “Within an Hour the Stores Were Emptied” Previous post
Rumor: "Microchipping" Newborns in U.S. and Europe - Are They Testing Our Reaction? Next post