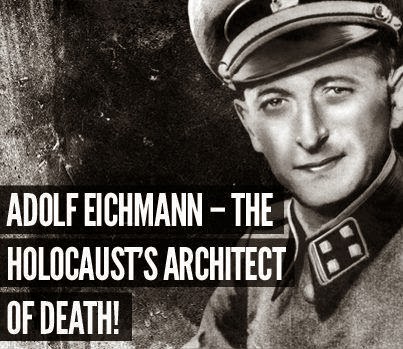 Three agents of Israel’s intelligence agency, among them the head of Mossad, Isser Harel, wrote books about how they kidnapped Eichmann from Argentina in May 1960 – a version that has never been questioned by the government of Israel. 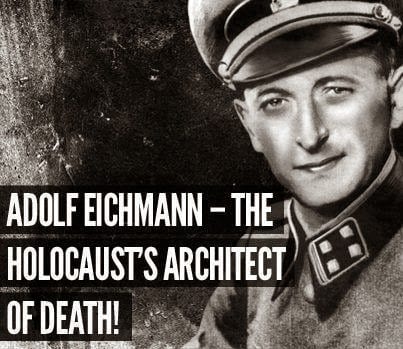 1. After years of tireless investigation, Mossad finally discovered the place where Eichmann lived in Buenos Aires. In the evening of May 11th, 1960, Mossad agents
captured him and pushed him violently in a car. The agents kept him in a safe house in Buenos Aires.

2. In the night of May 20th, Mossad agents carried Eichmann, drugged and
unconscious, through the Passport Control and Customs at the International Airport in
Buenos Aires (Ezeiza) and put him into the special aircraft of El Al (the national Israeli airline), the “Bristol Britannia”, which had earlier brought a delegation of high-ranking members of the Israeli government to Argentina.

3. The aircraft departed at midnight and arrived in Israel on May 22nd, at 7.35 am – with one stopover in Dakar.

This cannot be true.

1. Eichmann was discovered by a survivor of a Concentration Camp Lothar Hermann, an old blind man, who had emigrated to Argentina. He passed the information to the Chief Public Prosecutor in Frankfurt, Fritz Bauer, who in vain tried to convince the Government of Israel to bring Eichmann to trial in Jerusalem. Later, in March 1960, Hermann wrote to Israeli authorities:

“It seems that you have no interest to detain Eichmann”.

2. In the night of May 20th, according to Argentinean investigation, there was no man who passed drugged and unconscious through security checkpoints in the International Airport in Buenos Aires and the airplane of El Al departed in Ezeiza without Eichmann on board.

During this indispensable refuelling stopover Eichmann must have been placed on the Bristol Britannia – in the Airport of Punta del Este, named Laguna del Sauce, Uruguay. How did Eichmann come to Uruguay? What were the motives for the capture of a man who was five years on the payroll of Standard Oil? And who was that mysterious man, William Mosetti?

The man of Standard Oil, officer of Mussolini, US intelligence agent and general director of Mercedes Benz Argentina. Adolf Eichmann was working there, too.

It was in 1927, when Adolf Eichmann entered in the “Frontkämpfervereinigung” of the Nazis. He was born in 1906 in Solingen and grew up in Linz, Austria. He was educated in the same college as Adolf Hitler, the Kaiser-Franz-Josef-Realschule.

1927, the young Eichmann got an attractive job, the whole representation for the products of Vacuum Oil Company in Salzburg and Northern Tyrol, as he wrote in his curriculum vitae. He remained there five years.

In 1932, his friend Ernst Kaltenbrunner, the future head of the Reichssicherheitshauptamtes, recruited him for the Nazi Party and the SS. The Vacuum Oil Company gave him a motorcycle that he used to organize Nazi activities and his comrades in the Brown House in Linz named him “Fuehrer des Motorsturms der
Standarte”.

In June 1933, the Austrian government forbid all Nazi activities and Eichmann lost his job. The firm gave him severance pay of several months’ wages. Eichmann went to Germany and developed his career within the Nazi structure. In the SD-headquarter he organized the department for Jewish affairs.

Adolf Eichmann, SS-Obersturmbannführer and Protocol Secretary of the Wannsee Conference, hid after 1945 in Germany. He was not accused in Nuremberg. According to the information of Nazi hunter Simon Wiesenthal, he was the man in charge of saving Nazi gold and financing the escape of war criminals from Germany to Argentina.

During a secret meeting on August 10th, 1944 in Strasbourg, high ranking directors of German corporations had planned with SS-Obergruppenführer Scheid, well connected with Deutsche Bank, how to hide German capital in neutral countries:

“German industrialists must through their exports prepare themselves to finance the Nazi party which would be forced to go underground. From now on, the government would allocate large sums to industrialists, existing financial reserves in foreign countries must be placed at the disposal of the Party so that a strong German Empire can be created after the defeat.”

Argentina was offering its territory for this purpose. In 1950 Eichmann came to Buenos Aires with a passport provided by a catholic priest in Italy under the name of “Ricardo Klement.

“Eichmann came with a group of 16 other Germans and Daimler-Benz asked me to give
him a job”, says Jorge Antonio, President Juan Domingo Perón’ s right hand man.

Antonio had founded Mercedes Benz Argentina with Nazi gold in 1951.

“I knew him under his real name but it was a problem of the Germans and the Allies” – he told me in an interview.

Antonio bought as a cloak for Daimler-Benz and other German firms 60 corporations, mining companies, real estate, and agriculture. Daimler used the “savings” that they accumulated during the war in Switzerland.

To get this capital clean and in its own firm’s circulation after the war, they introduced it as money to pay import and export bills. Did he never ask himself if he was washing Nazi gold?

“With us, the Germans made a lot of money”, Antonio told me. “If you call this money laundering. I wanted a truck factory, I got the factory”.

In 1955 the military took over power in Argentina and threw out General Perón. They confiscated all of Antonio’s 60 firms , including all documentation related to bank accounts and secret bookkeeping. Antonio spent two years in jail. In 1957 the judges decided to nationalize the whole enterprise of Daimler-Benz in Argentina, without any compensation.

“The confiscated firm”, so the trial said, “could never prove the origin of the investment.”

Daimler-Benz and its main shareholder, Deutsche Bank, were afraid of loosing all “their” capital and remembered an old friend: William Mosetti. He had returned to Socony-Vacuum in 1949, now Mobil Overseas Oil Company, and was stationed in Africa.

When Daimler-Benz hired him, he was stationed in Leopoldville, Belgian Congo, and from there they sent him to Buenos Aires. And with his connections, above all to the military, he did apparently an excellent job.

In 1959, an Argentinean District Court found in favor of Daimler-Benz. Although the company could not explain where its original investment came from – there was no proof of legal entry of money to Argentina – this fact should not be considered serious enough to justify expropriation, argued the judges.

Mercedes-Benz Argentina should pay a fine and the truck factory was opened again. Mosetti hired workers, among them Ricardo Klement, alias Adolf Eichmann.

Eichmann felt safe in Argentina. He even gave taped interviews over a four year period to former SS officer Willem Sassen. On the recording one can releatedly make out the sound of the uncorking of wine bottles. Eichmann stated that he was proud of his “heroic deeds”:

“I don’t regret anything. If we would have killed 10,3 million Jews of the 10,3 million European Jews, I would be glad and say: ok, we destroyed an enemy”.

Eichmann tried to justify himself. He felt bitterness, once the master of millions of lives, now he lived in poverty without any power.

While his comrades from SS and Nazi party were making careers, he, the highest ranking Nazi representative in exile, received only some charity as a worker of Mercedes-Benz and the companies did not remember what was agreed in 1944 between the Nazi party and German industrialists in Strasbourg – to “finance the Party to create a strong German Empire after the defeat”.

Sassen tried to sell the interview to the press. And it only was a question of time before a journalist would ring at Eichmann’s door. It was inpredictable what and about whom a talkative war criminal would speak. About Hans Globke, author of the Nuremberg Race Laws and Chancellor Konrad Adenauer’s Secretary of State? About former SS comrades in corporate Germany?

On April 29th, 1960, the shareholders’ meeting of Mercedes Benz Argentina named William Mosetti General Director. And twelve days later Adolf Eichmann didn’t come back to his home. He had told his wife that he had an “important meeting”, outside of Buenos Aires and that he would be back at night.

When Eichmann did not return home that night, his wife in desperation went to the factory of Mercedes Benz the following morning. She implored former officers of the Wehrmacht to conduct a “more or less official search” – as an internal memorandum of Daimler director and former SS officer Hanns Martin Schleyer, dated May 30th, 1960, described.

On May 23rd, Premier Minister David Ben Gurion declared in the Knesset that war criminal Adolf Eichmann was in detention in Israel. He didn’t say how he had come to Israel. The version that Mossad kidnapped the war criminal from Argentina was invented first by journalists, quoting anonymous sources.

But Mosetti must have participated in handing over Eichmann to Israel. He took Klement/ Eichmann on May 12th , only one day after his disappearance, out of the Social Security System ANSeS – eleven days before Ben Gurion announced Eichmann’s capture in the Knesset. Mosetti evidently knew that Klement/ Eichmann would not return to his place of employment.

The Argentinean government started a huge investigation about violation of its sovereignty. But the results of this investigation never were published.

Neither the Argentineans nor the world knew of that little Piper-(Apache) that had a US registration number and was seen in the local airport in Eichmann’s neighbourhood, on May 11th, coming from Uruguay and returning to Uruguay on the very same day that Eichmann didn’t return to his home.

Until today, journalists have been receiving a lot of money to write books about the “kidnapping” of Eichmann by Mossad from Argentina. The deception goes on.

Related: Adolf Hitler Lived to 95 Years of Age in Brazil, According to Nazi Hunter; Source;

STOP Denmark's Annual Whale and Dolphin Slaughter - Your Help Required Previous post
Freemasonry: 'The Firm Within the Firm' Next post