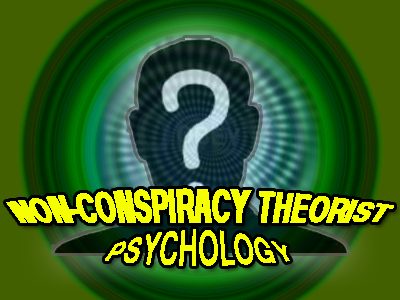 The Psychology of a “Non-Conspiracy Theorist”

There is a brand of people amongst us. They have no name but they exist. They are everywhere, at work, at home, at school, and in the streets, stores, and shopping malls. It is highly unlikely to not know someone who belongs in this category. It’s the so called non-conspiracy theorists.

You know, the guy who tries to terminate conversations by alleging that you are nothing more than a “conspiracy theorist” and the information you share is false or not believable. Yes, that guy. 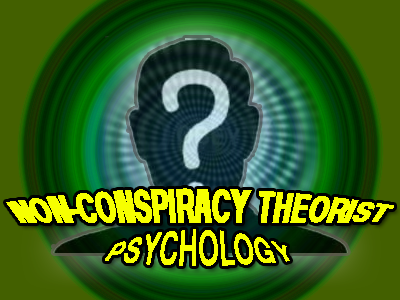 We all know them, they often are the ones who hold the “conspiracy” verbal accusation as a valid logically defined argument in and of itself.

Conspiracy theorist says: “You are claiming that fire alone can cause a building to self-implode, descend at freefall speed into its own footprint? That’s physically impossible, what about Newton’s Laws and laws of thermal dynamics and such? “

And with that, often the non-conspiracy theorist will walk away. What’s happening? They had nothing to elaborate on, so the non-conspiracy theorist – whose thinking is engineered and controlled by government, mainstream media and Hollywood entertainment – resorted to a socially engineered answer. For this reason it is fascinating to explore the mindset and psychology of the individuals who take this position in place of a logical stance.

By definition, conspiracy means a group of two or more people secretly plotting (or conspiring) a harmful (or evil) deed against another person(s). This behavior is part of human nature. Humans have been conspiring against each other since the beginning of time. There was a never a time in world history when such an elementary behavior (of conspiring against an enemy) did not exist.

Can you find a period in history when a certain human emotional trait or action didn’t exist? Was there a time when the human genome didn’t express jealousy, game playing, free trading, rage, or happiness?

As odd or ridiculous as this may sound, non-conspiracists unknowingly subscribe to this logic. If evidence points to a conspired crime, why not treat it as such? Why demonize the very concept of conspiring? This is a core defect in the thought process of non-conspiracy theorists. You can easily identify them by their speech.

What the non-conspiracy theorist doesn’t see is that the battlefield is right before them and they have outsourced all critical thought and action to a government thinking service known as mass media. Like being on the football field while the ball is in play, without realizing what is happening.

You see people waving at you in the stands to get out of the way, but you don’t understand what they are saying so you continue walking on the field with your headset on. Likewise, non-conspiracy theorists perceive all logic and reason arguments and warnings made by the conspiracy theorist as noise. They don’t understand the warning and so they continue living and carrying on with what they are doing.

Like the person on the field not understanding the warning being communicated by those in the stands, non-conspiracy theorists cannot receive the basic signals of logic and reason.

The headsets adding to the confusion is like the TV and mainstream media news. Since they themselves refuse to look at the evidence, they put their faith in the government and in the mass corporate establishment to safely guide them in their reality. They gain a sense of psychological protection from this overall system.

Since the information being believed is almost always artificial they need to hear their own opinions repeated to them by the voices on TV so they can confirm (and re-confirm) their own belief system to themselves to be legitimate. At no point will the non-conspiracy theorist plan a day of research or dedicate a few hours every once in a while to research the topic or put any thought into issues.

Information and world problems are but one category in a shelf of categories that make up their lives. The non-conspiracy theorist ignores that government has always implemented social engineering and mass mind control on the general public.

In order for the non-conspiracy theorist to confidently walk away from someone who challenges their belief system with scientific facts, they need to have a sustained comfort and assurance that what government and mainstream media is saying is true.

The non-conspiracy theorist is thus profoundly psychologically interconnected with today’s mass mind control paradigm. They are a species representing a full byproduct of 21st-century social engineering. The doctrine of this type of social engineering programs its believers to believe that when government and media accuses someone of “conspiracies” then this accusation is cause for someone being considered diseased.

The symptoms being paranoia. But paranoia is based on systematized delusions and delusions are based on false beliefs. A proper exploring of meanings brings us back to proving what is true or false. We come full circle and the spin is over.

Non-conspiracy theorists don’t realize they dwell in this circle of misapplied words, never exploring the meanings or doing the work to determine what is true and what is provable.

Non-conspiracy theorists therefore wake up every morning and reach for the mental orientation map known as mainstream media news. Without it they would be disoriented, as they would not know what to believe. They actually believe that if anyone was guilty of wrongdoing at the highest level of government someone would speak out every time and everyone would know about it.

Note, the non-conspiracy theorists use the name as a loaded, proven concept with power to permanently label someone diseased. In this case, attempting to connect the dots automatically tags you as a conspiracy theorist.

As far as non-conspiracy theorists are concerned, all critical thought is deferred to the authorities. The scientists do their work and then report the facts to the government and mainstream media who carefully announce to the masses what they should know.

Any scientists who speak out and claim to have evidence contradicting government claims must first be endorsed and approved by the mainstream media and government. Without this approval the scientists are marginalized no matter how large their numbers are. Without these ridiculous rules the delusion of being a non-conspiracy theorists cannot be maintained. This is the psychology of tyranny.

Tyranny and totalitarianism cannot be implemented without mass mind control. This dangerous group-think mentality will ignore all warning signs to help continue advancing the agenda. And so the non-conspiracy theorist is the most important instrument for maintaining control of the masses. Without these non-conspiracy theorist vessels of the global empire, the plan would not be possible.

It is quite possible that years from now the concept of conspiracy will return back to where it belongs right next to other concepts like jealousy, laughter, love, stealing, fighting, friendship, hatred and other human expressions that define who we are.

By then perhaps being a friendship theorist, a stealing theorist or a jealousy theorist will be the new propaganda bogey monster term. Or perhaps years from now we will be sick and tired of this vicious cycle of physical and mental slavery. Perhaps people will truly have enough of the control system and will have abolished it by then.

I am thrilled to be considered a “conspiracy theorist” by those still controlled by the social engineering experiments of the last one hundred or so years. We are proof that humans are able to critically think on their own and prefer to be free. We are the embodiment of the resistance, we never run from challenges and debates, we recreated the media and are responsible for the progressive death of the mainstream media. We choose to give humanity a voice outside of the socially engineered control system.

We rely on firsthand accounts, physical evidence consistent with natural laws, factual documents, common sense, high probability, and forensic scientific evidence before jumping to conclusions. We do not rely on name calling to give strength to our position and we stand as a reminder that the human mind will never be completely contained.

The mindset is: no research required if Associated Press, NBC, ABC, CBS, FOX, CNN or NPR doesn’t agree to report it, then all other sources must be false. This shines a light into the thought process of non-conspiracy theorists.

How creepy does all this sound? We often take for granted the thought process required to make someone believe how they believe and the (mainstream media believing) non-conspiracy theorist mentality is quietly as culpable for the condition of the world today as the individuals who actually carry out the crimes that have put us where we are.

Little to no effort is put by non-conspiracy theorists to learn about their own social mindsets, social engineering, group-think, and government propaganda and mind-control history.

The non-conspiracy theorists are thus arguably indirectly ushering in many of the religious and cultural prophesies of the end times and the predictions of the doomsday prophets. They are proving to be key vessels in the events that are to come. They have already carved their mark in history as supporters of the global empire.

Everyone who has played a role in supporting the global empire of the U.S. has already left their mark. Let’s all wait and see how this mental defect will play itself out and what role these non-conspiracy theorists will play in ushering in the final pieces of the global government.

Will they be rewarded? Will they support the extermination of all critical thinkers? Will it turn out the non-conspiracy theorists were expressing an alternate DNA or is this idea too far out? Will it turn out they were all part of a larger experiment? Will the final waking up process or critical mass be stomped out by this core of non-conspiracy theorists who blindly believe government-programmed lies? Or will they be responsible for delaying critical mass by a certain amount of time?

These and many other questions will be answered in the next few years/decades. Let us not forget the layers of defective logic and blind faith in government required to be considered a non-conspiracy theorist. It sounds bizarre but it’s true.

It’s been said that in times of mass deceit that telling the truth is a revolutionary act; this has never been more apparent. Want to make an impact on others? Want to be a giant among men? Then tell the truth and watch the sheep run. There is so much deceit in today’s world that if you blindly reverse everything government and mainstream media says, just by default you would be closer to truth than if you believed even some of what they say.

Remember the non-conspiracy theorist who says “someone would have spoken out”? We’ve all heard this excuse. Of course, someone always does speak out; only they call those who speak out, no matter how high in government they are, conspiracy theorists, instead of someone who is speaking out or blowing the whistle.

It’s time to memorialize the web of non-logic that qualifies a non-conspiracy theorist and not take for granted what these individuals mean to our battle for freedom and what key role they will play in the final lockdown of what was once a beacon for freedom throughout the world.

Even as each of us carries on every day it’s difficult to fathom how the average person you come across who is a non-conspiracy theorist is having such a massive impact on millions of people globally and the direction of humanity as a whole including the overall survival of the human race.

524 Feet High Structure on Mars! Previous post
The man who lives in a tree, doesn't wear shoes, and brushes his teeth with a pinecone Next post