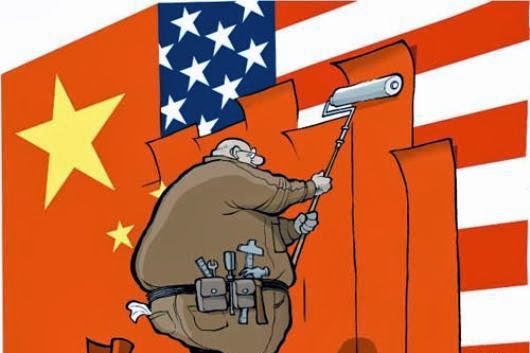 US Citizens Are Almost Chinese Slaves

As Mark Twain once said, “There are lies and there are damn lies”. There is a rumor floating around the internet and it has gone viral.

The rumor states that when Hillary Clinton went to China, she pledged the ownership of our homes as collateral to the Chinese so that they would continue to purchase our debt.

What Are the Chinese Purchasing?

Before I subscribe to this rumor, I would like to know which debt the rumor is referring to. Is the debt consist of the United States selling 17 trillion dollars in budget debt and the Chinese are purchasing that debt? 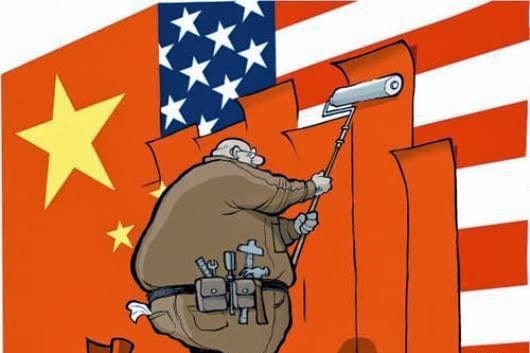 Would the purchased debt consist of the unfunded liabilities debt totaling 240 trillion dollars? Or, would the Chinese be so kind as to purchase the really big debt of 1.5 quadrillion dollars of derivatives debt created by the bankster Ponzi schemes gone bad?

Are the Chinese just plain stupid or are they just dumb like a fox?

Ask yourself, why would the Chinese ever purchase our derivatives debt of 1.5 quadrillion dollars when the entire GDP of the planet is only 65 trillion dollars? We can safely assume that the Chinese are not insane enough to purchase this debt.

It is a certainty that the Chinese did not purchase the unfunded liabilities debt of 240 trillion dollars for the same reasons that they would not purchase the derivatives debt in that there is no way to ever pay this debt off.

If I put on my tinfoil conspiracy hat, I might suggest that the Chinese would purchase the derivatives debt and/or the unfunded liabilities debt as a means to declare eminent domain over all US property.

Following the transfer of all American deeds, the Chinese could boldly do what our Congress should have done decades ago, repudiate this debt owed to the central banksters. But  I almost forgot, there is going to be no repudiation of the debt because the Chinese are playing for the same team as the Russians and the Obama administration, namely, the Bastards from Basel.

And then finally, there is the notion that the Chinese would be dumb enough to even purchase our 17 trillion dollar debt. Why would any country purchase a debt from a single country when that debt is more than 25% of the entire value of the planet? In this scenario, where is the return on investment? This would be a totally foolish financial move by the Chinese and just the simple math alone, would suggest that this is not true.

Yet, the Chinese are still purchasing our debt, why? And I have to agree with the rumor mongers about one thing, there is something of ours that is of enough value to get the Chinese to continue to throw good money after bad. And there is that trip that Clinton took to China and she did come away with a guarantee that the Chinese would continue purchase our debt.

In other words, this internet rumor, regarding the collateralizing our homes, does indeed have some basis in fact because something is collateralizing the Chinese actions as they continue to bail out water on a sinking ship with no hope of realizing a return on investment from a monetary standpoint.

The fact does remain that Secretary of State Hillary Clinton did indeed go to China for the express purpose of convincing the Chinese to continue to purchase our debt. With our economy in the mess that it is in, that had to be one tough sell. There can be no question that the Chinese had to be promised something really, really, really big to continue investing in the sinking American economy.

I completely understand why many people would jump to the conclusion that Clinton pledged the homes of American citizens. However, this has never been legislation or adjudicated. Private debt is not public debt and the United States government has taken no overt legislative action, nor have Executive Orders been issued to this effect.

Therefore when the State Department says there is “no factual basis” to an Internet rumor that went viral over the weekend claiming Secretary of State Hillary Clinton was willing to pledge American homes to China as collateral for Beijing buying the U.S. debt, I believe the government.

There is one thing that I will say in defense of our criminal enterprise government, they at least try to appear to have the power of law behind them in everything that they do. In other words, they do legitimize tyranny and make it sound so legal. For example, they can force you to buy Obamacare by calling it a tax. They spy on our every move by saying it is for our safety and that they can only do so by having to violate our rights.

Therefore, if the Chinese were going to be granted the authority to seize our homes, we would see some legal justification for such an action. Still, there can be no doubt that Clinton had to pledge something to get something from the Chinese. What could be big enough that the Chinese would be willing take on a 17 trillion dollar debt with no hope of repayment? Let’s examine some possibilities which have already been legitimized by the actions of the rogue Obama administration.

America is Not Broke as America Has Buried Treasure

Far beneath the ground, the federal government owns the rights to mineral and energy leases, from which they receive royalties, rents, and bonus payments, states the Institute for Energy Research, an industry group. According to their estimates, the government states that the assets are worth $128 trillion. That’s almost eight times the national debt.

Further, the unleashing of these assets would reduce the costs of energy for consumers and businesses.  Now, the owners of the utilities, the same people who are the owners of the oil companies, could not permit that. The utilities have invested billions toward the installation of smart meters and a new infrastructure  smart grid, in which they control all energy pricing. 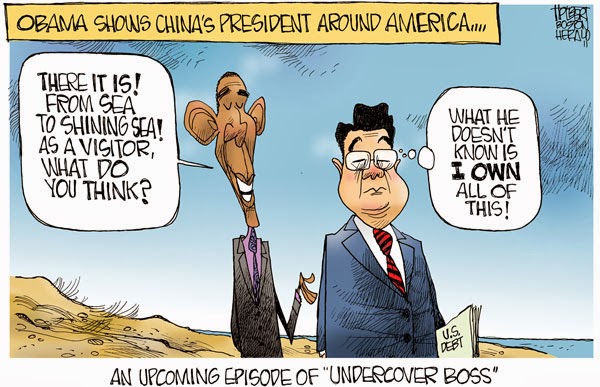 Another factor that comes into play on why these assets are not being unleashed is because plentiful, reliable and cheap energy supplies would greatly accelerate economic growth and jump start the economy out of the doldrums. But when the globalists’ goal is the creation of a one world economic system controlled by a tyrannical one world government, the old government and economy must be brought down and this economic boon to the economy cannot be allowed to transpire.

Therefore, the government acts as a procurement agent for the Chinese, who will eventually unleash these assets to themselves, after the collapse of the dollar. However, if I was taking on a debt the size of the United States, I would think bigger.

There is no doubt that the Chinese are being granted authority to control our international inland ports in which eventually all commerce will flow through. If the Chinese own the Inland Ports, then they own the American trade system, by default. This is a likely asset that would have been pledged by Clinton. However, if I was taking on a debt the size of the United States, I would think bigger.

All Material and Human Capital

I have written extensively on Executive Order 13603. This EO sets up the most draconian martial law authority on the planet. Literally, everything is controlled by the government. All food, all industry, all energy and you are controlled by the President. The interesting thing about EO 13603 is that does not require an emergency declaration to be acted upon.

A review of EO 13603 reveals that Obama not only can seize every material asset in the country, he can seize you and your family and assign anyone and everyone to duties of his choosing.

EO 13603 is the whole enchilada. I have written four articles on different aspects of EO 13603 and I would suggest that everyone spend some time Googling this EO and come to your own conclusions.

I think there is no doubt that it would take this type of pledge to keep the Chinese from withdrawing their support and it would be a good deal for them. If I could own all of America, including its people, in perpetuity, I would certainly make the deal the Chinese have apparently made with Hillary Clinton.

Handing over all capital resources to the Chinese, including human capital, makes a great deal of sense because this is the one thing that Clinton could have pledged which might have convinced the Chinese to continue to purchase our out-of-control-debt. If only our homes had been pledged to the Chinese as collateral for their investment in our debt, that would have been the deal of the century for all Americans.

We need to demand the full scope of what Clinton pledged to the Chinese. And as a man, I say this to all of you: If this possibility is not enough to get you to realize that you have no choice but to get into this fight, then nothing will and maybe then, we do deserve to be China’s slave colony!

WikiLeaks: There's a Secret Agreement to Sacrifice Wildlife and Environment Previous post
'Superhabitable' Planets May Exist in Nearby Solar Systems Next post