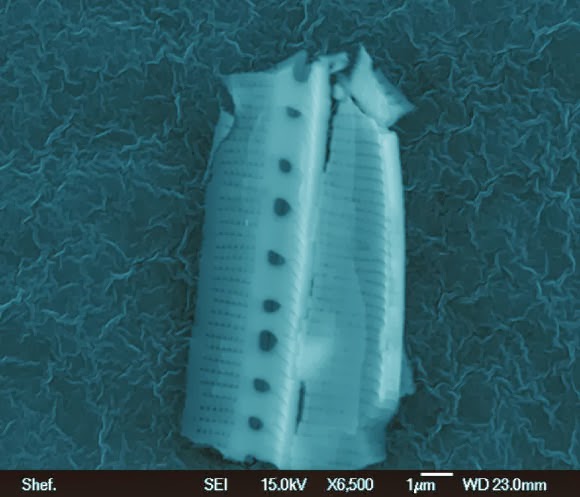 British astrobiologists are claiming to have found extraterrestrial life form in the Earth’s stratosphere. They collected a small diatom frustule that could have come from space after sending a balloon to 27 km into the stratosphere during the recent Perseid meteor shower.

The balloon was launched near Chester, UK, and carried microscope studs which were only exposed to the atmosphere when the balloon reached heights of between 22 and 27 km.

The balloon landed safely and intact near Wakefield, UK. The scientists then discovered that they had captured a diatom fragment and some unusual biological entities from the stratosphere, all of which are too large to have come from Earth.

“Most people will assume that these biological particles must have just drifted up to the stratosphere from Earth, but it is generally accepted that a particle of the size found cannot be lifted from Earth to heights of, for example, 27 km. The only known exception is by a violent volcanic eruption, none of which occurred within three years of the sampling trip,” explained Prof Milton Wainwright from the University of Sheffield, who is a lead author of a paper reporting the discovery in the Journal of Cosmology (full paper).

“In the absence of a mechanism by which large particles like these can be transported to the stratosphere we can only conclude that the biological entities originated from space. Our conclusion then is that life is continually arriving to Earth from space, life is not restricted to this planet and it almost certainly did not originate here.

“If life does continue to arrive from space then we have to completely change our view of biology and evolution. New textbooks will have to be written!”

The team is hoping to extend and confirm their results by carrying out the test again in October 2013 to coincide with the upcoming Haley’s Comet-associated meteorite shower when there will be large amounts of cosmic dust. It is hoped that more new, or unusual, organisms will be found.

“Of course it will be argued that there must be an, as yet, unknown mechanism for transferring large particles from Earth to the high stratosphere, but we stand by our conclusions. The absolutely crucial experiment will come when we do what is called ‘isotope fractionation’.

“We will take some of the samples which we have isolated from the stratosphere and introduce them into a complex machine – a button will be pressed. If the ratio of certain isotopes gives one number then our organisms are from Earth, if it gives another, then they are from space. The tension will obviously be almost impossible to live with!” Prof Wainwright said.

Fukushima Was an Inside Job: The Sabotage Exposed Previous post
Young Man Claims He Was Required to Sacrifice a Child as Initiation to an Elitist Masonic Lodge Next post