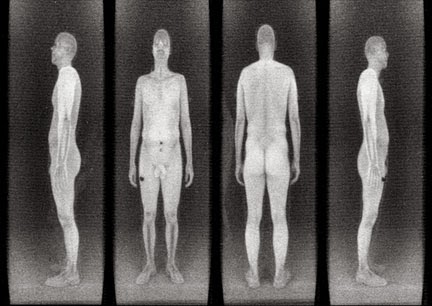 For the last few years, federal agencies have defended body scanning by insisting that all images will be discarded as soon as they’re viewed.

Now it turns out that some police agencies are storing the controversial images after all.

The U.S. Marshals Service admitted this week that it had surreptitiously saved tens of thousands of images recorded with a millimeter wave system at the security checkpoint of a single Florida courthouse.

This follows an earlier disclosure (PDF) by the TSA that it requires all airport body scanners it purchases to be able to store and transmit images for “testing, training, and evaluation purposes.” The agency says, however, that those capabilities are not normally activated when the devices are installed at airports. 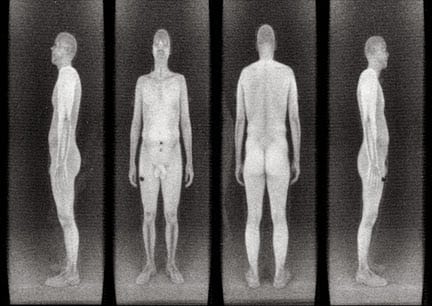 This privacy debate, which has been simmering since the days of the Bush administration, came to a boil two weeks ago when Homeland Security Secretary Janet Napolitano announced that scanners would soon appear at virtually every major airport. The updated list includes airports in New York City, Dallas, Washington, Miami, San Francisco, Seattle, and Philadelphia.

The Electronic Privacy Information Center, a Washington, D.C.-based advocacy group, has filed a lawsuit asking a federal judge to grant an immediate injunction pulling the plug on TSA’s body scanning program. In a separate lawsuit, EPIC obtained a letter (PDF) from the Marshals Service, part of the Justice Department, and released it on Tuesday afternoon.

These “devices are designed and deployed in a way that allows the images to be routinely stored and recorded, which is exactly what the Marshals Service is doing,” EPIC executive director Marc Rotenberg told CNET. “We think it’s significant.”

William Bordley, an associate general counsel with the Marshals Service, acknowledged in the letter that “approximately 35,314 images…have been stored on the Brijot Gen2 machine” used in the Orlando, Fla. federal courthouse. In addition, Bordley wrote, a Millivision machine was tested in the Washington, D.C. federal courthouse but it was sent back to the manufacturer, which now apparently possesses the image database.

The Gen 2 machine, manufactured by Brijot of Lake Mary, Fla., uses a millimeter wave radiometer and accompanying video camera to store up to 40,000 images and records. Brijot boasts that it can even be operated remotely:

“The Gen 2 detection engine capability eliminates the need for constant user observation and local operation for effective monitoring. Using our APIs, instantly connect to your units from a remote location via the Brijot Client interface.”

This trickle of disclosures about the true capabilities of body scanners — and how they’re being used in practice — is probably what alarms privacy advocates more than anything else.

A 70-page document (PDF) showing the TSA’s procurement specifications, classified as “sensitive security information,” says that in some modes the scanner must “allow exporting of image data in real time” and provide a mechanism for “high-speed transfer of image data” over the network.

(It also says that image filters will “protect the identity, modesty, and privacy of the passenger”).

“TSA is not being straightforward with the public about the capabilities of these devices,” Rotenberg said. “This is the Department of Homeland Security subjecting every U.S. traveler to an intrusive search that can be recorded without any suspicion — I think it’s outrageous.”

EPIC’s lawsuit says that the TSA should have announced formal regulations, and argues that the body scanners violate the Fourth Amendment, which prohibits “unreasonable” searches.

Everything 'They' Tell Us, is a Lie - The Evidence Previous post
12 Natural Remedies for Diabetes Next post