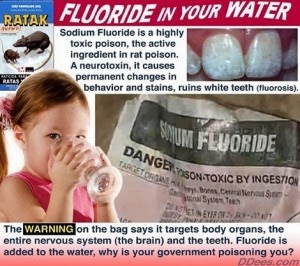 One of the most surprising absurdities of our times is the continuing practice of fluoridating our water supply and supplementing dental and oral healthcare products with this toxic by-product of the aluminum industry.

The evidence demonstrating the harmfulness of this is beyond abundant, and the case against fluoride continues to grow.

Across the United States the movement against this wholesale poisoning of our people and the creatures downstream also continues to grow, in tandem it seems with even more research studies and scientific evidence further proving that fluoride is a grave public health issue. 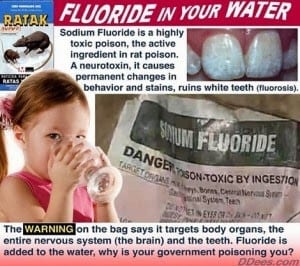 The history and known dangers of fluoridation is easy to find and easy to digest online, however, each new study warrants media, or alternative media, attention because for some odd reason mass public opinion on this issue is critically slow to tip in favor of non-fluoridation.

Recently, even more evidence has been gathered and distributed by researchers, this time showing how fluoride severely damages the neurological development of the most vulnerable and important members of our society, our children.

Consider this, an opening statement from an article by the Harvard School of Public Health:

“In a meta-analysis, researchers from Harvard School of Public Health (HSPH) and China Medical University in Shenyang for the first time combined 27 studies and found strong indications that fluoride may adversely affect cognitive development in children.” [Source]

The article goes on to attribute the reduction and loss of IQ and impeded cognitive development to exposure to fluoride at an early age:

“They then analyzed possible associations with IQ measures in more than 8,000 children of school age; all but one study suggested that high fluoride content in water may negatively affect cognitive development.

“The average loss in IQ was reported as a standardized weighted mean difference of 0.45, which would be approximately equivalent to seven IQ points for commonly used IQ scores with a standard deviation of 15.*

“Some studies suggested that even slightly increased fluoride exposure could be toxic to the brain. Thus, children in high-fluoride areas had significantly lower IQ scores than those who lived in low-fluoride areas. The children studied were up to 14 years of age, but the investigators speculate that any toxic effect on brain development may have happened earlier, and that the brain may not be fully capable of compensating for the toxicity.

“Fluoride seems to fit in with lead, mercury, and other poisons that cause chemical brain drain,” Grandjean says. “The effect of each toxicant may seem small, but the combined damage on a population scale can be serious, especially because the brain power of the next generation is crucial to all of us.” [Source]

In the actual study cited in this article, the case is made that fluoridation of children begins even before birth as this toxin is passed to fetuses during pregnancy:

“Fluoride readily crosses the placenta (Agency for Toxic Substances and Disease Registry 2003). Fluoride exposure to the developing brain, which is much more susceptible to injury caused by toxicants than is the mature brain, may possibly lead to permanent damage (Grandjean and Landrigan 2006).” [Source]

According to this research, fluoride attacks the developing brains of our most precious resource, our children, before they even have a chance to breath air for the first time. Given the rapidly changing social climate in the United States, where nearly 70 million Americans are already taking mind-altering drugs, and the nature of socialized crime is evolving into an alarming pack trend, it is way past time that we search for the genuine roots of mental illness in our society.

Some extremely important questions to consider after reviewing evidence of this nature are:

Professional and official disagreement on the dangers and supposed benefits of fluoridation has been ongoing for decades, and so far the majority decision has largely been to err on the side of fluoridation for some baffling reason.

This could perhaps be due to a greater elitist conspiracy to poison and ‘dumb down’ the population as many suspect and support with authentic research, or it may also be in part due to the natural inertia of the human mind that when once deceived prefers to remain deceived so as not to disrupt the cognitive stability it derives from working in familiar patterns.

Read related: Outrageous! Parents Should Use Fluoride Toothpaste on 12-Month-Olds, According to New ADA Recommendations;

Perhaps we just have a collective arrogance about us that forbids us to admit when we’re wrong, or even more frighteningly, perhaps we’re already a society that has been so severely affected by fluoridation that we no longer have the intelligence to resolve this crisis.

Whatever the case, it’s a moot point because while we mull over the issue, debating this or that, the mass poisoning of our children continues.

Here are some basic steps that you can take to reduce you and your children’s intake of this poison:

Read related: The Tulsi Plant Can Be Used To Remove Fluoride From Drinking Water;

Please share this information far and wide, and focus your intention and will power on the hopes of a future where we are smart enough to first err on the side of caution, and we remove this clearly toxic substance from our food and water supply.

About the author: Alex Pietrowski is an artist and writer concerned with preserving good health and the basic freedom to enjoy a healthy lifestyle. He is a staff writer for WakingTimes.com and an avid student of Yoga and life.