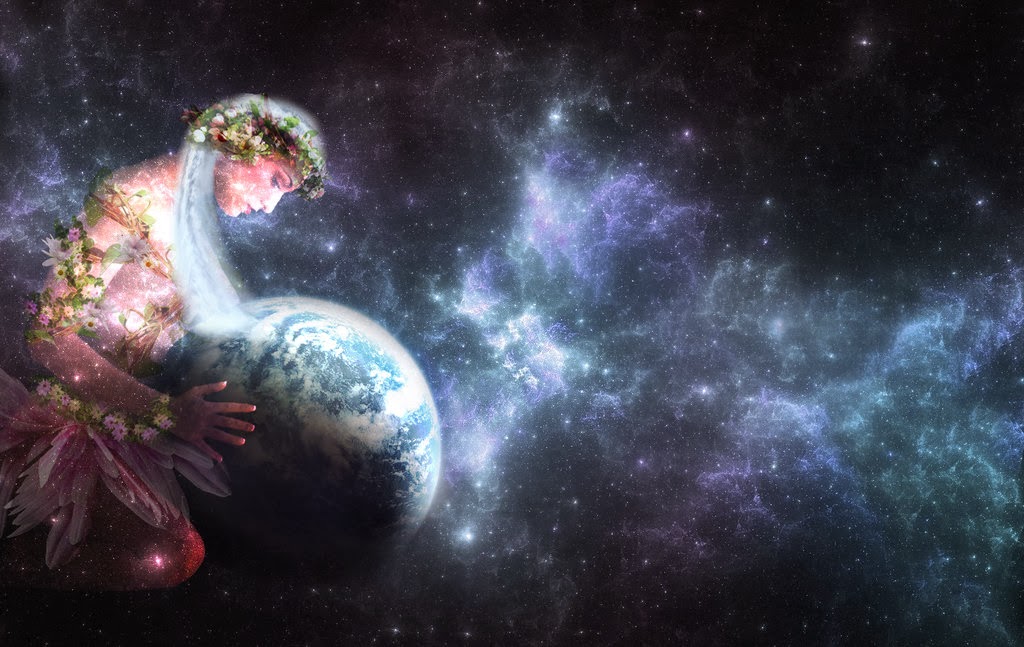 Mother Earth and Her Children

If God is my Father, who is my Mother?

My Mother is called Earth or the more popular/obscure name given to her: Gaia. Why do I call Earth my mother? Is Earth not the planet I am living on? Yes, she is the planet but to understand why she is called my mother, we have to go right back to the beginning of time when Creator made man. On that day and hour He spoke and said, “Let us make man in our image and to our likeness”.

To whom did he speak? Well, definitely not to the “Son” of God or the “Word”. No, he spoke to Earth, whom he had just made. What he meant by making man in his image was that man would receive the breath of life, which we call the Soul of Being; and that man was to be made in the likeness of Earth. So he took from the soil of Earth, added water to it and formed a man-figure of clay. When he had done, he breathed into his nostrils the breath of life, i.e. the image of God, and man became a living soul. 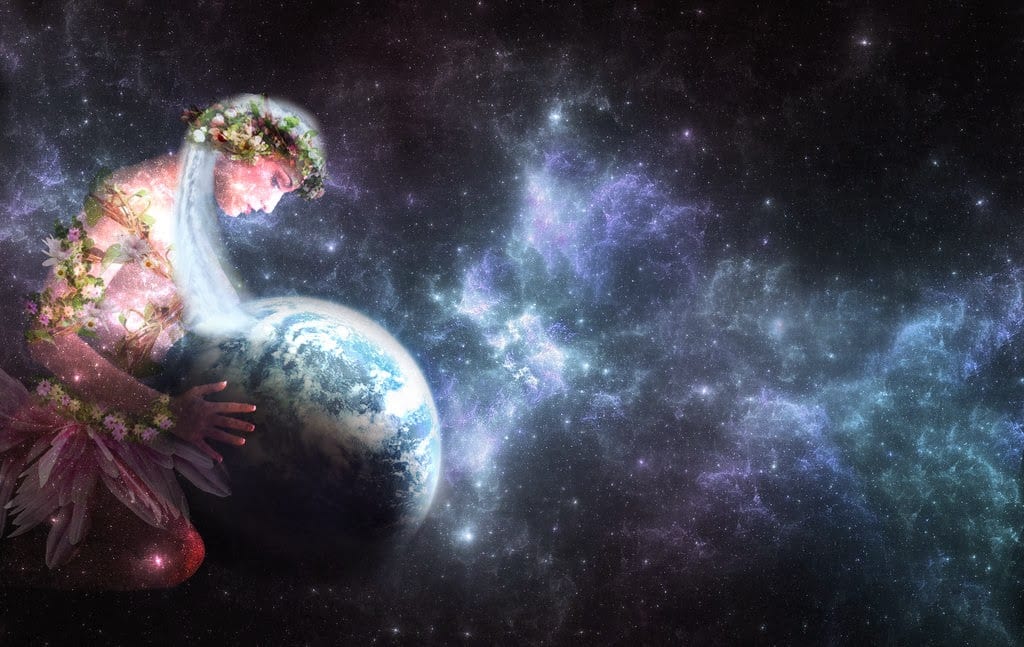 We have heard it said that man is composed of soul, body and spirit. Now, if man when he was created, received as his body the dust of the earth and as his soul the breath of God, what then is his spirit? Remember that Creator formed man from the dust of Earth and to make a figure of clay, he added water to it. This water was part of Earth and came out of Earth.

In spiritual language water is symbolic of spirit and so we can ascertain that the spirit of man is the water of Earth. The man that Creator formed was to be “the image of God, the tzelem Elohim (in Hebrew). The word Salmu, which is a cognate of tzelem, is a term we know from Mesopotamian inscriptions, where the king is the ‘image’ of the god. It means the avatar of God on earth, the one who keeps everything going properly.” [1]

As an example, let me illustrate an embryo within the womb of its mother, where it forms for nine months until the day of its birth. This embryo starts as an egg fructified by a male sperm – these two constitute the DNA of the embryo that will become an offspring. In the same way did Creator fructify the egg cell of Earth with his male sperm, the Water of Life and within Earth lay dormant the prototype that would be formed into a human shape. Once formed by the hand of Creator, this human received the Soul of Being and thus was his DNA formed – a DNA constituted of the genes of both Creator and Earth.

There we have it: Man consisting of spirit, soul and body! Man who has as his father the Creator and as his Mother, Earth who herself was “created as a fertile, self-sustaining unit – this is the way that earth was created and this is the way it remains if it is not interfered with” [Ibid].  This is a man, a human being, and a potential avatar (incarnation) of God.

How was Earth made?

Why Creator wants an earth, we have no idea says one author. Do we really have no idea? We can form an idea, can we not? We who were made in his image, his avatars?

The planet we humans live on exists for us in the third dimension. This dimension is surrounded by the 4th dimension and if we could perceive it, it lies above and underneath us. The Fourth Dimension is called Middle Earth and in the lingua franca of those who dwell there, it is commonly called the In-Between.

Middle Earth does not consist of only water. No, it as the “Garden of the Lord” – an expression mentioned in Genesis 13:10. There is life in abundance from every specie of fruit tree, herbs, cattle, beasts of the field, fish and birds. And, there are people there. Where do these people come from? Originally from the surface of the earth where we are now dwelling. They are called in folklore the people of the Fae.

Their task is to tend the Garden in their dimension, the 4th, for one day soon according to the timetable of the eons, Middle Earth will once again become the surface of the earth when the New Earth is born. In this Middle Earth sunlight is filtered through the foliage of the great forest trees, making it a place of shades and shadows.

Apart from the surface of the earth that we perceive as the 3rd dimension and Middle Earth in the 4th dimension, Earth also has deep within her, deeper than “…the great deep…” the 2nd dimension where dwell the Reptillians in a place erroneously called Hollow Earth. This location is only hollow because it was made hollow by those who dwell there for they cannot abide in either the light from the natural sun on the surface of the earth or the light from Creator and his avatars.

Middle Earth and “Hollow Earth” are what is called the spirit world, for both are also the place where the spirit of dead humans go. [*See article called A Populated Universe]

Why do Dwellers of Earth need a Soul?

We can rightfully ask that if Earth gives man his body and spirit, why then does he/she need a soul?

*Note: this description was channeled during meditation by the one I call Avatar, whose name when on earth was Yahshua or Jesus, according to the Church.

According to many spiritual teachers, all human beings are, in reality, spiritual beings or souls on a journey of probation.

We are reincarnated souls that have to evolve to a state of harmonious perfection, where we choose to hate evil and love good; to be tranquil and in harmony with the rest of the Universe; and to love the Creator above all with a universal love so that, when this state has been achieved, Creator knows that, that soul will never deflect from His purpose for their existences and therefore will he ensure that they will never lose his grace.

The ultimate aim is for souls to become fully conscious and capable as unique individual expressions of Creator, the Source of all that is. The soul’s journey is a process of evolving, which means steadily progressing through different levels or stages of consciousness. We grow in consciousness through the taking on of challenging experiences in physical form.

“Why would a perfectly happy spiritual being decide to inhabit the physical realm with all of its limitations and difficulties? Ah, but it is not we who decide but Source or Creator. It is so that we can experience the state of what feels like total separation from Source and only by going into this physically separated human form, can we learn who we are and how are we to become all that we are supposed to be.” [2]

As we have seen in the former paragraph, the one who made the soul, is Creator or Source of All that Is. Creator requires from every spiritual being, whether from the perfected beings we call avatars residing  in the “heavens above”, inhabitants of other planets and dimensions, or from the earth below as earth spirits, to undergo a period of probation. This probation falls out in what we call free will. Free will is an essential constituent of every spiritual nature, whether divine, ‘angelic’ or human. Every being that is endowed with reason is also endowed with free will. Consequently an ‘angelic’ nature endowed with reason and intelligence, is also equipped with freedom of choice.” [3]

This state of probation is necessarily a state of faith and not of vision, of merit and not of reward, in that such souls are free to choose between good and evil, light and darkness. Souls are free to choose to follow their life’s path according to the purpose of the divine will, which resides within them by way of their inherent sense of purpose – our divine destiny of flowing towards the absolute universal harmony,

“Sense of purpose arises from the pull-back to the Source of life itself; it is a pull back to ever higher degrees of unity and oneness, which manifests as a yearning to fully express the memory of the original condition of absolute oneness with creation and the universe, with the Source of All that Is. This is what defines and shapes the soul, an inherent divine sense of purpose, direction and destiny.

This infusion of the soul with the pull to a higher sense of unity defines every thought, emotion and action that takes place both in the macrocosm of the universe and the microcosm of our daily lives. All our choices are defined by this simple underlying dynamic, witnessed in the struggle within each person to overcome personality distortions that allows us to make choices which are not at one with our soul’s purpose.” [4]

Until we are enlightened, we all have distortions; until we have awakened we will sleep soundly within the microcosm that is ourselves and our environment or milieu.

“We have temporarily at least, taken on a false self-identity (ego) within the free flowing nature of the universe. In order to find this internal re-alignment, we have to recognize the contradictory flows of consciousness within which currents of attachment are created that trap the soul inside of them. These currents or distortions arise from the conditioning of our upbringing and society; they emanate from fixed beliefs, ideas, dogmas and repetitive ways of doing things.” [5]

By Caeli Francisco, HumansAreFree.com;
*Note from the author: The information contained in this article was channeled to me by Gaia herself.

7 Rules to Live 100+ Years, Learned From Those Who Did Previous post
Scientific Study: Wheat Cuts-off Blood Flow to the Brain's Frontal Cortex Next post