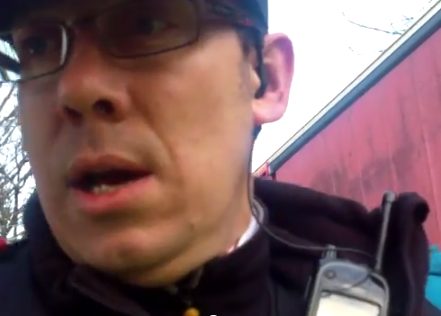 Police officers are now shamelessly used as bodyguards for the big corporations, all over the planet. They are no longer – if ever – serving and protecting the citizens, as officially intended.

So, my advice is, know your rights and open your smartphone’s camera when approached by police.

You do have the right to film police officers in public places and it may very well help you win a case in court, or even save your life.

The following video takes place during an anti-fracking protest in UK, and you will see the Police forces protecting and serving the interests of the big corporations, while hurting the innocent people who pay for their salaries and protest for a good cause. Not only that, but they also shamelessly FRAMED and arrested one of the protesters. Luckily, he got everything on camera.

Watch this video, and prepare to be amazed. It’s an extraordinary sight, especially when it’s caught on camera…

This incident took place at Barton Moss, near Manchester, England, on the site of a peaceful anti-fracking protest.

The UK police officer shown in this video has been caught red-handed on a power-trip gone too far, or so it seemed. What eventually transpired was even worse than that.

First the officer in question (pictured below) clearly shoves the cameraman knocking him to the ground — and appears unbothered by what he has done, but he’s only getting warmed up.

Not content to merely to harass and intimidate (that’s come to be expected by police in the new corporate security state), he then attempts to frame the man filming on a fake DUI charge — only the victim was actually a pedestrian walking on a public footpath. 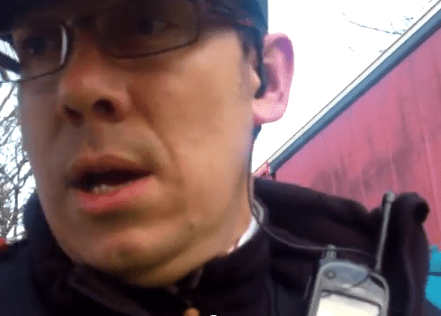 MISCARRIAGE OF JUSTICE: If you see this officer at a campsite, steer well clear of him.

It’s clear from this footage that the videographer was targeted by this crazed copper because police didn’t want him filming them as they roughed-up peaceful protesters (since police appear to be able to wipe their conscious while playing the role of corporate thug, they don’t like the idea of being filmed at their worst).

After lying on camera claiming that the innocent man filming “already admitted to having a drink”, this shameful police officer then hands the victim over to two new police officers who threaten arrest if the victim does not consent to giving a roadside breathalyzer test. The victim then refuses and the two brainless police officers proceed to place the victim under arrest.

The second two police officers will probably give a predictable ’pass-the-buck’ excuse like, ‘we were just doing our job – we were told that the man handed over to us had been drinking and driving’. But they didn’t bother to question the fantastic accusations of first dodgy copper.

Worse, the second two officers were so dumb, they didn’t even consider checking to see if the man actually owned a motor vehicle in the first place. Still, they still arrested him anyway. Straight out of Keystone Cops, only these two are real.

The facts stand, and one only needs to view this short 6 min video to learn that this cameraman was not breaking any laws – while the police broke many laws:

Can the public afford to have officers who cannot actually think for themselves? Answer: no.

Can the establishment or the fracking corporations afford it? Answer: absolutely. They prefer it.

Just how arrogant, or stupid, is this willfully deceitful police ‘officer’ really? And to do it in full view and on camera? Incredible, on all counts. The police in this video seem to enjoy preying on weaker, non-threatening members of the public. We have to ask ourselves why this is? Is it a psychological condition? Whatever it is, it’s clearly institutionalized.

Secondly, after viewing the footage, the public should ask themselves, if this first policeman is ready to break such a fundamental tenet of law enforcement conduct – like falsifying evidence and testimony, then what else is he capable of? Perhaps, bribery, ‘looking the other way’, covering-up an investigation, or worse? It’s a fair question.

As bad as these police are, it’s even worse that they are essentially acting on behalf of a powerful energy ‘fracking’ consortium whose board members are firmly embedded inside central government…

Our recommendation: the first copper should be sacked or indicted. Clearly, he is low-empathy individual who does not appear to be mentally equipped to interface with the public in a sensitive situation. His skill-set is better suited as a nightclub bouncer (mind you, we have seen bouncers who handle themselves much better than this cop).

The second two police need re-training or maybe transferred to work the gate at HM Prisons (assuming they pass grade for that job).

My Experience With a "Leap of Faith" Previous post
Stonehenge-like Circles Are Yet Another Planetary Mystery: Thousands Throughout the World Next post