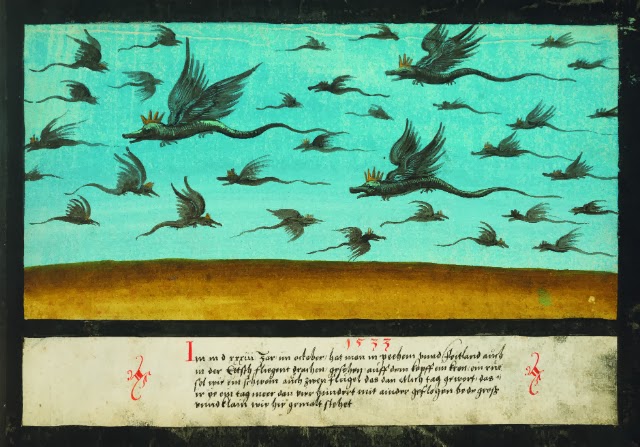 In 1533, hundreds of dragons were reported to darken the skies over Bohemia, following a 1506 sighting of a blinding bright comet slicing over the sky.

In the 16th century a diligent scribe and artist chronicled these and other portents of woe in a book that was only rediscovered a few years ago.

The book with its 169 pages and vibrant illustrations was surprisingly intact when it went to auction in 2007 in Munich, and after it was sold to James Faber, a London-based dealer, it was revealed to be even more mysterious than previously believed, and about a century older. Now Taschen has recently published an edition of The Book of Miracles, so anyone can brood over its strange contents.

The book dates to the 1550s in the Swabian Imperial Free City of Augsburg, now part of the Bavarian region of Germany. As a clever touch, the Taschen version also includes the reverse sides of each gouache and watercolor image with its scrawled description, and it’s all preceded by art historical essays by Till-Holger Borchert and Joshua P. Waterman.

This Friday at Arader Gallery on Madison Avenue in Manhattan, there’s a launch of the book with a presentation by Borchert, who serves as the chief curator at the Groeninge Museum in Bruges.

Despite their age, the visuals feel oddly recent, like something that could have come out of the Symbolist movement with its vibrant embrace of the fantastic. No one knows who commissioned the book’s creation, or why, but it reads like a registry of horror.

In comparison to the horse-headed “Tiber monster” with scaled skin, one hoof, one bird leg, a shrieking dragon tail, a strange bazooka-like snout arm, and a human face growing out of its backside, those Bohemian dragons sporting crowns seem like happy fantasies. Meanwhile the very real destruction of Lisbon by an earthquake is accompanied by a startling whale roaring up from the waves.

Elsewhere are ravenous beasts, foreboding visions in the sky, and plenty of fires. The creator often seems to be conflating reported incidents, but also trying to connect them, like an early conspiracy theorist plotting the lines to a certain impending doom.

The terrifying tale is bookended by Noah’s Ark and proceeds all the way to the apocalypse as foretold by the Book of Revelation. In fact, despite all the frenzy of unbelievable sights, The Book of Miracles‘ anxiety is very much based in the real religious tension happening in Europe in the 16th century. As Ben Marks at Collectors Weekly surmises:

“Germany’s 16th-century Protestants were also motivated by religious antipathy toward the Catholic Church, whose Pope they derided as the Antichrist. Some took the epithet for fact: For them, since the end was nigh, it behooved one to pay attention to the signs.”

Still, it’s interesting that the creators behind The Book of Miracles didn’t focus on the actual alarming news happening around the continent, like plagues and political turmoil.

Astral events and natural disasters do make appearances, with the aforementioned earthquake as well as hellish hail storms and floods, but it’s always with a heavy amount of hallucinatory whimsy.

Related: Box of Otherworldly Notes and Sketches Found in the Trash: Aliens, UFOs, Maps and More;

Yet it’s not unlike what was happening with all areas of life, from exploration to science, where with more and more uncovered in the world from new species to new lands, anything seemed possible. Even the approaching end of the world.

The Book of Miracles is available from Taschen. A launch for the book is this Friday, January 24, 6 – 8 pm at Arader Gallery (1016 Madison Avenue, Manhattan).