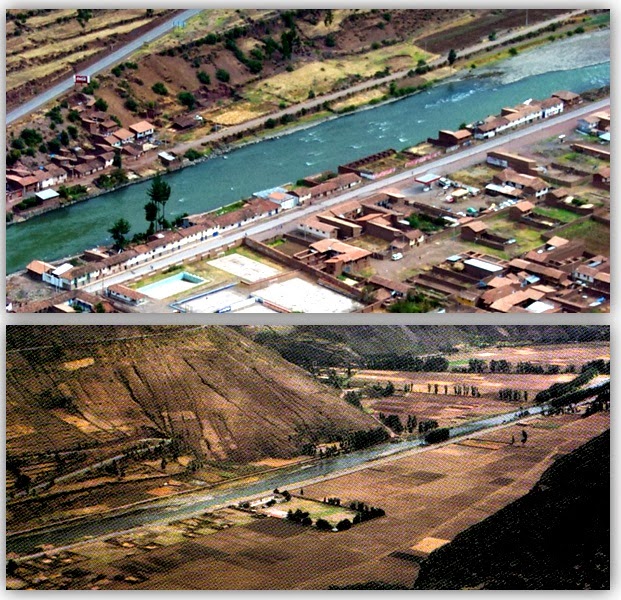 The Shocking Technology of the Inca/Pre-Inca Civilization

(German) The amazing technology of the Inca and pre-Inca cultures of the Andes in Peru always shocks and awes modern-day travelers.

The Incas and pre-Incas understood and mastered the science behind brain surgery, genetically altered food, incredible engineering marvels, sophisticated astronomical wisdom and colossal geo-glyphs visible only from the sky:

How did these “primitive” peoples develop such futuristic capabilities?

It’s a little known and unexplainable fact that the Incas straightened entire sections of streams and rivers, including a two-mile span of the meandering and often turbulent Urubamba River: 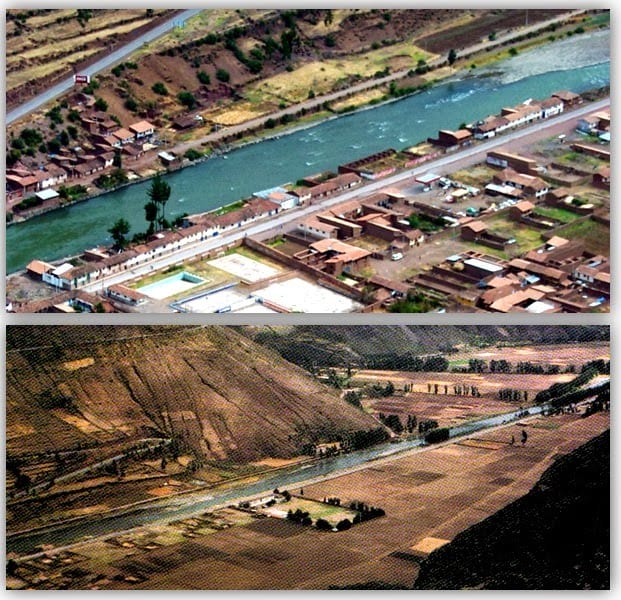 The Incas also built massive, endless super-highways along much of South America’s West Coast—roads that go on and on for endless miles, and that appear so eerily straight they seem scribed by the hand of a giant architect. 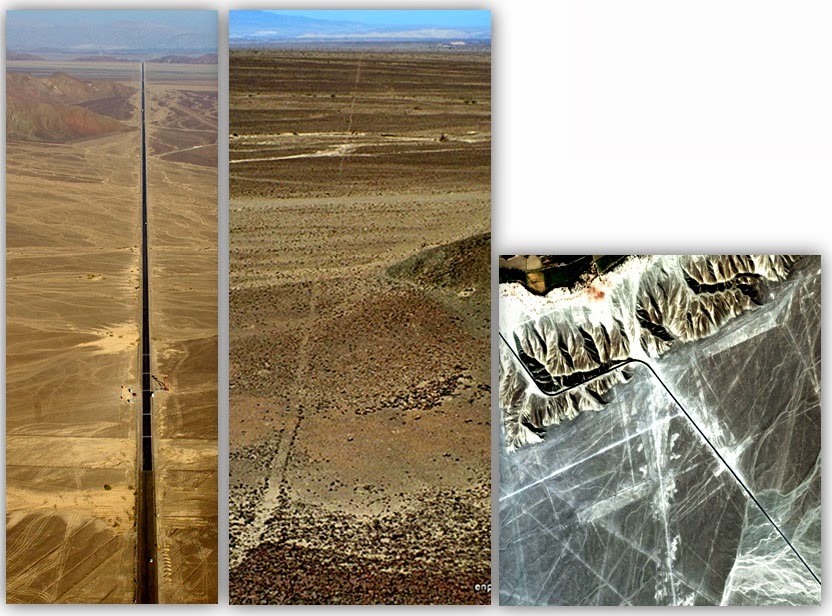 Above: Pre-Inca roads transformed into a modern-day Peruvian highway. The line runs eerily straight for miles, almost to the horizon!

By the 1300s, the Incas has become experts at brain surgery and were performing operations on the skull at a much higher success rate — better than 85 percent — than later surgeons in Europe, who were lucky to save 25 percent of their patients.

Above: Inca and pre-Inca examples of successful brain surgeries. 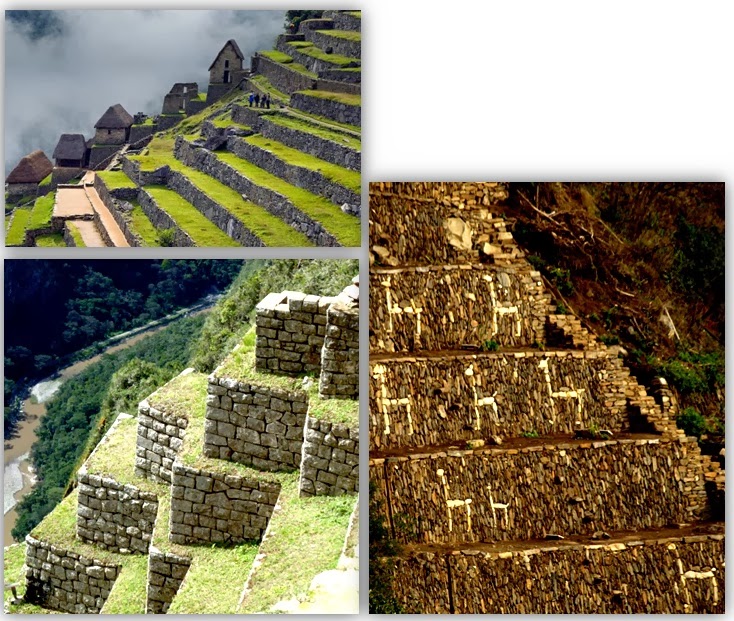 Above Left and Right: Terraces at Machu Picchu. Right: Llama decorations created by stones in the terraces at Choquequirao.

Terracing technology, along with a permanent system of irrigation, the selection of seeds, and the invention of a calendar for planting and harvesting, provided ideal conditions for the genetic manipulation of food—another enigma. By some estimates, more than half of the foods the world eats today were developed on the terraces of Andean farmers, including 20 varieties of maize.

Another amazing accomplishment can be seen in the hundreds of architectural stone masterpieces the Incas created. One example is the legendary Sacsayhuaman, a breathtaking archaeological site made with megalithic stones precisely cut and placed in ominous jigsaw-like patterns called “polygonal.”

Above Left: The gigantic stones of Sacsayhuaman. One stone block is 28 ft. high and weighs 300 tons (same weight as 300 cars). Right: The Stone of Twelve Angles. More than a ‘structural’ purpose, what ‘symbolic’ meaning does this artwork hold?

Spanish chronicler Garcilaso de la Vega was so amazed he said Sacsayhuaman seems to have been “made by some form of magic — built by demons rather than men!” Conquistador Francisco Pizarro’s secretary Pedro Sancho remarked that anyone seeing the site’s massive stones and ominous geometric patterns “would say that they cannot have been placed there by human hands.”

Another mystery is the strange “Nazca Lines,” massive geo-glyphs etched as if by giants onto the arid moonscape of Peru’s southern desert. More than 15,000 geometric and animal-like patterns criss-cross the pampas like a vast puzzle. Incredibly, their forms can only be discerned from high in the air, leaving scholars mystified as to how—and why—such precision was completed long before the documented invention of human flight. 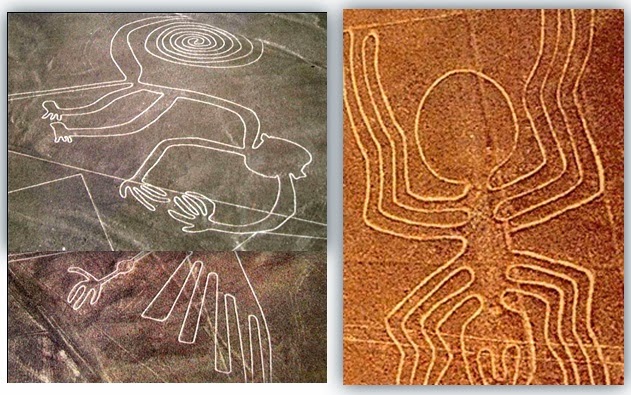 Above: Nazca shapes etched into the pampa include a monkey, bird and spider.

Yet another mystery lies in the unique and now-famous mountain plateau called Markawasi, 80 km northeast of Lima. Geologically unlike any of the surrounding Andes, Markawasi is home to a mysterious stone forest comprised of a series of enigmatic and massive carved effigies, including mind-boggling winged sphinxes, elephants, camels, and other animals, many of which never existed on the continent.

One example is shown below (damaged by time): 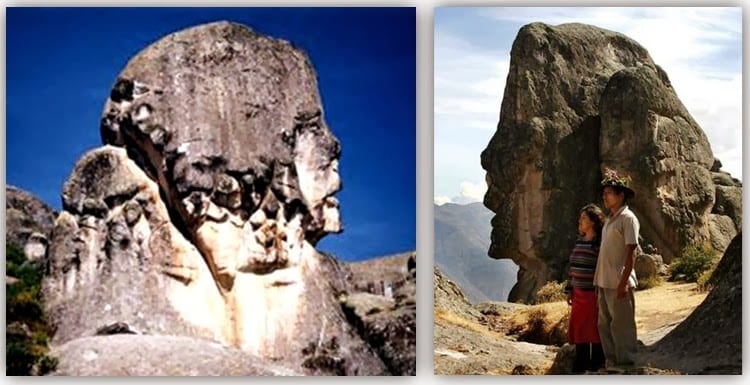 Above: The so-called “Face of Time” (i.e., the “Monument of Humanity”), a 60-foot tall sphinx-like stone sculpture of a young man whose visage slowly ages as the sun transits the sky. The image draws a symbolic parallel to the day “aging” from the sun’s rise to the sun’s evening death.

Another enigma exists in how the Incas and pre-Incas captured natural forces in their buildings and landmarks, giving the appearance of magic.  In the 2 minute video shown below (taped by the present writer at Ollantaytambo, Peru, in 2002) we catch a glimpse of this apparent magic, which marks evidence of a high technology.

As you can see, the mere touch of a finger inexplicably displaces the water’s flow (like we would do with a modern water tap), an oddity that awes and perplexes modern visitors!


Above: The magic fountain at Ollantaytambo. The water was filtered naturally and was purified and enhanced with Aloe Vera.

The Incas had no written language, no iron tools, no wheeled vehicles, no cranes or lifting devices. But, somehow, between the years 1000 and 1532 AD, they created a metropolitan and agricultural empire that encompassed more than half the West Coast of South America. At its peak, Tawa-Inti-Suyu, or Land of the Four Quarters, as the Incas called their kingdom, was the largest on Earth.

Who were these mysterious master stonemasons and builders, and why does their bizarre technology look like something from the distant future, rather than the primitive past?

Inheritors Of An Advanced Legacy

The answer is, the Incas were the inheritors of a rich ancestral tradition that stretched back many generations and even thousands of years. The Incas and the pre-Incas before them possessed a high spiritual wisdom the depth and power of which is unknown to modern Western cultures.

Their advanced spirituality endowed the Incas with what we might today describe as “superhuman” skills and abilities, including psychic power, clairvoyance, mind of matter, self-healing and an understanding of the laws of gravity, nature and astronomy that has not yet been uncovered in our “modern” civilization.