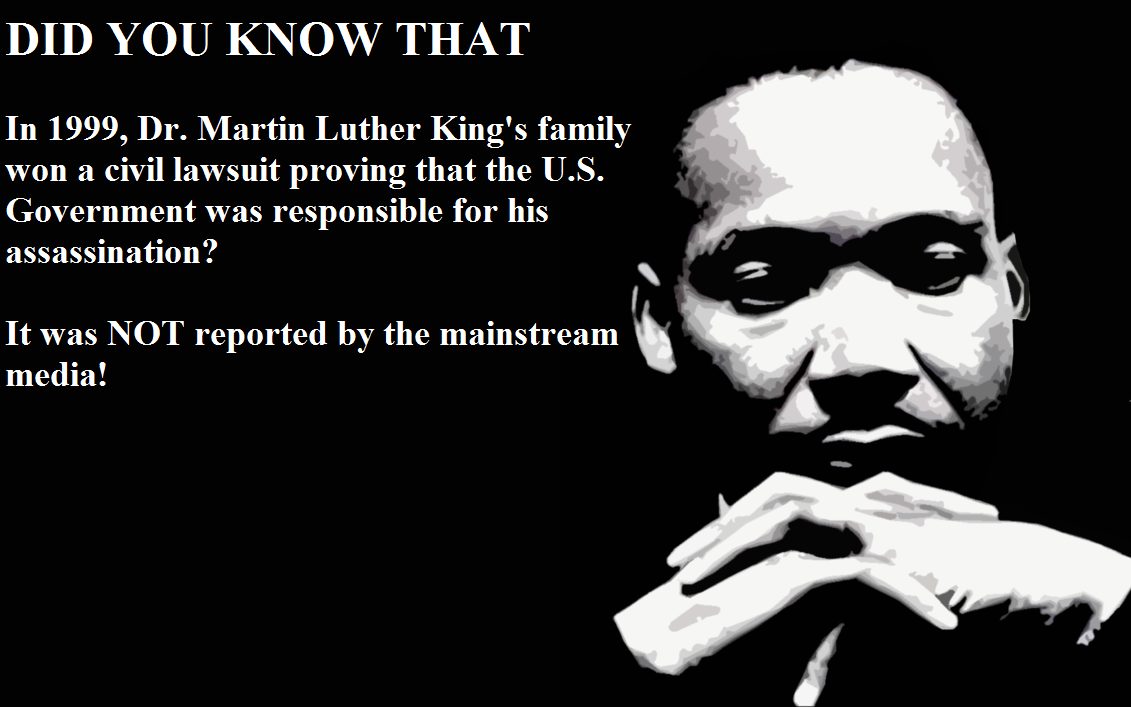 The US Government Was Found Guilty in Court for the Assassination of Martin Luther King Jr. – It Was Never Reported by the MSM

The 1999 trial, entitled “King Family versus Jowers and Other Unknown Co-Conspirators” is the only trial ever conducted on the assassination of Dr. King.

The King family’s attempts for a criminal trial were denied, as suspect James Ray’s recant of what he claimed was a false confession was denied.

The overwhelming evidence of government complicity introduced and agreed as comprehensively valid by the jury includes the 111th Military Intelligence Group were sent to Dr. King’s location, and that the usual police protection was pulled away just before the assassination.

Military Intelligence set-up photographers on a roof of a fire station with a clear view to Dr. King’s balcony. 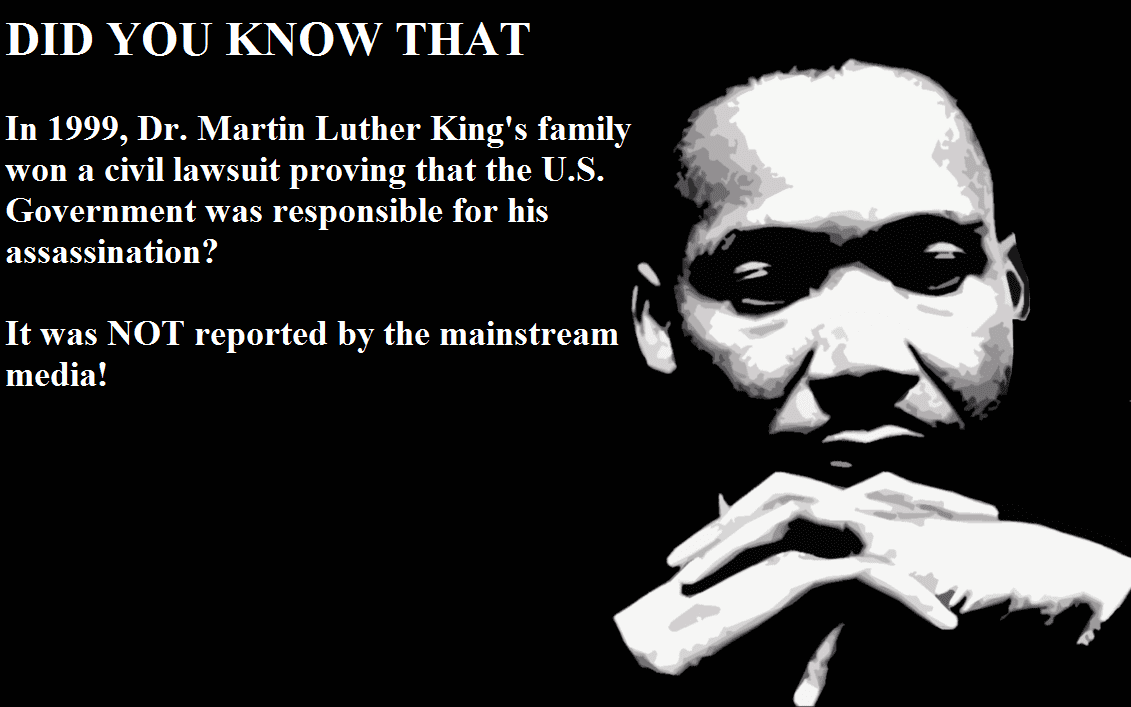 20th Special Forces Group had an 8-man sniper team at the assassination location on that day. Memphis police ordered the scene where multiple witnesses reported as the source of shooting cut down of their bushes that would have hid a sniper team.

Along with sanitizing a crime scene, police abandoned investigative procedure to interview witnesses who lived by the scene of the shooting.

Along with arranging for the assassination, CIA and military disclosure confirm that corporate media collude with political “leadership” to disinform the American public on strategic military, policy, and economic issues.

This answers the question why corporate media have not covered the civil trial and verdict for MLK’s assassination.

“For a quarter of a century, Bill Pepper conducted an independent investigation of the assassination of Martin Luther King, Jr. He opened his files to our family, encouraged us to speak with the witnesses, and represented our family in the civil trial against the conspirators.

“The jury affirmed his findings, providing our family with a long-sought sense of closure and peace, which had been denied by official disinformation and cover-ups. Now the findings of his exhaustive investigation and additional revelations from the trial are presented in the pages of this important book. We recommend it highly to everyone who seeks the truth about Dr. King’s assassination.” — Coretta Scott King, Dr. King’s wife.

After four weeks of testimony and over 70 witnesses in a civil trial in Memphis, Tennessee, twelve jurors reached a unanimous verdict on December 8, 1999 after about an hour of deliberations that Dr. Martin Luther King, Jr. was assassinated as a result of a conspiracy.

“There is abundant evidence of a major high level conspiracy in the assassination of my husband, Martin Luther King, Jr. And the civil court’s unanimous verdict has validated our belief. I wholeheartedly applaud the verdict of the jury and I feel that justice has been well served in their deliberations. This verdict is not only a great victory for my family, but also a great victory for America. It is a great victory for truth itself. It is important to know that this was a SWIFT verdict, delivered after about an hour of jury deliberation.

“The jury was clearly convinced by the extensive evidence that was presented during the trial that, in addition to Mr. Jowers, the conspiracy of the Mafia, local, state and federal government agencies, were deeply involved in the assassination of my husband. The jury also affirmed overwhelming evidence that identified someone else, not James Earl Ray, as the shooter, and that Mr. Ray was set up to take the blame.

“I want to make it clear that my family has no interest in retribution. Instead, our sole concern has been that the full truth of the assassination has been revealed and adjudicated in a court of law… My husband once said, ‘The moral arc of the universe is long, but it bends toward justice.’ Today, almost 32 years after my husband and the father of my four children was assassinated, I feel that the jury’s verdict clearly affirms this principle. With this faith, we can begin the 21st century and the new millennium with a new spirit of hope and healing.”

King Family Statement Regarding the Memphis Verdict — Released for the press

The King family stands firmly behind the civil trial verdict reached by twelve jurors in the Memphis, Tennessee courtroom on December 8, 1999.

An excerpt from remarks made by Mr. Dexter Scott King, Chairman, President, and CEO of The King Center, during the December 9, 1999 press conference regarding the verdict that may be used in support of this family decision:

“We can say that because of the evidence and information obtained in Memphis we believe that this case is over. This is a period in the chapter. We constantly hear reports, which trouble me, that this verdict creates more questions than answers. That is totally false. Anyone who sat in on almost four weeks of testimony, with over seventy witnesses, credible witnesses I might add, from several judges to other very credible witnesses, would know that the truth is here.”

“The question now is, ‘What will you do with that?’ We as a family have done our part. We have carried this mantle for as long as we can carry it. We know what happened. It is on public record. The transcripts will be available; we will make them available on the Web at some point. Any serious researcher who wants to know what happened can find out.”

Therefore, the King family shares the conviction that there is nothing more to add to their comments on record and will respectfully decline all further requests for comment.


Excerpt from the verdict

THE COURT:(…) All right, ladies and
gentlemen. Let me ask you, do all of you
agree with this verdict?

THE COURT: In answer to the
question did Loyd Jowers participate in a
conspiracy to do harm to Dr. Martin Luther
King, your answer is yes. Do you also find
that others, including governmental agencies,
were parties to this conspiracy as alleged by
the defendant? Your answer to that one is
also yes. (…) Is that your verdict?

THE COURT: All right. I want
to thank you ladies and gentlemen for your
participation.