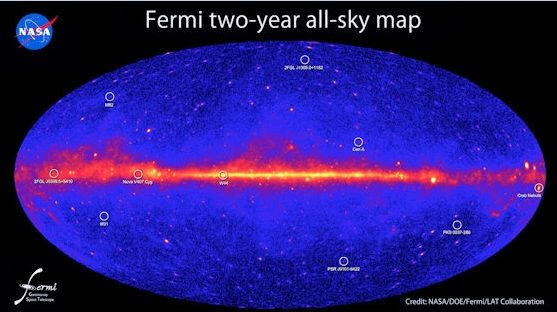 NASA is Amazed by a Huge, Unknown, Energy Field

The revelations of our energetic Universe keep on coming from many sources, including NASA’s new satellites, and it’s quite remarkable.

The observable Universe is something mankind has read as a language since the beginning. The unobservable worlds have always been the realm of philosophers, religious expressions and the esoteric sciences.

Are they coming together via modern technology, as we approach the Singularity as some call it, as a manifestation of some sort of consciousness shift? I think so. 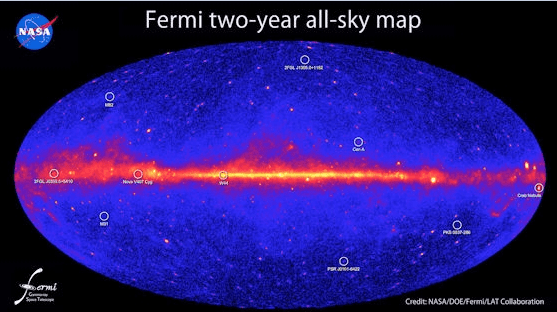 The video below was sent to me by a dear friend at Philosophers Stone in confirmation of my last post on this subject. It so blew my mind I wanted to get it out there as a sequel of sorts and to reinforce the above.

More information being collected by higher and higher technology is making some seriously profound discoveries.

NASA’s Fermi Gamma-Ray Telescope is finding hundreds of new objects at the very edge of the electromagnetic spectrum. Many of them have one thing in common: Astronomers have no idea what they are. – NASA comment on the video

The beauty of this is the scientific community’s own sense of awe as they’re no doubt realizing the old way of viewing the Universe has got to change. And, that we have a lot to learn about our energetic source. That’s a good thing.

Let’s hope it stays refreshing and not the canned suppression of information we’re used to.

In Their Own Words

The statements in this recent NASA video I find refreshing. While again it’s a carefully produced item for public consumption from a tightly controlled operation, when you realize what they are talking about and trying to describe is fundamentally the creative, energetic workings of our amazing Universe that can only lead to more Truth, that’s cool!

Especially in light of the vibrational change we’re going through.

“Fermi is picking up crazy-energetic photons” says Dave Thompson, an astrophysicist at NASA’s Goddard Space Flight Center. “And it’s detecting so many of them we’ve been able to produce the first all-sky map of the very-high energy Universe.”

The gamma rays Fermi detects are billions of times more energetic than visible light. He goes on to say that science only knew of 4 sources of gamma rays before, and now they’ve found over 600 news ones…a third of which they have no idea what they are! That’s huge!

Massive Fermi bubbles at the center of the Milky Way… never before detected.

And some come from the giant structures emanating from the Milky Way’s center called “Fermi bubbles”. These are amazing. Sci-fi can’t hold a candle to reality. They span some 20,000 light years above and below the galactic plane. You want big and powerful? And what are they?

No one in the mainstream seems to know. Or is at liberty to tell us.

This is another scientific post that says some powerful things about gamma rays.

Gamma rays are by their very nature heralds of great energy and violence. They are a super-energetic form of light produced by sources such as black holes and massive exploding stars.

Gamma-rays are so energetic that ordinary lenses and mirrors do not work. As a result, gamma-ray telescopes can’t always get a sharp enough focus to determine exactly where the sources are.

For two thirds of the new catalog’s sources the Fermi scientists can, with at least reasonable certainty, locate a known gamma ray-producing object*, such as a pulsar or Blazar, in the vicinity the gamma-rays are coming from.

But the remaining third – the “mystery sources” — have the researchers stumped, at least for now. And they are the most tantalizing.


Nearly 600 sources in the latest Fermi catalog are unidentified.

“Some of the mystery sources could be clouds of dark matter – something that’s never been seen before,” speculates Thompson.

About 85% of the gravitational mass of the universe is dark matter. The stuff we see makes up the rest. Dark matter is something that pulls on things with the force of its gravity but can’t be detected in any other way.


It’s All About Conscious Awakening

All of humanity is being presented with this energetic shift to either embrace willingly or vainly try to resist. The more discoveries like these, and the growing revelations in other areas regarding our true origins, the manipulation of humanity, the shift from ideology and heiearchy, the inter-connectivity of consciousness etc., the better.

But scientific validation always goes over big with left-brain reinforced humans. So I’m all for using everything we’ve got.

We’re all in this together so let’s all help each other wake up any way we can!

The truth vibrations, the cosmic awakening, whatever you want to call it, the energy is being dialed up in more ways than we can imagine and it’s wonderful!

My advice is to live a conscious life. Respond to these new prompts you’re getting and revel in your new found sense of conscious freedom. Look for it everywhere you turn and follow its lead.

Amazing things await each and every one of us but you will need to make some changes and let go of the old, however you’re led. And another good thing? As we each unplug from the matrix, the current oppressive structure will just naturally fall.

Each of us is the new world we seek. Just be it.