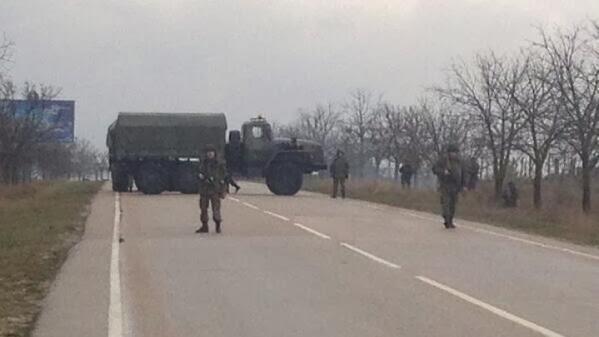 The move is aimed to settle the turmoil in the split country. [6]

At least 20 men wearing the uniform of Russia’s Black Sea fleet and carrying automatic rifles surrounded a Ukrainian border guard post on Friday, in a tense standoff near the port city of Sevastopol in Ukraine’s Crimea region.

Russian President Vladimir Putin has ordered an urgent drill to test the combat readiness of the country’s armed forces across western Russia, including the border area towards Ukraine.

“In accordance with an order from the president of the Russian Federation, forces of the Western Military District were put on alert,” said Shoigu.

Massive military drills are to be held for four days beginning February 28 and most of the country’s armed units including ships of the Baltic and the Northern Fleets and the Air Force are involved in the drills.

According to the defense ministry, some 150,000 service men are to participate during the military exercises. [4]

Ukraine’s Defence Minister says Moscow has sent 6,000 troops into the country, as it was confirmed Russian soldiers are on the streets in the southeastern region of Crimea. [3]

A Reuters reporter in the Balaklava district saw Ukrainian border police in helmets and riot gear shut inside the border post, with a metal gate pulled shut and metal riot shields placed behind the windows as protection.

A servicemen who identified himself as an officer of the Black Sea Fleet told Reuters:

“We are here … so as not to have a repeat of the Maidan.”

CNN is showing images of it describes as “Russian tanks in Ukraine”. The images, reportedly from Sevastopol, show four self propelled guns, identified by John Schindler of XX Committee as 2S1 122mm variants. The deployment of self propelled artillery as opposed to APCss or even tanks, suggests a much more offensive role. While tanks can hold territory defensively, SPGs are uselful only for bombardment. 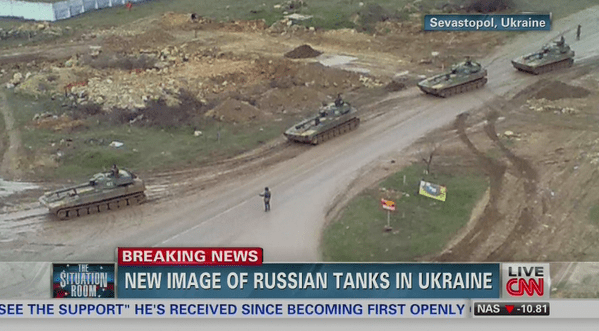 The Wall Street Journal reports that armed militias have taken control of Crimea’s major highways to stop forces from Kiev from entering. [2]

Crimean special forces and local militiamen with Kalashnikovs and masks have hoisted Russian flags and set up checkpoints on the only two highways that connect the Black Sea peninsula to mainland Ukraine.

The men are checking cars traveling in and out of Crimea, a region in Ukraine’s south that was once part of Russia and has become the epicenter of a backlash against the pro-Western uprising in Kiev that has toppled President Viktor Yanukovych.

The report goes on to discuss checkpoints in Chongar, on a major highway that connects Crimea with the Ukraine, were Berkut have raised Russian flags and established checkpoints to ensure that Ukrainian forces do not attempt to enter Crimea.

In Armyansk, another highway that connects Crimea to the mainland, pro-Russian military men have established checkpoints. 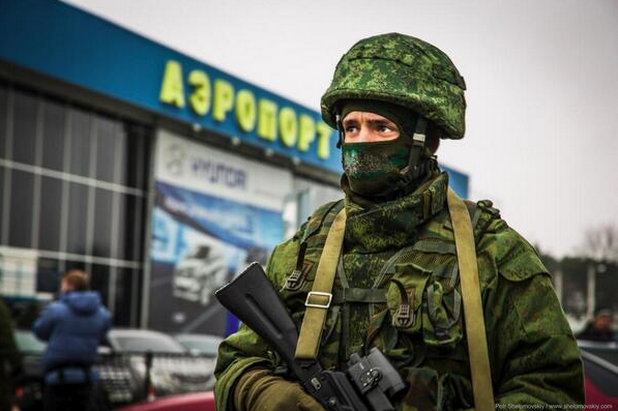 Unmarked soldiers have seized both Sevastopol and Simferopol airports, and have established roadblocks at key locations in the Crimea. [1]

11 combat heicopters have flown in from Russian territory over the Crimea and have landed at Belbek Sevastopol International Airport.


A Russian warship is blocking the port of Balaklava in the Crimea. A Russian Tarantul-Class Missile Boat is seen in the video below blocking Balaklava bay incuding a coast guard base.
The ship is the Ivanovets ship # 954 from the Black Sea Fleets 295th Sulinsk Missile Boat Division. It’s a Tarantul lll class corvette and was built in 1988.

The rebel PM has dismissed the head of the military, Admiral Ilyin who then had a heart attack.

Ukraine is accusing Russia of invading the Crimean Peninsula. And for all intents and purposes, they are, as you can see above.

That is the latest developments out of Ukraine, things continue to worsen as it looks like a Limited invasion is indeed taking place. My guess is that these forces are the vangaurd for something much bigger. Stay tuned!