Are out of body experiences valid?

Dr. Crookall at the University of Aberdeen has written 9 books on out-of-body cases due to the overwhelming amount of evidence in their favour. A survey of 380 Oxford students showed that 34% had an OBE.

A separate survey of 902 adults revealed that 8% have had an OBE. In a study of 44 non-Western societies, only 3 did not hold a belief in OBEs.

Another study showed that out of 488 world societies, 89% had at least some tradition regarding OBEs. So this phenomenon is familiar and lots of people claimed to have experienced it before, but is there any scientific credibility to this phenomenon?

A study he published in the Journal of the American Society for Psychical Research may be the most infamous OBE study ever done.

He documented the out-of-body experience of a young woman who was one of his research subjects. She was in a room with nothing but a bed, a shelf, a clock, and an observation window where Dr. Tart observed from another room.

She also had electrical devices hooked up to her head to detect brain wave activities, which can be seen in the diagram below. 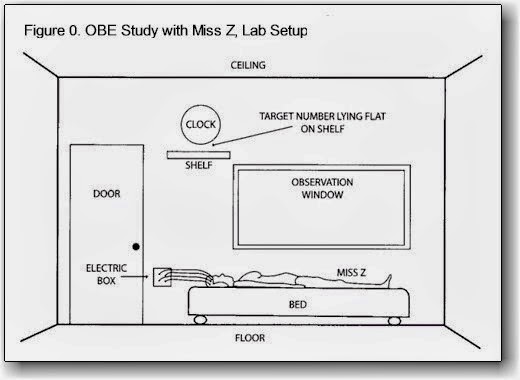 What makes this particular out-of-body experience remarkable is that she was able to leave her physical body as Dr. Tart watched from the other room and read a 5-digit number of 25132 off of a piece of paper that was on a shelf in the corner of the room.

The number was at a significant distance above the bed so that she would not be able to read the number even if she was standing, and she reported seeing the correct number him upon return to her physical body which remained attached to the bed as she was being watched.

EEGs, REMs, and galvanic skin response were all recorded before and during her OBE which indicated a significant alteration in the readings during the time she left her body. Her OBE a good example of “veridical perception” which is where verified events are observed while in an out-of-body state.

“While the physiological data are limited by dependence on her retrospective report in correlating physiological pattern with the experience, it seems as if her out-of-body experiences occurred in conjunction with a non-dreaming, non-awake brain wave stage characterized by predominant slowed alpha activity from her brain and no activation of the autonomic nervous system. Two incidents occurring in the laboratory provide suggestive evidence that the out of-the-body experiences had parapsychological concomitants.

“In summary, this brief study found a fairly clear-cut correlation between several of Miss Z’s reported OOB experiences and a physiological pattern characterized by a flattened EEG with prominent alphoid activity, no REM or skin resistance activity, and normal heart rate.”

This is huge, because not only does it show that the experience of leaving your body is correlated with abnormal changes in brain-body activities, the test subject was also able to go and read a 5 digit number.


She also reported the correct positioning of the piece of paper that had the number on it, which as flat on the shelf as opposed to leaning against the wall which is what she was expecting.

By the way, the odds of guessing a 5 digit number first try are less than 1 in 59000, so to claim that she just so happened to guess it right on her first try is out of the question.

I have had 2 out-of-body experiences myself, one of which I observed real events happening in a different location in my house, so I can personally testify to their validity.

What skeptics are really good at is leaving out pieces of evidence that they can’t explain, and point to how some scientific studies have replicated the feeling of being out-of-body by some virtual means.

There is a difference between the illusion of being somewhere else, and actually seeing real events happening in locations that your physical body has absolutely no access to. This study is another piece of evidence that gives serious scientific credibility to the idea of a soul.

References: Why don’t you try this;