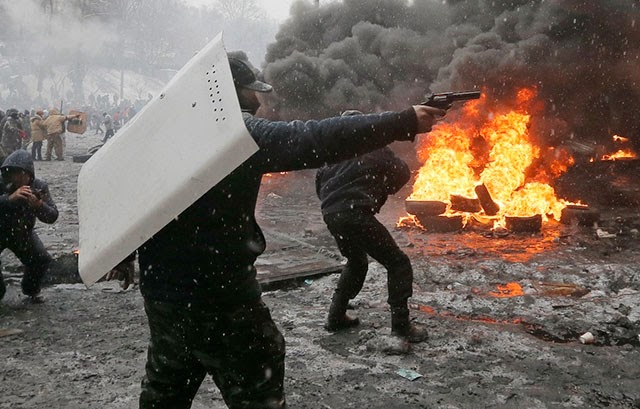 The US-Directed Ukraine Coup Exposes Itself

There’a an old adage that goes something like this: “The more guilty one is in the perpetration of a dastardly crime, the more likely they are to accuse innocent parties of the very same atrocity.”

There is no better example of this on the various geo-political battlefields dotting Planet Earth than the recent color revolution in the Ukraine.

A violent revolution which was directly overseen and coordinated by the US-EU espionage agencies. 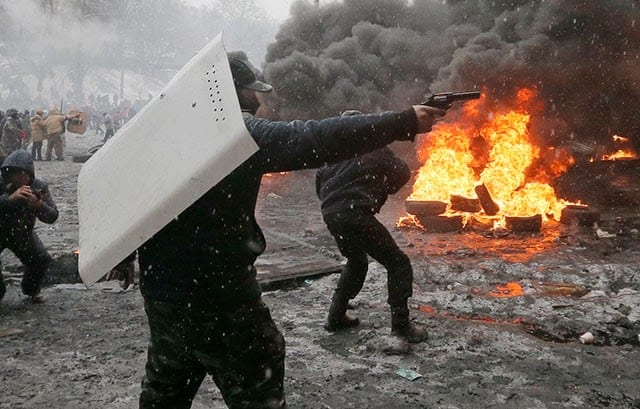 Their highly calculated and preplanned coup d’état orchestrated in Kiev is as transparent as the audiotape of foul language used by Victoria Nuland, Assistant Secretary of State for European and Eurasian Affairs at the United States Department of State, in her conversation with the US ambassador to the Ukraine.

The various collaborators who participated in the execution of this coup d’état include all the usual suspects – US and UK, EU and NATO, CIA and MI6, US Department of State and Council on Foreign Relations, DIA and NSA.

Each of these parties is now working overtime to keep the lid on their covert crimes committed against the Ukrainian people. Were they to be exposed in the sunshine of revealed subterfuge and sabotage, the entire world would check these globalist conspirators with finality.

That is the explicit purpose of this exposé

No other nations on Earth have gotten away with instigating and engineering so many civil wars and revolutions, coup d’états and and government overthrows as the US-UK juggernaut. They in turn goad the EU and NATO into deliberate and premeditated military action that is neither legal nor ethical, lawful nor moral, to finish the ousting process.

This acute phase of toppling a democratically elected government is then followed by aggressive overtures from the IMF and/or World Bank, as well as legal threats from the ICC in The Hague.

When will the world wake up to these highly destructive shenanigans? How many nations must fall into wreck and ruin before the community of nations sees the light and responds appropriately to these invasions of national sovereignty?

How many small or weak, powerless or defenseless countries must be victimized by such murderous and thieving conduct before this international meddling is terminated once and for all?

In the glaring illustration of the Ukraine, it is quite obvious what the Western Powers had planned all along. The Ukraine President even made a very unusual and heartfelt apology to his people for having not responded with decisiveness and strength to the unfolding government takeover.[1]

This twitter-driven revolution happened so quickly during the Sochi Olympics that both he and Putin were seemingly blindsided.

Nevertheless, the world watched in horror as the CIA & Company pulled off yet another coup d’état in broad daylight. And now the initiated and informed among us reel in disbelief as Obama et al. predictably blame the innocent, and issue their predictable threats of retaliation.

Let’s face it, no one has it down better than the CIA & Company. They implemented this palace revolution as well as any in modern history. Rarely has the world experienced a play-by-play putsch via Facebook like the one that was executed in Kiev. Don’t these photos tell the story!

The horrific drama, by way of wanton destruction and staged violence, was as purposeful as it was traumatizing. 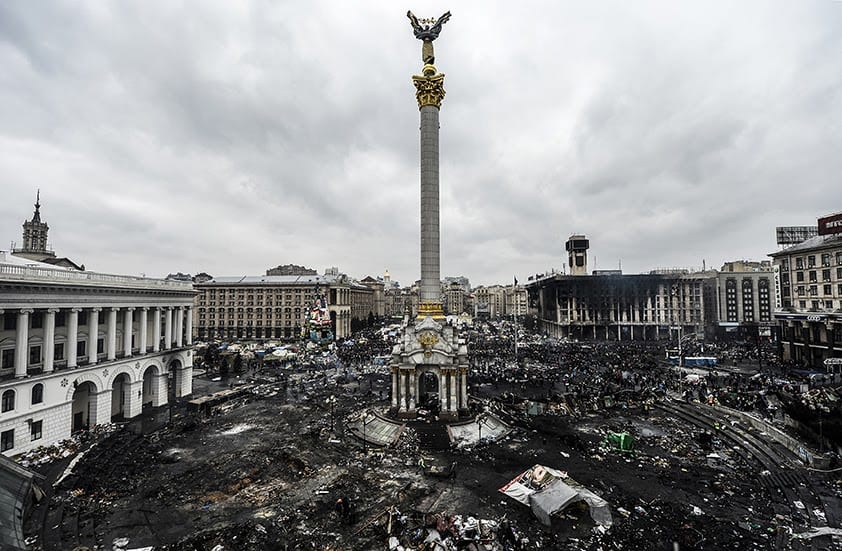 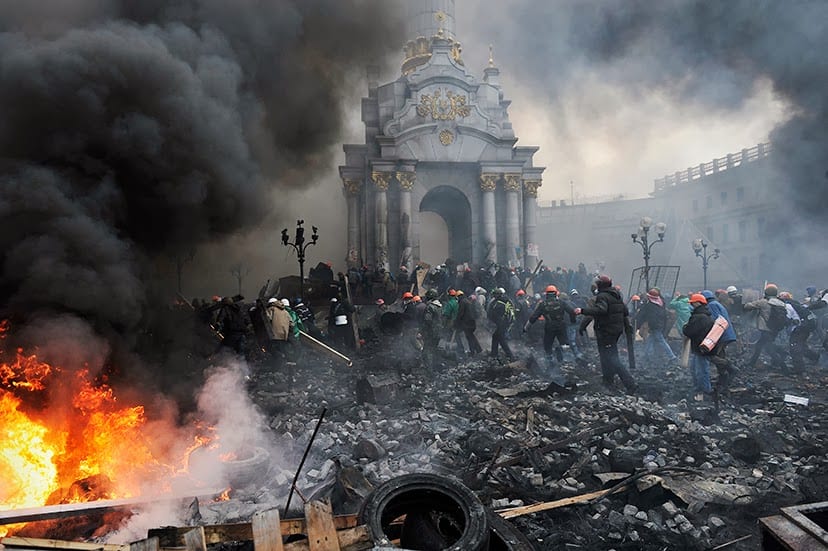 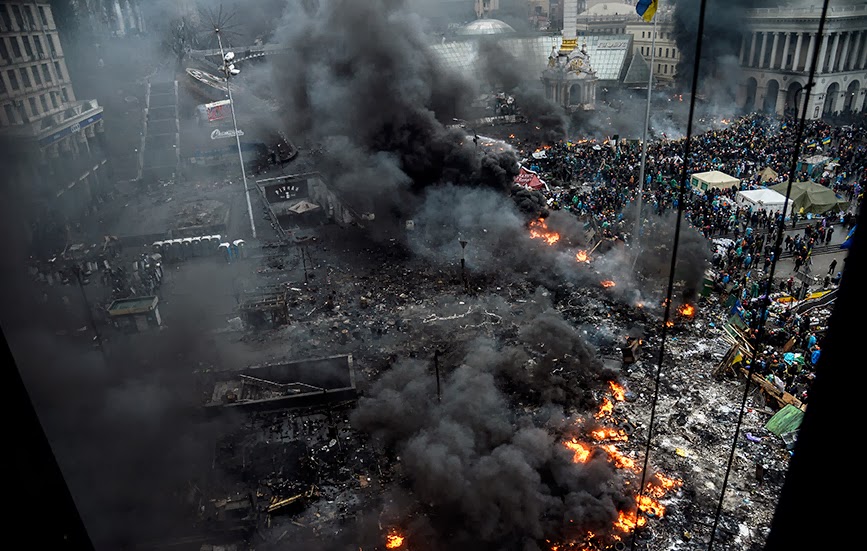 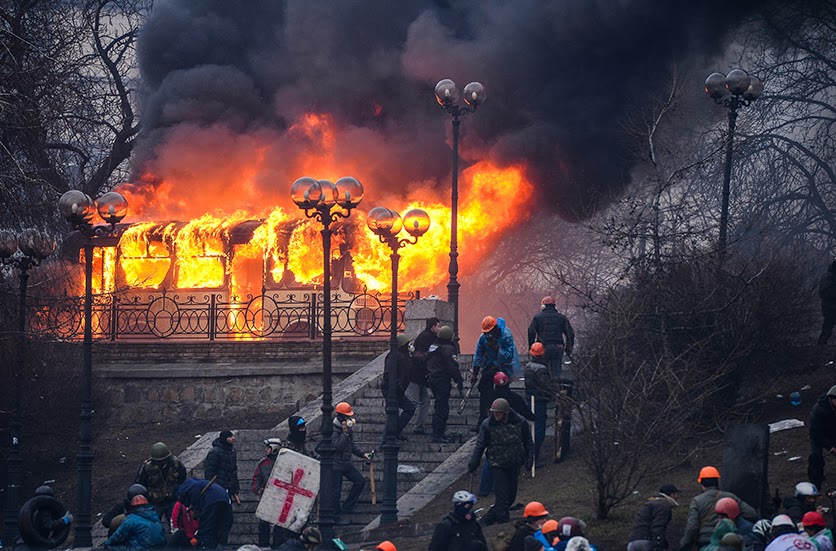 These photos capture well the intentions of the Western-backed fascist groups who showed up in Kiev’s Maidan Square to execute a carefully orchestrated scheme to overthrow the legitimate Ukraine Government.

Not only did US statesmen actively support these terrorists from the very beginning, the US-EU tandem stoked the flames of revolution every way they could without getting caught in broad daylight.

Related: My first-hand experience with a Western coup – disguised as a revolution;

Shock and Awe has always been their MO

However, just like Venezuela, their handiwork is all over every violent action and shocking event. The US cabal of Obama, Kerry, Nuland et al. are all deeply complicit in this aggressive plot to topple a sitting government in Kiev.

They used proxies in the form of ultra-nationalist, fascist thugs who had no respect for the rule of law. Gangs of terrorist thugs who received their orders from all the usual players who collude to implement color revolutions at will — CIA, MI6, and MOSSAD.

The mainstream media was also employed with great effect in order to ensure that the sympathies of the Western nations would go out to the poor Ukrainian people. Can you imagine what would happen in DC if these protesters show up in force to turn the National Mall into a war zone?! 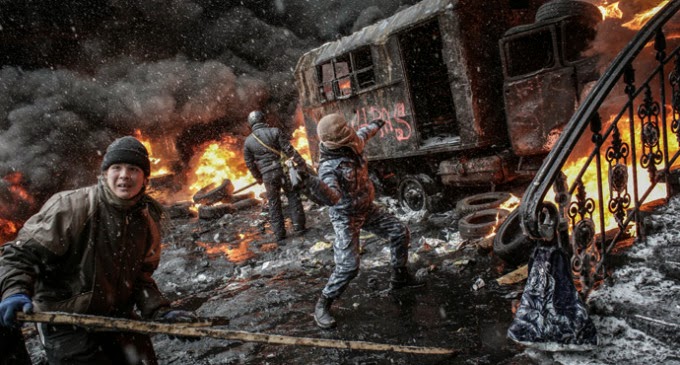 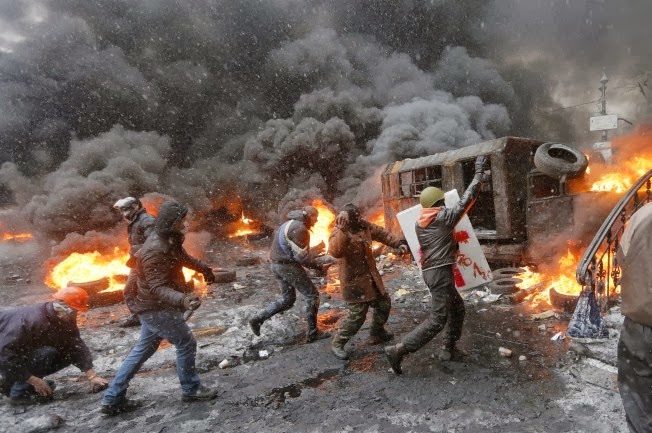 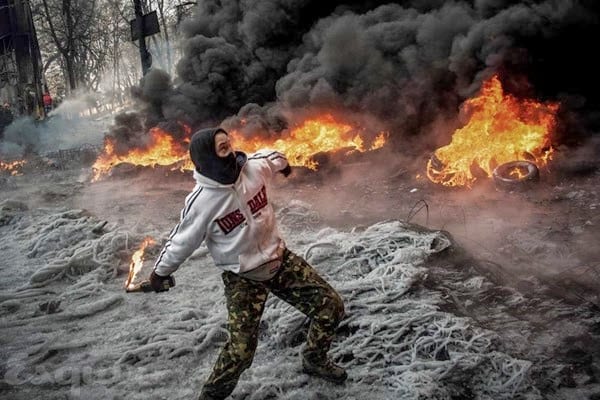 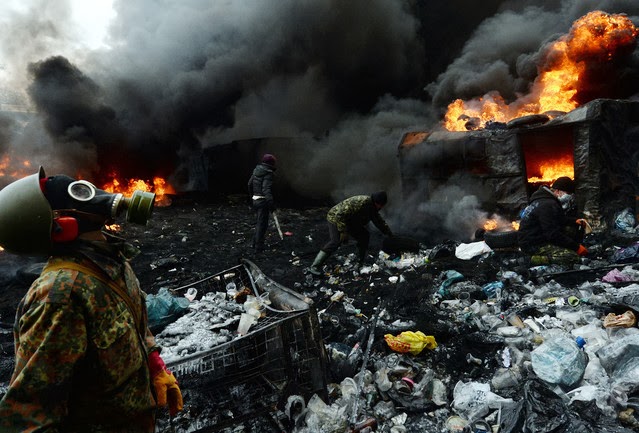 These are the characters who the US Government used to carry out this coup d’état. These are the tactics by which the EU has just installed an illegitimate government in the Ukraine. These are the folks who Russia is supposed to respect as representing the new government of one of their biggest trading partners… and debtor nations.

This national tragedy was 100% foisted on a nation that is broke and bankrupt. Years of economic ruin (due to the globalist-engineered economic depression) have set the Ukrainian populace up to react against any government in power.

The US-EU took full advantage of these dire and desperate circumstances so that a puppet government could be propped up in order to further enslave the Ukrainian people. In this way, the IMF and World Bank are reflexively enlisted to radically increase the debt burden of an already broken country.

These are just some of the consequences of a Western-backed color revolution. Always the people are subjected to more indignities, greater deprivations and countless financial hardships.

Is this anarchic and oppressive conduct what the American people want their government supporting abroad? Does the average US citizen really support this kind of meddling in the affairs of another sovereign nation? 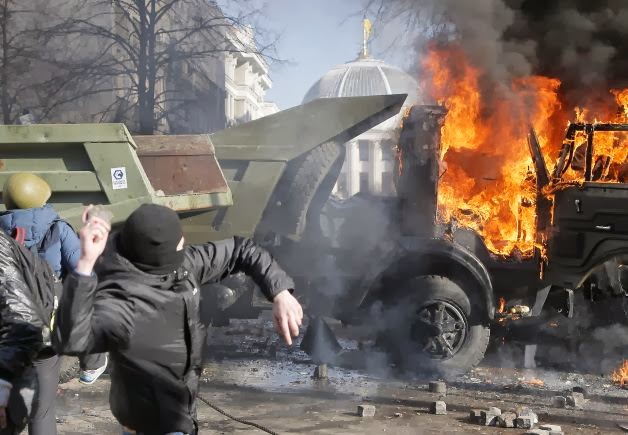 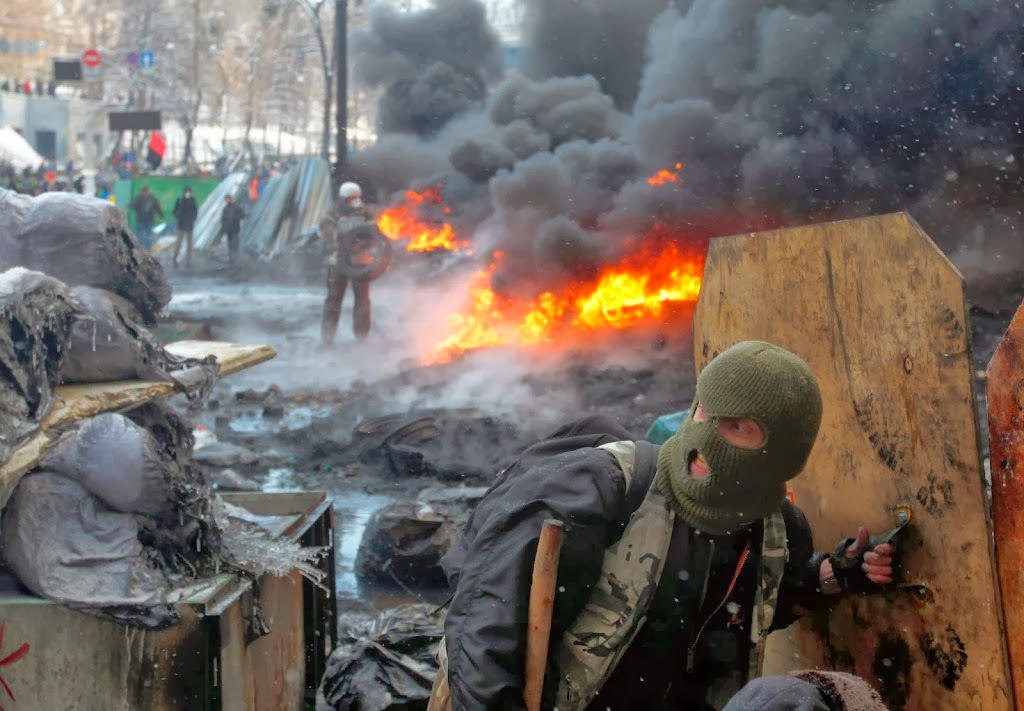 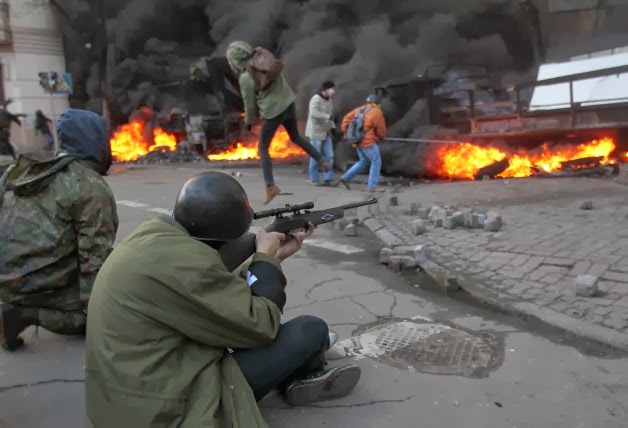 Would the American people accept a band of outlaws taking over our public buildings at the barrel of a gun… because foreign nations were angry that the US Government failed to sign a trade agreement?

By Michael Thomas, State of the Nation;

Author’s Note:
A close look at all of the photos above clearly shows how “Smoke and Fires” were used to “Shock and Awe”. This was a psyop planned for who knows how long deep in the bowels of ‘some’ headquarters in Langley.

Those plotters had every prop picked out and conveniently placed on the Maidan stage for dramatic effect. Yes, those photos provide graphic testimony of just how determined the coup plotters were to topple the Ukraine Government “by any means necessary”. And so they did… except that this second phase of the revolution will inevitably give way to a third phase.