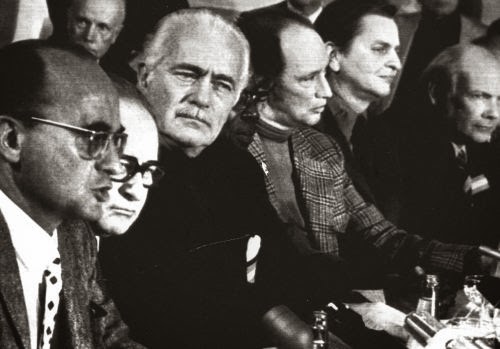 Recently unearthed documents from the private collection of former diplomat and Bilderberg regular George C. McGhee have revealed (among other things) that the Club of Rome in 1970 wanted to create a “global matrix approach”, or G-Matrix approach, as a means of bringing people into an enviro-eugenicist mindset globally.

The Club of Rome was an influential think tank, advocating among other things worldwide population reduction and global environmental governance. The author of the uncovered manuscript from 1970 was Italian industrialist Aurelio Peccei, who founded the Club of Rome in 1968. 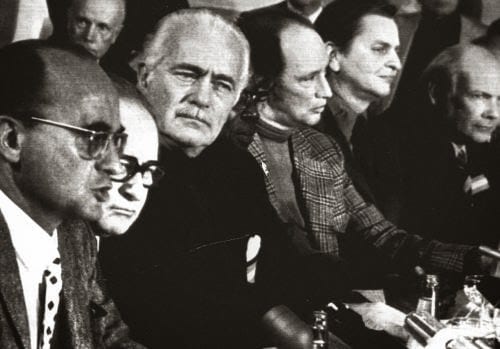 Peccei wrote that any acceptance of the Club’s conclusions “relies heavily on a global matrix approach.”

Furthermore he writes that these conclusions by the infamous Club (which includes advocacy of worldwide population reduction) can only be generally accepted “through (…) an iterative, global and substantive process. Through such a comprehensive process, writes Peccei, mankind can “gradually attain a value-base consensus, and avoid the prospects of a critical future situation.”

The work program exposition of the Club of Rome project relies heavily on the global (or G) matrix approach. It therefore appears desirable to start the discussion of the work program by explicating the structure and utility of such a matrix.”

The uncovered document from McGhee’s private collection states outright that the Club has sought to manufacture a consensus in all layers of society in regards to the conclusions of the Club’s reports as published in the early 1970s.

“It should be pointed out (…) that such a consensus is meant to provide “the initial conditions” for the operational evolution of the Club of Rome Project”, Aurelio wrote in 1970.

“It should only be viewed as an exemplary value-base whose universality, validity, and credibility depends on the judgments of the DELPHI technique participants. Nevertheless, it will represent an attempt for a substantive and professionally coordinated delineation of the “Predicament of Mankind”. The more groups engage in similar intellectual efforts, the more meaningful the dialogue on the worldwide problematique will become.”

This “problematique” is being described as “the constantly widening cultural, economic and technological gaps among nations, or the fearsome multiplication of the population on a finite planet, or the transnational phenomenon of youth rebellion, or the possibility of crossing the threshold past which it will be feasible to manipulate human genetic material.” 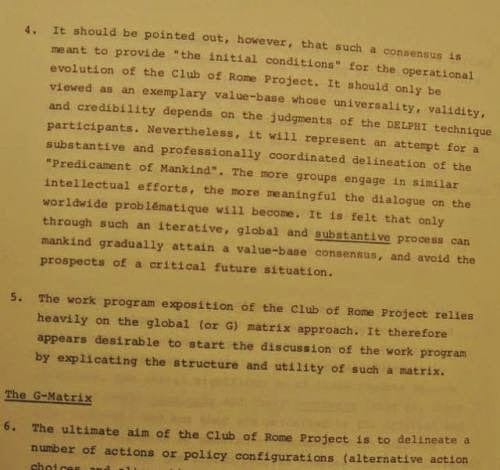 The mention of the DELPHI method in the context of this information-snippet about a global matrix of manufactured consent is interesting. According to Wikipedia, the method has been widely used for business forecasting and other forecasting “covering such topics as scientific breakthroughs, population control, automation, space progress, war prevention and weapon systems.”

As I covered in an earlier article, the predictive systems and models of the Club of Rome were used by the Chinese to set up their brutal one-child policy. In 1978, a group of Chinese scientists visited several scientific conferences in Europe, and readily picked up on the ideas distributed by the Club of Rome.

At the head of this Chinese delegation was a man credited for introducing China’s notorious one-child policies, source of so much hardship suffered by the Chinese people in the last decades. Robert Zubrin, senior fellow with the center for security policy, published an op-ed in the Washington Times, reaffirming that Greenhalgh’s study is correct. Zubrin wrote:

“In June 1978, Song Jian, a top-level manager in charge of developing control systems for the Chinese guided-missile program, traveled to Helsinki for an international conference on control-system theory and design.

While in Finland, he picked up copies of “The Limits to Growthand: Blueprint for Survival”- publications of the Club of Rome, a major source of Malthusian propaganda – and made the acquaintance of several Europeans who were promoting the report’s method of using computerized “systems analysis” to predict and design the human future.”

To illustrate that the Global Matrix was further developed, the 1991 publication The First Global Revolution: A Report to the Club of Rome shows us that early on the common denominator was invented around which the world could rally, thereby creating a common purpose:

“In searching for a new enemy to unite us, we came up with the idea that pollution,the threat of global warming, water shortages, famine and the like would fit the bill. All these dangers are caused by human intervention, and it is only through changed attitudes and behavior that they can be overcome. The real enemy then, is humanity itself.”

The concept of a Global Matrix of manufactured consent, as described and developed by the founder of the Club of Rome, illustrate that the scam is perpetrated on such an unprecedented scale, that up until a few years ago few dared question its validity.

This $2.22 Meal Contains 196 Ingredients: It's a Health Bomb! Previous post
6 Easy Steps to a Perfect Garden Next post