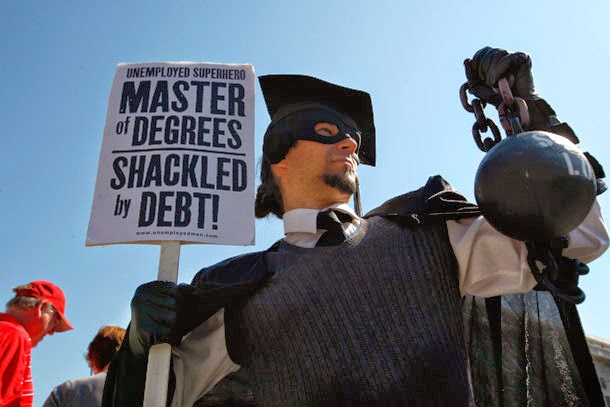 College is a Waste of Time and Money — the Evidence

Are you thinking of going to college?  If so, please consider that decision very carefully.  You probably have lots of people telling you that an “education” is the key to your future and that you will never be able to get a “good job” unless you go to college.

And it is true that those that go to college do earn more on average than those that do not.  However, there is also a downside.

At most U.S. colleges, the quality of the education that you will receive is a joke, the goal of most colleges is to extract as much money from you and your parents as they possibly can, and there is a very good chance that there will not be a “good job” waiting for you once you graduate. 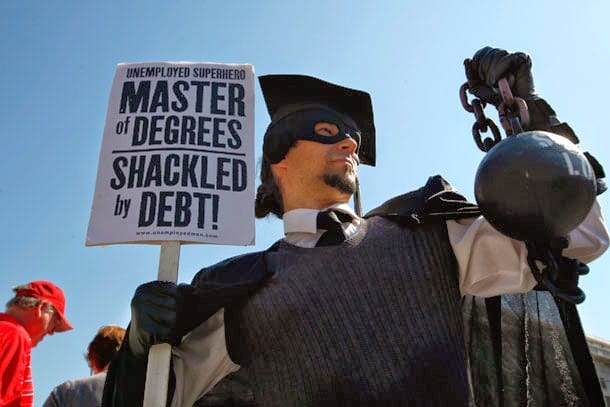 And unless you have someone that is willing to pay your tuition bills, you will probably be facing a lifetime of crippling student loan debt payments once you get out into the real world.  So is college a waste of time and money?  In the end, it really pays to listen to both sides of the debate.

Personally, I spent eight years at U.S. public universities, and I really enjoyed those times. But would I trade my degrees today for the time and money that I spent to get them? Absolutely.

It is a student loan debt bubble unlike anything that we have ever seen before, and now even those that make their living from this system are urging reform.  For example, consider what a law professor at the University of Tennessee recently wrote for the Wall Street Journal:

“In the field of higher education, reality is outrunning parody. A recent feature on the satire website the Onion proclaimed, ’30-Year-Old Has Earned $11 More Than He Would Have Without College Education.’ Allowing for tuition, interest on student loans, and four years of foregone income while in school, the fictional student ‘Patrick Moorhouse’ wasn’t much better off. His years of stress and study, the article japed, ‘have been more or less a financial wash.'”

“‘Patrick’ shouldn’t feel too bad. Many college graduates would be happy to be $11 ahead instead of thousands, or hundreds of thousands, behind. The credit-driven higher education bubble of the past several decades has left legions of students deep in debt without improving their job prospects. To make college a good value again, today’s parents and students need to be skeptical, frugal and demanding.”

When a lot of young Americans graduate from college and can’t find a decent job, they are told that if they really want to “be successful” that what they really need is a graduate degree.

That means more years of education, and in most cases, even more debt.

But by the time many of these young achievers get through college and graduate school, the debt loads can be absolutely overwhelming:

“The typical debt load of borrowers leaving school with a master’s, medical, law or doctoral degree jumped an inflation-adjusted 43% between 2004 and 2012, according to a new report by the New America Foundation, a left-leaning Washington think tank. That translated into a median debt load — the point at which half of borrowers owed more and half owed less — of $57,600 in 2012.

The increases were sharper for those pursuing advanced degrees in the social sciences and humanities, versus professional degrees such as M.B.A.s or medical degrees that tend to yield greater long-term returns. The typical debt load of those earning a master’s in education showed some of the largest increases, rising 66% to $50,879. It climbed 54% to $58,539 for those earning a master of arts.”

In particular, many are questioning the value of a law school education these days.  Law schools are aggressively recruiting students even though they know that there are way, way too many lawyers already.  There is no way that the legal field can produce enough jobs for the huge flood of new law school graduates that are hitting the streets each year.

The criticism has become so harsh that even mainstream news outlets are writing about this.  For instance, the following comes from a recent CNN article:

For the past three years, the media has picked up the attacks with relish. The New York Times, in an article on a graduate with $250,000 in loans, put it this way: “Is Law School a Losing Game?” Referring to the graduate, the Times wrote, “His secret, if that’s the right word, is to pretty much ignore all the calls and letters that he receives every day from the dozen or so creditors now hounding him for cash,” writes the author.  Or consider this blunt headline from a recent Business Insider article: “‘I Consider Law School A Waste Of My Life And An Extraordinary Waste Of Money.'” Even though the graduate profiled in the piece had a degree from a Top 20 law school, he’s now bitterly mired in debt. “Because I went to law school, I don’t see myself having a family, earning a comfortable wage, or having an enjoyable lifestyle,” he writes. “I wouldn’t wish my law school experience on my enemy.”

In America today, approximately two-thirds of all college students graduate with student loan debt, and the average debt level has been steadily rising. In fact, one study found that “70 percent of the class of 2013 is graduating with college-related debt – averaging $35,200 – including federal, state and private loans, as well as debt owed to family and accumulated through credit cards.”

That would be bad enough if most of these students were getting decent jobs that enabled them to service that debt.

But unfortunately, that is often not the case.  It has been estimated that about half of all recent college graduates are working jobs that do not even require a college degree.

And the really sick thing is that the quality of the education that most college students are receiving is quite pathetic. Recently, a film crew went down to American University and asked students some really basic questions about our country. The results were absolutely stunning:

“When asked if they could name a SINGLE U.S. senator, the students blanked. Also, very few knew that each state has two senators. The guesses were all over the map, with some crediting each state with twelve, thirteen, and five senators.”

How in the world is it possible that college students in America cannot name a single U.S. senator? These are the leaders of tomorrow? That is a frightening thought.

If parents only knew what their children were being taught at college, in most instances they would be absolutely horrified.

The following is a list of actual college courses that have been taught at U.S. colleges in recent years:

That last one is my favorite.

The truth is that many of these colleges don’t really care if  your sons and daughters learn much at all.  They just want the money to keep rolling in.

And our college students are discovering that when they do graduate that they are woefully unprepared for life on the outside.  In fact, one survey found that 70% of all college graduates wish that they had spent more time preparing for the “real world” while they were still in college.

In America today, there are more than 300,000 waitresses that have college degrees, and close to three out of every ten adults in the United States under the age of 35 are still living at home with Mom and Dad.

Our system of higher education is not working, and it is crippling an entire generation of Americans.

Here are some worth-reading testimonies and comments:

1. “At age 40 (10 years ago) I graduated from Pitt with a BSIS thinking I would break into the Pharmacy Automation Industry to name but one. I owed nearly as much as I made in a year ~$30,000. The only offers I received were out of state temp jobs at a pay cut. Not. I will now pay what amounts to a second car payment until I am in my 60s. You do the math. Don’t weep for me though. I am married to a wonderful Hospice Nurse that makes twice as much as me and that doesn’t hold this error against me. I meant well and tried to better myself.”

2. “Sadder still is that many of the Occupy Wall Street protesters blame their student loan debt on the banks as lenders and not the colleges as greedy tuition shylocks. Your cool liberal arts professor is pulling down six figures for “working” 3 day weeks 30 weeks a year.

He’ll never tell you you’re wasting your money paying tens of thousands of dollars to sit in his classroom absorbing his useless ideology. Many colleges have endowments worth tens of billions yet the tuition increases far out pace inflation — Harvard over $27 billion, Yale over $16 billion, Stanford almost $14 Billion. Google “college endowment rankings” to see many more examples.

The irony is that many U.S. manufacturers are screaming for more qualified trades people who are capable of operating or at least capable of learning how to operate sophisticated CNC equipment i.e. doing real honest productive work. Kids in their 3rd and 4th year of high school should take a serious look at this option.”

3. “‘Hey kiddies, keep spending that money in college. Get that degree as an MBA. You can have a job at Wal-Mart. You can become a cashier or a clerk.’ — Gerald Celente

What does a college education get you in 2014? Well, let’s see, here are a few examples from Philly (the city with the most colleges and universities in The Banana Republic of America).

People’s Exhibit A: at a local dollar store, one of the employees is a nerd I call The Dangling Participle Man. I call him that because he’s always babbling about people’s grammar (has a masters from a major university, yet he’s stuck at the dollar store buried in student loan debt). When I was growing up, nerds like that earned a good living. Now, they get a one-way ticket to the dollar store.”

So I went through an established, non-profit university’s online program and got my B.S. in Accounting and Finance. Little did I know that the only thing that would change is that I would be stuck with over $30,000 in debt. Every résumé I sent out was met with indifference at best.

I’m one of the lucky ones. I may still have my old job, I may not have as much debt, but I sure don’t feel particularly lucky.

Just a couple of months ago, my car needed a new catalytic converter to pass inspection. The service cost me just over $1,000. I fear for the next time I need repair work on my car; will I be able to afford the bill? If I hadn’t gone back to school, the $400 a month I pay toward my student loans could have bought me a brand new car with money left over. But hey, hindsight’s 20/20, right?”

You Cannot Afford College Education? Learn Everything Online, from these websites.

Ancient Egyptian Glyphs Found in Australia Are Rewriting History Previous post
What if Money Was no Object? -- Alan Watts Lecture Next post