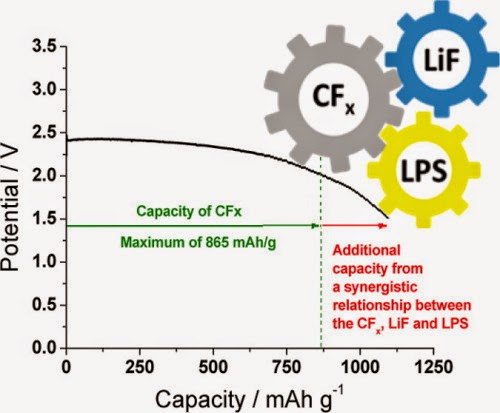 Just when you thought you knew everything about the theoretical maximum capacity of batteries, along comes the Oak Ridge National Laboratory to throw you for a loop.

A team of researchers at ORNL has developed a pathway for “unprecedented energy density” in a battery that has already demonstrated a 26 percent increase over its theoretical maximum.

The ORNL team tested its concept on a lithium-carbon fluoride battery, which is considered “one of the best” batteries in the single-use (non-rechargeable) class for its high energy density.

Hold Your Breath On That Next-Gen EV Battery

Before we get into the nitty gritty, let’s pause and underscore that the finding involves single use batteries, so the implications for rechargeable EV batteries are remote at best.

However, according to ORNL the discovery could stretch single use battery life by “years or even decades.” That has significant implications for medical devices, remote sensors and keyless systems, and other applications where recharging is not an ideal solution.

In terms of our clean tech focus here at CleanTechnica, the improvement in lifecycle translates into significant resource conservation opportunities, including the potential for eliminating battery replacement surgery for medical devices.

Now think about how the medical device field is set to explode and you can see how a longer-lived battery comes into play.

For the record, ORNL isn’t the only federal agency interested in extending the life of lithium-carbon fluoride batteries. Army researchers are also on the case, pursuing a cathode-based track.

Secret Sauce for Next Generation Batteries

The beauty of the ONRL advanced battery discovery is that it involves a total rethinking of the role that each battery component plays.

For those of us who already forgot all the chemistry we learned in high school, here’s a quick review. Batteries consist of a cathode (positive charge), anode (negative charge), and an electrolyte, which conducts the ions (the charged particles).

Conventional battery engineering relies on the principle that each of the three components functions independently. In this system, the electrolyte is inactive in terms of maximizing battery capacity.

They did that by incorporating a solid lithium thiophosphate (thiophosphate is a compound of phosphorus) electrolyte, which ORNL’s Chengdu Liang describes thusly:

“As the battery discharges, it generates a lithium fluoride salt that further catalyzes the electrochemical activity of the electrolyte. This relationship converts the electrolyte — conventionally an inactive component in capacity — to an active one.”

What’s All This About Lithium Thiophosphate?

As for EV batteries, ORNL is running down a number of promising leads for next-generation technology including lithium-sulfur, possibly with the help of a new cathode developed by Pacific Northwest National Laboratory (the University of Arizona is also hot on the sulfur trail).

About author: Tina Casey specializes in military and corporate sustainability, advanced technology, emerging materials, biofuels, and water and wastewater issues. Tina’s articles are reposted frequently on Reuters, Scientific American, and many other sites. You can also follow her on Twitter and Google+.

The Year of the Mystery: The Morning After [Part Three] Previous post
Solar Roadways: Replacing the Aspalth Streets With Solar Panels Next post