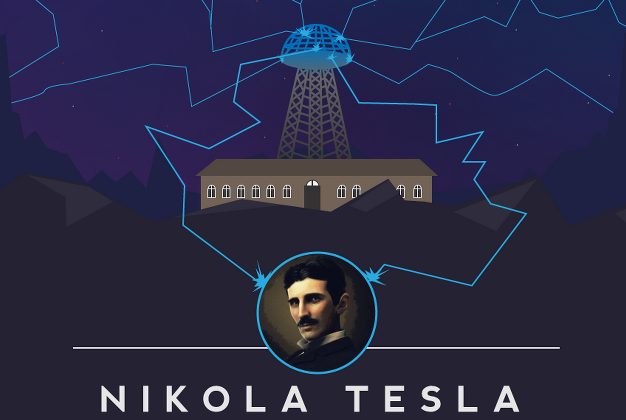 The Story of the Forgotten Wizard: Nikola Tesla

The article is based on David J. Kent’s famous book “Tesla: Wizard of Electricity”.

The names Edison, Marconi, and Westinghouse easily come to mind when electric lighting, radio, and energy are mentioned. Nikola Tesla, the inventive genius who spearheaded the development of all of these, is barely remembered. Why?

Nikola Tesla was one of the most important men of invention in history, and yet many people have never heard of him. He worked briefly for Thomas Edison, but then became his biggest rival.

He forged friendships with such divergent personalities as George Westinghouse, Mark Twain, poet Robert Underwood Johnson and his lovely wife Katherine, and naturalist John Muir, but then would reclusively hide in his darkened lab and find his closest companionship in a white pigeon.

He lit up Chicago, but almost tore down New York. A man of contrasts, Tesla became the toast of the town, but died nearly penniless in a lonely New Yorker Hotel room. Nikola Tesla was one of the most important men of invention in history, and yet many people have never heard of him.

Born during a midnight lightning storm in 1856, it seems Nikola Tesla was destined to electrify the world. Of Serbian heritage, he studied and traveled through the exotic capitals of Europe before settling in New York City and becoming an American citizen, an accomplishment he cherished for the rest of his life.

It was Tesla, teamed with George Westinghouse, who won the “war of the currents” over Thomas Edison and helped bring modern day electricity into our homes. Tesla’s imaginative designs of all the key elements made the fledgling alternating current (AC) capable of producing high voltages and transmitting power over great distances.

The low voltage and annoying sparking of direct current (DC) – championed by Thomas Edison – meant noisy and smelly DC power plants needed to be built every mile or two. Years earlier, Tesla had been walking in Budapest when suddenly the rotating magnetic field that would power his revolutionary induction motor appeared like a vision in the air in front of his face.

Manipulating it and improving it in his mind’s eye over the ensuing years, Tesla would eventually build the motor and transformers that he would use to fight the war of the currents. Yes, Tesla won that war, but it was not the only war he would have to fight to protect his inventions.

It was also Tesla, who developed the principles of wireless telegraphy, what we now call radio. Due to a horrific fire that destroyed his laboratory and set Tesla back many years, he lost fame and fortune to the upstart Guglielmo Marconi.

Marconi, after “borrowing” some of Tesla’s patents and racing forward to commercialize radio, went on to receive a Nobel Prize for the “invention” of radio.

While Marconi was commercializing his simplistic variation on Tesla’s work, Tesla was in Colorado Springs developing a more sophisticated wireless transmitter, one that could encode each signal and keep messages private.

Tesla was never to get the credit he deserved. Ironically, it was Marconi, who sued the government many years later, only to have the Supreme Court rule that it was, in fact, Tesla, who had preceded him in patenting the necessary components of a radio. Unfortunately for Tesla, this decision was made after he had passed away.

Marconi, the so called inventor of Radio was awarded Nobel prize for his invention. Interestingly, everything he did was based on the previous works by Tesla.

When Marconi turned world-famous by sending the first transatlantic message, his achievement was met by Tesla’s humble response:

“Marconi is a good fellow. Let him continue. He is using seventeen of my patents.”

So why are we taught about Edison and Marconi and others while history has largely forgotten Nikola Tesla? Some would argue a variety of conspiracy theories in which rich financiers and fearful governments suppressed Tesla’s work.

Others suggest Tesla’s many eccentricities as the reason his funding dried up. Still others point out that Tesla’s ideas were just too far ahead of his times. Perhaps the answer encompasses all of the above. 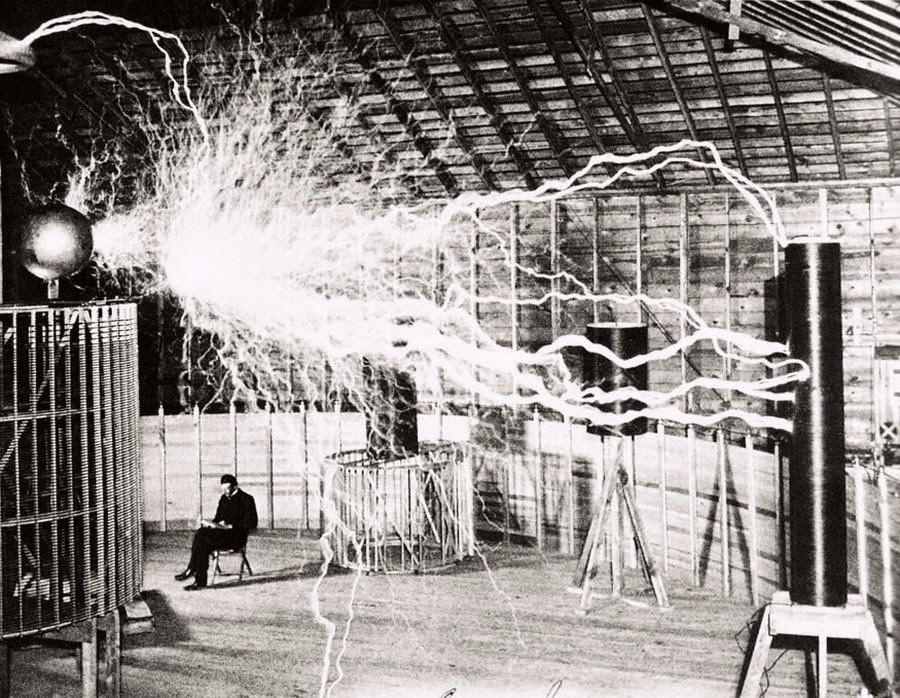 Above: A publicity photo of Nikola Tesla sitting in his laboratory in Colorado Springs in December 1899. The photo was taken by Dickenson V. Alley, photographer at the Century Magazines. The laboratory was built in 1899. Tesla sent a copy of this photograph to Sir William Crookes in England in 1901.

This image was created using “trick photography” via a double exposure. The electrical bolts were photographed in a darkened room. The photographic plate was exposed a second time with the equipment off and Tesla sitting in the chair.

Tesla was certainly a man ahead of his time. In 1919 he foresaw a time when “an inexpensive receiver, no bigger than a watch, will enable [people] to listen anywhere, on land or sea, to a speech delivered or music played in some other place, however distant.” A pipe dream then, but commonplace now with our ubiquitous smartphones. He was ahead of his time as well with his dabbling in communication with other planets.

While in Colorado Springs perfecting his wireless telegraphy, Tesla recorded what he called “faint extraplanetary signals.” This experience in 1899, and his pursuit of further contact, would lead to ridicule at the time but later would lead some to name him the “Father of Radio Astronomy.”

As the 21st century ushers in solar and wind power we are shocked to discover it was Nikola Tesla who over one hundred years ago advocated for the use of renewable energy.

Always interested in the power of nature, nine of Tesla’s patents drove the generators that harnessed the vast power of Niagara Falls, the first large-scale hydroelectric project in the world.

He often spoke of harnessing the energy of the sun, which he called “an inexhaustible source of power,” and stated that fossil fuels were wasteful. He believed that natural sources of energy could “eliminate the need of coal, oil, gas or any other of the common fuels.” This was in 1933!

And he didn’t stop there. He called the windmill a machine that offered us a chance “since time immemorial” to utilize the energy of nature. He developed a system to derive energy from the natural heat of the Earth – geothermal power.

Tesla was friends with naturalist John Muir, the man who founded what would become Yosemite National Park. Muir appreciated that Tesla’s inventions “sought to utilize renewable energy and minimize destruction of natural resources.”

Tesla’s dream was to provide not only wireless communication, but unlimited wireless power accessible from anywhere in the world, and essentially for free

His greatest undertaking was named Wardenclyffe, in what is now Shoreham, Long Island. In addition to a laboratory designed by renowned architect Stanford White, Tesla began work on a 187-foot tall tower capped with a 68-foot hemispherical terminal.

Funded by a $150,000 stake by industrialist J. Pierpont Morgan, the Wardenclyffe tower offered the promise of transatlantic communication and global wireless energy.

Unfortunately, design flaws and delays – plus Marconi’s ill-timed transmission of the letter “S” from England to Canada – eventually led Morgan to withdraw funding. Despite Tesla’s tireless efforts the tower was torn down in 1917 to pay debts. Tesla never gave up on his dream, but to this day it remains unfulfilled.

“It seems I have always been ahead of my time,” Tesla lamented in the 81st year of his life. He lived out the final years in the New Yorker Hotel in Manhattan, venturing out only rarely to feed his beloved pigeons in Bryant Park or on the lion-framed steps of the famed New York Public Library. A sad end to a man who “invented the 20th century.”

Ah, but things are looking up, as Tesla is experiencing a bit of a nostalgic resurgence. An electric car company has helped return Tesla to public consciousness, as are iconic appearances in popular movies and television programs.

Recently the electrifying power of crowdfunding helped raise more than $1 million from excited fans in just over a week. The money enabled a non-profit group to purchase Tesla’s Wardenclyffe laboratory and is now turning it into a museum and science center.

Tesla would be happy his work continues in the minds and activities of countless “coilers” and “Teslians” who hope to make Tesla’s dreams come true.

The man who brought AC power into our homes, developed radio, envisioned wireless transmission of power and light, experimented with x-rays, developed neon lights, invented his namesake Tesla Coil, and even dabbled in direct energy weapons, is rising again. Perhaps the world is finally catching up to the inventive genius that was Nikola Tesla.

David J. Kent is a Marine Biologist, Scientist, Environmental Toxicologist, Photographer, Consultant and Writer. He has been the President of the regional chapters of two international scientific organizations, and has also chaired a variety of scientific groups and conferences. Not only has he written scientific reports, newsletters and blogs, but he also has written the famous book – ‘Tesla: Wizard of Electricity’.

Are You Wasting Your Life? Get Back on Track! Previous post
5,000-Year-Old Medical Treatise, Including Neurosurgery Next post