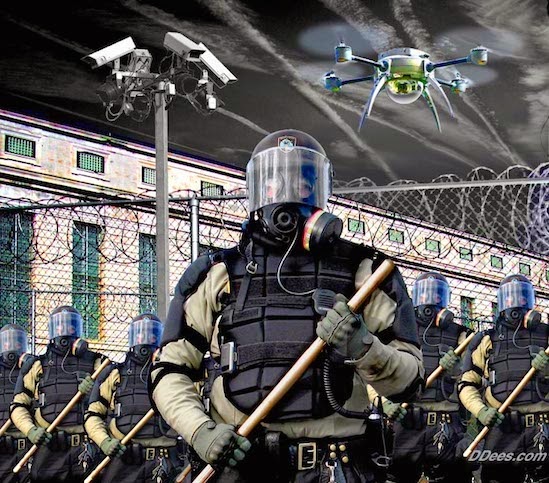 The US Police State is Worse Than Orwell Ever Imagined

The United States pretends to be a home of freedom and democracy. In fact, the US is rapidly degenerating into a police state and a worse dystopia than George Orwell imagined in his book, 1984.

John W. Whitehead describes below the prison that is being constructed for all of us. This prison is the work of many of our fellow citizens including scientists and entrepreneurs who have gained fame and fortune creating a prison for mankind.

What were they thinking as they threw their energy and their lives into constructing a police state dystopia? 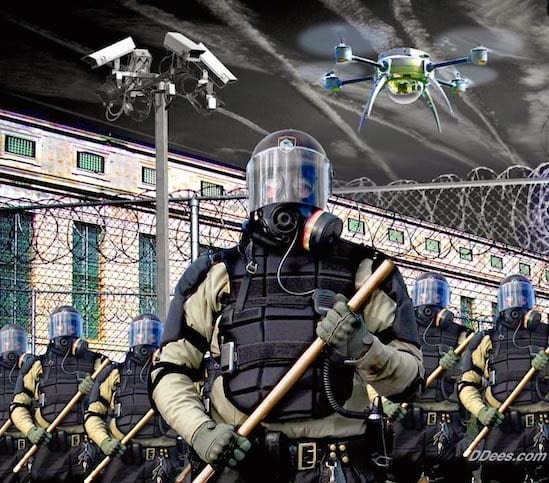 “It’s a future where you don’t forget anything…In this new future you’re never lost… We will know your position down to the foot and down to the inch over time… Your car will drive itself, it’s a bug that cars were invented before computers… you’re never lonely… you’re never bored… you’re never out of ideas… We can suggest where you go next, who to meet, what to read… What’s interesting about this future is that it’s for the average person, not just the elites.” — Google CEO Eric Schmidt on his vision of the future

Time to buckle up your seatbelts, folks. You’re in for a bumpy ride.
We’re hurtling down a one-way road toward the Police State at mind-boggling speeds, the terrain is getting more treacherous by the minute, and we’ve passed all the exit ramps. From this point forward, there is no turning back, and the signpost ahead reads “Danger.”

Indeed, as I document in my book A Government of Wolves: The Emerging American Police State, we’re about to enter a Twilight Zone of sorts, one marked by drones, smart phones, GPS devices, smart TVs, social media, smart meters, surveillance cameras, facial recognition software, online banking, license plate readers and driverless cars—all part of the interconnected technological spider’s web that is life in the American police state, and every new gadget pulls us that much deeper into the sticky snare.

We’re on the losing end of a technological revolution that has already taken hostage our computers, our phones, our finances, our entertainment, our shopping, our appliances, and now, it’s focused its sights on our cars.

As if the government wasn’t already able to track our movements on the nation’s highways and byways by way of satellites, GPS devices, and real-time traffic cameras, government officials are now pushing to require that all new vehicles come installed with black box recorders and vehicle-to-vehicle (V2V) communications, ostensibly to help prevent crashes.

Yet strip away the glib Orwellian doublespeak, and what you will find is that these black boxes and V2V transmitters, which will not only track a variety of data, including speed, direction, location, the number of miles traveled, and seatbelt use, but will also transmit this data to other drivers, including the police, are little more than Trojan Horses, stealth attacks on our last shreds of privacy, sold to us as safety measures for the sake of the greater good, all the while poised to wreak havoc on our lives.

Black boxes and V2V transmitters are just the tip of the iceberg, though. The 2015 Corvette Stingray will be outfitted with a performance data recorder which “uses a camera mounted on the windshield and a global positioning receiver to record speed, gear selection and brake force,” but also provides a recording of the driver’s point of view as well as recording noises made inside the car.

As journalist Jaclyn Trop reports for the New York Times:

“Drivers can barely make a left turn, put on their seatbelts or push 80 miles an hour without their actions somehow, somewhere being tracked or recorded.”

Indeed, as Jim Farley, Vice President of Marketing and Sales for Ford Motor Company all but admitted, corporations and government officials already have a pretty good sense of where you are at all times:

Now that the government and its corporate partners-in-crime know where you’re going and how fast you’re going when in your car, the next big hurdle will be to know how many passengers are in your car, what contraband might be in your car (and that will largely depend on whatever is outlawed at the moment, which could be anything from Sudafed cold medicine to goat cheese), what you’re saying and exactly what you’re doing within the fiberglass and steel walls of your vehicle. That’s where drones come in.

Once drones take to the skies en masse in 2015, there will literally be no place where government agencies and private companies cannot track your movements. These drones will be equipped with cameras that provide a live video feed, as well as heat sensors, radar and thermal imaging devices capable of seeing through the walls of your car.

Some will be capable of peering at figures from 20,000 feet up and 25 miles away. They will be outfitted with infrared cameras and radar which will pierce through the darkness. They can also keep track of 65 persons of interest at once. Some drones are already capable of hijacking Wi-Fi networks and intercepting electronic communications such as text messages.

The Army has developed drones with facial recognition software, as well as drones that can complete a target-and-kill mission without any human instruction or interaction. These are the ultimate killing and spying machines. There will also be drones armed with “less-lethal” weaponry, including bean bag guns and tasers.

And of course all of this information, your every movement—whether you make a wrong move, or appear to be doing something suspicious, even if you don’t do anything suspicious, the information of your whereabouts, including what stores and offices you visit, what political rallies you attend, and what people you meet—will be tracked, recorded and streamed to a government command center, where it will be saved and easily accessed at a later date.

By the time you add self-driving cars into the futuristic mix, equipped with computers that know where you want to go before you do, you’ll be so far down the road to Steven Spielberg’s vision of the future as depicted in Minority Report that privacy and autonomy will be little more than distant mirages in your rearview mirror.

The film, set in 2054 and based on a short story by Philip K. Dick, offered movie audiences a special effect-laden techno-vision of a futuristic world in which the government is all-seeing, all-knowing and all-powerful. And if you dare to step out of line, dark-clad police SWAT teams will bring you under control.

Mind you, while critics were dazzled by the technological wonders displayed in Minority Report, few dared to consider the consequences of a world in which Big Brother is, literally and figuratively, in the driver’s seat. Even the driverless cars in Minority Report answer to the government’s (and its corporate cohorts’) bidding.

Likewise, we are no longer autonomous in our own cars. Rather, we are captive passengers being chauffeured about by a robotic mind which answers to the government and its corporate henchmen. Soon it won’t even matter whether we are seated behind the wheel of our own vehicles, because it will be advertisers and government agents calling the shots.

Case in point: devices are now being developed for European cars that would allow police to stop a car remotely, ostensibly to end police chases. Google is partnering with car manufacturers in order to integrate apps and other smartphone-like technology into vehicles, in order to alert drivers to deals and offers at nearby businesses.

As Patrick Lin, professor of Stanford’s School of Engineering, warns, in a world where third-party advertisers and data collectors control a good deal of the content we see on a daily basis, we may one day literally be driven to businesses not because we wanted to go there, but because someone paid for us to be taken there.

Rod Serling, creator of the beloved sci fi series Twilight Zone and one of the most insightful commentators on human nature, once observed:

“We’re developing a new citizenry. One that will be very selective about cereals and automobiles, but won’t be able to think.”

Indeed, not only are we developing a new citizenry incapable of thinking for themselves, we’re also instilling in them a complete and utter reliance on the government and its corporate partners to do everything for them—tell them what to eat, what to wear, how to think, what to believe, how long to sleep, who to vote for, whom to associate with, and on and on.

In this way, we have created a welfare state, a nanny state, a police state, a surveillance state, an electronic concentration camp—call it what you will, the meaning is the same: in our quest for less personal responsibility, a greater sense of security, and no burdensome obligations to each other or to future generations, we have created a society in which we have no true freedom.

Pandora’s Box has been opened and there’s no way to close it. As Rod Serling prophesied in a Commencement Address at the University of Southern California in March 17, 1970:

“And if we don’t listen to that scream – and if we don’t respond to it – we may well wind up sitting amidst our own rubble, looking for the truck that hit us – or the bomb that pulverized us. Get the license number of whatever it was that destroyed the dream. And I think we will find that the vehicle was registered in our own name.”

Yet, while the vehicle bearing down upon us is indeed registered in our own name, we’ve allowed Big Brother to get behind the wheel, and there’s no way to put the brakes on this runaway car.

About author: Paul Craig Roberts was Assistant Secretary of the Treasury for Economic Policy and associate editor of the Wall Street Journal. He was columnist for Business Week, Scripps Howard News Service, and Creators Syndicate. He has had many university appointments. His internet columns have attracted a worldwide following.