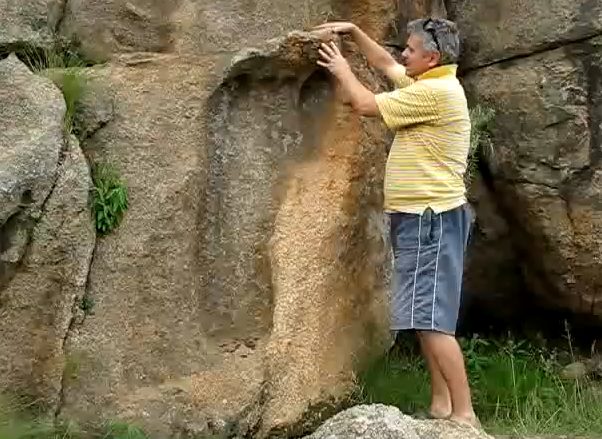 South African Author, Scientist, Researcher and Explorer Michael Tellinger (often called ‘The South African Indiana Jones’) shows off what could be one of the best pieces of evidence that there were once giants living on Earth a long, long time ago.

Geologists have been marveling at this giant foot print in rough granite, about 4 feet long. Some still say that it is a natural erosion pattern, but for now it’s hard to say.

Prof. Pieter Wagener from UPE, suggests that “there is a higher probability of little green men arriving from space and licking it out with their tongues, than being created by natural erosion.” 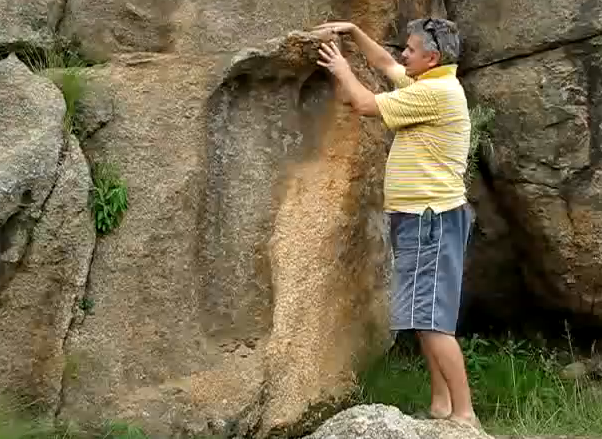 It is located in South Africa, near the town of Mpaluzi, close to the Swaziland border.

It is estimated to be between 200 million and 3 Billion years old because of our current understanding of the formation of granites in Earth’s history. This dating immediately causes great debate and argument – so I urge you to keep your mind open and focused on the evidence.

This amazing footprint in granite was discovered in 1912 by a hunter called Stoffel Coetzee, while hunting in the remote area. At the time this was a deeply remote part of South Africa known as the Eastern Transvaal, teeming with wildlife, including antelope and lions.

It remains in the same condition as it was when first discovered and the possibility that this was a carved hoax is extremely low because of its remote location.

Even today, it is difficult to find. The real mystery is how this amazing phenomenon occurred – I have no idea – but here it is and we cannot wish it away. YES – It is granite – it is a well recognised geological part of South Africa and recorded on all geological maps – that is why this footprint is such an incredible mystery.

It can be described as a “phenocrystic” granite, OR coarse porphyritic granite, that underwent several different stages of cooling. The result being an interesting mixture of large and small granules. This is why granite companies are keen to mine this area for granite because it will look really “pretty” when polished.

In the official Geology Of South Africa, this outcrop is called Mpuluzi Batholith (Granite) and the official dating of this rock produced dates of around 3,1 billion years.


This is a real mystery that needs close scientific examination. I’ve included a second video below, so you can hear more about it. If you want even more, make sure to do some research into Michael’s work. Much of it is truly mind blowing, especially when it comes to ancient Stone Circles and what are believed to be Annunaki gold mines.
[Above: Professor Francis Thackeray shows Michael Tellinger and friends the rarely seen part of the upper leg bone with hip joint of a giant that would have stood about 12 feet or 3,5 metres tall.

This bone has been in the vaults of of the medical school at WITS University, Johannesburg since the early 1960s, when it was found by miners in a mine in northern Namibia. It is one of the most precious and rare specimens available today that clearly indicate the existence of giants in Southern Africa more than 40,000 years ago.

Michael shares this video clip as part of his continued research into the origins of humankind, the vanished civilisations of southern Africa and the strange anomalies we discover on this journey].