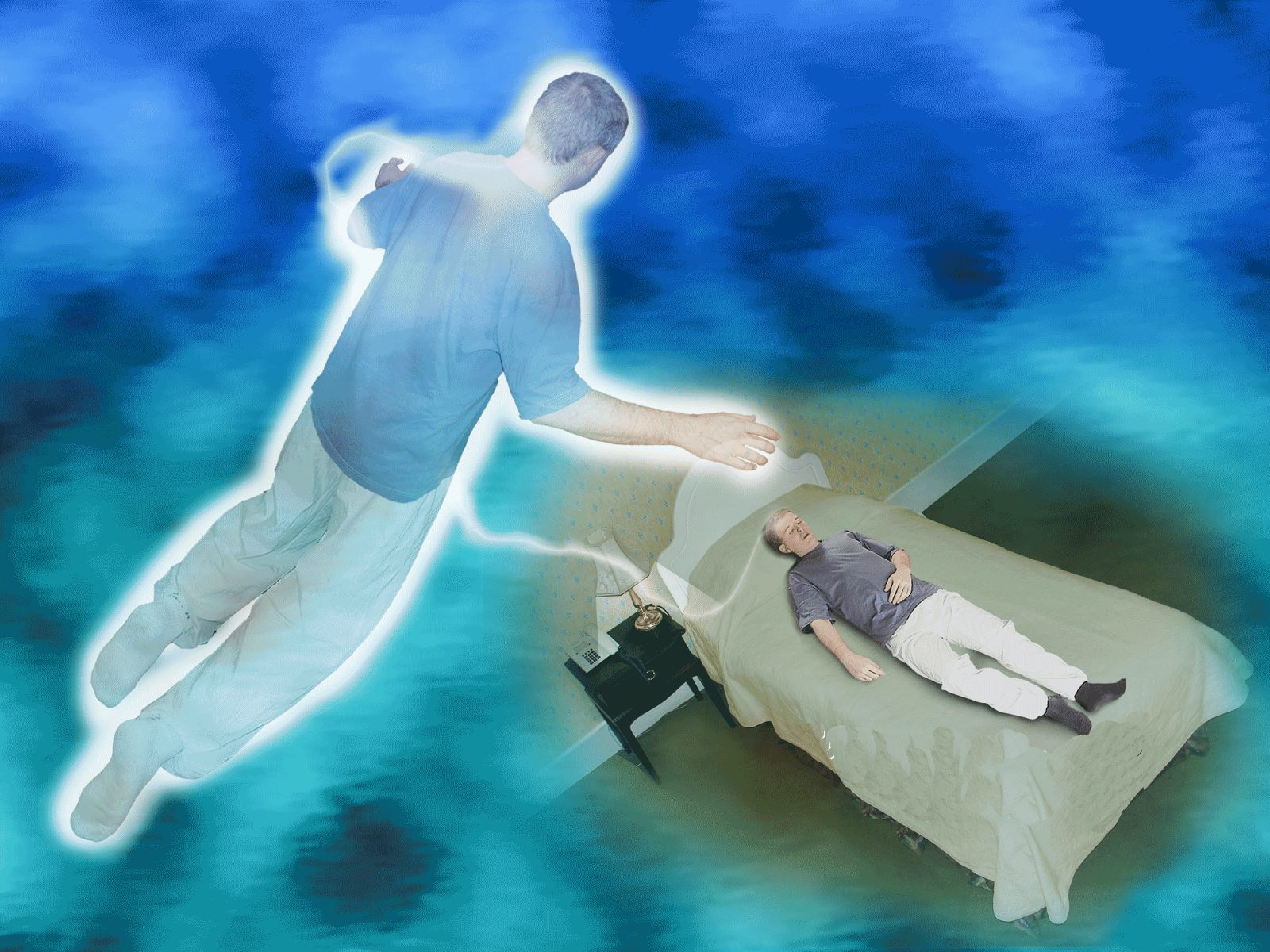 Science and Healing Through Astral Projection

The term astral projection may still receive some frowned eyebrows from the spiritually uneducated public, and if you are new to it, I would like to 1st offer a recap on what this wonderful ability each and every human being possesses is – astral projection is a term used for the travelling of consciousness outside of the physical body(either consciously or spontaneously), also popularly called an out-of-body experience (OBE).

A few examples of spontaneous projections are dreams, during meditation or after being “knocked out” (yes, the real reason a person loses consciousness after suffering a mighty blow to the head is simply due to the astral body being knocked out of the physical body). The person will literally see stars because he will find himself out of his body in the realm of light in the astral plane. 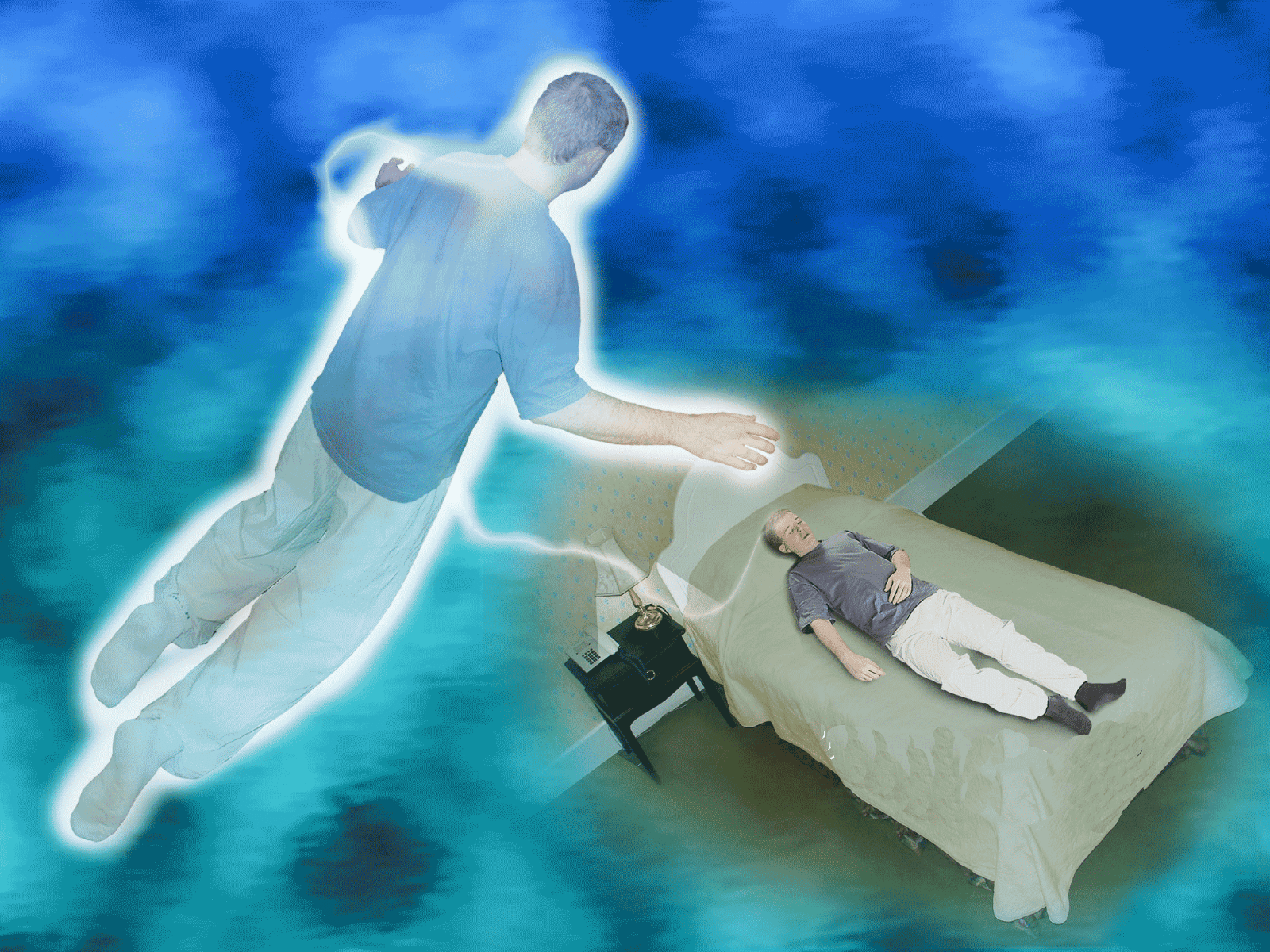 In  the physical world we only see objects by reflected light. In the astral world we see objects because they have their own light… Therefore the astral plane contains more light than the physical and so, more enlightenment is possible here. At night, if you are in your astral body in your room, all the objects will clearly be visible even on the darkest of nights.

The word astral comes from the Greek word astrum, which means star. The astral world therefore means the starry world and the astral plane is the starry plane or plane of light. In this world spirits are visible because their astral bodies give out their own light. Indeed, we are all clairvoyant once we tune into this plane of existence for learning and receiving guidance.

Conscious astral travel is a skill very few people master but it is possible and unlike spontaneous travel which is usually remembered faintly and obscurely, the experience resulting from consciously travelling is remembered 100%, as the brain remains active as if in a wakeful state, and a person can literally choose whatever he or she wishes to do whether it be to see the world, spy, learn new skills or commune with higher divine entities or deceased loved ones.

In ancient Buddhism & Taoist religion, one of the end goals to living the spiritual path is to separate the spirit from the physical body while you are still alive, but this is only possible once you have built your spirit up to a very high level.

The ignorant close-minded public shove this wonderful ability down the toilet due to cognitive dissonance but the truth is that most of the masses just lack spiritual understanding, dreams at night are OBE’s that potentially offer insight, learning, divine guidance and even healing from the astral plane.

It is also important to note that travelling mostly occurs when lying on the back with the legs and arms uncrossed, when arms or legs are crossed then you are disturbing the natural polarity of the body, which may play a part in preventing travelling. If you are fond of sleeping on your stomach then you might of never travelled as much as a person using the back-rest position.

The reason for this is simply because when you lie on your stomach the chakras act as anchoring pins between the physical and the astral and prevents the astral body from disengaging. Why do you think pilots lie on their stomachs when they have to subject their bodies to great g-forces? It anchors you to the physical.

On the physical plane we are surrounded by dead, inanimate matter that does not appear to have enough intelligence to be able to follow instructions. On the astral plane we are surrounded by matter that is intelligent enough to know what we want from it and it is willing to comply, given that you are balanced emotionally & mentally, the downside is it can be a frightening place if you cannot control your emotions and thoughts, hence the manifestation of disturbing dreams or nightmares.

The fingers are thought to be the physical body’s antennae for interacting with the world and provided the ideal bodypart for direct electrophotographic research. Much the same as Kirlian photography (high-voltage photography), in this method a film is used on which the finger is in direct contact with, so that the corona discharge of the finger self can be recorded.

A study involving the right index finger on a pad of film called the right index finger pad, a few years ago funded by the U.S. Army Missile Research and Development Command initially in 1977, for the purposes of testing the stability of military personnel in forward positions, sparked interest from the Parapsychology Foundation of New York(PFNY).

Later a six-month follow-on  project in 1985 by the PFNY investigated the individual differences in electrophotographic patterns and related those characteristics  to other viables, including the effect of the out-of-body state, on the electrographic recordings.

Very interesting revelations were revealed during the studies of the corona effect, profound changes in the corona-discharge pattern occurred while subjects were under altered states, e.g. the out-of-body state. 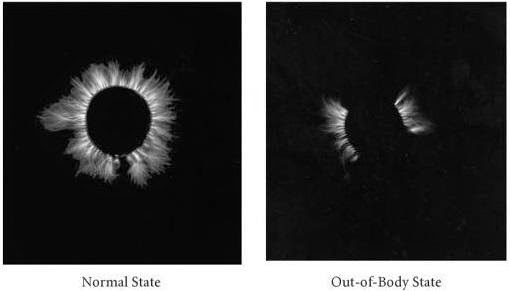 “Recordings of all subjects that successfully entered the out-of-body state revealed a common trend in the electrophotographs, the corona-discharge surrounding the right index finger pad separated to form two distinct parts, a phenomenon called the broken-corona effect.”

“Although our research included investigations of other altered states, such as hypnosis and past life regression, the broken-corona effect was noted only for the out-of-body state, a finding that suggests that the out-of-body state is unlike any other mental or psychological state”  – Carl Llwellyn Weschcke

“When the out-of-body state ended, the broken-corona effect disappeared, and the electrophotographic pattern returned to normal.” – Carl Llwellyn Weschcke

“Sometimes a feature known as Remote-Image phenomenon would show up in electrophotographs of both male and female subjects. This feature consists of a small intense point of light or a cluster-like image, both appearing beyond the normal area of corona-discharge activity.

“Due to it appearing outside the subject’s normal range of electrophotographic pattern, this phenomenon could arguably signal an external astral influence, including the possible presence of a ministering guide or guardian entity, sometimes rarely, two remote images appear in the same electrophotograph, which denotes the presence of two astral entities or influences.

“Our research found that the remote-image phenomenon occurs with far greater frequency in the photographs of subjects immediately before they enter the out-of-body state. Arguably at least, this could be due to the fact that the out-of-body state seems to facilitate a variety of empowerment interactions with the astral realm and its facilitating entities.

“The astral Realm, possibly in anticipation of that interaction, responds even before the out-of-body state is induced – this suggests that the astral realm is poised and ready to provide support and guidance during the out-of-body experience…” – Carl Llwellyn Weschcke, Astral projection for Psychic Empowerment 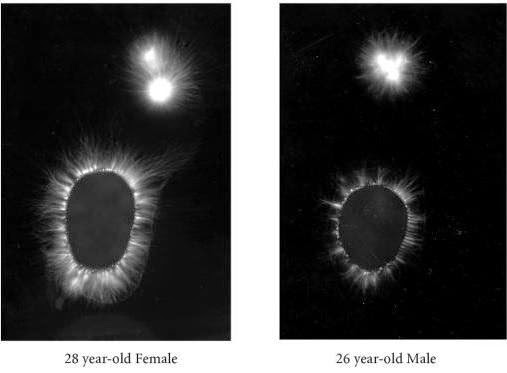 I have recently also read an very fascinating article on http://earthweareone.com/what-a-shaman-sees-in-a-mental-hospital/ about a shaman called Malidoma Patrice Somé from Burkino Faso that claims that mental disorders are spiritual emergencies.

“What those in the West view as mental illness, the Dagara people regard as good news from the other world. The person going through the crisis has been chosen as a medium for a message to the community that needs to be communicated from the spirit realm. Mental disorder, behavioral disorder of all kinds, signal the fact that two obviously incompatible energies have merged into the same field,” says Dr. Somé.

These disturbances result when the person does not get assistance in dealing with the presence of the energy from the spirit realm.

I believe this to be the same concept as divine astral intervention, which is being killed by psychotic drugs in the western world, the article is worth a read. This is a very good time to be alive because everyday we are learning more and more about what we perceive our reality to be.

Once you are able to tap into the astral source, your potential can rise infinitely, its only up to you whether you want to empower yourself even more in the Realm of Light.

References: If you are interested in astral projection, please support Carl Llwellyn Weschcke and Joe H. Slate and buy their book here.

St Louis Archbishop 'I Didn't Know it Was Illegal for Priests to Have Sex With Children' Previous post
You're Insane to Think GMOs Are Safe! Next post