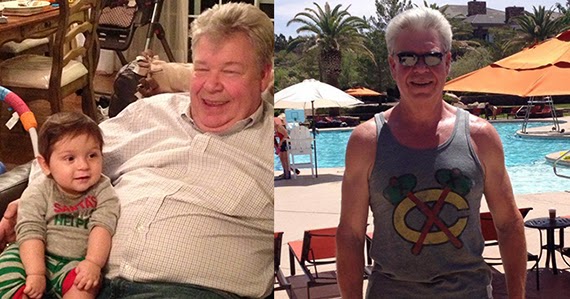 Testimony: Overcoming a Life of Junk Food and Sickness by Adopting a Plant-Based Diet

For years, I lived the fat life… big rare T-bones, grilled lamb chops, dirty martinis, fried calamari appetizers, large pieces of chocolate cake, and often a pack-a-day habit. By 2012 I had blossomed to 242 pounds and was sporting a 42-inch waist.

Several years earlier, my cardiologist had diagnosed me with coronary artery disease and high blood pressure, which led to a daily regimen of three cholesterol pills, two blood pressure pills, and an aspirin.

I also suffered from a hiatal hernia and had prostate cancer, which I fortunately caught early and had surgically removed. (I have been cancer free for over 5 years.) 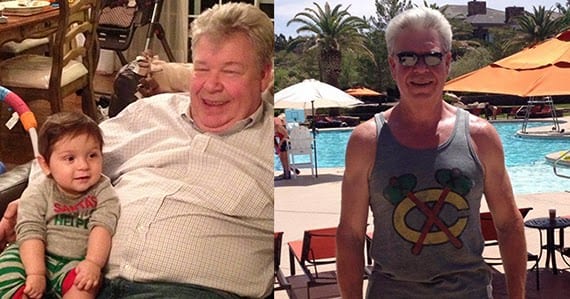 As 2013 rolled around I was facing my 60th birthday, and the mirror showed me a sad sight. Like most Americans, I made a New Year’s resolution to get into shape before my birthday on May 16th. I started a basic cardio and weight-training routine in a small dusty gym in my basement.

To entertain and motivate myself, I started watching Netflix documentaries while I exercised. When I came across Forks Over Knives in July of 2013, I was awestruck by the scientific evidence presented by professionals with clinical and academic credentials, demonstrating the ills of the western diet.

Shortly thereafter, I watched The Extended Interviews and then read Drs. Esselstyn and Cambpell’s books, cover to cover.

I then began my journey to a whole-food, plant-based (WFPB) lifestyle. I started with lunches at a local Chicago restaurant called the Protein Bar, which served a WFPB burrito, chili, and salads. And I began making myself simple breakfast meals with a base of oatmeal.

Late in the summer of 2013, while driving through Nebraska, I stopped at a McDonald’s to buy some coffee. As fate would have it, a tall and lean 50-something cowboy struck up a conversation, and he asked, “You didn’t eat anything in that restaurant, did you?”

I replied no, and he said, “Good … because you don’t even want to know what is in that meat!”

He then explained that he worked at a large feedlot, describing what he had seen in the cattle feed, how they were treated, and more. Although he did not espouse plant-based eating, I saw him as a godsent messenger guiding me to stay on this path. I then resolved to go WFPB for all my meals ― and the rest of my life.

Once converted, the pounds just fell off of me. In the fall of 2013, my cardiologist measured my total cholesterol at 94 and my triglycerides at half their previous level, so he took me off of one of the cholesterol pills.

In December, he took me off another pill. At my annual physical shortly thereafter he pronounced me the healthiest I have been in many years.

This year (2014), I have ramped up my exercise routine and work out often at a fitness club. I do an hour of cardio, an hour of weights and 20 minutes of stretching, five to six days a week. A forty-something physician and fellow gym rat recently remarked that he could only hope to keep up with my routine!

Today, my weight fluctuates between 192 and 196 (down 50 pounds), and at 33 inches my waist is nine inches trimmer! I have added many pounds of lean muscle mass to my frame and have been sick only once since going WFPB, the day after I cheated and had some meat late last year; I thought I had contracted food poisoning. Needless to say, I have not cheated since.

Thank you for your film, which truly did change my life!