Abby Martin interviews author and philosopher, Graham Hancock, about the mysteries of ancient civilization, hidden societies from the past, censorship by TED Talks and the difficulty in getting these ideas accepted by mainstream archaeologists and historians.

“Science has often resisted new ideas and fought bitterly to prevent them coming on board.” – Graham Hancock

Abby Martin: Graham, what’s a more modern day example of a theory once considered outrageous, that turned out to be factually supported by evidence?

Graham Hancock: For example, the continental drift [theory], which everybody is familiar with today and which we regard as a fact. (…)

When Alfred Wegener proposed the theory of plates tectonic continental drift back in the early 1900’s (…) he was ridiculed, humiliated, accused of being a madman, the idea was seen to be patently absurd and another 30 years past before the idea was accepted, and of course, we all regard it as plain fact and obvious.

But that poor individual had to go through a humiliating public pillory because he was proposing an idea that turned out to be completely correct.

AM: Amazing! You’ve also said that there is a ‘Mother Culture’ from which all ancient historical civilizations spring from. Can you explain what that culture entails?

GH: Again, let me be clear. I am proposing an idea for discussion, I am not claiming that I am in possession of some indisputable fact. I think we should consider the possibility of a forgotten episode in human history.

Now, of course, academic historians and archaeologists do a kind of belly laugh whenever one mentions the word Atlantis, but let’s not forget that the last surviving reference to Atlantis comes down to us from the Greek philosopher Plato, and he tells us that 9,000 years before the time of Solon – which is 9,600 BC or 11,600 years ago – a great civilization was destroyed in cataclysmic floods and earthquakes and vanished beneath the sea.

He said that disaster was so complete that humanity was obliged to begin again like children, with no memory of what went before. It just so happens that Plato’s date – 11,600 years ago, 9,600 BC in our calendar – fits exactly with an episode called the Younger Dryas, which geologists recognize, which did culminate in dramatic flooding and earthquakes.

It’s really odd if Plato made the whole thing up and managed to pick a date that fits perfectly with modern geological understanding of cataclysmic events at the end of the last Ice Age.

By the way, you have to know that the story of Atlantis comes to us from Plato, but there is an identical story in India, for example. In fact, the story is repeated with different names, all around the world.

The suggestion is that there were survivors of the cataclysmic collapse of that prehistoric civilization and that those survivors settled in various points around the world – in Egypt, in South America, in Mexico, in Mesopotamia, and so on – and sought to preserve and protect the knowledge that their civilization has built up, to create some kind of institution which would pass it down to the future, and this is the remote common origin that explains the similarities between these widely separated ancient cultures. (…)

There are ancient maps from well before the 1700’s, which show the world:
a). as it looked during the last ice age, and
b). which have highly accurate longitudes.

For example, the famous Piri Reis map [bellow]. The Turkish Admiral Piri Reis tells us in his own handwriting on his map that he based it on more than 100 older source maps, that he believed to have come from the Library of Alexandria… he incorporated extremely accurate longitudes, which we must then conclude, were present on those older source maps. 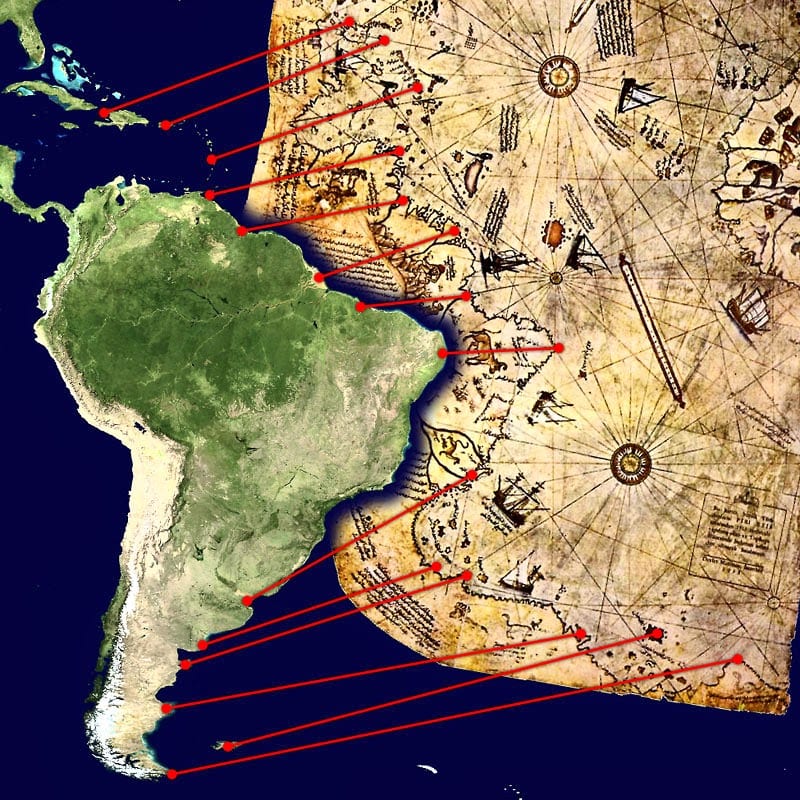 AM: I wanna get into your TED talk last year, called “The War on Consciousness” that was pulled off YouTube [included bellow]… Were you surprised that your wildly popular talk was pulled and what does it say about the institution of TED, which is portrayed as this beacon of free academic thought?

GH: It was a great disappointment to me because I’ve had the highest opinion of TED prior this.

Myself and my colleague, Rupert Sheldrake, gave talks at the TEDx conference in London and both of those talks considered what would be regarded, perhaps, as extraordinary possibilities about consciousness by the main stream science, and both of those talks were consequently deleted from the TEDx YouTube channel and then, because it was a massive outcry across the internet about this act that was seen as censorship, TED re-installed them in what my friend, Rupert, calls the ‘naughty corner’ on their own website where, with great difficulty, they could be found and seen again and commented upon.

The reason that TED gave for pulling our talks, they said it was because our talks were not in accord with the main stream science, but every single reason that they gave for saying that, they subsequently had to delete – and if you go to the relevant website now you’ll find that TED’s original critiques of us are all crossed out by TED themselves, and our reputations are published there, but still they refuse to put the talks back on YouTube.

Interview transcript by Alexander Light, HumansAreFree.com. You can watch the complete interview bellow:

THIS is One of the World's Leading Pollution Source - And it's Worse Than Burning Fossil Fuels! Previous post
New TEDx: The Best Choice I've Ever Made? Dropping College and Doing What I Love Next post