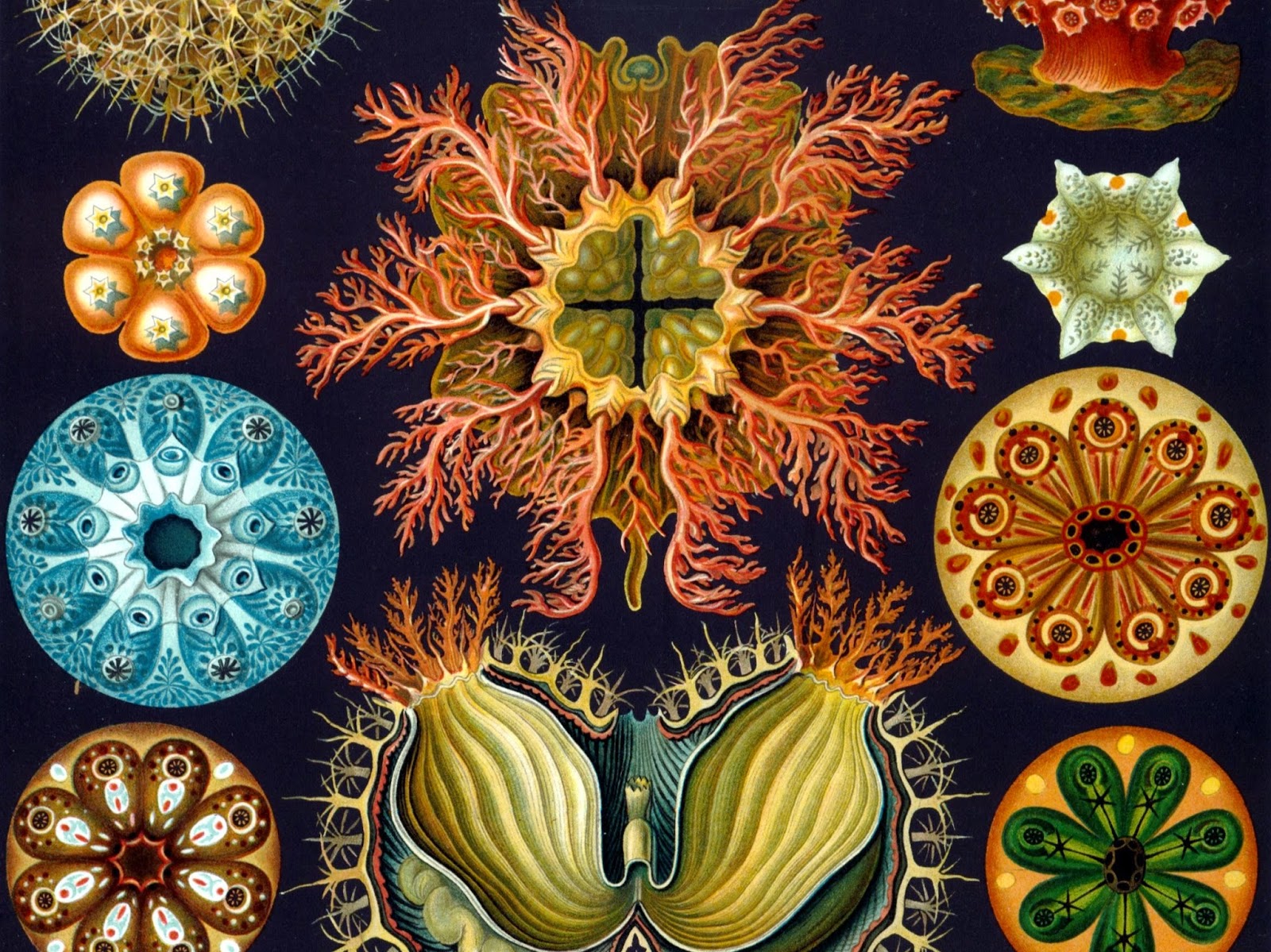 The word morphic comes from the Greek morphe, meaning form. Morphic fields organise the form, structure and patterned interactions of systems under their influence – including those of animals, plants, cells, proteins, crystals, brains and minds. They are physical in the sense that they are part of nature, though they are not yet mentioned in physics books.

All self-organising systems are wholes made up of parts which are in turn lower-level wholes themselves – such as organelles in cells, cells in tissues, tissues in organs, organs in organisms, organisms in social groups.

At each level, the morphic field gives each whole its characteristic properties, and coordinates the constituent parts. 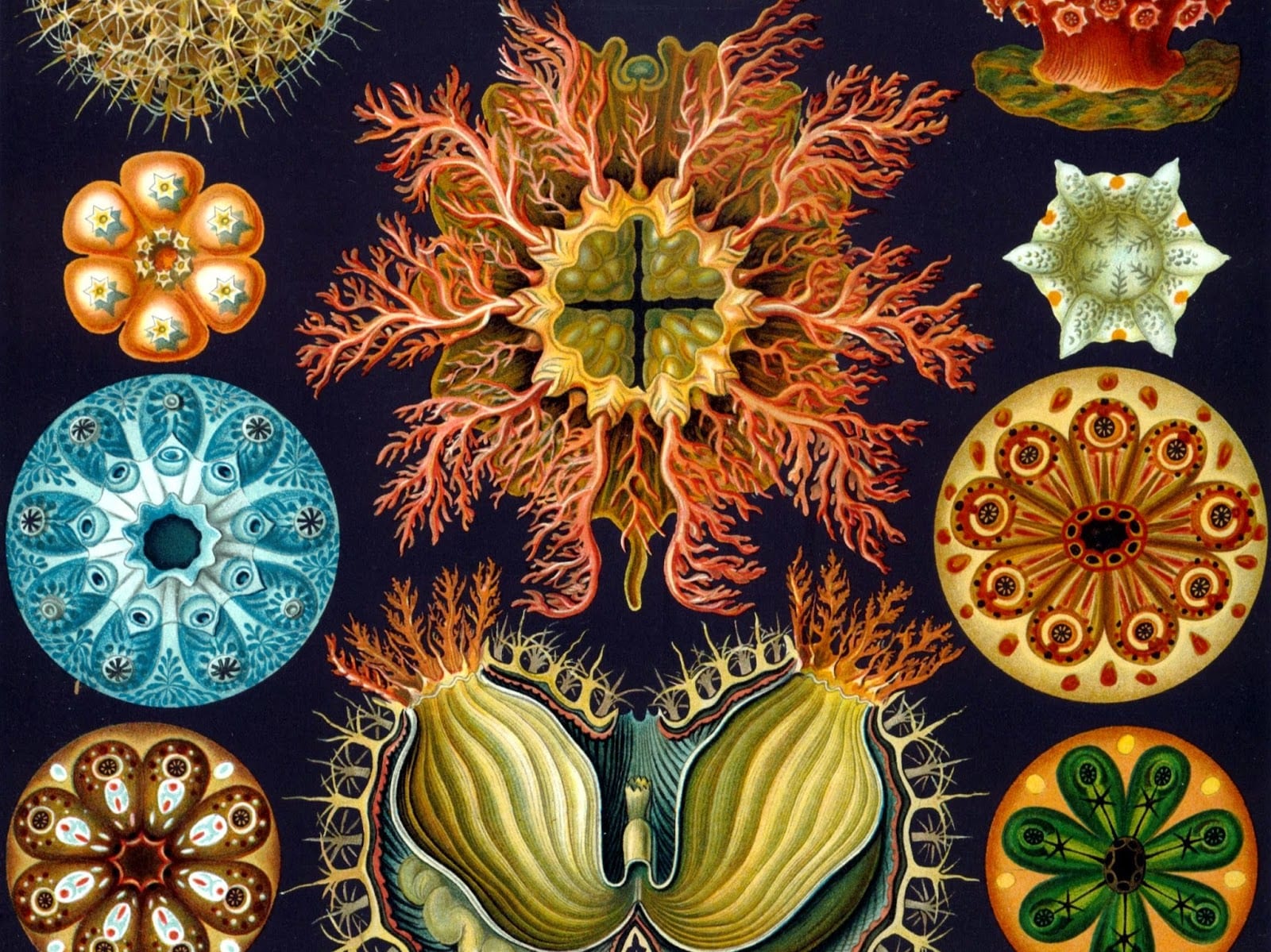 The fields responsible for the development and maintenance of bodily form in plants and animals are called morphogenetic fields.

Morphic fields are located within and around the systems they organise. Like quantum fields, they work probabilistically. They restrict, or impose order upon, the inherent indeterminism of the systems under their influence.

For example, of the many direction in which a fish could swim or a bird fly, the social fields of the school or flock restrict the behaviour of the individuals within them so they move in coordination with each other rather than at random. [2]

The most controversial feature of this hypothesis is that the structure of morphic fields depends on what has happened before. Morphic fields contain a kind of memory. Through repetition, the patterns they organise become increasingly probable, increasingly habitual. The force these fields exert is the force of habit.

Whatever the explanation of its origin, once a new morphic field, a new pattern of organisation, has come into being, the field becomes stronger through repetition. The more often patterns are repeated, the more probable they become.

The fields contain a kind of cumulative memory and become increasingly habitual. All nature is essentially habitual. Even what we view as the fixed “laws of nature” may be more like habits, ingrained over long periods of time.

The means by which information or an activity-pattern is transferred from a previous to a subsequent system of the same kind is called morphic resonance. Any given morphic system, say a squirrel, “tunes in” to previous similar systems, in this case previous squirrels of its species.

These influences do not to fall off with distance in space or time. The greater the degree of similarity of the systems involved, the greater the influence of morphic resonance.

Morphic resonance gives an inherent memory in fields at all levels of complexity. In the case of squirrels, each individual squirrel draws upon, and in turn contributes to, a collective or pooled memory of its kind. In the human realm, this kind of collective memory corresponds to what the psychologist C.G. Jung called the collective unconscious.

Morphic resonance should be detectable in the realms of physics, chemistry, biology, animal behaviour, psychology and the social sciences.

Long-established systems, such as zinc atoms, quartz crystals, insulin molecules and muscle cells are governed by strong morphic fields, with deep grooves of habit established over millions of years, and consequently little change can be observed over a few weeks, or even years, of research. They behave as if they are governed by fixed laws.

By contrast, new systems should show an increasing tendency to come into being the more often they are repeated. They should become increasingly probable; they should happen more easily as time goes on.

For example, when a new chemical compound is synthesized by research chemists and crystallised, it may take a long time for a crystal to form for the first time. There is no preexisting morphic field for the lattice structure.

But when the first crystals form, they will make it easier for similar crystals to appear anywhere in the world. The more often the compound is crystallised in one place, the easier it should be to crystallise elsewhere.

New compounds do indeed tend to crystallise more easily the more often they are made. Chemists usually explain this effect in terms of crystal “seeds” from the new crystals spreading around the world as invisible dust particles in the atmosphere, or chemists learning from others how to do it.

But the hypothesis of morphic fields predicts that this should happen anyway under standardised conditions, even if dust particles are filtered out of the air.

There are several possible ways in which the hypothesis of morphic fields can be, and has been, investigated by experiment. Some tests attempt to detect the fields as they link together different parts of a system in space; others look for the effects of morphic resonance over time.

The easiest way to test for morphic fields directly is to work with societies of organisms. Individual animals, for example, can be separated in such a way that they cannot communicate with each other by normal sensory means.

If information still travels between them, this would imply the existence of interconnections of the kind provided by morphic fields. The transfer of information through morphic fields could help provide an explanation for telepathy, which typically takes places between members of groups who share social or emotional bonds.

One promising area for this kind of research concerns telepathy between people and domesticated animals, as discussed in my book Dogs That Know When Their Owners Are Coming Home.

For example, many dogs and cats seem to know when their owners are returning, even when they come at non-routine times in unfamiliar vehicles such as taxis, and when no one at home knows when they are on the way. The animals seem to be responding telepathically to their owners’ intentions. [3]

The unsolved problems of animal navigation, migration, and homing may also depend on invisible fields connecting the animals to their destinations. [4] In effect, these could act like invisible elastic bands linking them to their homes, which serve as “attractors.” [5]

(In the branch of mathematics known as dynamics, attractors represent the limits toward which dynamical systems are drawn.)

The build-up of habits can be observed experimentally only in the case of new patterns of development and of behaviour.

There is already evidence from experiments on fruit flies that morphic resonance occurs in developing organisms. When fruit fly eggs were exposed to a chemical (diethyl ether), some of them developed abnormally, turning into flies with four wings instead of two. When this treatment was repeated generation after generation, more and more flies developed four wings, even if their ancestors had never been exposed to the chemical. [6]

There is much circumstantial evidence that animal behaviour can evolve rapidly as if a collective memory is building up through morphic resonance. In particular, large-scale adaptations have occurred in the behaviour of domesticated animals all over the world.

One example concerns cattle guards. Ranchers throughout the American West have found that they can save money on cattle guards by using fake ones instead, consisting of stripes painted across the road.

Real cattle guards are made of a series of parallel steel tubes or rails with gaps in between, which make it difficult for cattle to walk across them, and painful to try.

However, present-day cattle do not usually even try to cross them. The illusory guards work just like the real ones. When cattle approach them, they “put on brakes with all four feet,” as one rancher expressed it to me.

Even calves encountering them for the first times avoid them just as much as cattle previously exposed to real guards, even if they have never seen cattle guards before. [7]

This aversion may well depend on morphic resonance from previous members of the species that have learned to avoid cattle guards the hard way.

There are also data from laboratory experiments on rats and other animals implying that such effects occur. In one series of experiments rats learned how to escape from a water maze. New batches of rats were tested month by month, year by year. As time went on, rats in laboratories all over the world escaped more and more quickly. [8]

Some physicists have been intrigued by the possible connections between morphic fields and quantum theory, including John Bell (of Bell’s theorem) and David Bohm, whose theory of the implicate order, based on the non-locality of quantum systems, turned out to be extraordinarily compatible with the idea of morphic fields. [9]

But it is still not clear exactly how morphic fields might fit in with quantum physics, if only because the implications of quantum theory for complex systems like cells and brains are still unknown.

Morphic resonance has many implications for the understanding of human learning, including the acquisition of languages. Through the collective memory on which individuals draw, and to which they contribute, it should in general be easier to learn what others have learned before.

Morphic fields could revolutionise our understanding of cultural inheritance, and the influence of the ancestors. Richard Dawkins has given the name “meme” to “units of cultural transmission,” [12] and memes can be seen as cultural morphic fields. Morphic resonance also sheds new light on many religious practices, including rituals. [13]

The hypothesis of morphic fields has far-reaching implications in all branches of science. In particular, it points to a new understanding of the nature of the mind, which no longer needs to be seen as confined to the inside of the head.

Just as magnetic fields extend beyond the surface of a magnet, and electromagnetic fields beyond a cell phone, so the mind extends beyond the brain through mental fields. When we look at something, say a tree, the image of the tree is projected out through these fields to the place where the tree actually is. Our minds touch what we are looking at.

This provides an explanation for our ability to sense when someone is looking at us from behind. There is now much evidence for the reality of this sense, discussed in my recent book The Sense of Being Stared At, And Other Aspects of the Extended Mind. [14]

But the hypothesis of morphic fields has an inherent limitation. It helps explain how patterns of organisation are repeated; but it does not explain how they come into being in the first place.

It leaves open the question of evolutionary creativity. This hypothesis is compatible with several different theories of creativity, ranging from the idea that all novelty is a matter of chance, to explanations in terms of divine creative power. [15]

Evolution, like our own lives, is an interplay between habit and creativity.

A new, completely revised edition of Rupert Sheldrake’s book on morphic fields and morphic resonance A New Science of Life was published by Icon Books (UK) and by Inner Traditions (US) under the title Morphic Resonance.

1. R. Sheldrake, The Presence of the Past: Morphic Resonance and the Habits of Nature, Times Books, New York, 1988

4. R. Sheldrake, Dogs That Know When their Owners Are Coming Home, And Other Unexplained Powers of Animals, Part V, Crown, New York, 1999

14. R. Sheldrake, The Sense of Being Stared At, And Other Aspects of the Extended Mind, Crown, New York, 2003.