The Anti-Gravity Mystery of the Coral Castle

“I have discovered the secrets of the pyramids, and have found out how the Egyptians and the ancient builders in Peru, Yucatan, and Asia, with only primitive tools, raised and set in place blocks of stone weighing many tons!” – Edward Leedskalnin

Often equated with the engineering feats of Stonehenge and the Great Pyramid of Egypt, Coral Castle was built by reclusive eccentric Edward Leedskalnin, who single-handledly erected gigantic quarried stones resulting in his enigmatic castle.

Originally located in the tiny town of Florida City in the l920′s, the site was later moved to it’s current location just south of Miami, Florida. Ed is said to have built the Castle for his “sweet 16″ supposedly, a woman from his native Latvia who had promised to marry him and then changed her mind at the last minute.

Sweet Sixteen is actually a sheilded allusion to his discovery–the ability to redirect the forces of gravity using earths’ magnetics, utilizing uncanny knowledge of hyperdimensional physics.

A feast of coral imagery, the site lies behind massive 8′ high coral rock walls on a ten-acre tract, protecting it from the sprawling suburban city of Homestead. The coral walls fit together with amazing accuracy even though they were constructed without cement. These technical accomplishments have astounded engineers and scientists.

A small statured man barely weighing one hundred pounds, Ed quarried one piece of coral from the earth weighing over twenty-eight tons and then erected it himself!

His accomplishments include a rocking chair weighing thousands of pounds that can be rocked with a finger, and an underground structure reached by climbing down a one-piece spiral stone staircase to a subterranean refrigerator. A five thousand pound heart-shaped coral rock table with a red blooming ixora growing from its center, is believed to be the world’s largest valentine according to Ripley’s.

Ed liked to read and would sit in a group of stone chairs which caught the morning, afternoon, and evening light as the sun traveled over the horizon. There’s a table fashioned from solid rock in the image of the State of Florida complete with a water basin at the position of Lake Okeechobee. Ed reckoned the governor could sit here and figure out how to raise taxes.

Much of the site is calibrated to celestial alignments including an ingenious thirty ton telescope towering twenty-five feet above the complex, perfectly aligned to the North Star. A working sundial calibrated to noon of the Winter and Summer Solstice, is so accurate it tells time within two minutes.

Energy sensitive people will often report headaches while standing inside the archway of the nine-ton swinging gate, thought to be erected over a vortex. This was the case when I visited in the early 1990s, dowsing the site during and after a full solar eclipse.

Did Ed place his Castle over a convergence of key “energy leys” in order to harness the electromagnetic signature of the land– an invisible web of energy concentrated at points of telluric power, the convergence of which create unusual phenomena, anti-gravity? 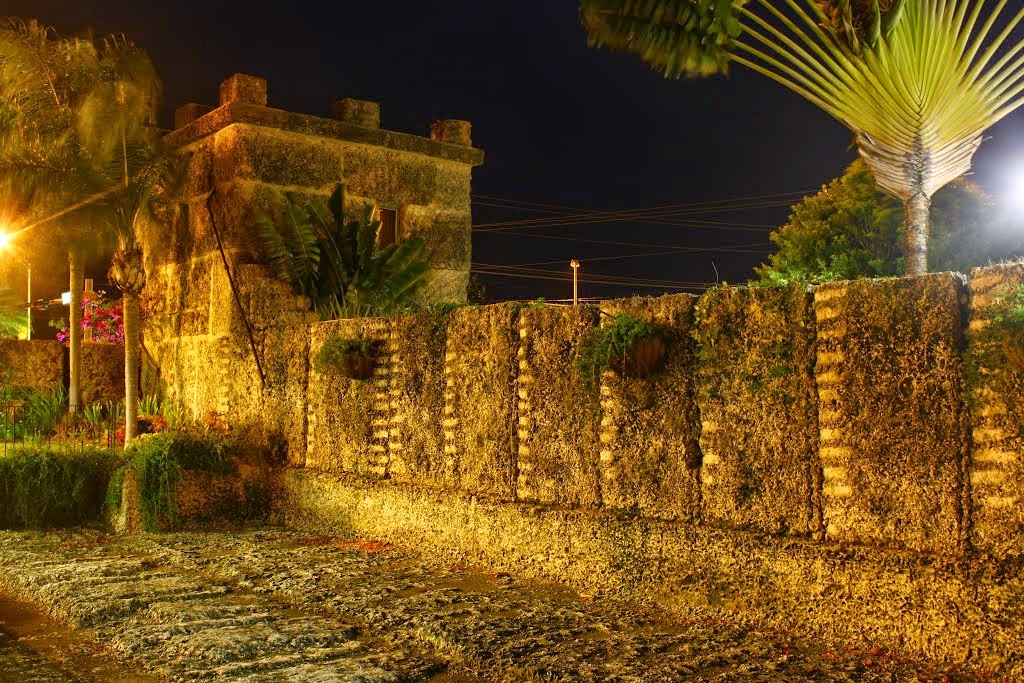 The original site remained in Florida City until the mid l930′s at which time, the story goes, someone planned to build a sub-division nearby. A fanatic for privacy, Ed packed up his entire quarry and moved it to the present location in Homestead. No one ever saw him load or unload the massive tonnage from a friend’s truck he’d enlisted to transport the gigantic stones.

The relocation progressed easily, and the entire complex was re-erected at its new location. In total Ed quarried over eleven hundred tons of coral rock for his Castle using tools fashioned from wrecking-yard junk, never revealing just how he managed to rise and position the massive coral blocks that make up his compound.

An air of mystery surrounded the two story monolith known as the tower, which housed his workshop and living quarters. He was secretive and almost always worked at night; no one ever saw him. 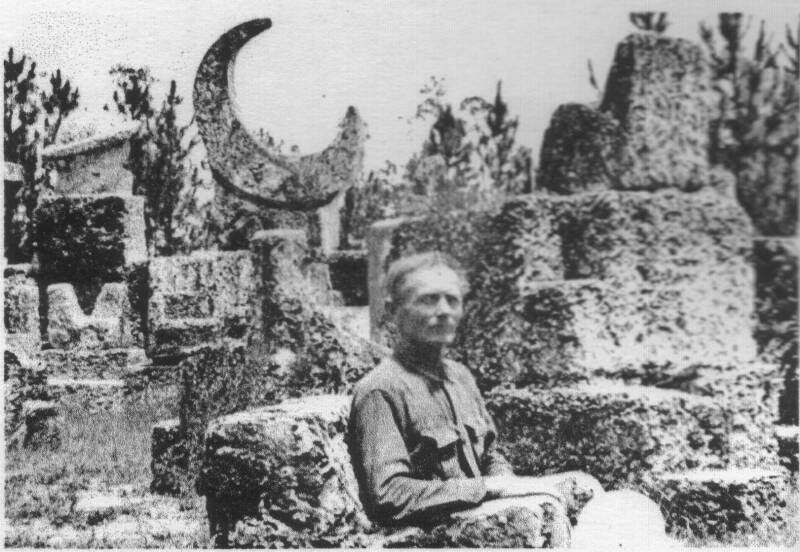 Ed seemed to have a sixth sense with which he could detect when he was being watched, often the hallmark of an intuitive.

Ed stated, “if I concentrate on somebody’s back while that person doesn’t know it, they’re liable to get restless and look around. I’ve noticed, I can chase the mosquitos away with this same, concentrated, look.”

Ed disputed contempory science and believed, “all matter consists of magnets which can produce measurable phenomena, and electricity.” Ed would say he had “re-discovered the laws of weight, measurement, and leverage,” and that these concepts “involved the relationship of the Earth to celestial alignments.”

He claimed to see beads of light which he believed to be the physical presence of nature’s magnetism, and life force, or what we term today Chi.