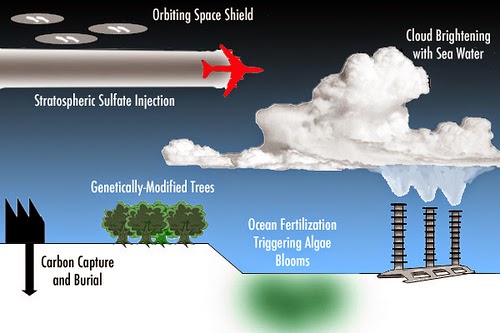 The Hidden Agenda Behind Chemtrails

We, the people, are under attack by a small group of mad scientists, out-of-control government agencies and profit-seeking billionaires pretending to “save the earth” from global warming.

These “global control-freaks” want to manipulate weather patterns – in order to dominate the Earth’s resources. In reality, military programs like HAARP and chemtrails which over-heat the atmosphere and poison the sky (and farmland) seriously threaten all life on this planet. (keep reading -with an open mind)

What if global warming was just a hoax or worse? Are these toxic substances in chemtrails, GMO’s and jjabs being (deliberately) created to reduce the world population? 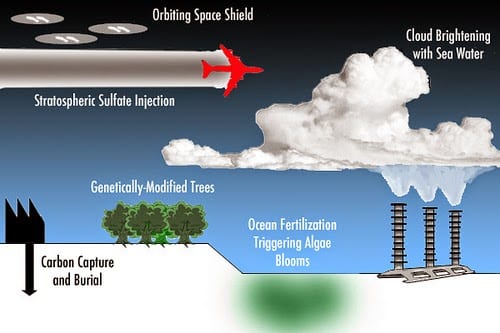 According to many geo-scientists, the chemtrail program consists of spraying 10 to 20 million tons of aluminum oxide, barium, and other chemicals including arsenic, cadmium, and lead into the atmosphere to cool down the planet.

This program, also known as “Project Cloverleaf”, is one of the most secretive programs within the airline industry of the United States. But, many of the pilots don’t even know what (or why) they are actually spraying!

Naturally, the question you have to ask is: why are they doing this to us?

Simply put, weather control (through chemtrail spraying) can be used as a weapon against any country or government by creating drought and famine.

Obviously, this would destroy the ability of a nation to grow food and remain independent. Once a country is desperate for food, it allows other governments to impose their rule and authority in exchange for rain or other resources.

In October 2011, scientists from around the world gathered in Orlando, Florida for the American Association for Aerosol Research conference. Most importantly, there was a lecture called: “Aerosols, Clouds and Precipitation”.

These (crazy) scientists discussed how different aerosols (toxic materials)could create cloud cover to reflect sunlight away from the earth and increase (or decrease) rain fall in certain regions of the world.

Who benefits from weather modification and weather control programs?

Consider this: Since 1997, weather has been traded as a commodity at the Chicago Mercantile Exchange. Many experts agree, this is exactly when geo-engineering programs rose in popularity.

Since commodities are directly affected by the weather – predicting these trends could be very profitable to those individuals who have the ability to control or manipulate our weather.

Evidence That a 'Civilisation X' Once Thrived on Earth Previous post
Amazing Uses for Something We Usually Throw Away: Orange and Banana Peels Next post