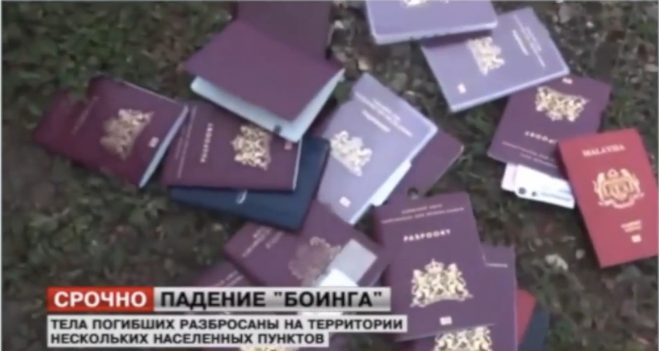 The MH17 Smoking Gun: Invalid and Pristine Passports at the Crash Site

As the dust settles on this latest air tragedy, a number of very visible anomalies exist, all of which have been willingly glossed over by western media analysts and government officials.

Putting the current media storm into context, it’s essential to establish the political motives of those parties rushing to assign blame.

Western government and major western media outlets, namely in the US and Great Britain, have been keen to politicize the incident and pin the blame for this tragedy either directly, or indirectly on Russia.

21st Century Wire’s first report on MH17 provided details revealing western media omissions, as well as our analysis of why the west’s story doesn’t add up. 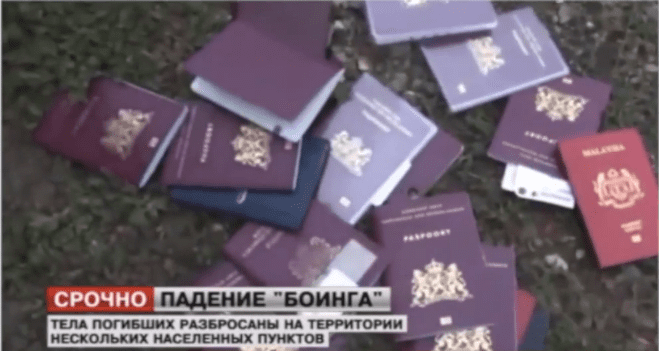 On July 17th, Flight MH17, a Boeing 777 Malaysian Airlines passenger jet traveling from Amsterdam, Netherlands to to Kuala Lumpur, Malaysia, crashed near the settlement of Grabovo, in Eastern Ukraine’s Donetsk region, with the 298 persons on board.

Authorities claim that the flight ‘disappeared’ from radar prior to crashing, and western media, along with the western-backed government in Kiev, claimed from the onset that the airliner was shot down by by ‘pro-Russian separatists’ with a Russian-made ‘BUK’ surface-to-air missile (SAM) system, although no evidence, other than anecdotal, exists the back Washington’s official conspiracy theory.

Questions About the Passports

It’s worth pointing out some interesting anomalies surrounding the incident, the first images broadcast over US and European broadcast networks, including reports our research team viewed from ABC and CNN, included shot of dozens of Passports being handled, presumably near the crash site, by an unknown man in front of a camera.

Were these passports gathered from hundreds of charred, individual bodies, or was it something else?

Observers may consider this as one smoking gun, albeit – without the smoke, or even a scratch. Oddly, all the Passports appear in mint condition, including many contained in perfectly preserved plastic protectors – no damage, no scratches, none are deformed in any way.

The first problem with this is that, clearly, a number of these Passports have been ‘hole-punched’ in the upper left-hand corner, and ‘clipped’ (triangular cut-out from right-hand center front cover) indicating that they are either expired, and are invalid for travel – making it impossible that any of these decommissioned passports could be used to travel internationally at the flight’s port of Departure in Amsterdam.


The clip which ran across all US and western media outlets was only a partial clip, however, showing the passports to viewers in order to establish the human connection to the crash site.

The full clip, which did not make it to US and world audiences show this pile of pristine passports being taken out of the rear trunk (or boot) of this man’s motor vehicle, suggesting that these items may have been planted at the scene, or used to fulfill a media image required to craft the early stages of this story.


It is very unlikely, and most probably impossible that all these passports were collected within hours – from each individual charred, dismembered or otherwise injured victim said to have died from this airline crash, and moreover, it’s impossible that all of those passports would be in mint condition, without a scratch, or bent, and everyone without burn marks etc.

One could conclude here, that these Passports shown here across global media, especially the invalid/expired passports, could not have been used to travel by all the perished victims on Flight MH17.

Yet, the man going through this pile presents to the camera – the names on specific passports, and amazingly, these names do in fact match the names on Flight MH17′s manifest released to the public. The names shown by the passport man out of the truck are as follows:

In a separate clip, these names are shown:


Here is the master list of passengers released to the public 36 hours ago: 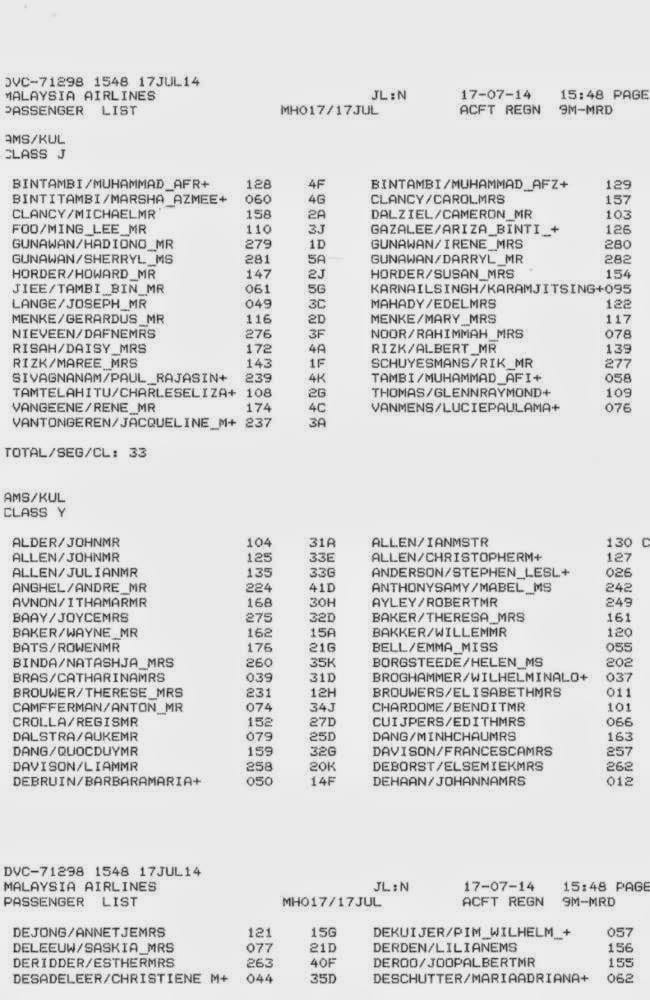 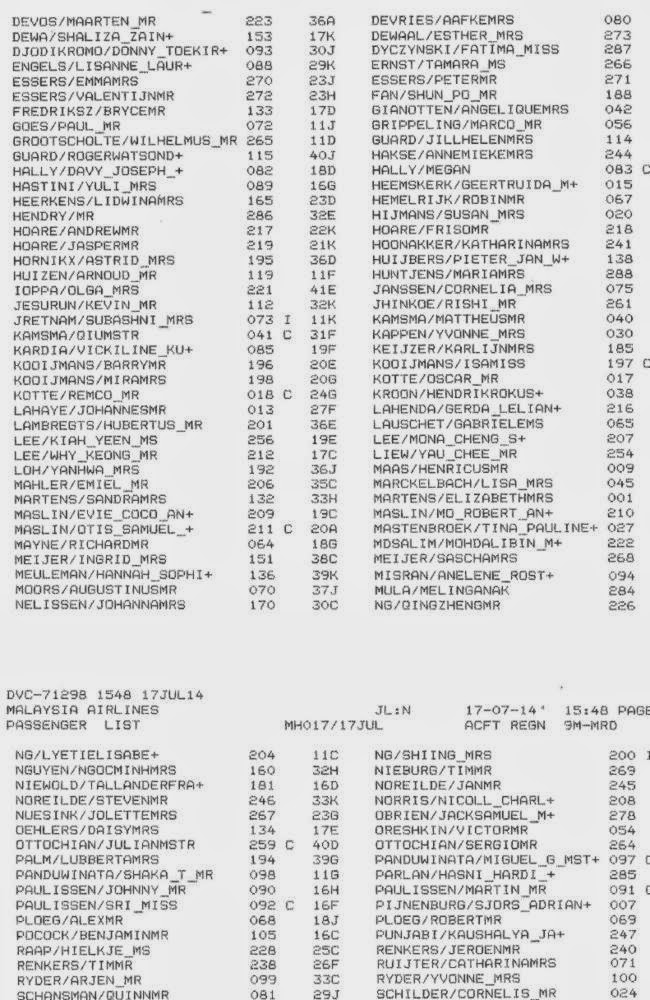 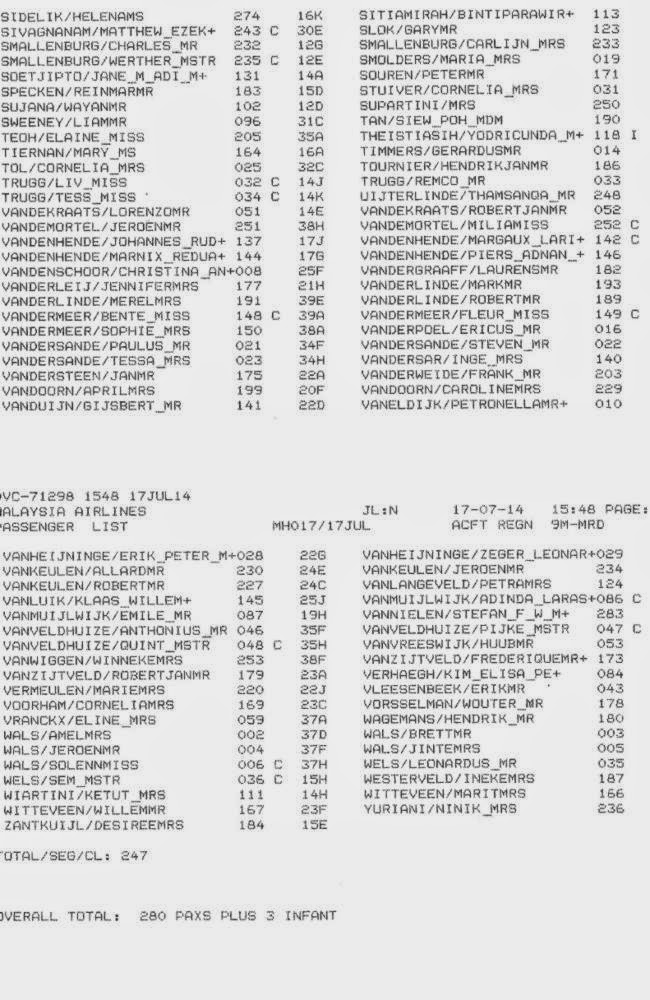 It would be inappropriate at this point in time to draw any conclusions, or speculate whether or not anything untoward has taken place here, and we are only stating the facts, and obvious observations. Readers and researchers can draw their own conclusions as to where these exhibits may lead.

Number and Nationalities of Victims:

Malaysia Airlines has released a new list of the nationalities of 295 passengers who were on board MH17, though it lists 27 Australian names, but according to Foreign Minister Julie Bishop is 28, including a dual-citizen:

*As of Saturday, four passengers’ nationalities – including the one ‘American’ later announced Saturday afternoon named as Quinn Lucas Schansman, had not yet been verified as of the weekend.

Malaysia Airlines are said to have released this list of only 283 names to FOX News yesterday, show here.

President Obama announced Friday that there was at least one American citizen on MH17, Quinn Lucas Schansman, only there are no Americans listed on the Flight manifest provided by Malaysian Airlines, although Washington says that Schansman is a Dutch-US ‘dual citizen’.

One of the main talking points being repeated by Washington and the US media claims that, “pro-Russian rebels’ are denying access to the MH17 crash site” in Grabovo.

Conversely, officials in Kiev claim to have dispatched some 200 ‘emergency workers’ to the crash site on July 17th, with the simultaneous claim that some 800-900 ‘pro-Russian militants’ are guarding the crash site.

When asked on air Saturday morning, CNN International correspondent Mark Stevens remarked that his team had seen neither the 200 emergency workers, nor 800 militants, as was announced by Kiev.

Just as CNN reported this segment, the news ticker below the moving image stated, ‘OSCE officials are now worried that bodies are beginning to decompose’, even though real decomposition normally begins after 72 hours. This talking point was pushed very hard by US media outlets.

The insistence of western media to push the ‘decomposition’ issue becomes even more interesting when coupled with a report taken hours after the crash and published via AP, where rebel spokesperson Igor Girkin stated that “a significant number of the bodies weren’t fresh,” adding that, “they were drained of blood and reeked of decomposition”.

Add to this, the problems surrounding the passports outlined above, and we can certainly see a narrative being constructed designed to connect this list of victims with a SAM missile attack at the said location – which has also been joined to the talking that Russia (and Vladimir Putin) are now responsible for denying investigators access to the crash site, despite the fact that Ukrainian investigators have been at the site since Friday.

At 1pm EST President Obama made an official speech deriding Russia and eastern Ukrainian rebels allegedly ‘under Moscow’s’ control’ for denying access to the crash site.

To further delay the situation (and enable decomposition), at the very same moment as Obama’s speech, it was announced that violence erupted between the Ukrainian Army and Rebels near MH17 crash site – just as international investigators were due to arrive.

Japanese Doctor Warns: 'Tokyo Should no Longer be Inhabited' Previous post
11 Traits of Indigo Children - Are You One? Next post