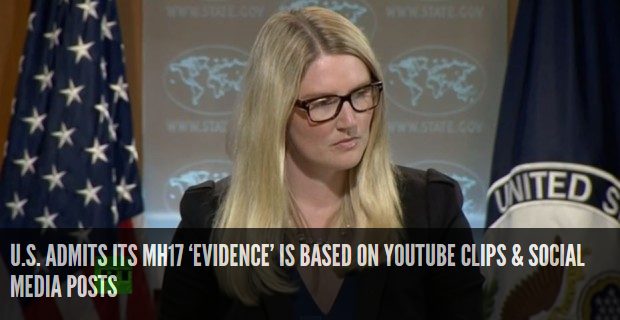 In a testy exchange between AP reporter Matt Lee and U.S. State Department Deputy Spokesperson Marie Harf, Lee virtually corners Harf into admitting that the “evidence” presented by the U.S. to blame Russian-backed rebels for the shoot down of Malaysia Airlines Flight 17 amounts to nothing more than YouTube videos and social media posts.

Lee begins by asking Harf how the U.S. plans to produce “forensic evidence” proving Russian-backed rebels were behind the attack, to which Hard responds by reeling off talking points before stating, “we know, we saw in social media afterwards….of the pro-Russian separatists bragging about shooting down an aircraft.”

“How is it exactly that you know it was fired from separatist held territory?” asks Lee, to which Harf responds that the evidence is based on “communications posted on YouTube by the Ukrainian government.” 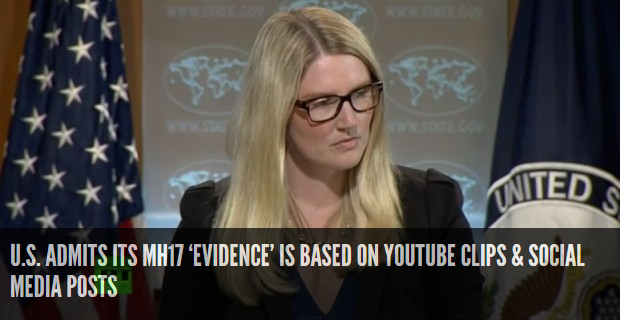 “Is there anything other… than social media?” asks Lee. Harf alludes to an “assessment,” before again reeling off talking points (based on social media and YouTube videos) that blame separatist rebels.

“I haven’t seen your evidence that shows that the missile was launched from rebel held territory,” continues Lee. “The only thing you’re willing to put out publicly is the social media accounts,” he adds, before citing other social media accounts that dispute the State Department’s version of events.

“The Russians have said we’ve put out our radar images which show this Ukrainian plane near at least….why don’t you put out your…,” states Lee before again being interrupted by Harf.

Credit must be given to Matt Lee for doing his job and challenging Harf given that any questioning of the official narrative behind the MH17 shoot down, backed up as it is by the flimsiest of “evidence,” has been demonized as “Russian propaganda,” just as skepticism towards last year’s chemical weapons attack in Syria, which an MIT study later concluded was likely not launched by government forces, was derided as “Assad propaganda.”

Despite the State Department’s insistence that YouTube clips and social media posts can be considered as hard evidence, even the veracity of that material has attracted intense skepticism.

Harf’s mention of social media posts which show rebels “bragging” about bringing down the airliner is likely a reference to a post on the Russian version of Facebook shortly after MH17 was shot down by Ukrainian rebel commander Igor Strelkov. However, as Max Fisher documents, “There are real reasons to doubt that the message was genuine.”

First of all Strelkov’s page “is a fake made by fans,” according to rebels who spoke to Buzzfeed’s Max Seddon, so the words cannot even be attributed to the commander. In addition, the post makes reference to the shoot down not of a civilian airliner but to an Antonov AN-26 military transport plane.

“This casts a bit further doubt on the idea that people fired on the airplane and then posted on VK about it; if someone fired on the plane they likely would have noticed it was a large jet and not a small-ish prop plane,” writes Fisher.

Video of a Buk missile launcher apparently crossing the border back to Russia after the plane was shot down which was cited by Kiev and Washington has also since been debunked. The clip is actually shot in the Ukrainian of town of Krasnoarmeisk, which has been controlled by Kiev since May.

According to audio experts who conducted a forensic analysis, a YouTube video of a conversation between a separatist leader and a Russian military commander which purported to show rebels accepting responsibility for shooting down the airliner is in fact a fabrication.

While Russia has presented actual radar and satellite evidence to back up its contention that Ukrainian fighter jets were following the doomed airliner shortly before the incident, the sum of Kiev and Washington’s proof that separatists were to blame for the shoot down amounts to little more than highly questionable YouTube videos and social media posts.

Kiev has also failed to release air traffic control recordings, which were seized immediately by Ukrainian security forces, which could offer a crucial insight into what was happening in the skies immediately prior to the aircraft being shot down.

While any questioning of the narrative behind the incident has been dismissed by the establishment media as “Russian propaganda,” Russia is the only party to have actually presented anything which could be considered real evidence, whereas Washington and Kiev are still reliant on the sort of proof that would only satisfy the sloppiest of Internet conspiracy theorists.

Related: Cold War 2 Has Begun: The US and NATO are Deliberately Provoking Russia, Hoping for WW3;

Google+ user Vaudeviller pointed out the absurdity of the U.S. State Department’s so called “evidence,” which is nothing more than a YT video in which some individuals who present themselves as pro-Russian separatists (a little too convenient, isn’t it?) are bragging about the event:

“Hi, I’m a Russian-backed separatist and I did 9/11. I’m also responsible for Pearl Harbor and I killed John F. Kennedy. Here it is, on the internet, I’m bragging about it, feel free to quote me in your next State Dept. press briefing and deploy the 82nd Airborne to my apartment.”

It's Not Just the Bees That Are Dying! Popular Pesticides Linked to Bird Declines Previous post
Japanese Doctor Warns: 'Tokyo Should no Longer be Inhabited' Next post