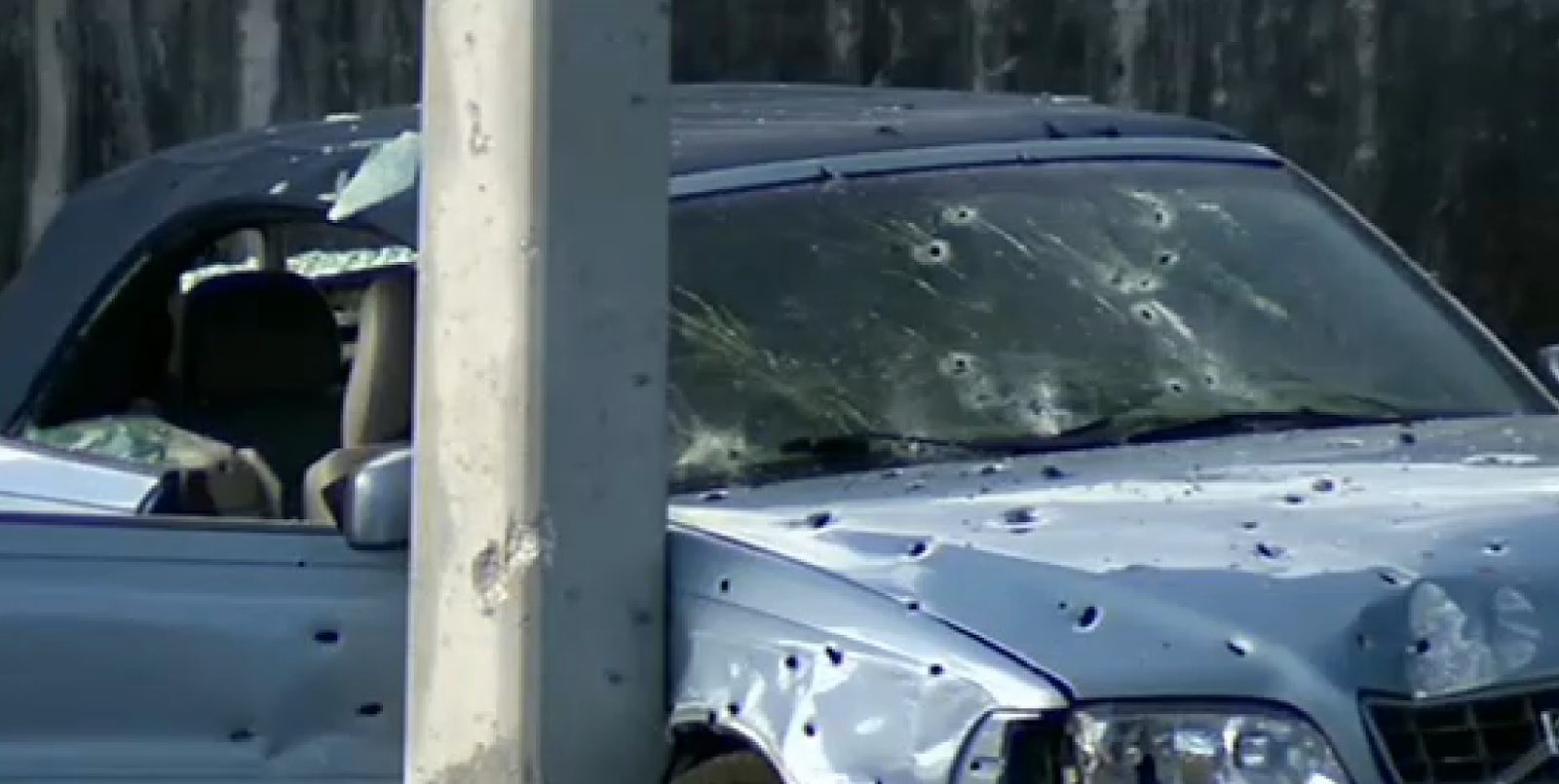 US Cops Use More Bullets Per Man, Than German Cops Per Year

Eighty-five shots: That’s the total number of bullets German police used in all of 2011, Der Spiegel reports. But what does it say when US cops use as much ammo to bring down one man as German cops need to keep the peace nationwide?

The rate at which German police discharged their firearms is further underscored by how rarely they shot with fatal intent. Of the 85 bullets used in 2011, 49 were warnings shots, [and only] 36 were aimed at criminal suspects, 15 people were injured, and 6 were killed, the German daily continues.

And when comparing Germany with the United States, another story altogether appears. Although police in the United States have to file a report every time they use their firearm in the line of duty, either through sheer volume or disinterest, no statistics are readily available on the amount of ammunition used annually. 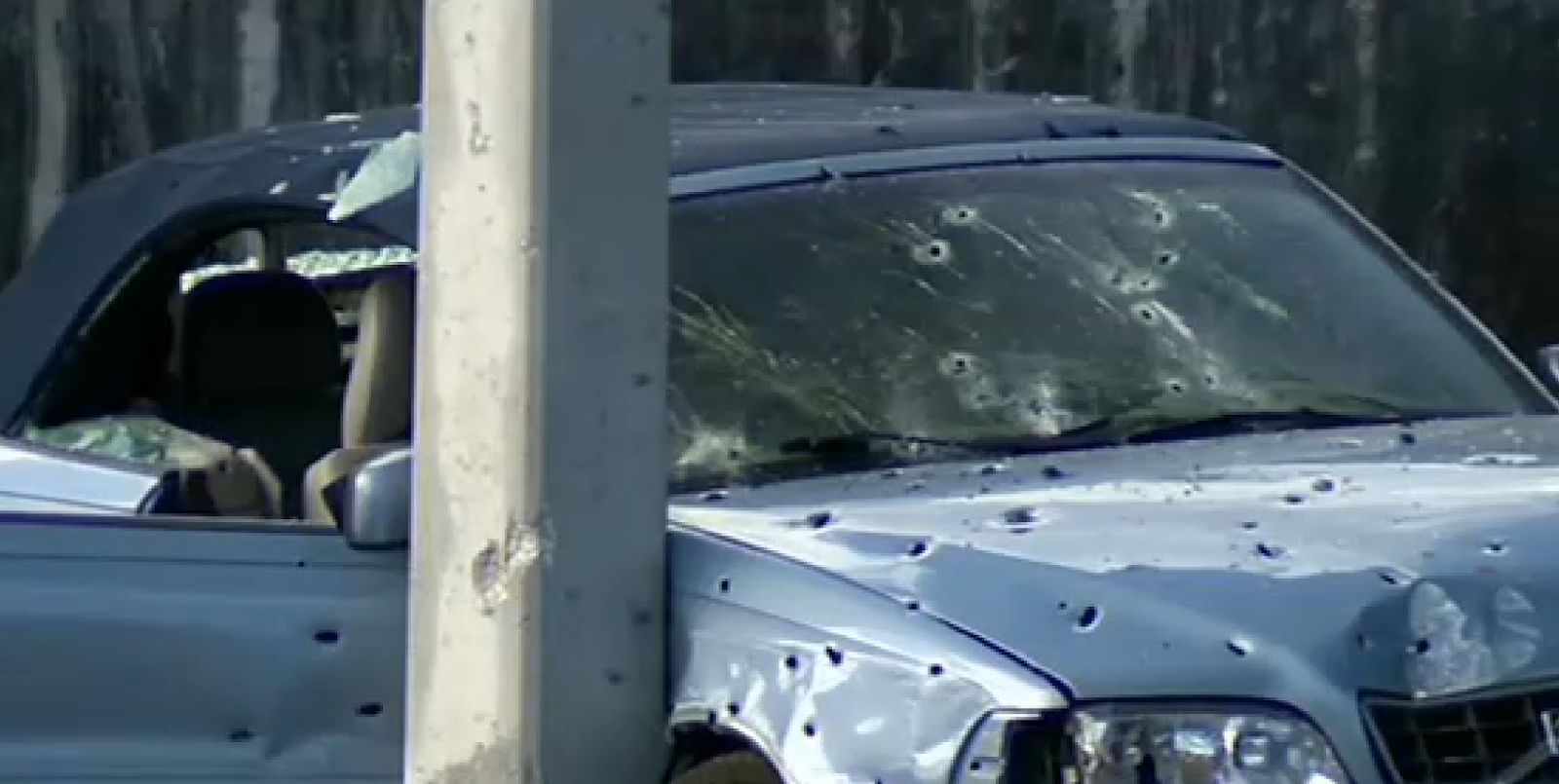 377 rounds rounds had been fired at this car, leaving both occupants dead. Bullets also hit neighboring cars and buildings. – Ref.

But though the number of shell casings spent by the boys in blue has not been tallied, there are other indicators that something is amiss when it comes to state-sponsored violence in the US. The US population is almost four times that of Germany’s, yet its level of police violence is exponentially higher.

The trigger-happy nature of US cops was perhaps best epitomized in the controversial 2001 Bruce Springsteen song “American Skin (41 Shots).” The song recounts the 1999 shooting death of an unarmed 23-year-old Guinean immigrant in New York City.

The victim, Amadou Diallo, as the song title alludes, was shot 41 times by four plain-clothed police officers outside of his apartment. And Diallo’s case is anything but anomalous in today’s America.

Last month, Los Angeles Police killed a 19-year-old man after unloading over 90 shots on him following a high-speed chase down an area freeway. The same month, New York police fired at a suspected murderer 84 times. While the man was wounded, “the punk incredibly survived,” the New York Post reports.

In 2011, Miami police unloaded their magazines on a reckless Memorial Day driver who had hit several other vehicles. Over 100 rounds later, the driver was killed and seven innocent bystanders were injured in the shooting.

Another excessive case occurred in 2006, when a ten-member Florida SWAT team mowed down cop-killer Angilo Freeland in a hail of bullets – 110, to be exact. Polk Country Sheriff Grady Judd nonchalantly told the Orlando Sentinel, “That’s all the bullets we had.”

In another 2006 six case, plain clothes and undercover New York police shot at Sean Bell more than 50 times a day before his wedding. Bell was killed, and three of his friends were critically injured. The case was widely compared to that of Diallo.

The phenomenon is so common in America that the term ‘contagious shooting’ – the idea that cops reflexively open fire because others are doing so – has entered the national vocabulary.

Perhaps one incident that spurred experts to coin the term was a 1995 Bronx robbery where officers fired an incredible 125 shots at a suspect who did not even fire back.

“They were shooting to the echo of their own gunfire,” a former police official told The New York Times.

One officer told the daily in 2006 that “the only reason to be shooting in New York City is that you or someone else is going to be killed and it’s going to be imminent,” and thus you fire as many shots as necessary to “extinguish the threat.”

Ironically, one officer even said “until we have some substitute for a firearm, there will always be a situation where more rounds are fired than in other situations.”

However, even when tasers presented a non-lethal alternative, the bodies kept piling up.  Between 2001 and early 2012, Amnesty International estimated that law enforcement killed 500 people with the device.

­While statistics concerning the total number of cop-inflicted deaths over the last several years are unavailable, a November 2011 US Department of Justice report entitled ‘Arrest Related Deaths , 2003-2009’ says “a total of 4,813 [arrest-related] deaths were reported to the Bureau of Justice Statistics.”

The report further says that “about 6 in 10 deaths (2,931) were classified as homicide by law enforcement personnel, and 4 in 10 (1,882) were attributed to other manners of death.”

But then, the United States is a violent place. In 2009 alone, the US Center For Disease Control and Prevention says 16,799 people were murdered, with 11,493 of those deaths inflicted by a firearm. A further 1.8 million assault-related emergency room visits were reported in the same year.

However, despite those figures, violent crime has significantly dropped over the last 20 years, with murder and robbery rates halving from 1991-98.

But while citizens commit fewer crimes annually, US law enforcement have become increasingly militarized in the post-9/11 world. In fact, instances of excessive force or “other tactics to violate victims civil rights” increased by 25 per cent from 2001 to 2007, USA Today reported.

With nearly three million US citizens behind bars, cop-related violence on the rise, contagious shooting sprees ever-present and non-lethal weapons being used to deadly effect, 85 is a number that should send shockwaves through the land of the free.


Reference: RT News;
Australian Judge: Incest & Pedophilia ‘May be Accepted’ by Society — WHAT? Previous post
The US Govt. Spent Enough Money On a Broken Plane to Buy Every Homeless Person a $664,000 Mansion Next post