Who Were the Real ‘Gods of Eden’?

The Biblical tale of Adam and Eve in the Garden of Eden is based on actual events which happened nearly 200,000 years ago. A comparison of ancient texts with the latest breakthroughs in genetic science reveals amazingly consistent details, which enable us to finally solve the mystery of mankind’s origins.

The shocking conclusion is that man was a genetic hybrid, created and manipulated not by God, but by flesh-and-blood, walking, talking ‘gods’.

[Sumerian depiction of Anunnaki ‘gods’ manipulating mankind’s DNA (via the Tree of Life), while being overseen by ANU (literally translating as ‘the Sky Father’)]

A religious belief in One God has dominated the thinking of western society for more than a thousand years, leading to considerable difficulties with the concept of flesh-and-blood ‘gods’.

However, such an idea did not present any problems to the world’s first known civilisation – the Sumerians – who lived alongside these divine rulers and depicted them as human-like beings.

The Sumerian scribes and their Akkadian successors inscribed clay tablets with a wealth of information about the gods. One such text, commonly known by the name of its hero, Atra-Hasis, describes the background to the creation of man, when the gods themselves were involved in the painstaking extraction of minerals from Earth:

“When the gods, as men, bore the work and suffered the toil – the toil of the gods was great, the work was heavy, the distress was much.”

Conditions were so severe that, after 40 periods of hardship, the gods rebelled against their leader Enlil. A council of the gods was then called, at which the god Ea (alias Enki) provided the solution:

“While the Birth Goddess is present, let her create a Primitive Worker, let him bear the yoke, let him carry the toil of the gods!”

The ensuing passages of the Atra-Hasis describe what appears to a modern-day reader as a cloning process, in which the goddess Nin-ti (‘Lady Life’) made fourteen pieces of ‘clay’ and impregnated fourteen ‘birth goddesses’.

The first slaves comprised seven males and seven females, referred to as LU.LU – a term indicating a genetic mixture between the primitive hominid Homo erectus and the gods themselves. The event can be dated to around 200,000 years ago when the large-brained Homo sapiens suddenly appeared on this planet.

The Meaning of Eden

The Biblical Garden of Eden is not a mythological place but a real location. In order to understand what happened there, it is necessary to appreciate that the word Eden is derived from the Sumerian term E.DIN.

Whilst the first syllable ‘E’ meant ‘Home’, the second syllable was an abbreviation of DIN.GIR, commonly translated as ‘the gods’. Eden or E.DIN was therefore the ‘Abode of the Gods’.

Ancient texts describe more than one abode of the gods, with the Earth being divided geographically between two rival groups, headed by the brothers Enlil and Enki respectively.

Whilst the Enkiites inhabited the African continent, the Enlilites occupied Asia and particularly the fertile lands of Mesopotamia. We are thus dealing with both a western Eden and an eastern Eden.

It was in the western Eden, also known as the Abzu or Lower World, that Enki and Ninti created the LU.LU slave, a detail which is confirmed by finds of the oldest Homo sapiens fossils in Africa. It was in these mineral-rich lands that man was put to work in the dangerous process of extracting minerals from deep underground.

A text known as The Myth of the Pickaxe explains what happened next. In the eastern Eden, Enki’s brother and rival, Enlil, was besieged by his underlings, who complained that the slaves were being unfairly monopolised in the Lower World. Enlil, described in the following text as ‘the Lord’, reacted accordingly:

“The Lord called forth the AL.ANI, gave its orders. He set the earth splitter as a crown upon its head, and drove it into the Place-Where-Flesh-Sprouted-Forth. In the hole was a head of a man; from the ground, people were breaking through towards Enlil. He eyed the Black-headed Ones in steadfast fashion.”

This raid on the Black-headed slaves is also mentioned briefly in the Old Testament, Genesis 2:7-8, where man rather curiously had already been formed when he was ‘put’ in the Garden of Eden by ‘God’.

The Book of Genesis tale of Adam and Eve is nowadays regarded as a symbolic myth, but several clues suggest that it drew upon an earlier account of a real event. The first clue is that God himself is described as one of the walking talking gods.

The second clue is the presence of the Serpent – a well-known symbol for the ancient Egyptian gods, and particularly Enki himself, the genetic scientist who had created man. It is no coincidence that the modern symbol of medicine is a serpent entwined around a staff [i.e. the caduceus].

[Sumerian depiction of the caduceus, from where it actually originated. Notice the two winged reptilians flanking the caduceus. Probable interpretation of the symbol: The joint effort of The Serpent God Enki and Serpent Goddess Ninmah to genetically engineer mankind.]

The third clue lies in the outcome of the Serpent’s intervention. Adam and Eve’s embarrassment at being naked, along with Biblical references to the acquisition of ‘knowledge’, clearly suggest that they were the first human pair to become sexually aware.

The Old Testament suggests that this change was caused by the consumption of a ‘fruit’. This is a significant detail because, according to the scenario outlined so far, man was created by the gods as a hybrid creature, and hybrids are nearly always born sterile. The tale of sexual knowledge being granted in the Garden of Eden therefore carries a distinct ring of truth.

How exactly did a ‘fruit’ bestow sexual knowledge on Adam and Eve? As mentioned earlier, the Serpent god was Enki, the genetic scientist of the gods, and the ‘fruit’ with which he tempted Eve would thus seem to symbolise a deliberate genetic intervention by him. 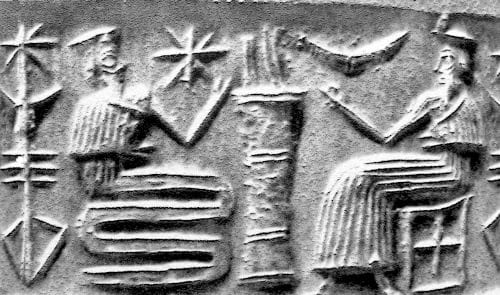 However, in order to confirm our suspicions, we must first address the questions of motive and opportunity, and we must produce a solid scientific hypothesis on how such a genetic change could have been introduced.

The background provided so far provides all but one of the clues we need to reconstruct the event. The missing piece which solves the puzzle is the mysterious ‘Tree of Life’ in the Garden of Eden.

The Tree of Life

According to the Book of Genesis, Adam and Eve were free to eat from a ‘Tree of Life’ up until the moment they became sexually aware. Only then did the Lord God say:

“The man has now become like one of us, knowing good and evil. He must not be allowed to reach out his hand and take also from the tree of life and eat, and live forever.”

Why the sudden change of mind? Why was it that this god, identified earlier as Enlil, originally wanted man to eat the fruit and live forever, but then decided to withdraw it from Adam and Eve? Why did it suddenly become necessary for him to expel them and safeguard the Tree of Life with a ‘flaming sword’?

The answer is amazingly simple. Originally, mankind was designed as a slave workforce which could be easily controlled, and his sterility was an essential control mechanism.

However, with the granting of sexual knowledge to Adam and Eve, man acquired the means to independent reproduction. The longevity offered by the Tree of Life thus changed from an asset to a liability, creating a serious risk of an out-of-control population explosion.

Is it really possible that consumption of a ‘fruit’ could have delayed Adam and Eve’s ageing process? Genetic scientists have recently discovered that ageing is caused by genetic mutations, and that one of the prime causes of these errors is excess oxygen in the cells.

This oxygen, known as ‘free radicals’ causes damage to our cells in the same way that it causes cars to rust and butter to go rancid. 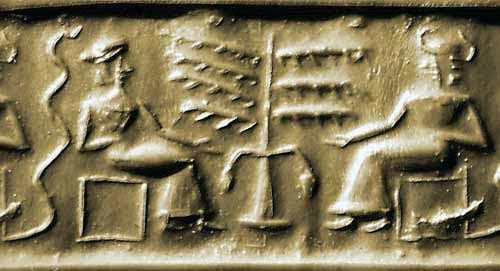 [Sumerian depiction of Adam, Eve, the Serpent (Enki) and the Tree of Life]

Scientists are now investigating the possibility of using a cocktail of drugs to form a protective barrier around the cells, and so extend the human life span. Such a drug could well lie behind the symbolism of the legendary fruit of the Tree of Life.

Anti-ageing drugs, however, were only one method used by the ancient gods to maximise their life spans.

As explained in my book, Gods of the New Millennium, the primary factor behind the alleged immortality of the gods was almost certainly a genetic inheritance, as evidenced by the male gods’ obsession with marrying their half-sisters. Such a genetic longevity is indeed being sought in the laboratory today.

Scientists at the Geron Corporation in America are confident that they can prolong the life of human cells by manipulating the telomeres on the end of the chromosomes. Furthermore, a genome which was artificially enhanced in this way would make perfect sense for a species which was attempting to overcome the time barriers to inter-stellar travel.

According to the Old Testament, Adam lived for 930 years, but this amazing life span pales into insignificance compared to the reigns of thousands of years recorded in the Sumerian Kings Lists.

These periods once seemed incredible, but are now scientifically plausible, based on the assumption that man was indeed created in the gods’ image, genetically-speaking.

Let us now return to the crucial question of how and why the god Enki genetically reprogrammed the human race. Enki’s motive presents us with no problem, other than denting our proud human heritage, for it would seem that his gift of sexual knowledge was simply a spiteful trick on his brother Enlil.

Following the raid on the slave camps, mentioned earlier, we can safely surmise that Enki was more than a little upset with his brother, and was awaiting a suitable opportunity for revenge.

How was it that Enki, the Serpent god, turned up in the Garden of Eden? The plausible answer is that Enlil’s raid into Africa captured an insufficient number of male workers.

Without the cloning technology and the females that were created to act as surrogate mothers, Enlil was powerless to expand his newly acquired labour force. It was thus inevitable that he would have to seek Enki’s help in setting up a fully independent medical centre.

What happened next? The most likely scenario is that Enki brought two female LU.LUs to the eastern Eden and offered to demonstrate the necessary procedures by carrying out the first cloning operations.

Let us assume that one male and one female embryo were implanted into the two females with Enlil blissfully unaware that these embryos had been genetically altered by Enki.

The birth of Adam and Eve would thus have appeared perfectly normal, and they would have happily spent their childhood days playing in ‘the Garden’ (or more likely a secure wing of the hospital facility).

Then one day, the sex genes kicked in (as they do) and the two pubescent children suddenly realised that they were naked. When Enlil saw them hiding with embarrassment, he immediately realised the genetic trick which had been played on him, and the rest is history – the serpent was cursed and the blameless Adam and Eve were expelled.

Modern genetic science has revolutionised our understanding of the Book of Genesis and other ancient texts. The alleged intervention by so-called gods is now supported by a scientifically plausible scenario, which involves two different Edens and two separate genetic creations.

It is hardly surprising that the editors of the Bible were extremely confused, and their confusion has handed the Darwinists a walkover victory in the debate on mankind’s origins.