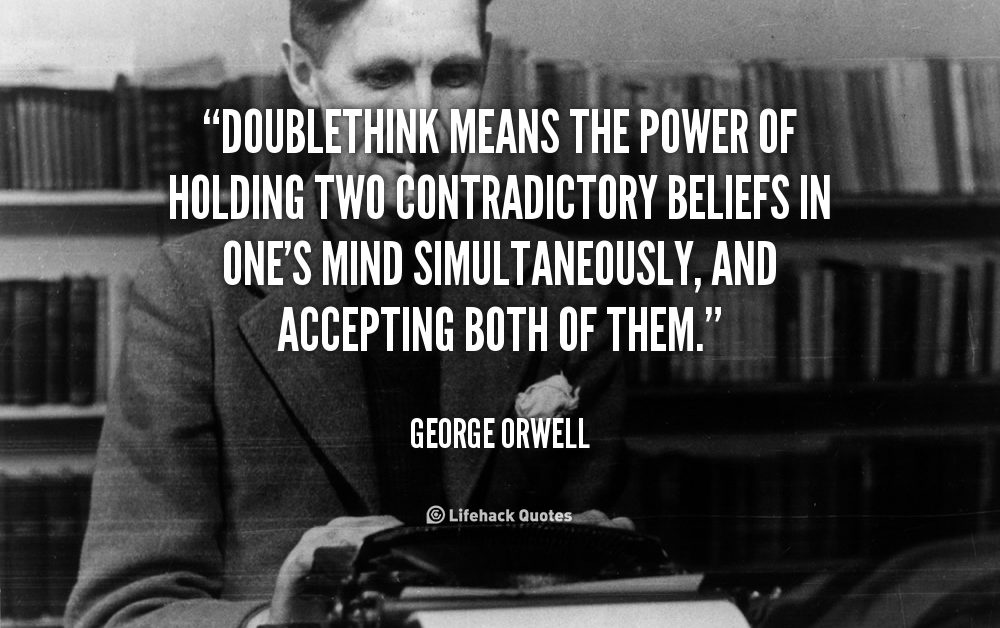 Censorship and Orwellian “Double Think”: Official Discourse in the US

An infirmity once characterizing the past century’s most severe totalitarian regimes has now taken root in Western public discourse and practice, a process akin to Orwellian “double think” acting as a form of de facto censorship preempting consideration of major issues and events.

This mindset is obliquely shared by a majority of professional journalists, academics, and public office holders — in short, those who represent and lead public opinion.

Their collective publicity of the unsaid preserves and perpetuates existing belief systems and power relations. To be sure, there are self-evident injunctions for those straying from such unspoken protocols, including expulsion from this professional class. 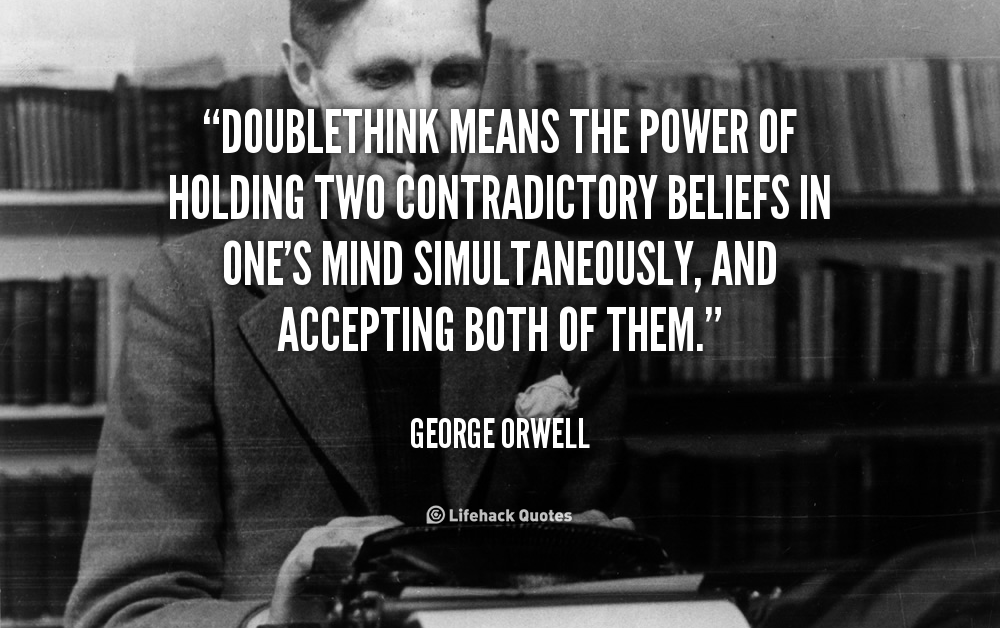 Once a state-endorsed narrative of a questionable event has been presented to and conveyed by the mainstream news media, it is almost invariably accepted without question by “Inner Party” members. Such silence is abetted by a mechanical allegiance to prevailing authority figures and institutional power.

In possessing such a worldview one reflexively forfeits personal integrity to uphold the collective publicity of the unspeakable and an overarching faith in the given sociopolitical system’s artificial spontaneity.

Alternative interpretations of such events by the laity can be dismissed out-of-hand as “conspiracy theories,” thereby further confirming the Party’s creed.

The publicity of the unspeakable ensures that, under penalty of de facto or formal censure, deference to official narratives will increasingly eclipse free inquiry and expression in the West.

The notion that one’s country is becoming a ruthless police state becomes clichéd, particularly with a lack of historical context.

Related: The Meaning of: “War is Peace, Freedom is Slavery, Ignorance is Strength”;

Extreme totalitarian regimes based on, for example, Marxist fundamentalism and unquestioning loyalty to the Party famously utilized internment and compulsory psychiatry to quell political dissidents and unorthodox speech.

Yet in the US and elsewhere, objectively assessing the facts surrounding events such as the key political assassinations of the 1960s, the Oklahoma City Murrah Federal Building bombing, 9/11, or more recent mass-mediated terror events, is tantamount to political heresy and potential justification for state surveillance, interrogation, obligatory “medical” (psychiatric) treatment, and even a sort of asset confiscation in the form of reputational damage and job loss.

Such informal measures were brought against New Hampshire State Representative Stella Tremblay, who was compelled to resign from public office after she questioned the causes of the Boston Marathon bombing,[1] and similarly played out when this author questioned the official storyline of the Newtown Connecticut shooting in early 2013.[2]

The most recent example is New York state school teacher Adam Heller. Following the suspicious disclosure of his private instant messaging communications to another party where he raised questions regarding the Sandy Hook massacre and other dubious events vis-à-vis the legal purchase of two long guns, Heller was forced by local law enforcement, acting under probable direction of the FBI, to endure a 12-day inpatient psychiatric evaluation.

Then, upon the conclusions of another assessment by a “forensic psychiatrist,” Mr. Heller was terminated from his tenured teaching position.

The school teacher’s experience is an especially dangerous precedent; one in which the state, with the aid of psychiatry, has imposed forced institutionalization and severe monetary punishment for “thought crimes” in a fashion commonplace to Soviet Russia and similar police states.

“An individual in our country has basic civil rights, and [Heller’s] were fundamentally violated,” the former school teacher’s attorney, Michael Sussman observes. After being visited by the local police, Heller proceeded to the hospital and “thinks he’s getting some sort of physical checkup,” Mr. Sussman continues.

After the checkup, hospital personnel direct Heller to the facility’s mental health unit. “For what purpose?” Heller responds.

Sussman maintains that Heller is neither confused nor sick.

This is Siberia in the United States! They keep him in the mental health unit for twelve days, and after twelve days they can find nothing wrong with him. He’s a cogent, bright, well-read, urbane young man. He’s in his mid-thirties.

There’s nothing about him that’s peculiar — other than, as you’ll find out — perhaps from somebody’s point of view, some of his beliefs or explorations or considerations; the stuff that we hope people will engage in in their own intellectual curiosity.[3]

In a similar vein, on July 30, 2014 UK blogger Christopher Spivey was arrested on “suspicion of harassment” in a 2AM police raid on his Essex residence.

A few days prior to his arrest Spivey posted an article on his site arguing that the May 2013 murder of British soldier Lee Rigby was a deception intended to incite anti-Islamic sentiment. Police refused to disclose what parties were subject to potential harassment.

“Among Mr Spivey’s online supporters are David Icke, the former footballer and BBC Grandstand presenter who has become known for his conspiracy theories,” the Daily Mail reports.[4]

There are clear historical antecedents to such state extremism. In his treatise on psychiatry’s political deployment in the Soviet Union, for example, Russian author and political dissident Alexandr Podrabinek points to how a designation of mental illness was an especially effective means for the state to disallow nonconformist thoughts from the public realm while maintaining its own legitimacy.

Those “who do not accept the lies and who are prepared to suffer for the sake of the truth … are few,” Podrabinek observes, “but the regime fears them more than all the thieves, murderers, rapists and other criminals combined, for they are armed with the truth. As Shakespeare wrote, ‘Thrice is he armed that hath his quarrel just.’”[5]

Because the truth about the USSR must be suppressed both within and without, and since “trials make too much noise, and execution without a trial is too scandalous,” an ideal “solution” is “declar[ing] political opponents mentally ill. Indeed, who would take a schizophrenic’s resistance seriously?”

Not unlike most Western psychiatric practitioners, Soviet doctors generally “designate[d] what they deem[ed] abnormal according to their unprofessional pseudo-standards: ‘mania of justice seeking,’ ‘Marxismomania,’ and the like.”[6]

Dissenters guilty of “agitation or propaganda” aimed at “Soviet authority” or with a like intent to “commit particular, especially dangerous crimes against the state” were routinely diagnosed as criminally insane.

“Almost without exception, the court accepts the recommendation of the commission and the trial becomes a mere formality.”

The defendant’s counsel as a matter of course argues for his client’s sanity against the commission’s judgment and without the aid of potentially countervailing evidence and opinion.[7]

In the spirit of such pseudo-scientific procedure, contemporary social scientists are closely aligned with Western countries’ severe police state policies and protocols seeking to address aberrant thought and expression.

Alongside Cass Sunstein’s well-known proposal to “cognitively infiltrate” research and social communities harboring non-official narratives on complex events, similar postulations have filtered into the literature that approach “conspiracy theories,”[8] even using terms such as “inoculation” and “metainoculation” against such views.[9]

“Despite the psychological comfort afforded by conspiracy theories,” one recent study asserts, “its attitudes are typically maladaptive. Conspiracies distract public attention from other more pragmatically important political issues and prevent constructive approaches to whatever issues they do address.

The political assumptions and implications evident in such a preamble are stunning.

Most significantly, its authors assume that certain reportage and observations emerging apart from official pronouncements and corporate media reportage–many of which appear in prominent online foreign and alternative news media–are of limited merit and may even be detrimental to the body politic.

Like their Soviet counterparts, such social scientists invariably become part and parcel to the enforcement of what the state authorizes as “permissible” thought and discourse.

The state’s resort to psychiatry suggests a desperate move as non-sanctioned reports and analyses receive greater consideration than ever before via the internet.

“[T]he negative stereotype of the conspiracy theorist–a hostile fanatic wedded to the truth of his own fringe theory–accurately describes the people who defend the official account of 9/11, not those who dispute it.”[11]

Still, as the foundations of civil society further erode to elite prerogatives under state auspices, false narratives remain foregrounded through the publicity of fear and quiescence augmented by corporate media disinformation and scientific authority.

When such fictions take up residence in popular consciousness and memory the broader society travels down one way historical trajectories not of its own choosing.

The prospect of counterpublics applying reason to known facts and evidence is the Inner Party’s greatest fear–one now being met with police state measures and phony science to subdue.

[4] Stephanie Linning, “Blogger Arrested in 2AM Raid on His Home After Claiming Lee Rigby’s Murder Was an Anti-Islam Hoax,” Daily Mail, July 31, 2014.