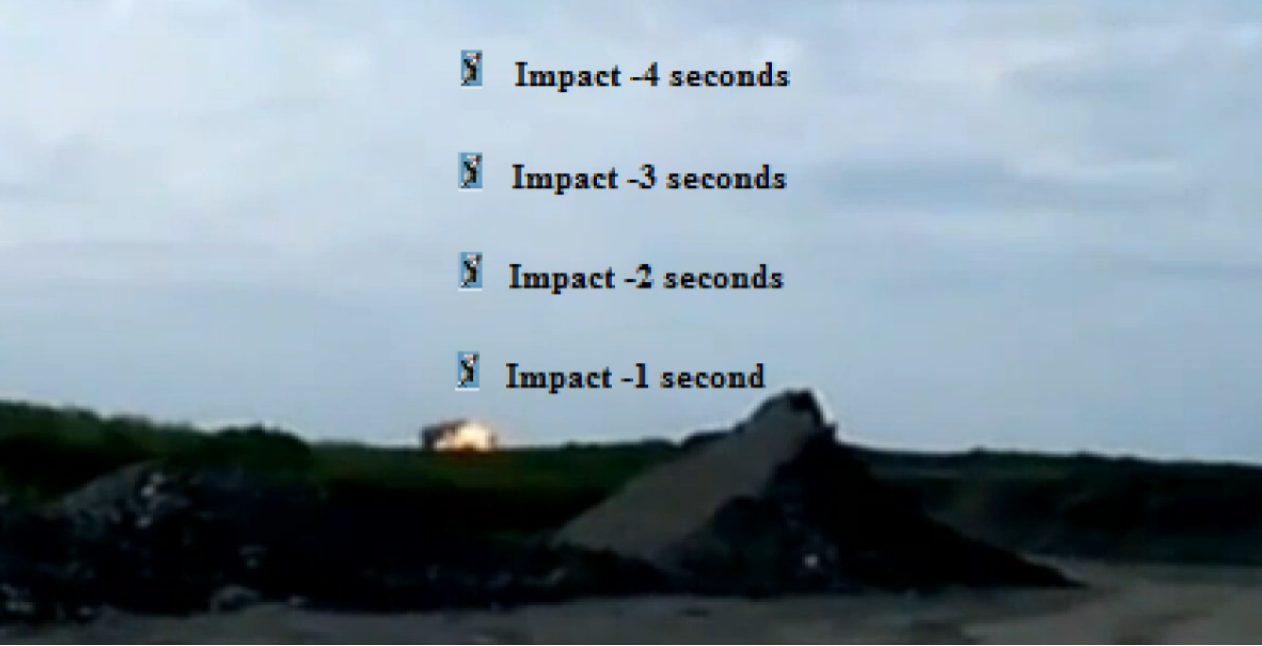 The headline photo for this investigative report by AUN-TV shows the countdown of what the lone video of the impact should have shown, a clearly visible Boeing 777 falling to the impact point.

The great mystery of the supposed missile shoot down of Malaysian Flight MH-17 is that there is no video or photo evidence of MH-17, or debris from it, falling to earth.

In fact not one single pixel on the accepted lone video of the supposed impact of MH-17 shows that anything fell to the earth, before the ground explosion. Yet ground photos taken considerably after the explosion, indicate a plane did fall. 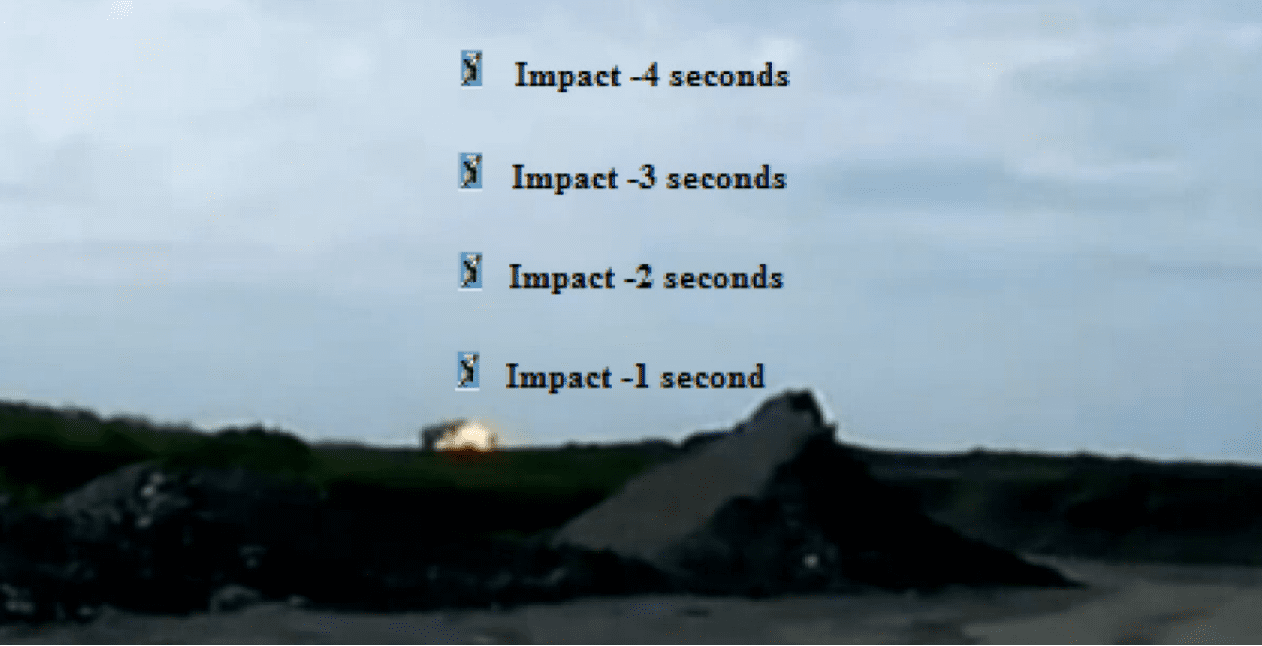 At the resolution and distance of the video, a whole 777 is about 43 pixels. A pixel is each dot or square in a digital image. There are 4 seconds of video before the ground explosion and the video appears to be at the standard 30 frames per second.

The math for this situation is that the video should show 43 X 30 X 4 = about 5,160 pixels showing the 777 falling to earth, if it was completely intact. Yet if you closely watch the video, frame by frame, there is not one of those over 5,000 pixels that shows up.

If the 777 had broken into 3-5 major pieces and about 50 smaller but still significant pieces, as ground pictures indicate, the pixels that would be detectable would increase, not decrease.

With that knowledge I know that each pixel is an average of the color seen in that area and even if 1/5th of a pixel’s width has a foreign object in it, of a different color, the color of the entire pixel will be altered and detectable.

Each pixel at the explosion point appears to be about 20 feet. So even a 4 foot across object should show up in this video by altering the color of a pixel and this is further assisted by the downward movement.

The movement would show the pixel being altered, then in the next frame going back to the color it was before the small objected passed through it. The 4 seconds of pre-explosion video equals 120 video frames to detect wreckage and smoke.

AUN-TV encourages you to watch that video and to magnify it yourself:

The above 4,3,2,1 second countdown to impact photo is based on the plane falling to earth at 200 MPH or 293 feet per second. The terminal velocity of a 777 after it has been hit and partially broken up by a missile is variable.

Black box data from another jetliner that fell from high altitude indicated a downward velocity of 125 MPH.

A F16 with power off and perfectly intact has a terminal velocity of 800 MPH pointed straight down. 200 MPH for a partially broken up 777, is on the high side.

That means at 200 MPH the plane will fall about 1.5 plane lengths per second.  As reported in a prior AUN-TV story on MH-17

the Bagram 747 crash indicates fireballs from large jetliners crashing to earth are about twice the length of the jetliner. So what should be in the video, can be stimulated as has been done in the above photo. 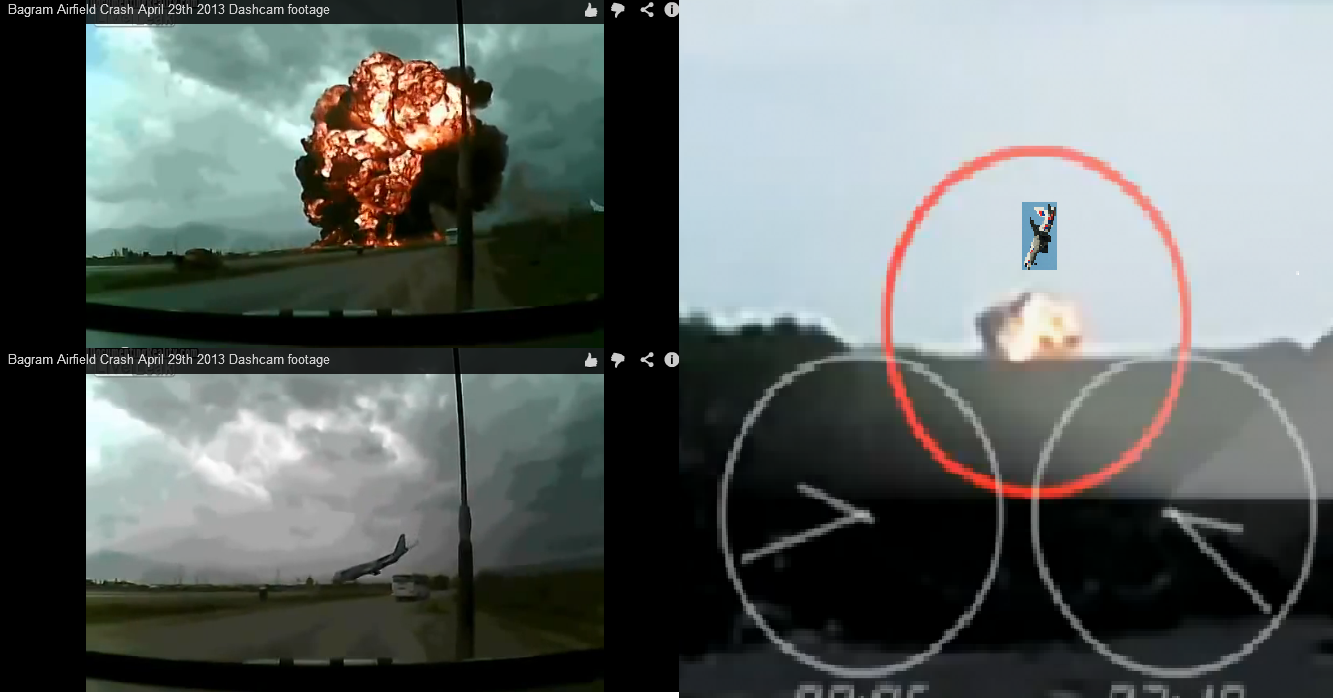 AUN-TV has magnified equally the lone crash impact video, both what should have been seen, if it was a 777 falling to earth, and what was seen, and placed them side by side. 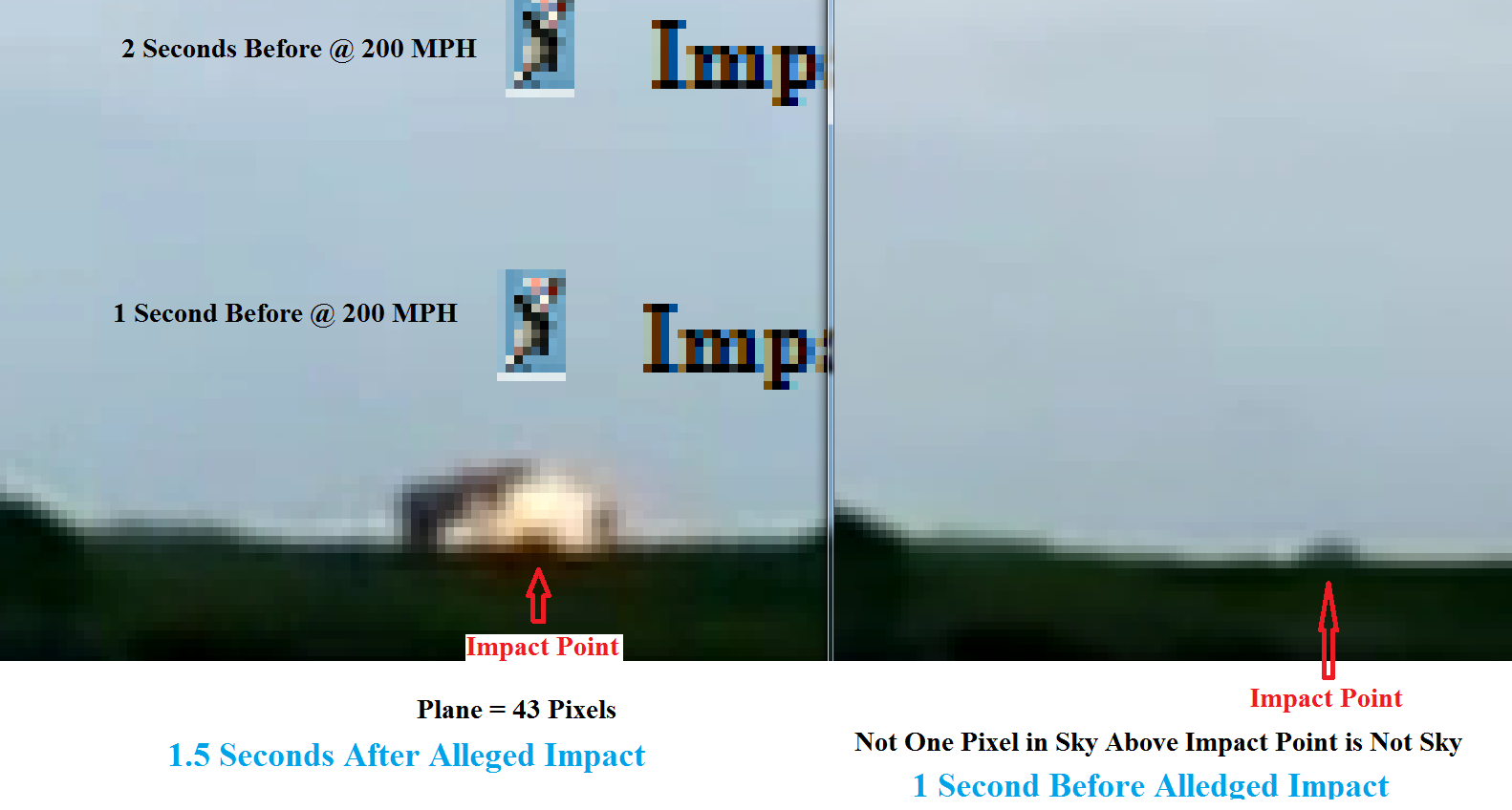 The above photo is magnified to the point the individual pixels are visible. The 777 would be very visible while watching the video at normal speed without magnification. Watch the video above and see if you can see anything at all in the sky?

The video shows not one single discolored pixel above the crash impact point in the four seconds before the fireball. How can that be? What if the plane was in 20 pieces, not one?

The answer is that it would be even more visible, as in about 60-120 pixels being altered per frame. The section of 777 cabin in this picture is 20 feet across and contrasts starkly against the sky. It would have been easily visible in the video by itself, if it was in the sky. 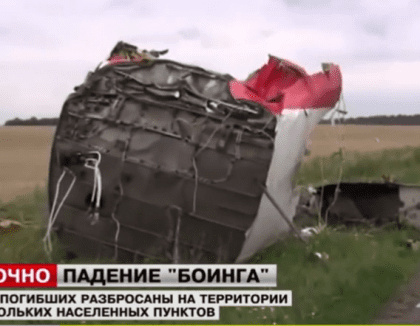 So does the accepted impact video seems to be conclusive proof there was no air to ground crash? How can that be? The ground photos, which are mysteriously taken a long time after the crash indicate an airliner, a 777, did crash on and around the city of Hrabove, pop 1,000.

There are more cellphones in the Ukraine than people. So there should be about 1,000 cellphones, most with cameras, in Hrabove.

This Guardian report and video makes it clear that the people there heard an explosion in the sky and then saw the sky rain parts and people.  A college educated Ukrainian makes about $500 a month.

If just one of the 1,000 people in Hrabove did what people normally do during historic events, pull their cell phone out and take videos and pictures, not only would they do a public service for the crash investigation, they could have sold the video to a news organization for probably over $50,000, or about 9 years of income.

Not one photo or video has ever appeared that was taken from Hrabove of anything in the sky, the fireball, or the massive smoke cloud that lasted for 20 minutes after the crash.

The first pictures and videos from Hrabove appear to have been taken about one hour after the supposed crash, by outsiders. Seemingly impossible.

You can watch that video of eyewitnesses and crash wreckage here. 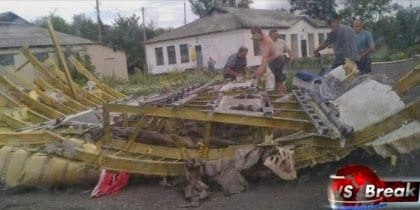 CNN dealt with this contradiction, apparently by censoring Anderson Cooper mid-sentence and mid-word when he notices, on first viewing the video, there was no plane. At AUN-TV we believe in not censoring facts or logic.

Just as in a police crime investigation, we believe in avoiding conclusions at first, until you have the evidence. Since the evidence is contradictory, we are reporting that is the case.

AUN-TV is the first news company to report the lack of a plane or debris in the sky in the impact video, that we are aware of. In regard to news companies censoring the news, that is common place. But Russia, both sides in the Ukraine and the USA have a great deal at stake.

This crash, if there was one, has already caused billions of dollars of sanctions. There is talk of the Cold War being restarted 25 years after it ended.

If this video is faked, why is none of the four key parties pointing that out?

That is another mystery about MH-17. More is at stake in regards to where blame it placed on MH-17 than anything else in Asia, and possibly the world, yet no one is challenging the video.

A. The video of the impact is faked.
B. The ground wreckage is faked.

To fake the impact video is quite easy, but makes no sense that no one has challenged the video, except AUN-TV and a few others, being so much is at stake.

The video indicates whoever shot it, was expecting the ground explosion, so they were likely a party to it.

If the crash site was faked, it does explain why there were no real time photos or videos of the crash in Hrabove, only from many miles away.

But this would require 1,000 people to go along with a coverup and to also have a Boeing 777-200 to fake the crash scene with.

Where could anyone possibly get a Malaysian Airlines Boeing 777-200 from?

In March Jason Kissner, writing for AUN-TV.com, predicted another airliner could disappear. The odds of that are less than one in a million, that the same model, same airline, would disappear. It does make it possible to fake a 777-200 wreck.

105,000 Smart Meters Removed in SK, Canada, for Safety Concerns Previous post
How to Easily Cleanse Your Body of Parasites Next post