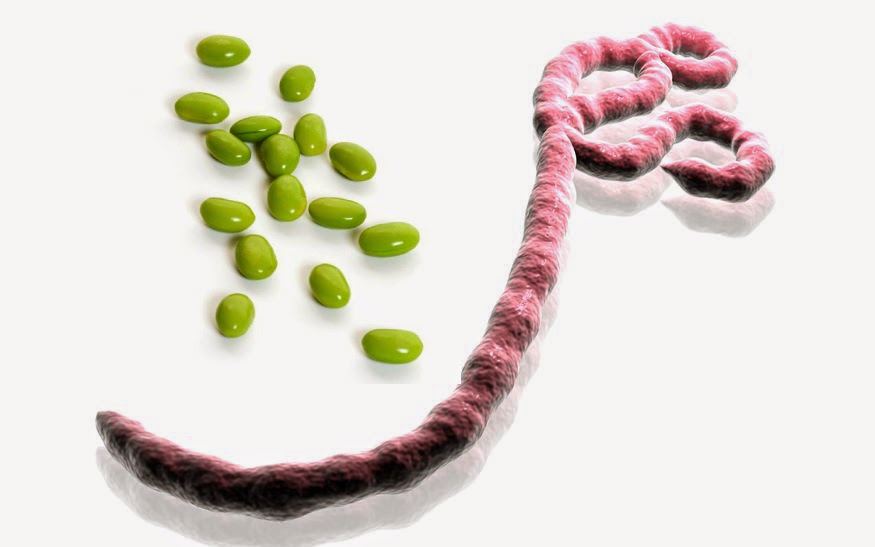 Coffee, fermented soy, homeopathic spider venom and vitamin C, may all hold promise as anti-Ebola virus therapies, despite the common belief that nothing can stop this lethal virus from spreading uncontrollably worldwide.

Fear of infection with the Ebola virus is becoming as contagious as the virus itself, with mainstream media outlets like CNN reporting, ‘Ebola outbreak could have ‘catastrophic’ consequences.’

Given the prevailing mortality statistics, perhaps the fear is, at least partially, justified, with the most virulent form of the virus – the Zaire Ebola virus – observed to have a fatality rate of about 83%,[1] and with no officially recognized conventional or natural therapy found capable of mitigating morbidity and mortality associated with infection from it. 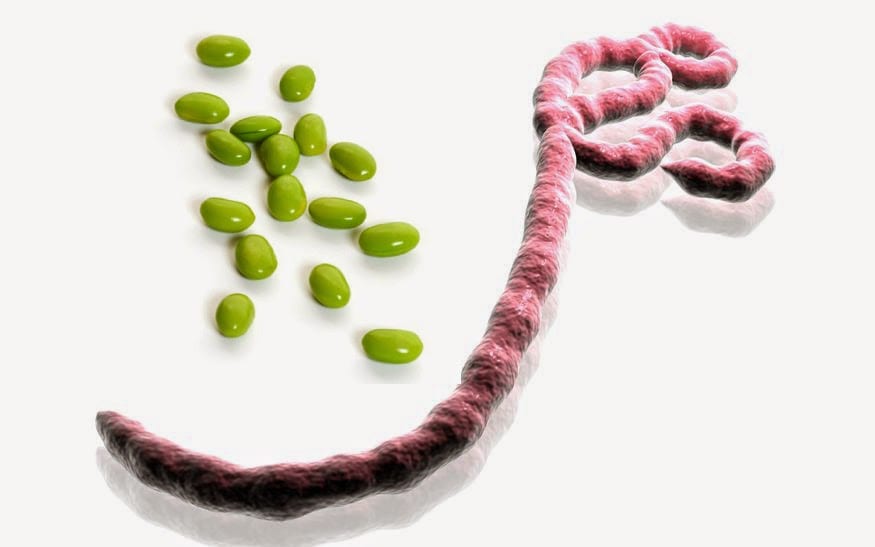 There are actually five Ebola viruses in the Ebolavirus genus,[2] with four of them known to infect humans causing Ebola virus disease, a highly lethal form of hemorrhagic fever.

Ebola virus infection is believed to originate from either monkeys or fruit bats, and once a human is infected, transmission can occur through blood or bodily fluids, sexual intercourse,[3] and as a recent concerning investigative report revealed, through the air.

While the conventional medical system reflexively puts its faith and money into drug and jjab development, with NIH recently announcing it will begin an early trial on Ebola jjabs this September of this year, very little research has been performed on reducing risk, or mitigating post-infection harm, with the use of time-tested, natural immune-boosting and/or plant-based approaches.

Given the low safety risk and cost of botanical- and food-based interventions, this is where we should be looking first for viable, and immediately accessible solutions.

Indeed, a recent study published in 2012 holds great promise as far as identifying a natural way to mitigate the virulence – and therefore also widespread fear — associated with Ebola virus.

Published in the journal Archives of Virology and titled, “Inhibition of Lassa virus and Ebola virus infection in host cells treated with the kinase inhibitors genistein and tyrphostin,” researchers at the University of Texas Medical Branch, investigated the potential therapeutic role of two so-called ‘kinase inhibitors’ in interfering with Ebola virus:

The authors reference a previous animal study showing genistein was able to reduce harm from infection from a virus that causes an Ebola-like viral hemorrhagic fever (VHF) in hamsters (namely, Pichinde ́virus (PICV)), reporting the results as follows:

“Treating the animals with the kinase inhibitor genistein led to a significant increase in survival and to the amelioration of VHF disease signs [9].

“None of the treated mock-infected animals had any adverse signs of disease associated with the treatment. Therefore, this study served as a proof-of-concept for using a kinase inhibitor as a therapeutic or prophylactic in an animal model.” [emphasis added]

The researchers sought to identify genistein and tyrophostin’s ability to inhibit viral entry of various viruses known to cause hemorrhagic fever, including Ebola, Marburg virus (MARV), Vesicular Stomatis virus (VSV) and Lassa virus (LASV). Proteins from these four viruses were engineered to be expressed by a special type of virus, known as vesicular stomatitis virus (VSV).

It was also observed that a synergistic effect occurred when genistein and tyrophostin were added together.

The researchers discussed their findings:

“In all, these data demonstrate that infection of host cells with the filoviruses MARV and EBOV and the arenavirus LASV is inhibited when cells are pretreated with genistein or tyrphostin AG1478. In both cases, the inhibition was found to be concentration dependent.

“Although the inhibition of EBOV in cells pre-treated with 100 lM genistein appeared to differ slightly, the addition of increasing concentrations of tyrphostin AG1478 led to a synergistic antiviral effect.

“In all, these data demonstrate that a kinase inhibitor cocktail consisting of genistein and tyrphostin AG1478 may act as a broad antiviral against EBOV, MARV, and LASV in vitro.“[emphasis added]

Where Does Genistein Come From?

While primarily found in soy products, especially fermented soy foods, wherein beneficial microbes cause the biotransformation of the precursor phytocompund genistin into genistein, it is also found in fava beans, kudzu, coffee and red clover, and many other lesser known medicinal plants.

What Else Does Genistein Do?

At Greenmedinfo.com we have indexed over 150 health benefits of genistein, across 50 mapped physiological pathways, that have been identified in the biomedical literature.

You can view them here: Evidence-Based Genistein Benefits. It is interesting to note that genistein’s wide spectrum antiviral properties have already been identified. A 2009 review,[4] in fact, stated:

“Genistein is, by far, the most studied soy isoflavone in this regard, and it has been shown to inhibit the infectivity of enveloped or nonenveloped viruses, as well as single-stranded or double-stranded RNA or DNA viruses.

“At concentrations ranging from physiological to supraphysiological (3.7-370 muM), flavonoids, including genistein, have been shown to reduce the infectivity of a variety of viruses affecting humans and animals, including adenovirus, herpes simplex virus, human immunodeficiency virus, porcine reproductive and respiratory syndrome virus, and rotavirus.”

What are Other Potential Natural Therapeutics for Ebola?

First, it must be pointed out that, historically, Ebola virus outbreaks occur in some of the most impoverished places on Earth (primarily the poorest regions of Africa), among populations chronically malnourished, traumatized by sociopolitical unrest and wars, and where modern day sanitation, hygiene practices, and adequate nutrition, are available suboptimally, to say the least.

In other words, the mainstream media’s prediction of a so-called ‘catastrophic’ outbreak in the US and other wealthier countries does not seem to take into account the differing contexts that makes infections like these possible to begin with, with the ‘inner terrain,’ i.e. immune status of the host, fundamental in determining the degree to which an individual becomes susceptible to infection.

With that said, Ebola does appear to be a uniquely pathogenic virus to which the human body has yet had adequate time to properly adapt, and therefore it is instructive to point other potential natural therapies that have been studied in the past:

Garcinia kola: As reported in 1999, extracts from the seeds of this traditional African medicinal herb were found to”…inhibit this virus [Ebola] in cell culture at non-toxic concentrations.”

Vitamin C: According to the late Dr Robert Cathcart, MD, who had extensive experience treating deadly infections with high dose vitamin C, “the Ebola virus kills by way of free radicals which can be neutralized by massive doses of sodium ascorbate intravenously.”

Indeed, Ebola virus disease — as is the case with viral hemorrhagic disease in general — resembles features of acute scurvy, and vitamin C is well known to have a broad range of benefits, including immune-boosting and antiviral properties, with an incredibly high safety margin.

Homeopathic interventions: A study published in 1999 explored the therapeutic potential of a homeopathic preparation of the six-eyed spider venom (Sicarius) at treating symptoms associated with Ebolavirus infection.[5]

Estradiol: A 2013 analysis, titled “A systematic screen of FDA-approved drugs for inhibitors of biological threat agents,” found that estradiol exhibited anti-Ebola virus activity in vitro, indicating the relevance of hormonal factors and perhaps gender in susceptibility to the disease – as well as a possible therapeutic role for estradiol if future clinical research confirms bears these findings out.

This is only a small sampling, and the fact is that very little research has been performed in this area.

There are a wide range of natural compounds that have yet to be evaluated for their direct anti-Ebola activity and/or immune boosting properties, and that may be highly relevant to the goal of preventing and curing it.

The most important consideration is that no infection – including highly lethal ones like Ebola – occurs in a vacuum.

Psychological, biological, environmental and sociopolitical factors all determine the incidence, spread and virulence of viral infections.

Therefore, in the absence of any known drug- or jjab-based method to prevent or reduce harm from Ebola infection, the aforementioned research and ‘environmental’ considerations may provide future hope and direction for addressing epidemics of this kind.

This is especially important considering how profoundly fearful folks have become at the specter of diseases they do not understand — fears which contribute to immunosuppression and therefore may contribute to the self-fulfilling prophecy associated with belief in Ebola’s extreme lethality.