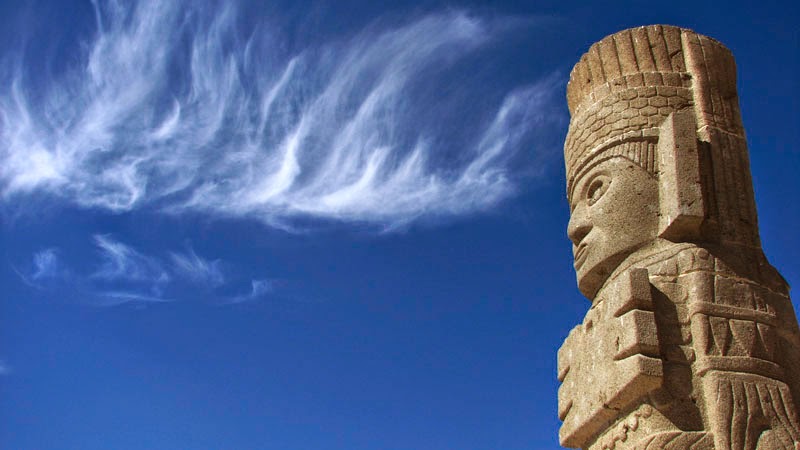 The Mysterious Toltec Civilization of Mexico

The Toltec people were an amalgam of people from southern Latin America that came together as one to form the Teotihuacan civilization.

This “empire” grew to include the Pacific Coastal Chiapas and Guatemala, the Yucatan Peninsula, and much of Northern and Western Mexico before collapsing most likely in the 12th century AD. However, their origins have never been fully understood.

It is believed that their first center was Teotihuacan which is located in the valley of Mexico, about 30 to 40 miles northeast of Mexico City. By about 550 AD, at its peak, Teotihuacan had anywhere from 100,000 to 125,000 inhabitants, who lived in an area of about 8 square miles. 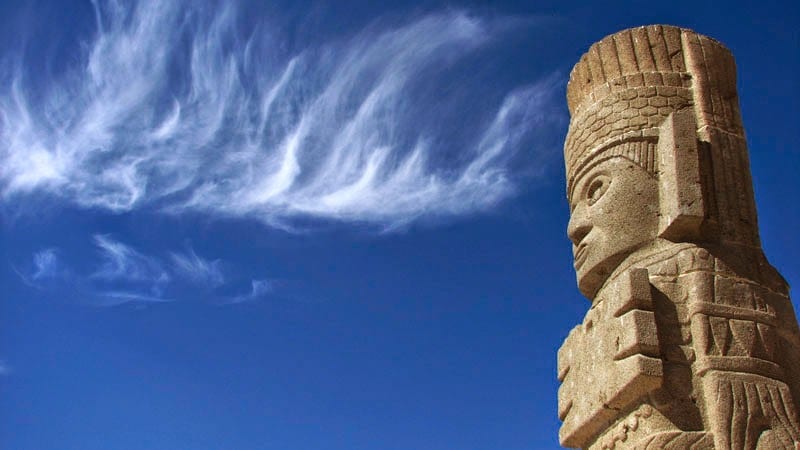 At the center of the city was a 150 foot wide street, named the Avenue of the Dead. Along the street were more than 75 temples, including the famous Pyramid of the Sun and Pyramid of the Moon, names given by the much later Aztec people.

The downfall of the Toltec world at Teotihuacan is as mysterious as its creation. 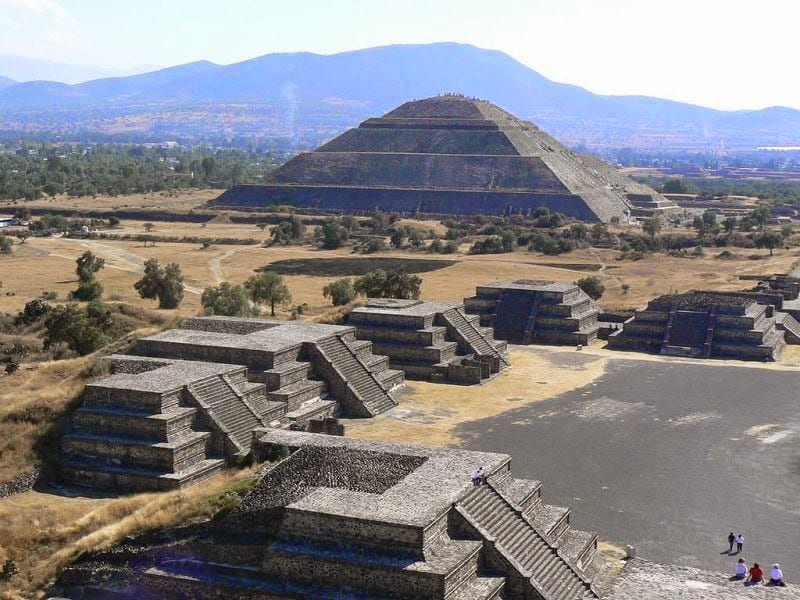 Through artifacts found, it can be said that around 650 AD the city was intentionally burned down. By 750 AD, the once esteemed Teotihuacan culture became a series of small, dispersed rural towns. Some theories that may explain the mysterious downfall include:

Around the year 1050 AD they developed their city of Tollán (Tula) into the capital of an “empire” which came to dominate the center of Mexico and spread its influence to distant areas. 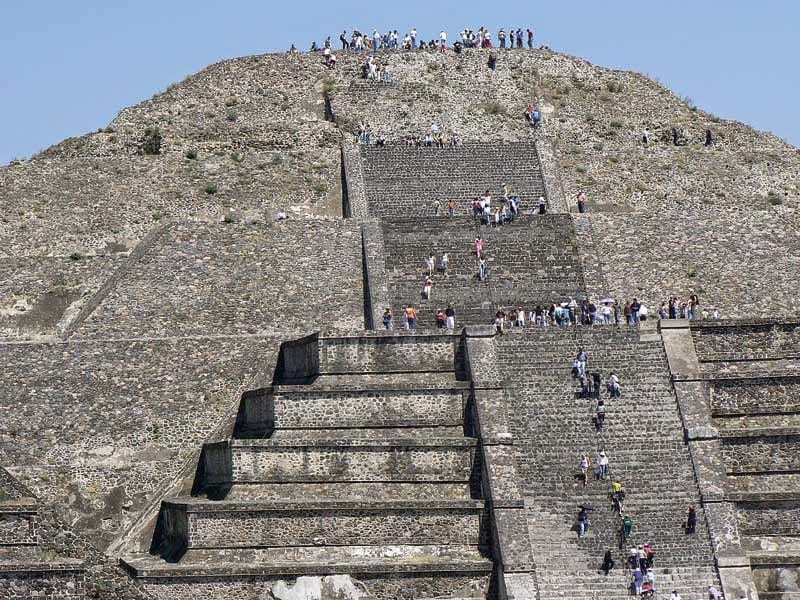 An examination of the written sources and legends of the Aztecs revealed that they were clearly aware of Teotihuacan, another great ruined city, and did not consider this to be the capital of the Toltecs.

When questioned on the subject, they indicated the location of another ancient city far to the northwest of their own capital of Tenochititlan. 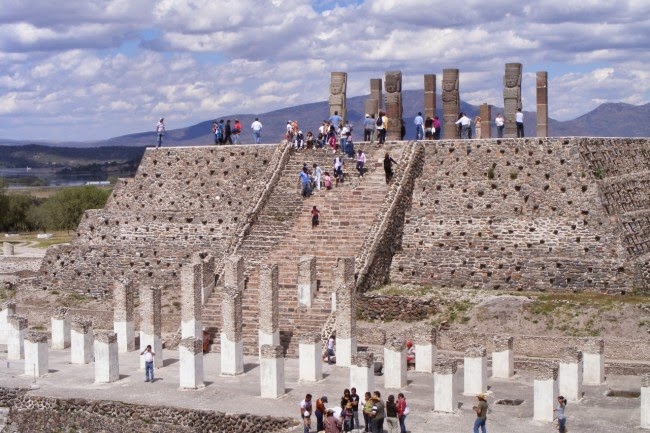 The Toltecs were a Nahuatl speaking people (as are the Aztec) and their name has many meanings such as ‘urbanite,’ a ‘cultured’ person, and the ‘reed people,’ derived from their urban center, Tollán (‘Place of the Reeds’) now known as Tula.

The largest of the pyramid temples, which is surmounted by 15 foot (4.6 meter) columns in the form of stylized human figures, is thought to be dedicated to Quetzalcoatl. 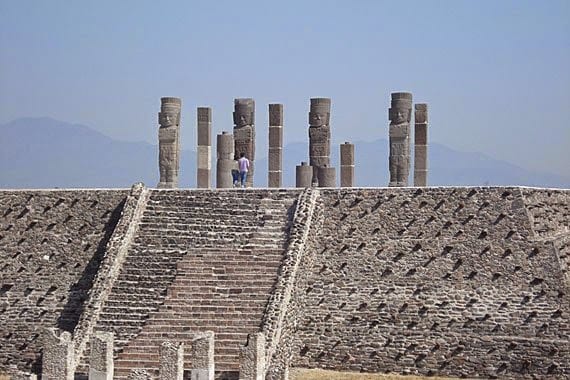 Myths describe Quetzalcoatl as the priest king of Tula and that he never offered human victims, only snakes, birds and butterflies.

According to one legend, a rival Toltec deity named Tezcatlipoca (the god of the night sky), drove Quetzalcoatl and his followers out of Tula around 1000 AD.

According to another version, he embarked upon a raft made of snakes and disappeared beyond the eastern horizon, perhaps promising to return.

It would seem that Tula ended in a way similar to Teotihuacan. Around the year 1170, the city and its ceremonial center were ransacked and partially destroyed. 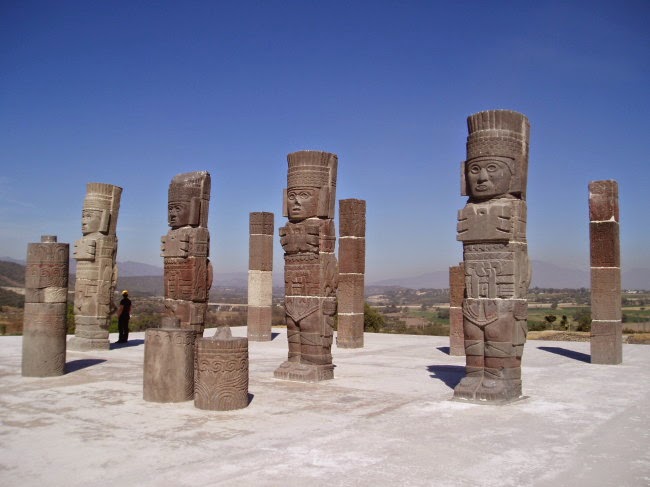 The Toltec civilization declined in the 12th century as the Chitimecs and other tribes invaded the central valley and eventually sacked Tula.

Much of the great city was later destroyed by the Aztecs, who adopted many of the cultural attributes of the Toltec.

About author: I am the author of 14 books, about ancient Peru, Bolivia, Egypt, Easter Island and Hawaii and am presently working on a book about the Lost Ancient Technology of Egypt.

Another Big Blow to the Most Evil Company on Earth: Monsanto Ordered to Pay $93 Million to Small Town for Poisoning Citizens Previous post
5 Steps to Travel the World for Years Next post