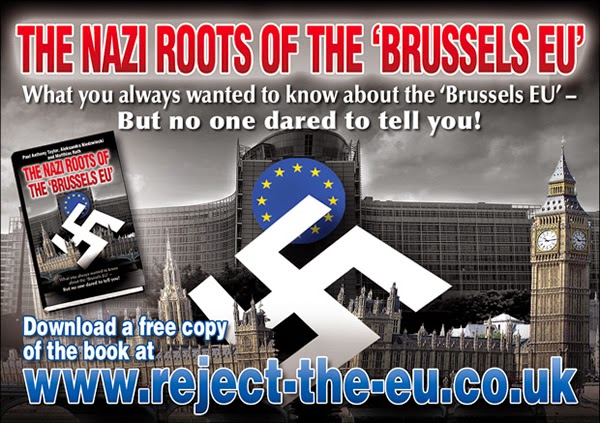 The Nazi Roots of the ‘Brussels EU’

Now that the dust has settled, the people of the world deserve to learn the facts behind this PR event: 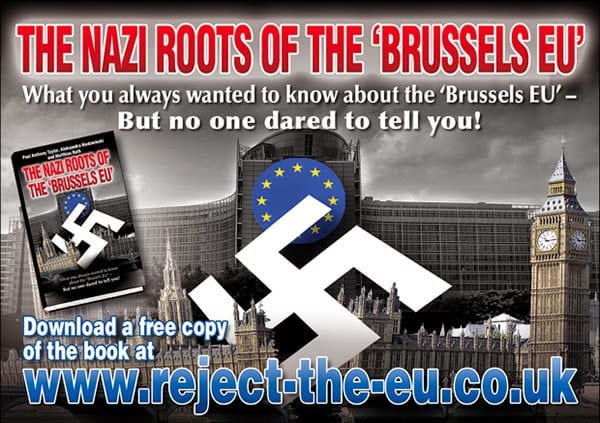 1. The ‘Brussels EU’ is not a democratic body. Neither its president nor its executive body, the so-called ‘EU Commission’ can be elected – or unelected – by the people.

2. The 27 members of this ‘EU Executive’ are appointed on behalf of corporate interests – namely, the chemical, petrochemical and pharmaceutical industry, the ‘Oil and Drug Cartel’. These ‘Commissars’ rule Europe with the help of more than 50,000 paid bureaucrats – none of whom are democratically legitimized either.

3. The ‘EU Parliament’ – parading as a democratic institution – is little more than a ‘fig leaf’ – and lacks crucial hallmarks of any democracy, such as the right to initiate new legislation.

4. The blueprints for this undemocratic construct derive from the intended post-World War II plans of the Nazis and their main corporate financiers, the infamous IG Farben Inc. (BAYER, BASF, HOECHST etc.), the world’s largest chemical, pharmaceutical Cartel at that time.

5. The first president and chief architect of what is known today as the ‘Brussels EU’ was Walter Hallstein, a German lawyer. Before and during WWII, Hallstein had been a key architect of the new dictatorial ‘world order’ via which the Nazi/Cartel Coalition had planned to rule Europe and later the world.

In May 1938 Hitler met with Mussolini in Rome, Italy, to plan the military conquest of the world – and to plan the post-WWII world under the rule of the Nazis and their corporate financiers, the Chemical, Oil and Drug Cartel (left).

One month later, in June 1938, German lawyer Walter Hallstein was part of the official Nazi State delegation to Rome that finalized the legal framework of the intended ‘New World Order’ – to be implemented after an anticipated Nazi/Cartel victory. On January 23, 1939, Hallstein revealed these outrageous plans in a public speech in Rostock, Germany (center).

On March 25, 1957, less than two decades later, the same Walter Hallstein was in Rome again. He became one of only 12 signatories of the ‘Treaties of Rome’ – the founding documents of what is known today as the ‘Brussels EU’ (right). From 1958 to 1967 he was first ‘president’ and the ‘chief architect’ of this construct.

6. The center piece of this plan was to rule the conquered world by means of a ‘Central Cartel Office’ that would set the rules for all sectors of life – including economics, finance, trade, patents and any other aspects of civil and criminal law – outside of any democratic control. Two decades later, Nazi-planner Hallstein copied this system for the ‘Brussels EU’ saying: “Every action [!] is initiated by the [unelected] Commission as the executive organ of the Community.”

7. With the help of ten thousand bureaucrats at that time, Hallstein built the ‘Brussels EU’ as an almost exact replica of the Nazi/Cartel plans. Astonishingly, none of the politicians who supported the build-up of this political construct over the past decade felt a responsibility to alert the people of their countries and the world about the undemocratic nature of the ‘Brussels EU’ – or its Nazi roots.

8. On May 21, 2010, our Foundation published the above facts and the substantiating documentation in this newspaper. Ten days later, on May 31, 2010, the then German President Horst Koehler – who had been born in Nazi-occupied Poland in 1943 – resigned from his office in a surprise move that has remained largely unexplained to this day.

9. With the exposure of its Nazi roots the ‘Brussels EU’ had lost all political legitimacy. Obviously, no political organization that derives directly from the drawing boards of the Nazi regime can survive in the democratic world of the 21st century. While some responsible politicians distanced themselves, the political stakeholders of the Cartel launched a desperate public relations battle in a futile attempt to reverse the rapidly diminishing credibility of the ‘Brussels EU.’

10. On September 12, 2012, EU Chief Commissar Manuel Barroso surprised the world with his proposal of a federal ‘United States of Europe’. But this plan was neither new nor democratic. Barroso had merely ‘borrowed’ it from his predecessor, Nazi-planner Hallstein. In his 1969 book,‘The Unfinished Federal State [of Europe]’, Hallstein had praised his own deceptive plan of a pseudo- democratic ‘Federal Europe’ – under strict rule of the Cartel – as a concept of “unprecedented audacity.”

Remarkably, at the same time as the Nobel Peace Prize was awarded for the alleged role of ‘Brussels EU’ in keeping peace in Europe over recent decades, Barroso announced the launch of a European army – with the likely goal to secure global Cartel interests and markets.

By Dr. Matthias Rath, Dr. Rath Health Foundation; | Dr. Rath is the author of ‘Why People Get Heart Attacks… But Animals Don’t!’

About author: Dr. Matthias Rath has become a voice of conscience exposing the global conquest plans of the chemical/pharmaceutical Cartel in our time. Attacked by Cartel media the world over, Dr. Rath and his Foundation have received prestigous awards for civil courage. The ‘Relay of Life’ Award – presented by survivors of the KZ Auschwitz and other Nazi concentration camps was conferred with the mandate: ‘Never again!’