By-Passing the Reptilian Brain to Restore Your Creative Power

Following my last article The Law of Attraction and The Power of Your Mind, the subsequent information intends to further expand into the application of the necessary skill of discernment in order to manifest your desired reality.

To recap: Your mind is a sophisticated broadcasting system. We emit and absorb frequencies according to the frequencies (thoughts and belief systems) that we hold in our mind. In order to reset our innate power of creation, we must get our mind right by consciously applying discernment to every frequency (thought or emotion) that we emit and absorb.

In other words, choosing to accept or reject frequencies is the first step in re-setting your broadcast system (your mind). It is how we begin to attune ourselves to source energy, our higher self, our life’s purpose, happiness, love, our true potential, etc.

Since the average individual’s mind broadcasts in the ballpark of 70,000 thoughts per day, we would drive ourselves absolutely mad trying to discern (monitor) every one of those thoughts.

Especially since the vast majority of those are ingrained in the sub-conscious through belief systems that have deeply conditioned our habitual neuron pathways. The good news is that there is a shortcut to monitoring your thoughts and re-attuning yourself to your true manifestation potential. That shortcut is your emotions: your innate guidance system.

This is a basic process that is fundamental to manifestation. Focus on feeling good! When your emotions are signaling that something (a frenquency) doesn’t feel good, apply discernment and re-focus your vibration on anything that feels good (a higher frequency). Listen to the ‘whispers’ (aka frequencies) life is offering to you as Oprah would say….

Ok, now it’s time to elaborate on the implementation of discernment, here it is:

Detachment is the state of being OBJECTIVE. In order to discern (or filter if that makes more sense to you) a situation (frequency) that you have manifested into your current reality, you must be able to detach yourself from it before compulsively (reptilian brain response) reacting to it. Being ‘impulsive’ is to react without forethought.

This will be a great challenge at first, I’m not gonna sugar coat it, I’ve found that this can stir up all kinds of change in your life. Because until recently in our history, we had been conditioned to operate and function mainly out of the reptilian brain.

We had been operating/ manifesting out of the ‘survival’ mode section of the brain. Once you can understand this concerted mental oppression, you can begin to re-train your mind (free yourself from constant reptilian brain generated reaction) and re-set your innate human gift of creative power.

This will be easier to apply if you can give yourself a minute to comprehend and really soak in the following aspects about the functioning of your brain:

Humans have 3 independent yet interconnected sections in our brain:

1) The Reptilian section;
2) The Limbic section;
3) The Neo-cortex section.

Each section has it’s purpose. 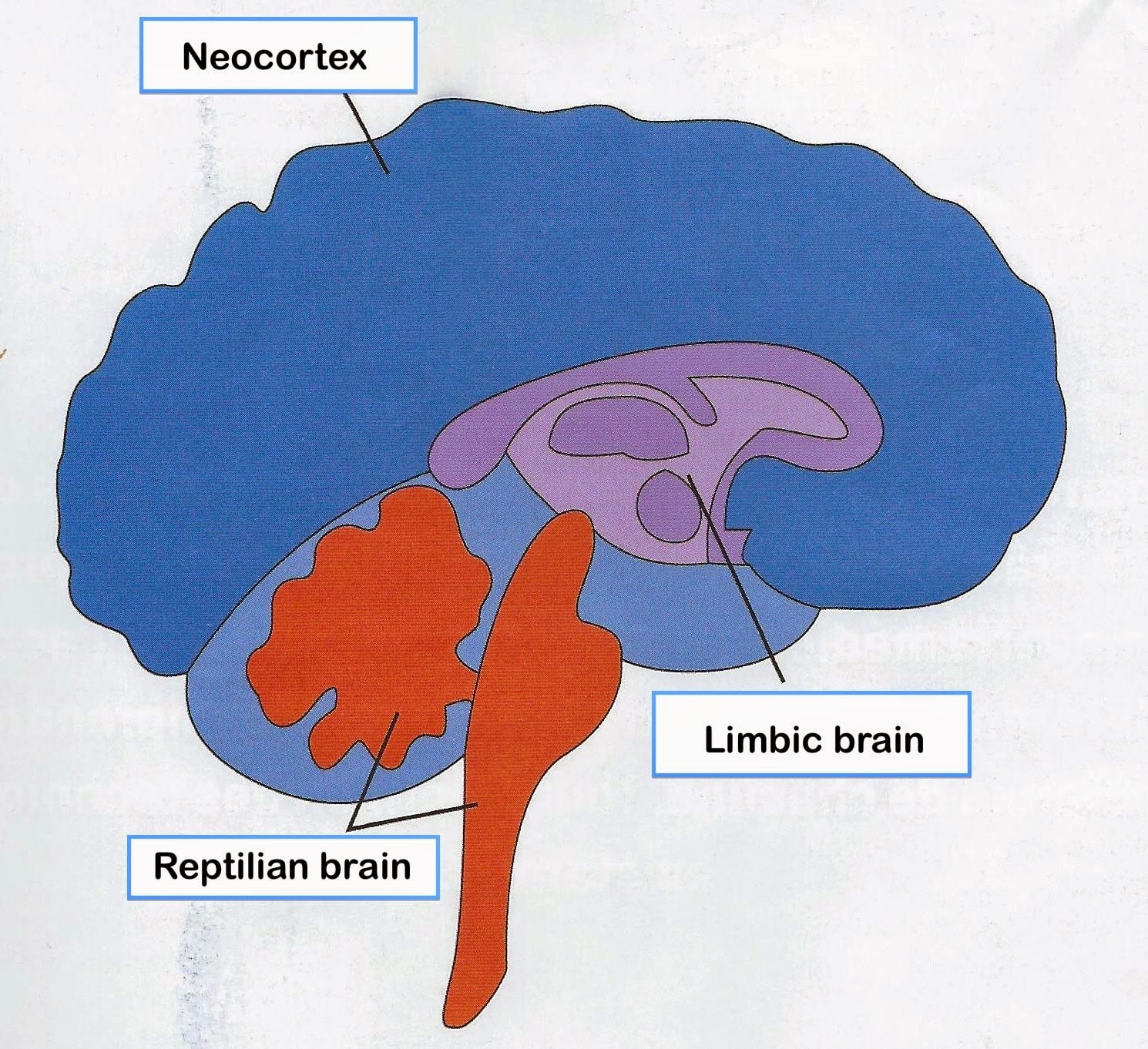 The Reptilian section (1) is the instant (no discernment) ‘survival mode’ response section of the brain. It is the oldest in terms of our human evolution, ‘The Old Brain’, The Reptilian Brain.

The Limbic section (2) is the section of the brain that first emerged in Mammals. It generates our feelings and emotions in regard to our current reality.

It has infinite abilities.  It is the evolved conscious section of our brain which is most in line with source, with our higher self, our true unlimited potential. It generates creation, manifestation, imagination, awareness, development, logical thinking, objectivity, empathy and most importantly: consciousness.

Each section has its necessary purpose, for now anyway (I foresee the reptilian section going into stand-by mode once we attune ourselves to our manifestation power; The Neo-cortex section of our brain.

In my intuitive opinion, I think every human today has the potential to eventually evolve through conscious effort which will eventually become automatic into a higher functioning brain capacity based in infinite love and respect which will see the evolutionary decline of the reptilian section of the mind).

Characteristics of the Reptilian brain include dominance (dominate or be dominated), aggression, sex and seeking a mate, rigidity, obsessiveness, compulsiveness, worship, fear, submission and greed.  These are all constricting and limiting frequencies.

That means that you must develop the ability to by-pass your reptilian brain frequencies through conscious DETACHMENT from the reptilian brain, by first recognizing it for what it is! It is simply a shift in perception that must occur within your consciousness.

By applying detachment to any situation through delayed reaction; aka objectivity (discernment filter), you can begin to re-create your reality because you allow yourself to properly use your mind to its full manifestation power. You make life happen for you according to your desires, instead of reacting to life happening to you.  You take your power back.

A few things to consider: the vast majority of advertising campaigns, media content and political propaganda these days are targeting the reptilian response section of the brain in the masses, hence creating a de-evolution of a collectively manifested reality.

Those who acquiesce to reptilian brain targeted triggers, perpetuate ‘survival’ mode for themselves and lose the innate gift we all hold to create a life of unlimited abundance. 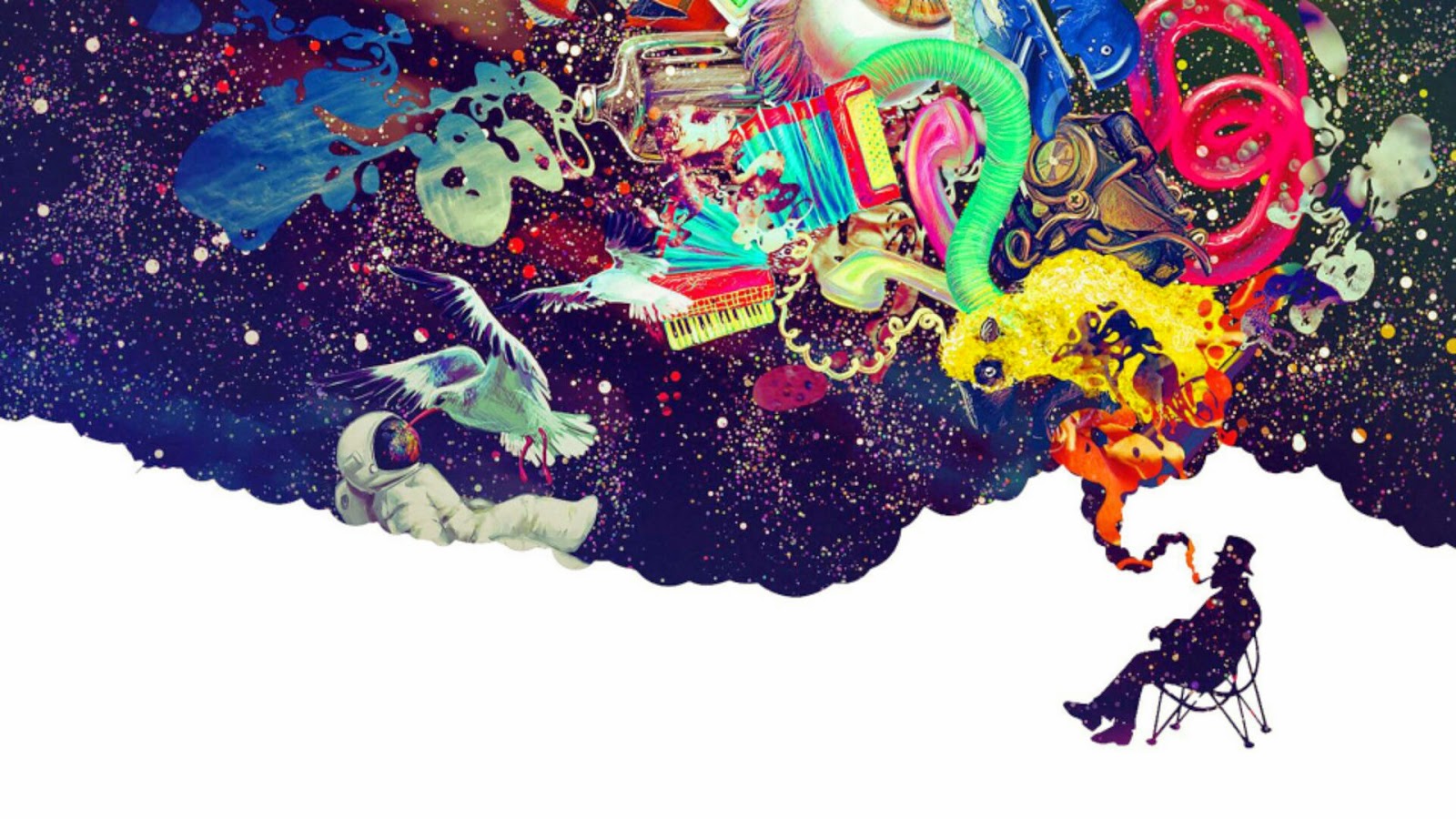 You may find yourself asking ‘why?’ Why is our current reality based in low vibrational reptilian brain frequencies if the knowledge about the amazing creative power of the Limbic and Neo-Cortex sections of the brain is already out there? Well, had you heard about it until now?

Were you taught this basic knowledge from Day 1 of your human experience here on Earth? Was it part of the imposed curriculum when you were attending school? Do we openly discuss this with our friends and family?

Do we talk about this basic concept in mainstream media? No. We’ve been collectively oppressed to operate within the reptilian section of the brain.

Ask yourself about religious stories that depicted the reptilian brain influence and the importance of over-coming it in order to achieve high vibration manifestation (love, abundance, etc.).

Consider which part of your brain is being triggered when you see an advertisement or a TV Show or a news program. Our current world is controlled by reptilian brain dominated authority. It’s in your face y’all!

Understand that as a human being, you are (well your brain is anyway) a hybrid of reptile, mammal and your true potential: creator. Upgrade your mind frequency and functioning through constant detachment and discernment and you will change your life.

It goes a little something like this. (*Hypothetical situation*) You are walking through the mall and a billboard with a sexually attractive model promoting whatever product ‘catches’ (*triggers*) your attention, and it’s on ‘sale!’

You instantly feel distracted, compelled to break stride, walk in and consider purchasing this product. That is how that scenario usually goes…

Now insert discernment into that scenario: You are walking through the mall with purpose, you are feeling good, and *oops* that advertisement catches your eye for a second.

The conscious  individual goes through a mind process something like this:

“Ok. Something within me attracted that low vibration manifestation, I understand that my reptilian brain is being targeted, no thank you, cancel that frequency, replace with high vibrational thought or good feeling emotion, done, continue moving forward.”

It’s a conscious process that will require constant effort at first, but it will become automatic over time once you persistently apply it to the point that you re-program your neuron pathways in a way that utilizes the full potential of your mind.

Understand the blessing of contrast that is provided with low vibrational manifestations (thoughts, emotions, circumstances).

This contrast is not meant to drag you down into lower vibrational responses (although it will if you don’t understand how to get your mind right), it is meant to assist you through this observed duality you achieved through detachment/discernment, to tune into high vibrational frequencies that are in line with your life’s bliss, your life’s purpose, whatever it is that you are desiring to manifest into your life.

Contrast and duality are tools (red flags) that help keep you in alignment (if perceived properly) and increase the specificity of your emitted vibration, to bring in what you want as quickly as possible.

Your perception needs to be shifted into the (2) and (3) section of the brain.  Nothing is ‘bad’ unless you invite it to continue to be ‘bad’.

Anything that ‘pops’ up into your reality that makes you feel bad (remember your emotions are your compass), they are simply the smack across your face you need to snap back into alignment and emit the frequency of what you want which was provided to you through that experience that you attracted to begin with.

“You cannot solve a problem from the same consciousness that created it. You must learn to see the world anew.”

The Best Radiation Detox for Optimum Thyroid Health: Zeolite and Coconut Oil Previous post
Victim of Modern Toxicity: The Confessions of a Hollywood Celebrity Next post