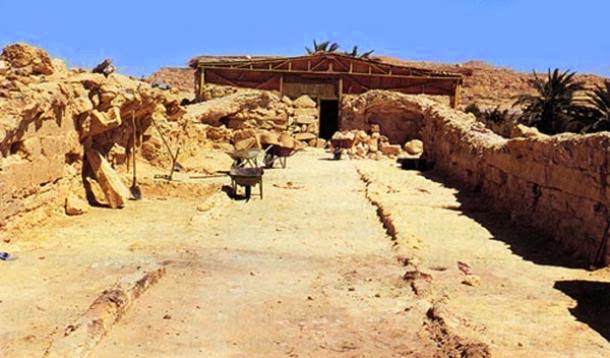 The worldwide media is currently amass with news stories about the exciting discovery of an enormous tomb in Amphipolis, Greece, and speculation has been mounting that it may belong to Alexander the Great (356-323 BC), or at least a member of his family.

The final resting place of the Macedonian king has been one of the greatest mysteries of antiquity, but it is one that may have already been solved.

Archaeologist Leana Souvaltzi claims she discovered the real tomb of Alexander 20 years ago in Egypt and has been blocked by the Greek and Egyptian governments ever since. 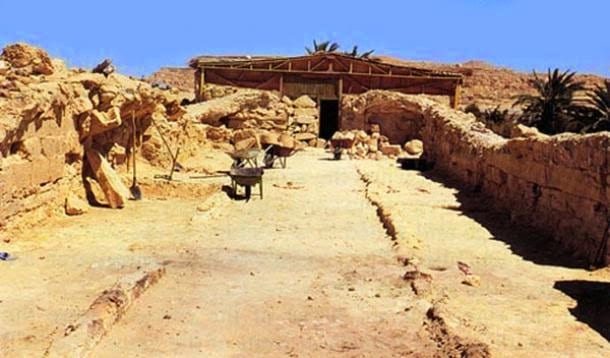 Alexander III of Macedon, also known as Alexander the Great, was born in Pella in 356 BC and was mentored by Aristotle until the age of 16. He became king of the kingdom of Macedon, a state in northern ancient Greece, and emperor of the PanHellenic alliance against the Persian Empire; he was also crowned Pharaoh of Egypt.

By the age of 30, he had created one of the largest empires of the ancient world, stretching from Greece to Egypt and into present-day Pakistan. He is considered one of history’s most successful commanders and became the measure against which military leaders would later compare themselves. 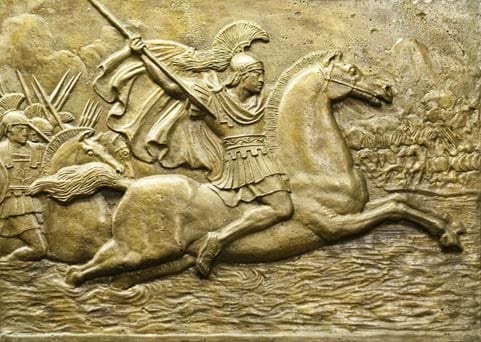 Relief depicting Alexander the Great and his army in battle. Source: BigStockPhoto;

Alexander died a mysterious death at the age of 32 in Babylon in 323 BC. He had been holding a memorial feast to honour the death of a close personal friend when he was seized with intense pain and collapsed.

He was taken to his bedchamber where, after days of agony, he fell into a coma and died. Scholars still debate his cause of death, with theories ranging from malaria to alcohol poisoning or being intentionally poisoned by a rival. But by far the greatest mystery, was what happened to his body after death.

Many ancient writers have recorded valuable information about the life (and death) of Alexander the Great, including ancient historians Hesiod, Plutarch, Herodotus, Kourtios, Diodorus and Arianos.

According to Herodotus, Strabo and Stobaeus, the tradition in Babylon at the time of Alexander’s death, was for the dead to be buried in a casing of honey or wax, leading to speculation that the body of Alexander the Great may have undergone the same rites.

Historians have recorded that Alexander’s Generals were fighting for two years over whom would take his body and what would be done with it. Some wanted his body to be buried in Macedonia, but Ptolemy, who was very close to Alexander, wanted it to be buried in Egypt (he had been, after all, the previous pharaoh of Egypt).

During these two years, it was said that Alexander’s body was embalmed and a golden chariot was built to transfer his body. Two years later, the march from Babylon at the sanctuary of Amun began, which was in accordance with Alexander’s own wishes.

The chariot was followed by military guards and soldiers who opened the path for the great procession. However, according to Greek historian, Diodorus Siculus (1st century BC), when on the border between Syria and Egypt, the procession was met by Ptolemy, who “stole” the body and transferred it to Alexandria.

While the actual location of Alexander’s final resting place remained a mystery for over two millennia, we do know that several important figures visited Alexander’s tomb.

In 199 AD, Alexander’s tomb was sealed up by Roman Emperor, Septimius Severus, in Alexandria. Later on in 215 AD some items from his tomb were apparently relocated. And then in 1491 AD, we can find reference to authors such as Leo the African and Al-Masudi visiting Alexandria and gazing upon the remarkable tomb of Alexander the Great.

There is, therefore, substantial references to the tomb of Alexander being located in Egypt. Indeed, Alexander had strong connections with Egypt – he had been crowned Pharaoh in Memphis, after he defeated the Persian Emperor Darius and liberated Egypt from the Persian army.

Unearthing the Tomb of Alexander the Great

Liana Souvaltzi, Greek archaeologist and member of the Egyptian Expeditionary Society of London, who has specialized in the history of Alexander the Great, supported the hypothesis that General Ptolemy fulfilled Alexander’s wish for his body to be buried in the well-known temple of the supreme Egyptian god Amun Ra, in the Oasis of Siwa.

Alexander believed that he was the son of Zeus (Zeus-Amun = Amun Ra), a theory that was later ‘confirmed’ to him by the Oracle of Amun at Siwa.

According to Alexander’s court historians, a verification from this Oracle was given to Alexander that he was the son of Zeus, and at the same time the legitimate Pharaoh of Egypt.

However, according to Greek historian Plutarch (46 – 120 AD), the prophet of the Oracle tried to talk in Greek, and his words were misheard as referring to Alexander as the son of God – something that was misused for political reasons.

In any case, Alexander’s visit to the Oracle of Amun at Siwa had a great impact upon him and it is for this reason that Ms Souvaltzi proposed that the Oasis of Siwa may have been chosen as the location of his tomb. 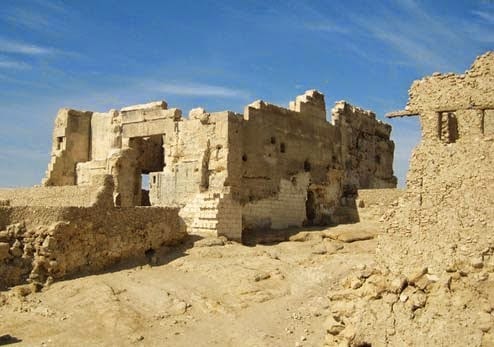 Famous Oracle and Temple of Amun at the Siwa Oasis.
Visited by Alexander the Great. Image ref.

In 1984, Ms Souvaltzi applied to the Egyptian authorities for permission to excavate the area of the Siwa Oasis, located between the Qattara Depression and the Egyptian Sand Sea in the Libyan Desert, nearly 50 km east of the Libyan border, and 560 km from Cairo. In 1989, five years after the application had been submitted, permission was granted and excavations began.

After only one week of excavations, Ms Souvaltzi and the archaeological team made a spectacular discovery – they found an entranceway, guarded by lion statues, to what appeared to be a very large and important monument.

Over the next several years, the excavations revealed that the monument was a magnificent 525 square meter Hellenistic royal tomb.

A diagram of the tomb made by architect Praxiteli Xalepa

In addition to the lions in the entranceway, the archaeological team unearthed numerous lion heads throughout the underground structure – a reflection of the important status of the owner, as well as Greek-style decorations, Greek inscriptions, and a carved relief with the symbol of Amun Ra, all of which pointed to the tomb belonging to Alexander the Great.

One of the inscriptions, which Ms Souvaltzi believes was written by Ptolemy, refers to the elaborate transportation of the body to that tomb, though there is no reference to any names. 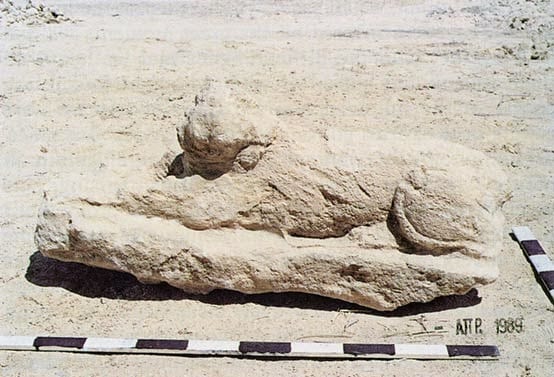 One of the lions discovered inside the tomb 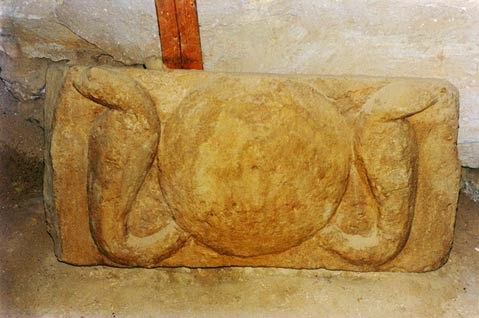 The Symbol of Amon Ra found in the excavations

In 1995, an international announcement was made about the discovery, and just as we see now with the tomb in Amphipolis, there was great excitement throughout the world, and particularly in Greece, that finally the tomb of Alexander the Great had been found.

By this stage, archaeologists had excavated as far as the final burial chamber, but had not yet entered it. 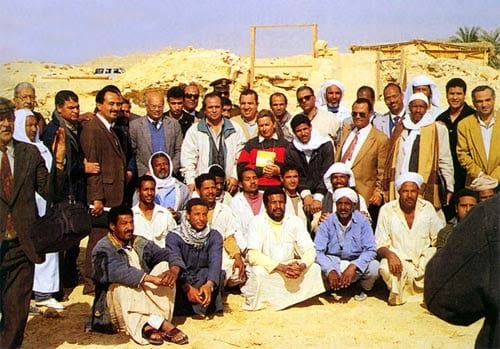 Photo of the archaeological team released at the time of the
international announcement on the 29th of January, 1995

While there was great excitement, the announcement also caused huge political disturbances. The breakup of Yugoslavia had only recently taken place and heated debates had ensued after a federal unit of the Socialist Federal Republic of Yugoslavia tried to name itself the ‘Republic of Macedonia’, when ‘Macedonia’ had been the name of the northern part of Greece for thousands of years.

They were tense times and the Greek Government was concerned with the heightened nationalism spurred on by the discovery of the tomb believed to belong to Alexander the Great, a Macedonian.

As a result, the Greek Government called a stop to the excavations through direct ‘diplomatic intervention’. The then Prime Minister, Costas Simitis, sent an advisor of the Greek Embassy to ask the Egyptian government to withdraw Ms Souvaltzi’s permission to excavate and to prevent any further excavations of the tomb.

The Egyptian government immediately informed Ms Souvaltzi about this intervention, telling her that it was the first time that something like this had happened, where they had been requested to pull the plug on the excavations of such an important monument.

They told her that if she wanted to continue, she would need to resolve it with the Greek government. Ms Souvaltzi contacted Mr Pagalos, a Minister in the Greek Government, who explained to her that the discovery of Alexander’s tomb would increase nationalism in Greece, which was not desired at that time.

When the new Greek government replaced the old one, she tried again to move the blockage and reinstate the excavations permit. However, every effort was blocked at the highest levels.

In a recent interview on a Greek TV channel, Leana Souvaltzi mentioned that while in Egypt, an Israeli ambassador visited the tomb in the Oasis, accompanied by a team of scientists.

The ambassador admitted to her that it was a very big discovery but that it would change the political situation in Egypt and disrupt the balances between a number of other countries. The ambassador told her that, while she had the courage to fight for the truth, sometimes when you expose the truth, you pay for it. 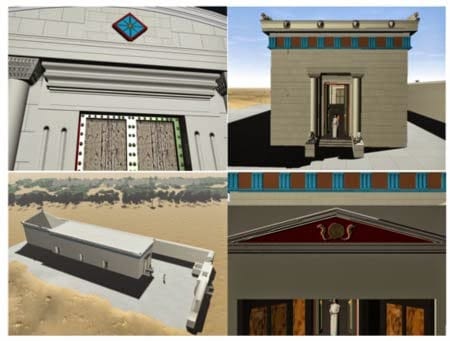 3D reconstructions of what the tomb would have once looked like

Twenty years after her incredible discovery, Ms Souvaltzi still fights for the permission to continue her excavations.  She has devoted her life and invested her personal money into this project and expressed deep concern regarding the preservation of the monument, which would have since suffered extensive erosion.

Today, the magnificent tomb believed to belong to Alexander the Great sits in the Oasis of Siwa guarded by the Egyptian authorities. No one goes in and, for the time being, no one has permission to enter the final chamber, which could solve, once and for all, one of the greatest mysteries of the ancient world.

Featured Image: The corridor leading to the tomb in Oasis Siwa. All other Images are sourced from the official site of Leana Souvaltzi.

1. The Greek Inscription in the Tomb number 13 at Deheba – Academia.edu;
2. Roisman, Joseph; Worthington, Ian (2010). A Companion to Ancient Macedonia. John Wiley & Sons. ISBN 1-4051-7936-8.
3. Wikipedia – Alexander the Great;
4. Official site of archaeologist Leana Souvaltzi;
5. Alexander’s Burial and the Adventure of his Remains;
6. Why isn’t the tomb of Alexander the Great in Amphipolis;
7. Alexander the Great – From Greece to Egypt (Greek);

Are You Too Harsh on Yourself? Then Read This... Previous post
Have You Drugged Your Kid Today? Next post