Hollow Earth: the Forbidden Land of Agartha and the Thule Secret Society

In 1943, German Navy Grand Admiral Karl Doenitz stated that the German submarine fleet had “built for the Führer an impregnable fortress at the other end of the world,” in the region of Queen Maude’s Land, Antarctica, later renamed Neuschwabenland.

According to German naval archives, two months after Germany surrendered to the Allies in April, 1945, the German submarine U-530 left the Port of Kiel bound for Antarctica.

Once the submarine arrived at the South Pole, 16 members of its crew were ordered to construct an ice cave in the region of Neuschwabenland. The German U-boat then entered the Argentinean port of Mar-del-Plata and surrendered to authorities.

In August, 1945, one month and seven days after the surrender of U-530, U-977 also entered the waters of Mar-del-Plata and surrendered to authorities.

In 1946, Operation Highjump commenced as part of the U.S. Naval Antarctic Developments Project, organized by Secretary of the Navy James Forrestal.

The task force consisted of over 40 ships, including two destroyer class vessels and the aircraft carrier the U.S.S. Philippine Sea, and a number of planes that were outfitted with a trimetricon (a secret spying camera), a magnetometer (to record any magnetic anomalies), and the recently developed jet-assist takeoff bottles (JATO) which helped with takeoffs from the short runway on an aircraft carrier or for takeoffs on hard ice.

It has been long thought by researchers that the Navy’s mapping story was nothing more than a cover to shield the real operation.

They were looking for the underground Nazi base (Base-211) that warehoused German Vril flying discs known as flugscheiben and Thule mercury-powered spaceship prototypes also known as jenseitsflugmaschines.

“the project was necessary for the USA to take defensive actions against enemy fighters which come from the polar regions.”

Was he referring to potential Soviet aircraft or Nazi Luftwaffe attacking the States from Antarctica?  He never clarified.

“US measures in Antarctica testify that American military circles are seeking to subject the Polar Regions to control and create permanent bases for their armed forces.”

In another odd twist, the governments of New Zealand, Australia and Chile asked for their militaries to join the Operation Highjump expedition but were denied participation.

In 1948, a second task force named Operation Windmill was also sent to take photographs of Neuschwabenland, again supposedly for mapping purposes. Although they apparently succeeded in their task, the government has yet to make these photos available to the public and no reason has ever been given for their nondisclosure. 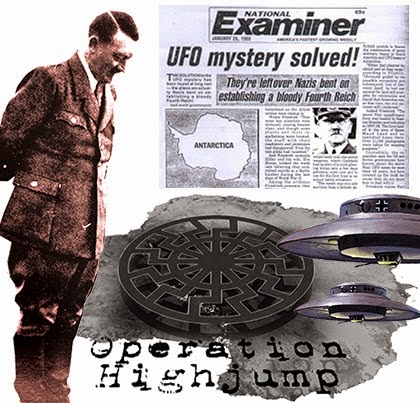 Some believe that the reason the photos have never been released is that this military operation was actually a reconnaissance and recovery mission.

In 1949 Secretary of Defense James Forrestal, a close friend of Admiral Byrd, was sent to stay at Bethesda Naval Hospital.

He began to discuss Operation Highjump with the hospital staff, talking wildly about UFOs, Atlantis, and an underground Nazi city. He was denied visitors, including his wife, and shortly afterwards “fell” out of his hospital window to his death. 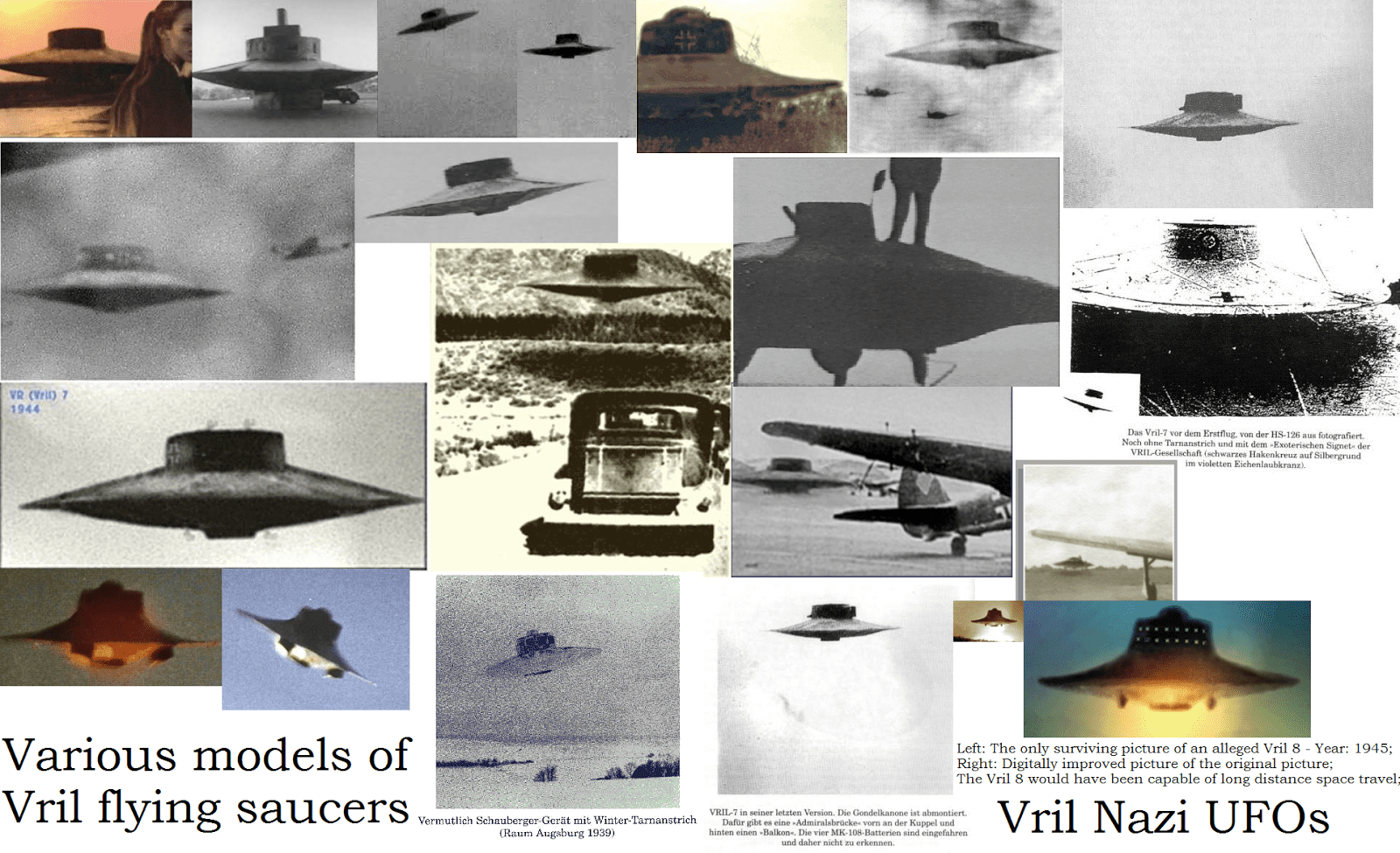 The official report said that he committed suicide but persistent rumors say that he was murdered by government agents to keep him from talking further about what was really found in the Antarctica wilderness during Operation Highjump.

The entire truth of the matter may never come to light, but what is known is that numerous U.S. military personnel surprisingly lost their lives during Operation Highjump; a supposed mapping operation that should have been an entirely safe endeavor.

Also, multiple planes were downed during the operation, including the George One which, according to Naval documents, mysteriously “just blew up” over the ice during its initial flight in Antarctica.

According to British Intelligence, we know that advanced, stealth foo fighters and Vril flying saucer-shaped craft were developed and tested at the German Institute for Aerial Development. 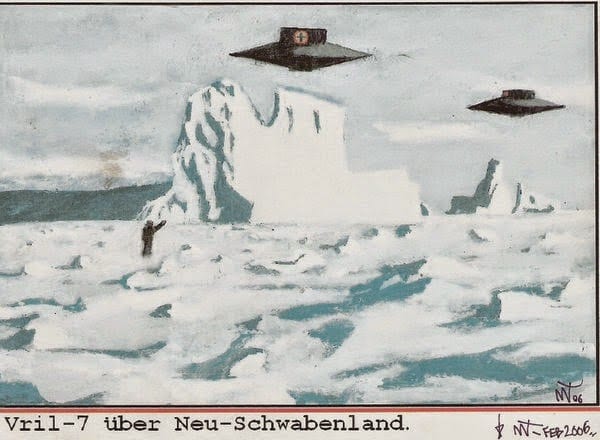 Another motive associated with Nazi involvement in Antarctica is that it was rumored to be the entrance to the lost Aryan homeland of Thule. While Antarctica has been linked to the lost continent of Atlantis, the linkage to Thule is less apparent.

Thule (also known as Thula, Thyle, Thila, Tila, Tyle, or Tylen, among other cognates) was first written about by the Greek explorer Pytheas after his travels between 330 BC and 320 BC.

In 150 AD, Greek writer Antonius Diogenes wrote The Wonders Beyond Thule. While of literary interest, this work did little to reveal any secrets about Thule.

In medieval geographies Thule was referred to as distant place located beyond the “borders of the known world.” Occult mystics believe in historical Thule (also referred to as Hyperborea) as the ancient origin of the Aryan race.

Just what was the US military doing in Antarctica in 1946 and 1947? Were they on a routine mapping mission or were they engaging remnant Nazi fighters with advanced alternative technology?

Did the Nazis truly build a military base in the Antarctic or hide vast amounts of gold there in hopes of funding a future effort to resurrect the Fourth Reich? Or did they, as some claim, discover the lost land of Atlantis or Thule?

We may never know for sure, but in 2001 the U.S. National Geospatial-Intelligence Agency and the Support Office for Aero-geophysical Research confirmed the existence of a magnetic anomaly on the eastside shore of Lake Vostok in Antarctica, consistent with a man-made construct.

More recently, in October 2006, the Scripps Institute of Oceanography reported that they discovered several previously unknown lakes of water underneath the vast ice sheet of Antarctica. These lakes lie beneath 2,300 feet of compressed snow and ice.

Could this anomaly be part of an underground Nazi base that U.S. agents searched for during Operation Highjump? Something has indeed been discovered in Antarctica. One of the questions that begs to be asked is did the Nazis find, whatever it is, first?

A book published in 1978, called Secret Nazi Polar Expeditions, relates how the Germans had taken a ship with a small airplane on it that they launched from their ship after reaching the ice near Antarctica.

It flew over the ice to Antarctica, presumably on a scouting flight, and then back to the ship. But the book didn’t say anything about what it supposedly found or what the Nazi party elite believed was an entrance to the inner (hollow) earth.

An interesting document has recently surfaced obtained by a Joe Watson of Talkeetna, Alaska.

Mr. Watson claims it is a copy of a letter written on 2 March 1985 in the German language from a German submarine crewman who was on board. In it is given certain coordinates for their mission, which apparently was to travel to the center of the earth.

Their submarine was called U-209 under Captain Heinrich Brodda. The image below is a copy of the original hand-written letter from Karl Unger, crew member of the German U-209, as well as an English translation (click to enlarge).

In it Karl confirmed that the earth was indeed hollow and that they had successfully reached the inner inhabited earth in the German U-209 submarine after World War II had destroyed Germany. 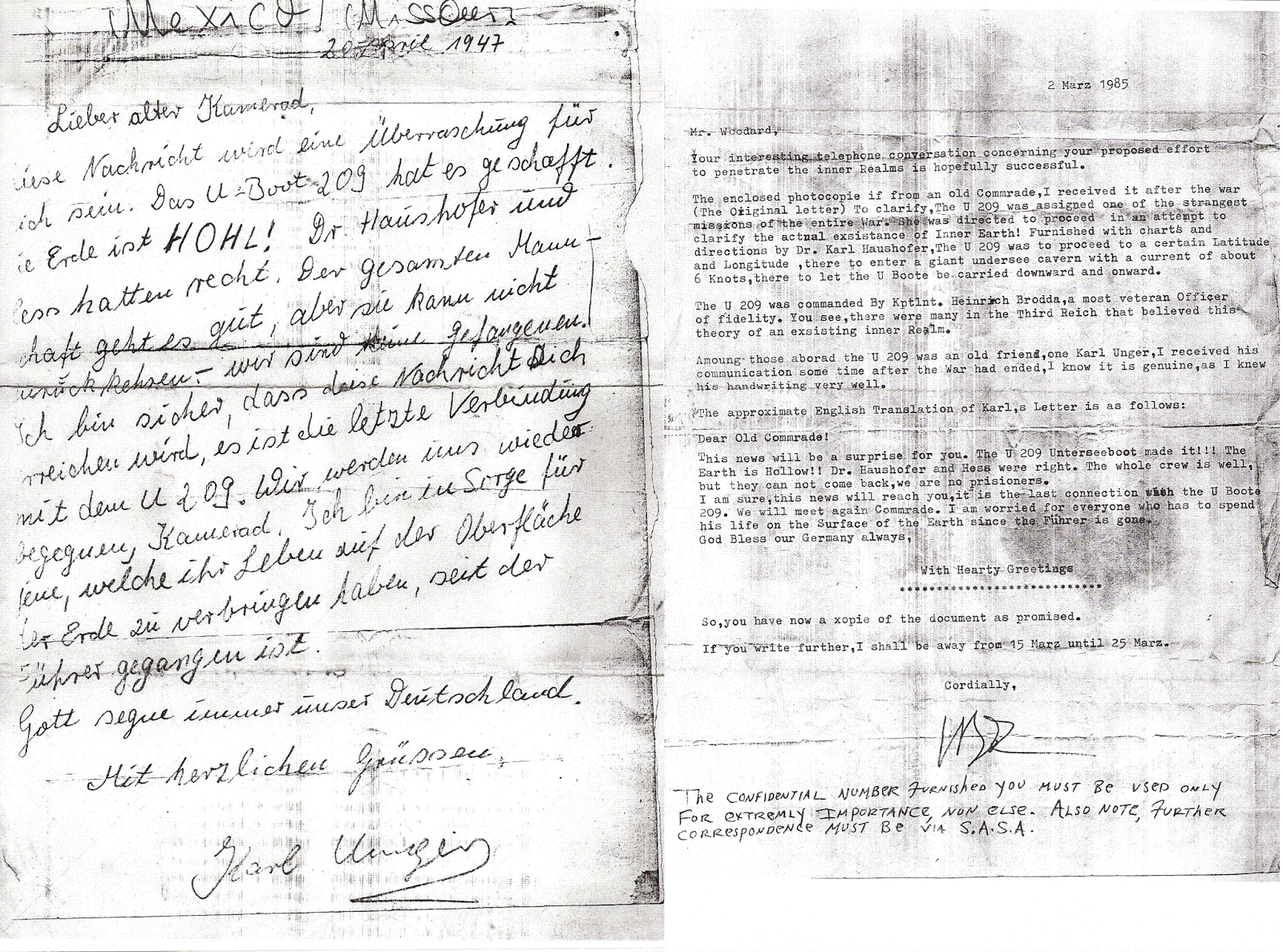 This German colony in Brazil is documented in Genesis For a New Age, having supposedly discovered the cavern entrance back in the 1500’s. When one does a search at the German archive website looking for information on the missing U-209 German submarine, it shows that the submarine was indeed reported missing.

On July 5, 1943 was it’s last reported position between Greenland and Iceland at coordinates 52°00’N-38°00’W.  The report said the Commander of the submarine was Heinrich Brodda.

In addition, documents obtained by the soviets at the close of WW2 recently surfaced which shows a 1944 map from the Third Reich detailing not only the direct passageway used by German U-boats to access this subterranean domain, but also a complete map of both hemispheres of the inner realm of Agharta, the mythical name of the inhabited subterranean world (click image to enlarge).

If that seems too unbelievable, compare with those maps, this map done by the famed Tyrolean cartographer and artist Heinrich C. Berann for the National Geographic Society beginning in 1966.

The following map clearly shows the continent of Antarctica without its cover of ice: 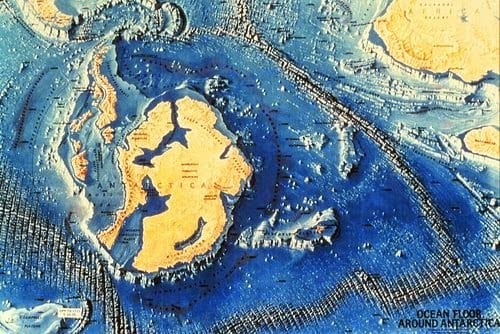 The intriguing detail here is that there are underwater passageways that run nearly the entire length of the continent and seem to converge at the exact location identified as the opening into the deep inner or subterranean earth.

Below is a translation of the Top Secret instructions and specific detailed directions left for the Nazi U-boat Captains to follow in order to reach the inner-world kingdom of Agartha (click to enlarge).

In his groundbreaking bestseller Map of the Ancient Sea Kings, Charles Hapgood (1904-1982), History Professor at Springfield College in Springfield, Massachusetts, first put forth the theory that Atlantis resided in Antarctica and was destroyed by crustal displacement.

In his bestseller, When The Sky Fell: In Search of Atlantis, Rand furthered this idea that under the ice of Antarctica exists the remains of Atlantis. Could they be right?

Related and absolute must-read: ETs and the Vril Technology — Nazi Bases on the Moon.

Graham Hancock: A Mysterious Ancient Pyramid in Indonesia is Rewriting History Previous post
This is What Happens When the Police Goes on Strike Next post