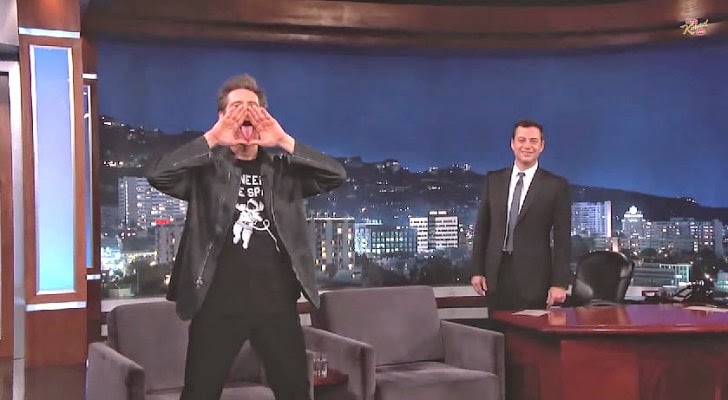 Jim Carrey Takes on the Illuminati: ‘I’m Sick and Tired of the Secrets and the Lies’

Jim Carrey is a well-known jokester. By now, his kooky public antics have come to be expected from the 52 year old Canadian-born actor.

In his latest public appearance, seen November 14th on the Jimmy Kimmel show, Carrey decided to let the viewers in on some big secrets, the inner-Hollywood workings of the Illuminati.

In a grand entrance, Carrey comes forward on Kimmel’s stage making an obvious and in-your-face hand gesture, as seen in the image above.

The crowd screamed and applauded with jubilance, and it was unclear whether they were screaming because they aware of the hand symbol he was making, or whether they were simply excited to see the actor after a short stint away from Hollywood in recent years. 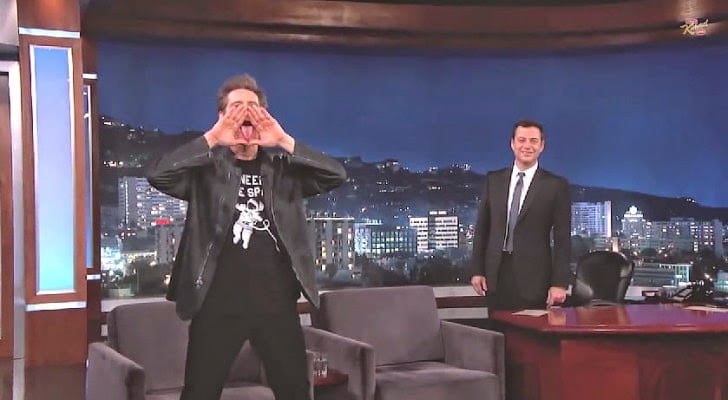 In the video (seen below), Carrey spends an extended period of time making the triangle hand symbol while protruding his tongue from the center, while a curious but humored Kimmel watches from behind at his desk.

The audience finally calms down after Carrey takes a seat at Kimmel’s desk, after which Kimmel asks, “What Is that exactly? Is that a gang sign?”

Carrey shoots Kimmel a look of surprise, “Oh like you don’t know what it is,” he jokes. Kimmel answers “No I don’t.”

For those who aren’t sure what Carrey is referencing, the triangle with a symbol in the middle (typically an eye) represents the Illuminati, a hidden governing force which has ties in all of today’s biggest industries, including financial, entertainment, military, and religious.

Illuminati references have become ubiquitous throughout Hollywood, as seen in a number of films, television shows, music videos, and even live performances.

After Kimmel continues to deny knowing what Carrey is doing, Carrey finally reveals,

“Come on Jimmy, I’m here to blow the whistle off of this whole thing. I’m sick and tired of the secrets and the lies, it’s the secret symbol of the Illumi-nutty, and you’re a part of it. It’s the all mocking tongue.” Carrey boasts to a laughing audience.

“Carrey goes on to explain (with a not-so-serious undertone) how many people in the entertainment industry have been hired by the government to distract the masses by making us happy and docile, so that we don’t know what’s really going on. Carrey also adds that they decide these things “out in the woods in a circle, naked.”

Next he reveals that the Illuminati is trying to turn the masses into “consumer drones,” after which he receives a fake phone call which he answers. We watch as his face immediately turns serious, and a curious Kimmel asks who it was.

Carrey is now zombie-like, and turns to Jimmy explaining, “I’m sor-ry, Jimmy, I-was tempor-arily inter-rupted by my iPhone 6+, with HD display,” the audience erupts in laughter and cheers.

The segment ends with an original plug for his new film, Dumb and Dumber To, leaving the audience thoroughly entertained.

Was There Truth Behind Carrey’s Extended ‘Joke’?


Although there was an apparent undertone of humor to Carrey’s stunt, many of the things he mentioned are in fact based in truth.

The term ‘Illuminati’ comes with connotations of conspiracy, however, the term simply refers to the high-level bankers who own a large majority of our world. The Rothschilds and Rockefellers, to name a few. 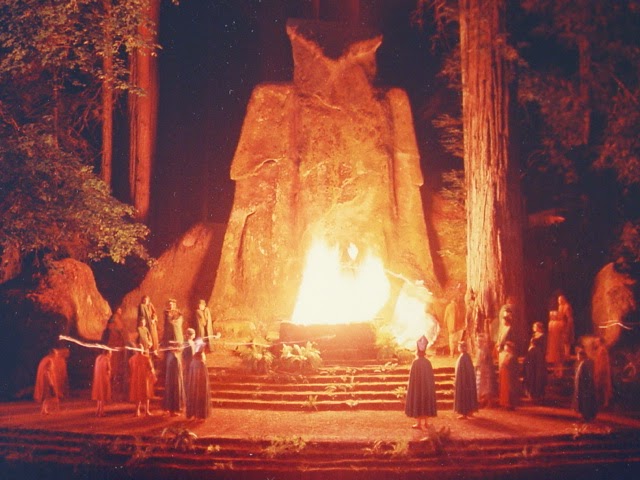 Bohemian Grove; every year a group of men involved with high levels
of politics and finance meet in secrecy in a remote area of California.
Jim Carrey references this in his appearance on Jimmy Kimmel. 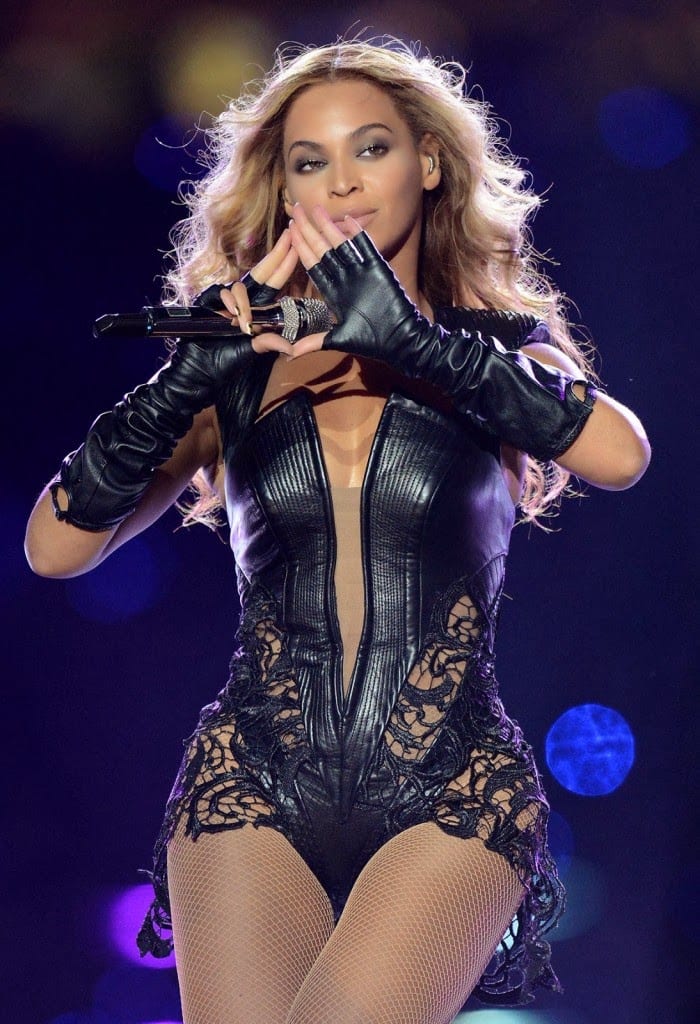 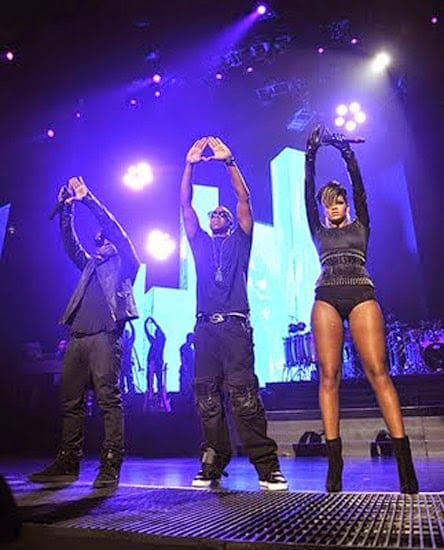 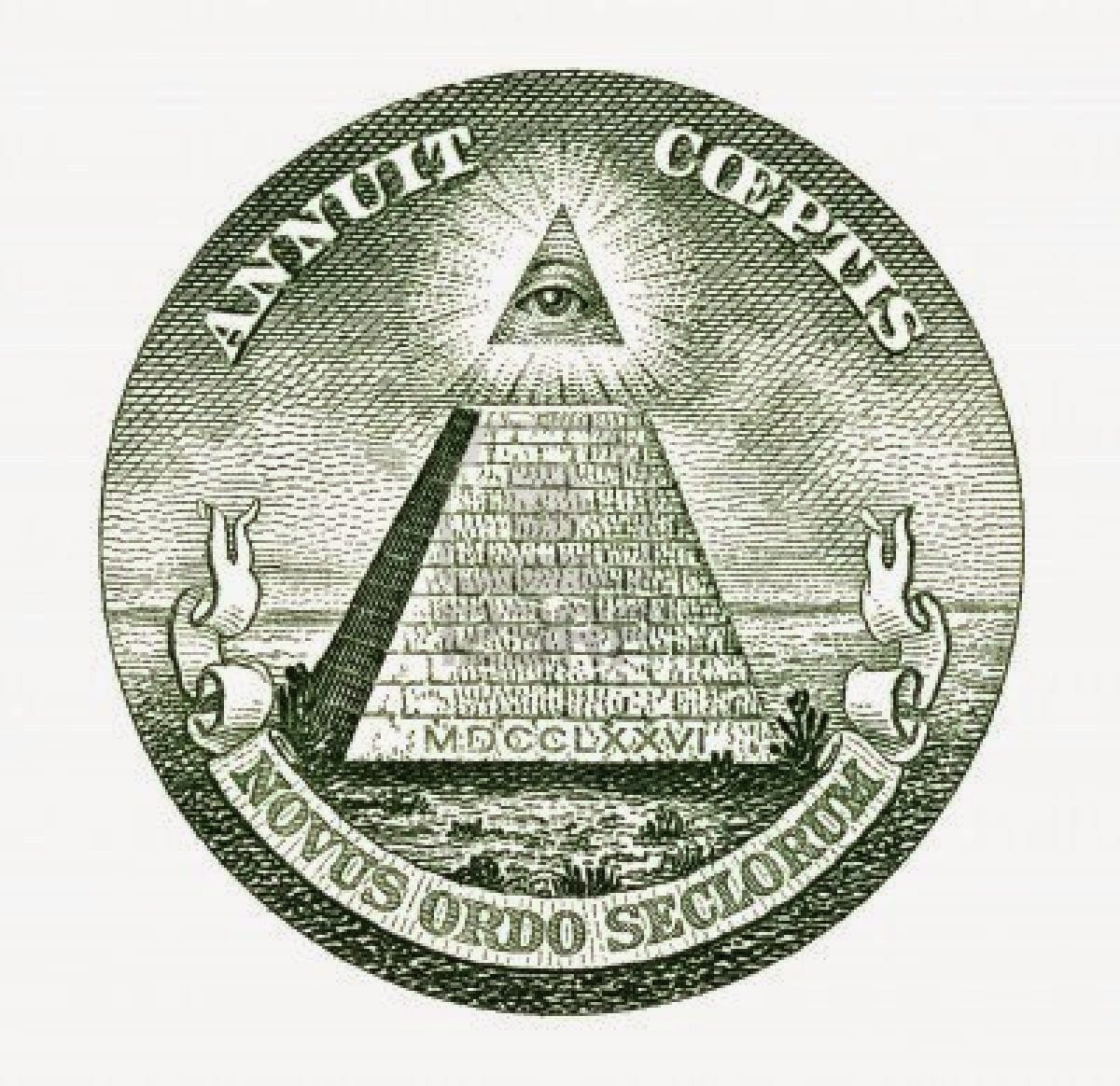 The triangle and all seeing eye as seen on the American dollar bill.

Like mentioned before, these families have ties to practically every industry that exists today, including Hollywood. The origins of these families are also connected to esoteric occult organizations, such as Freemasonry.

This is where occult symbolism, such as the triangle and all seeing eye, comes into fruition. The theory states that many Hollywood hopefuls display these symbols, which are hidden in plain sight, in order to show their allegiance to the ‘global elite’ and to better themselves within the industry.

One could argue that Carrey was poking fun at the Illuminati conspirists, however, considering Carrey is known for being publicly involved in the ‘truth movement’, one must naturally question if this public appearance was a planned tactic to spread awareness about the global elite.

With a platform as wide-reaching as the Jimmy Kimmel show,  it would definitely be a perfect opportunity to do so.


By Jeff Roberts, Collective Evolution;
Prescription Drug Vending Machines: In a College Near You Previous post
The War Within: Escape the Temporal Illusory Holographic Matrix Next post