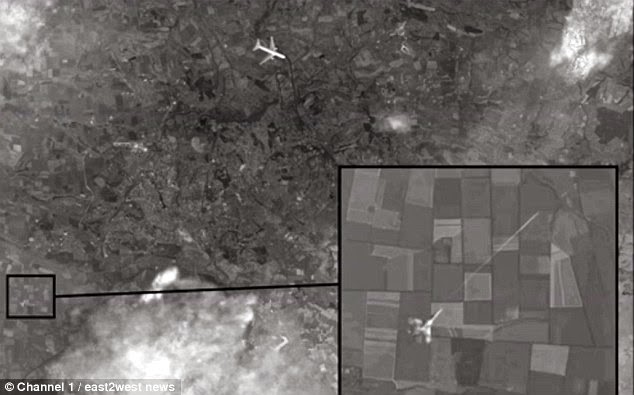 Russian experts have claimed Malaysian Boeing MH17 was shot down by a Ukrainian warplane and not a ground to air missile.

This follows the release of ‘leaked’ satellite images which show a missile streaking towards the passenger plane, produced tonight by Russia’s main state broadcaster.

It was claimed that the space pictures were from a British or US satellite. […]

TV presenter Mikhail Leontiev claimed that the mysterious source who provided the images concluded they showed ‘how a Mig-29 fighter plane destroys the Boeing passenger plane’. 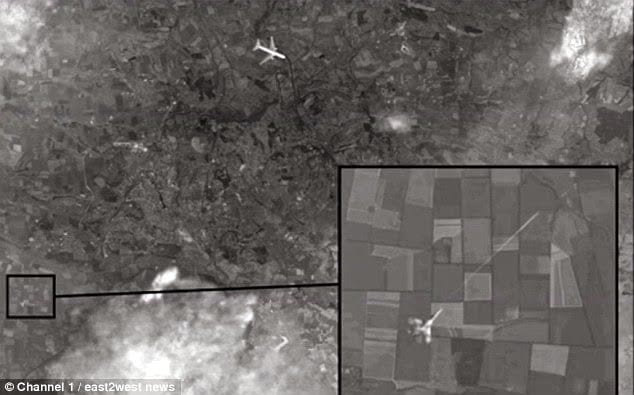 The West has repeatedly suggested the plane was shot down by pro-Moscow rebels using a Russian-made BUK missile system.

Russia has argued an unidentified plane was in vicinity at the time of the crash, and that Ukraine and the West have hushed up this fact. 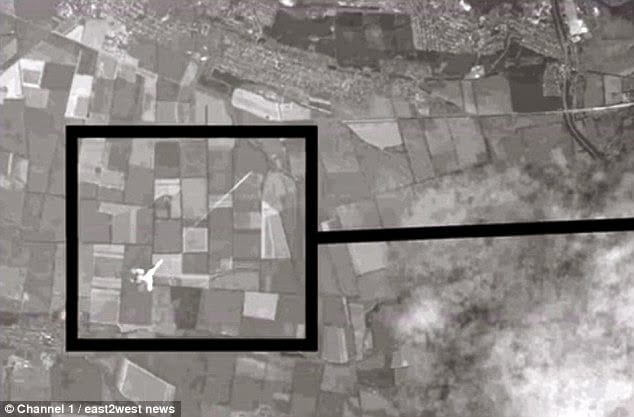 ‘Today we have all grounds to suppose that a State crime was committed by those who deliberately destroyed the plane. And by those who are cynically hiding it, having the full information.’

The extraordinary broadcast came ahead of Western leaders including David Cameron confronting Vladimir Putin over the crash at a summit in Australia.

‘We have at our disposal a sensational shot, supposedly made by foreign satellite spy during the final seconds of MH17 above Ukraine.’ 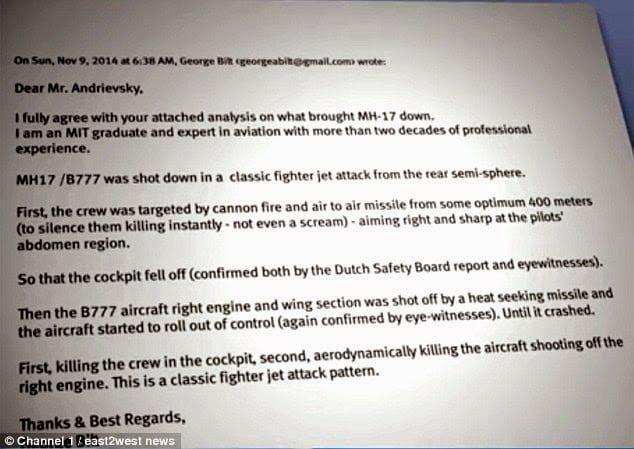 The reported disputed a BUK missile as the cause of the tragedy.

‘To cut it short, it looks like there was no BUK and no launch from the ground. There were dozens professional and thousands of amateur witnesses, and no-one registered it,’ claimed Leontiev.

‘We see a photograph taken from space from a low orbit. Usually such images are taken for the sake of general reconnaissance of the air and the ground.

‘The coordinates of the photograph mean we can suppose that the image was taken by an American or British satellite. We have studied this picture in detail and did not find any sign proving it to be fake.’

An ‘expert’ called George Bilt was cited as saying the Boeing was shot out of the sky in ‘a classic fighter jet attack from the rear’.

Related, the Corbett Report: You Won’t Believe the Shocking Truth About the Ukraine False Flag;

Vladimir Putin accused the Ukrainians of ‘constantly shelling’ the MH17 crash site earlier this week amid steeply rising concern in the West that he has ordered massive military reinforcements to bolster pro-Moscow rebel forces.

At least 21 trucks, six tanks and 14 howitzer cannons were seen driving through rebel-territory to Donetsk, while residents reported a convoy of 12 unmarked military trucks.

By Will Stewart, Daily Mail;

Police Have Stolen Billions Worth of Property from Citizens Without Charge Previous post
Immoral Science: A Scientist’s Plea for World Peace Next post