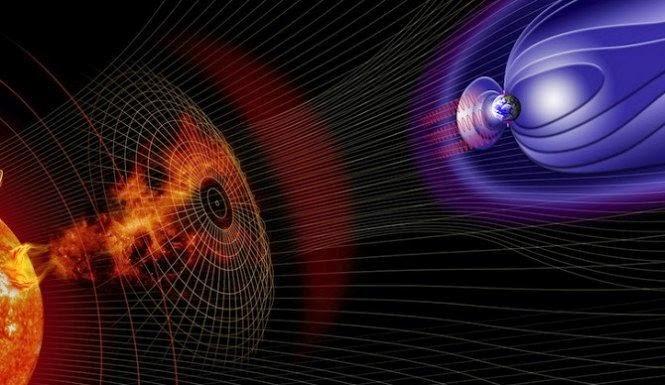 NASA recently discovered what appears to be a ‘force field’ over Earth, fueling the fire over whether our planet has been under spiritual and physical quarantine as many have suggested.

According to Daniel Baker, director of the Laboratory for Atmospheric and Space Physics, the electron barrier exists in the Van Allen belts, a pair of donut-shaped belts that ring the Earth teeming with protons and electrons.

The Earth’s magnetic field holds the belts in place, but the scientist says that the electrons in these belts – which travel at nearly the speed of light – are being blocked by some invisible force that reminded him of the kind of shields used in television series like Star Trek to stop alien energy weapons from vaporizing starships.

This newly found force field appears to be unrelated to the clouds of cold plasma that were discovered over earth in 2012, as mentioned by National Geographic. 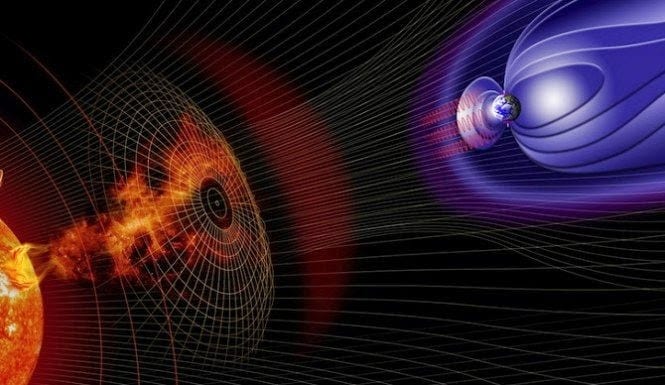 Many have speculated that there have been no landings on the moon due to a combination of this quarantine along with the radiation found in the Van Allen Belt.

Numerous philosophers and spiritual teachers have spoken about the quarantine.

Michael Tsarion talks about the quarantine and its association to the moon in the Stargate and Quarantine chapter of his book, Atlantis, Alien Visitation and Genetic Manipulation:

“When the original pursuers of the “Serpent Brotherhood” destroyed the planet Tiamat, they made ready to leave this solar system and return to their own. They had to leave in a hurry, so as not to be hindered by the cosmic forces which would be unleashed throughout the solar system. Because of their haste, they did not have time to precisely scan the planet Earth, and so they did not locate their enemies hidden deep within the caverns and beneath the seas of pre-diluvian Earth.

“The masters of the Nephilim were relatively convinced that even if their enemies were on Earth they could not survive the paroxysms and furor that Tiamat’s obliteration would bring on. However, these unknown pursuers did not just leave our solar system without instigating precautionary measures. Before they made the journey back to their own planet, they established an etheric barrier around our planet that would be along the same orbit trajectory as the Moon’s around the Earth.

“This barrier still exists and is utterly impenetrable to the Atlantean progeny, because the technology by which it was erected was of an extremely advanced level. From that time onwards, the Moon would come to represent (in almost all cultures) arcane powers of protection and magic.

“This apotropaic barrier, often referred to as by native peoples as the “the great web in the sky,” was put there obviously to prevent the Atlanteans from ever leaving this place. The Earth was to be their tomb.”


Ashayana Deane believes the quarantine not only involves the veil of forgetfulness but also to disassociate ourselves from our divine spiritual heritage as being part of multidimensional universes of higher-conscious forms.

According to the Wes Penre papers, our planet has been under quarantine since the arrival of the Anunnaki:

“By giving himself the rank of King, and his refusal to give his obedience to the Kingdom in general, made the Nibiruan Council decide to put Marduk in the equivalent to quarantine here on Earth.

“What this means, exactly, is not known to me, and I haven’t yet been able to find out. Does it mean that Marduk is not allowed to leave Earth (which has been vaguely indicated to me), or is the picture bigger than that, something to the effect of what Robert Morning Sky wrote in The Terra Papers?

“According to Morning Sky’s research, and from what the Star Elder told him, the whole Earth was put under quarantine, and humans, too, are not allowed or able to travel very far out in space. The Pleiadians, on the other hand, just like David Icke, are talking about a frequency quarantine (as mentioned earlier), where our DNA was tampered with to the extent that we have been stuck in this 3-D frequency range for pretty much 300,000 years.

“A similar thing is brought up in the Ra Material, where the Ra people are telling us we are put under quarantine by the Council of Saturn, which pretty neatly corresponds to the Nibiruan Council.”

David Icke talks about the Earth being in a vibratory prison in his book, And the Truth Shall Set You Free:

“We will use the term blocking and jamming frequencies for simplicity, but our vibratory imprisonment could well have taken the form of closing down the portals and gateways (Earth-vortexes) which link the physical-plane with other space-time dimensions. Some of these gateways are still to be found, however, at certain sacred places used by the ancients, like Stonehenge, Machu Picchu in Peru, Ayers Rock in Australia, and the former lands of Babylon and Mesopotamia, now Iraq.

“The Bermuda triangle is another, which would explain the many strange disappearances of ships and aircraft, as the gateway opens. It may even be that these gateways were largely closed down for positive reasons, to prevent more negative ETs from entering this space-time reality. Jamming frequency, closing the dimensional gateways, probably both – the precise cause of the prison does not matter so much.

“All we need to understand is that an extraterrestrial force from the Fourth Dimension created an information prison by blocking off the higher levels of reality. The veil came down; a veil of tears. We were, in effect, put into spiritual and mental quarantine where we remain today.

“Such a jamming vibration thrown around our planet means that mankind’s potential is limited to the levels of consciousness which are within the imprisoning frequency. Any consciousness and knowledge held on higher frequencies outside this vibratory prison has been denied to us. Having consequently become detached from the higher levels of our own being, in the words of the ancient books, we are “fallen” or “lost souls”, disconnected from “the Father”.

“When the blocking, imprisoning frequency was thrown around this planet, we lost touch with our higher consciousness and, crucially, with our eternal memory. We forgot who we were and where we came from. Or, at least, the overwhelming majority did.

“Those who succeeded in raising their vibratory rate of consciousness on Earth could regain contact with their higher mind, their greater self, and these individuals were sometimes said to have become “enlightened”, although the blocking frequency often made such enlightenment a less than perfect connection, even for these accomplished individuals.

“Progressively more people are today successfully penetrating the vibratory prison, however, and they are therefore reconnecting with their greater self outside of the frequency net. This accomplishment is being facilitated as the blocking frequency is being dispersed in line with Divine Order, which is, in turn, responsible for the spiritual and psychic awakenings now evidenced all around the world.

“Yet only very few have been able to do this until recently, while the majority of human-beings have witnessed their vibratory rate fall and remain in check under the influence of events, religions, wars and general programming/conditioning which has encouraged, if not coerced, the race to close down its mind, thereby reducing the vibratory rate of consciousness of the masses.

“This has produced a vibratory gap – for some a chasm – between their lower levels of self inside the blocking frequency and their infinite potential (their greater self) which lies outside that frequency.”

CSETI founder, Dr. Steven Greer, believes there’s a quarantine over the planet because the Earth’s inhabitants are a threat to other forms of life outside of our planet, due to our military aggression all throughout the world:


There have been other people such as Andrew Basiago, who claimed to have teleported to Mars via a “Jump Room,” thus effectively bypassing the force field over planet earth.

If you were an extraterrestrial visiting our planet, what would you think when you see us killing ourselves over money and oil?  Would you wonder why the inhabitant’s air, food, and water supplies are all being poisoned, yet no one really stands up against it?

I’ve said this many times and it’s worth repeating.  If a UFO were to land in your backyard, there are two things the ET would NOT have:  money and a bible.

In order for us to move forward as a global community, we need to come together as one.  Once the bottom of the pyramid unites, the rest will collapse. In order for that to happen, we must all unite and not necessarily put aside any differences, but to honor and respct those differences in one another because that’s what makes us “hue-man”.

[Related: “Humanity acts like a cancer up on the surface of this planet. Our population rises exponentially. We asset strip and pollute our environment. We do not exhibit a symbiotic or balanced harmony with the Earth.” — Continue reading.]