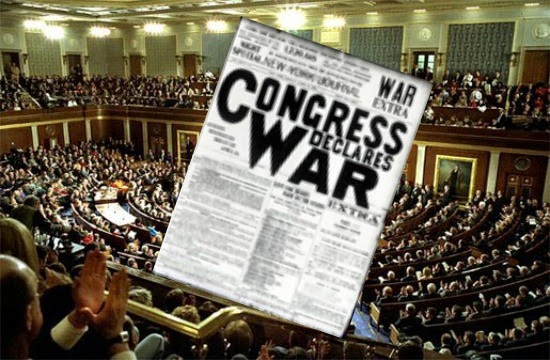 Today the US House passed what I consider to be one of the worst pieces of legislation ever.

H. Res. 758 was billed as a resolution “strongly condemning the actions of the Russian Federation, under President Vladimir Putin, which has carried out a policy of aggression against neighboring countries aimed at political and economic domination.”

In fact, the bill was 16 pages of war propaganda that should have made even neocons blush, if they were capable of such a thing.

These are the kinds of resolutions I have always watched closely in Congress, as what are billed as “harmless” statements of opinion often lead to sanctions and war. I remember in 1998 arguing strongly against the Iraq Liberation Act because, as I said at the time, I knew it would lead to war. 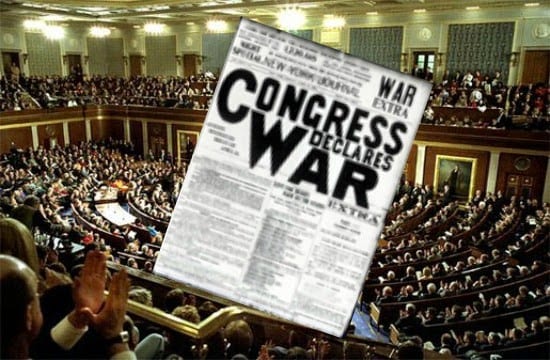 I did not oppose the Act because I was an admirer of Saddam Hussein – just as now I am not an admirer of Putin or any foreign political leader – but rather because I knew then that another war against Iraq would not solve the problems and would probably make things worse. We all know what happened next.

That is why I can hardly believe they are getting away with it again, and this time with even higher stakes: provoking a war with Russia that could result in total destruction!

If anyone thinks I am exaggerating about how bad this resolution really is, let me just offer a few examples from the legislation itself:

The resolution (paragraph 3) accuses Russia of an invasion of Ukraine and condemns Russia’s violation of Ukrainian sovereignty. The statement is offered without any proof of such a thing.

Surely with our sophisticated satellites that can read a license plate from space we should have video and pictures of this Russian invasion. None have been offered.

We have all heard the tapes of State Department officials plotting with the US Ambassador in Ukraine to overthrow the government. We heard US Assistant Secretary of State Victoria Nuland bragging that the US spent $5 billion on regime change in Ukraine. Why is that OK?

The resolution (paragraph 11) accuses the people in east Ukraine of holding “fraudulent and illegal elections” in November.

Why is it that every time elections do not produce the results desired by the US government they are called “illegal” and “fraudulent”? Aren’t the people of eastern Ukraine allowed self-determination? Isn’t that a basic human right?

The resolution (paragraph 13) demands a withdrawal of Russia forces from Ukraine even though the US government has provided no evidence the Russian army was ever in Ukraine. This paragraph also urges the government in Kiev to resume military operations against the eastern regions seeking independence.

The resolution (paragraph 14) states with certainty that the Malaysia Airlines flight 17 that crashed in Ukraine was brought down by a missile “fired by Russian-backed separatist forces in eastern Ukraine.”

Paragraph 16 of the resolution condemns Russia for selling arms to the Assad government in Syria. It does not mention, of course, that those weapons are going to fight ISIS – which we claim is the enemy — while the US weapons supplied to the rebels in Syria have actually found their way into the hands of ISIS!

The resolution (paragraph 22) states that Russia invaded the Republic of Georgia in 2008. This is simply untrue. Even the European Union – no friend of Russia – concluded in its investigation of the events in 2008 that it was Georgia that “started an unjustified war” against Russia not the other way around!

How does Congress get away with such blatant falsehoods? Do Members not even bother to read these resolutions before voting? 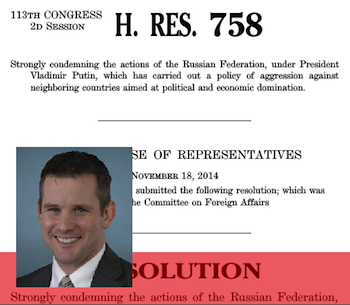 In paragraph 34 the resolution begins to even become comical, condemning the Russians for what it claims are attacks on computer networks of the United States and “illicitly acquiring information” about the US government.

In the aftermath of the Snowden revelations about the level of US spying on the rest of the world, how can the US claim the moral authority to condemn such actions in others?

Chillingly, the resolution singles out Russian state-funded media outlets for attack, claiming that they “distort public opinion.” The US government, of course, spends billions of dollars worldwide to finance and sponsor media outlets including Voice of America and RFE/RL, as well as to subsidize “independent” media in countless counties overseas.

How long before alternative information sources like RT are banned in the United States? This legislation brings us closer to that unhappy day when the government decides the kind of programming we can and cannot consume – and calls such a violation “freedom.”

The resolution gives the green light (paragraph 45) to Ukrainian President Poroshenko to re-start his military assault on the independence-seeking eastern provinces, urging the “disarming of separatist and paramilitary forces in eastern Ukraine.” Such a move will mean many more thousands of dead civilians.

To that end, the resolution directly involves the US government in the conflict by calling on the US president to “provide the government of Ukraine with lethal and non-lethal defense articles, services, and training required to effectively defend its territory and sovereignty.”

This means US weapons in the hands of US-trained military forces engaged in a hot war on the border with Russia. Does that sound at all like a good idea?

There are too many more ridiculous and horrific statements in this legislation to completely discuss. Probably the single most troubling part of this resolution, however, is the statement that “military intervention” by the Russian Federation in Ukraine “poses a threat to international peace and security.”

Such terminology is not an accident: this phrase is the poison pill planted in this legislation from which future, more aggressive resolutions will follow. After all, if we accept that Russia is posing a “threat” to international peace how can such a thing be ignored? These are the slippery slopes that lead to war.

This dangerous legislation passed today, December 4, with only ten (!) votes against! Only ten legislators are concerned over the use of blatant propaganda and falsehoods to push such reckless saber-rattling toward Russia.