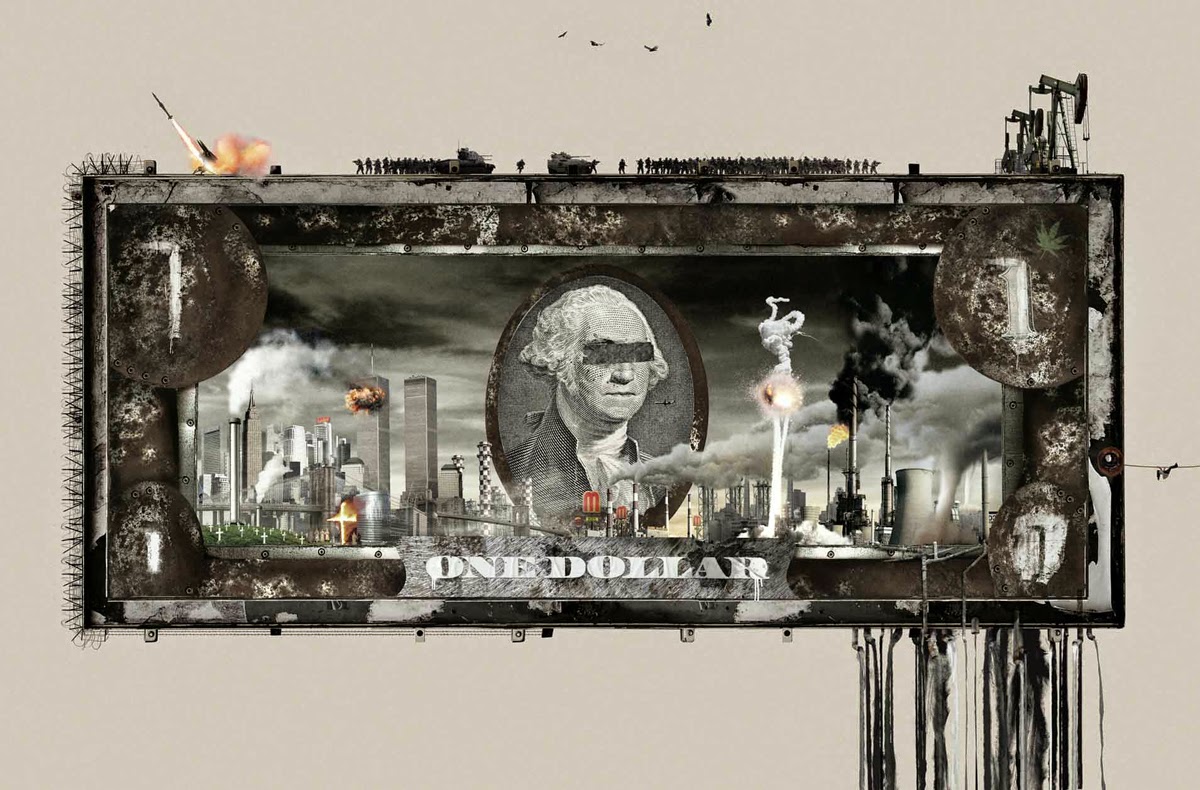 WW3 is All That’s Left to Save the US Economy

Right now, the only reason you have a job to go to, a roof over your head, and food on the table is because of the Federal Reserve.

I have some really bad news, to the people associated with “The end the Fed movement”, our survival depends on the Federal Reserve and the rest of the Western banking establishments to survive in the upcoming months.

No, I have not sold out, but I would suggest reading on and think about taking a “graduate” course in prepping because I am not sure the West can survive what is unfolding. 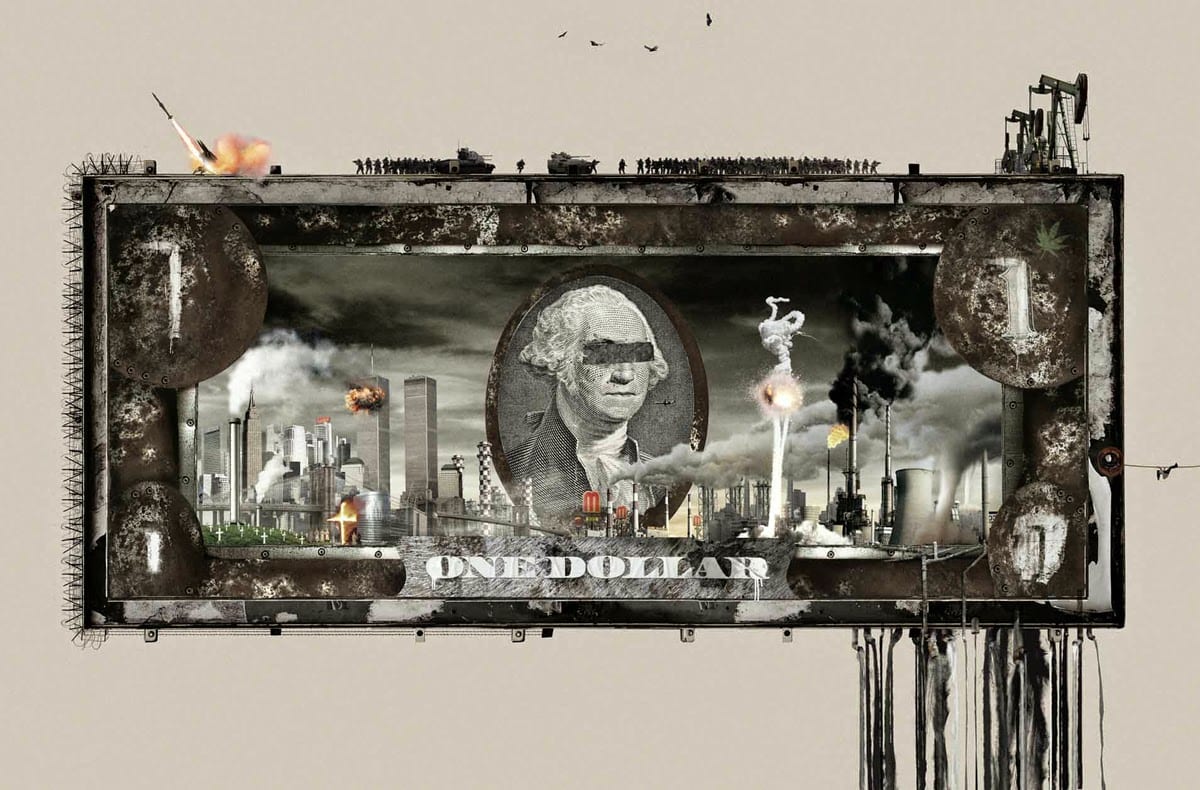 The Birth of the Petrodollar

Before explaining how imperiled our economy is, I have to start at the beginning for people who do not understand the significance of the Petrodollar. The Petrodollar is the baseline of our economy and it is in big trouble.

A novel system for monetary and exchange rates were established in 1944. The Bretton Woods Agreement was developed at the United Nations Monetary and  Financial Conference held in Bretton Woods, New Hampshire, from July 1-22, 1944. This conference established the US dollar as the reserve currency of the world.

The Banksters (e.g. [Rothschilds], Rockefellers’) reveled in their new found fortune. As a result of the Bretton Woods Conference, all nations desiring to purchase Middle East oil had to first purchase dollars and use these dollars to complete the purchase of oil.

Nearly everyone inside of our country benefited from this system. Americans basically enjoyed a stable currency minus the inflation rates of about 5% per year which served as an informal tax that went into the Federal Reserve banksters’ pockets. Thus, the Petrodollar was born.

If the Petrodollar was to ever be successfully undermined, our currency would sink faster than a submarine with screen doors because there is nothing backing up our money.

Put on your life jackets because the ship is sinking fast. The BRICS, led by Russia and China, are growing in influence by leaps and bounds and they are months/years away from being able to effect a collapse of the United States economy.

Since 1944, America has become the most hated nation in the world as we have dominated every single economy on the face of the earth, until now!

The Tables Are Being Turned On the West

The haughtiness of the West as they impose sanctions on Russia over Ukraine is almost laughable. The sanctions are a boomerang in disguise and will come back at us to destroy the American economy which will lead to World War III. 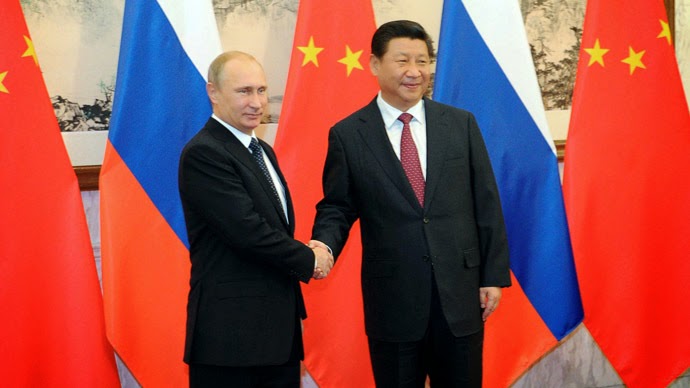 At the heart of the American economy and the Petrodollar is energy and Russia and China just cemented an agreement where they do not need the dollar.

The Russia – China  $400 billion energy deal, signed in May this year will by 2018 have some 38 billion cubic meters of gas flow through the so-called ‘Holy Grail’ pipeline from the largest gas producer, Russia, to the largest energy user, China.

This deal  is many things at once: It is, of course a symbolic step in the process of decoupling hydrocarbon trading from the dollar, as it foresees payments in local currencies, rubles and yuan.

It sidesteps the  Petrodollar for hydrocarbon trading. Over one-third of the planet just moved away from the dollar when this recent deal was cemented.

This one deal spells the end of dollar dominance on the planet. Much of the economic exchange between the two countries will be conducted in gold instead of the dollar.

The BRICS have set up a  new development and investment bank for all of the BRICS countries. The banks  will be headquartered in Shanghai, China, with the first president of the bank will be from India. 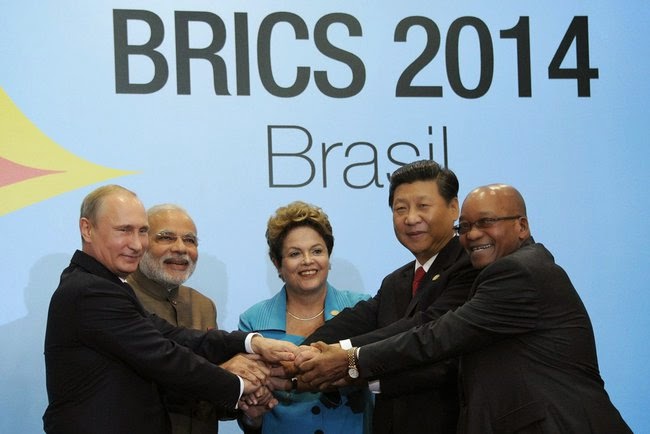 About half of the people of the world are represented in this move away from Western capitalism.

The BRICS nations, of course, are a group of emerging economies and draws its name from the five member countries – Brazil, Russia, India, China and South Africa. BRICS is also considering starting a joint infrastructure fund with an initial capital infusion of around $100 billion to begin investing in each other’s transportation, water and sewage systems.

This formerly would have been funded by the World Bank with its cronies in corporations like Bechtel Corporation who would be swooping in to dominate countries in places like South America to construct infrastructure with interest rates typically reserved for Mafia loans.

The net effect was that these countries (e.g. Bolivian and Chilean water systems) would enslave the governments and the local populations to the World Bank. These days of imperial capitalism are numbered and American corporations are going to take a major hit because of this deal.

There is a serious discussion of issuing a combined currency between the BRICS which would be used in international trading.

The scope of this deal has spread to Pakistan, Iran and Turkey.  This is highly significant because if Turkey is lured into this group, NATO will be undermined and a significant military threat to Russia would be eliminated with regard to the coming World War III.

The BRICS See Through the Facade of International Terrorism

Sources close to the BRICS are openly stating that ISIS represents terror, Western style, and the Washington is behind ISIS. Further, they believe that all the present conflicts in Syria and Ukraine are part of a Western conspiracy to prevent consolidation of the BRICS collective economic and military power.

The BRICS further believe that the economic health of the United States  is terminal and America’s economy is nothing but a mere house of cards.

BRICS sources like to boldly state that the American economy consists of more than 50% of the war and security industry and related services and industries on the planet and that this is not sustainable.

In other words, the “US has a GDP based mostly on destruction“. To the BRICS, the end game for the U.S. is to start a World War with the hope that after various countries  has been reduced to rubble and its citizens massacred, that the American corporations will swoop in and rebuild what’s left over from war.

The BRICS like to quote former World Bank President Robert Zoellick, and his  former statements, to this end.

The stated goal of the BRICS is to use their collective economies to replace the dollar as the world’s reserve currency. The dollar is viewed by these nations as an instrument of oppression and the Federal Reserve sits at the head of the table known as imperialistic oppression. 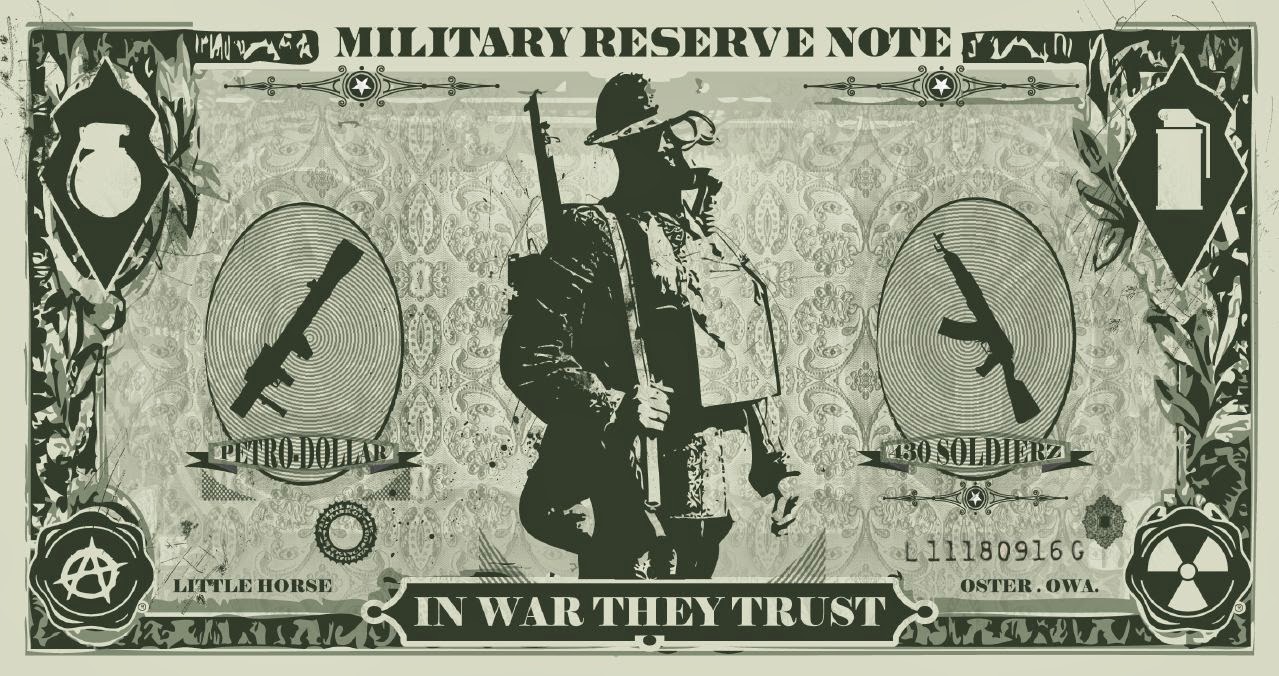 The “military reserve note” is how the BRICS like to refer to the dollar
and it is their main target for assassination.

While our country remains fixed on the controversy involving the shootings of unarmed black men in Ferguson and New York, the United States and its Western allies have stepped up sanctions against Russia.

The Russians are the backbone of the BRICS and crippling their economy is the goal of these American led sanctions.

The Obama administration would like to see a portion of the Russian military tied up in a Ukrainian civil war while Russian gas exports, in which over 60% which runs through Ukraine, needs to be disrupted in order to bring Russia to her knees.

Yesterday, RT reported that the U.S. and the EU are trying to remove Russia from SWIFT money exchanges in an attempt to cripple their foreign trade.

Russia Today has called this an ultimate act of war and Russia will respond accordingly. This move clearly demonstrates the desperation being felt by the Western banks.

As I stated earlier, I despise their very existence and what they have stood for which is economic enslavement and endless wars of occupation. Remember, all wars are banker wars.

However, let me repeat one point; do you want a job to go to, to be able to pay your mortgage and put food on the table? If the BRICS are successful, we would have total anarchy in this country and we are months, not years away from this possibility.

All of these facts are clearly being obfuscated by the main stream media as I would venture to state that 99% of our citizens have never heard of these developments.

War is the End Game

If the BRICS are successful and the dollar is going erode to the point of economic collapse, does anyone really think that the Western banking establishment is simply going to let this system go up in smoke?

War is the end game if the Federal Reserve, the World Bank, the IMF and the major banks of Europe cannot cripple Russia with the onslaught of sanctions.

And finally,some readers are going to write to me and ask when all of this going to happen? It is prudent to act as if it is going to happen tomorrow. You, as an American, need to become as independent as quickly as possible.

I would not make the mistake of looking at the calendar in terms of knowing when the end is coming for the United States. I am instead focused on watching events which foretell the time when the West has no choice but to start a war with the BRICS.

As a marker, I would watch the events inside of Turkey and Germany. If either, or both, leave NATO, I would look for hostilities to commence immediately.

This possibility and the variables behind the coming war will be the topic of the next part in this series.