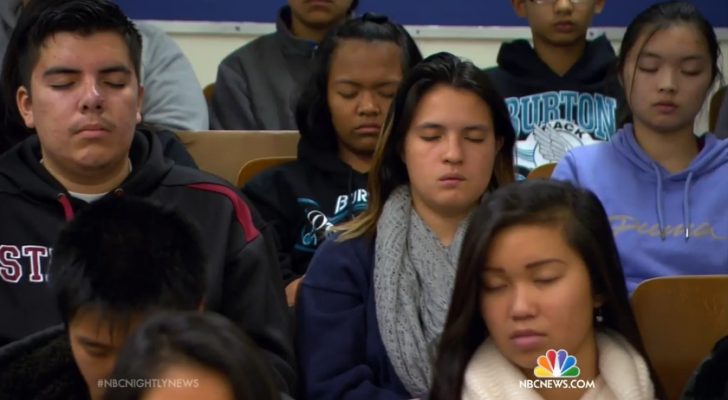 In the heart of one of San Francisco’s poorest and most violent neighbourhoods, guns and other weaponry are no strangers to the youth.

“There’d be fights here 3-5 times per week. The kids see guns on a daily basis, they see all types of weaponry, they have that baggage with them” said Barry O’Driscoll to NBC news, Athletic Director at Visitation Valley School in San Francisco.

But four years ago, the San Francisco school district came across a potential answer for their issue, one that cleverly had its students look ‘inward’ for the outward solution. 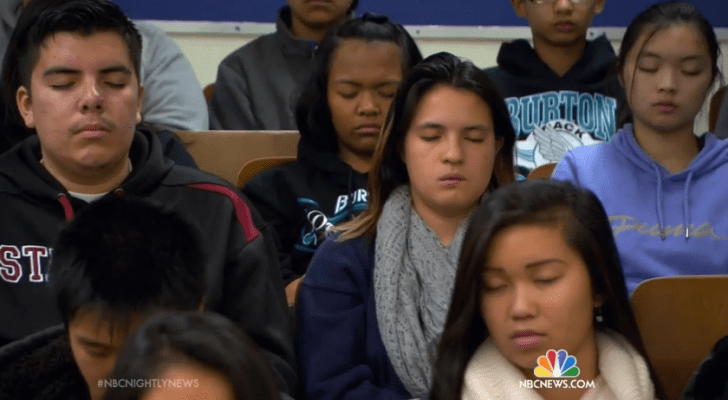 It’s a pioneering program simply called ‘quiet time’, with the idea being to teach the students transcendental meditation to be practiced for 15 minutes, twice daily. The school hoped that this practice could help the students let go of the stresses of their daily lives, even if only for 15 minutes.

“So did you buy into this in the beginning, or were you like, hold on a minute, meditation?”

“I thought it was a joke. I thought, this is ‘hippie’ stuff that didn’t work in the 70’s so how is it going to work  now?” O’Driscoll admitted.

But it wasn’t long until the skeptical coach was made a believer. Four years after ‘Quiet Time’ was introduced into the daily regime of the grade school students, some remarkable results were shown, including a 79% decrease in suspensions, an increase in attendance to 98.3%, and an overall increase of GPA by .4.

Today, over 1500 students and 170 staffers have been trained in transcendental meditation in four schools, including Burton High, a place once known as ‘fight school’.

These are the students at Burton High today:

Bill Kappenhaggen, principal at Burton High, admitted he was initially worried about taking time out of the student’s academic schedule, so he increased the school day by half an hour to make time for meditation.

But his worry proved wrong, as the school has already seen a 75% decrease in suspensions, and a successful jump from the bottom of California’s academic ladder to a rightful spot in the upper middle level of achievement.

Some of the students from Burton high explained what this new practice has done for them,

“It makes you more conscious of your actions,” one female student explained.

“It brings you down to that [level of] ‘calmness’,” another male said.

A young student named Tobias revealed that meditation even helped him deal with his insistent anger, “[Before this], I always wanted to fight everybody for some reason.”

In a closing interview, McFadden asked Principal Kappenhaggen if he really thought it were possible for meditation to change the violence and stresses outside the school walls, to which he responded,

“I do not, but I do believe [that it] can help change the way the [students] deal with the violence, the trauma, and the stresses of every day life.”


This is truly remarkable to see happening for so many reasons. I’m curious as to what our world would look like if we were all taught meditation from an early age?
By Jeff Roberts, Collective Evolution;
The New Year and Why Peaceful Activism Has Never Been So Needed Previous post
Mental Imagery is the Key to Maintaining Muscle Strength Next post