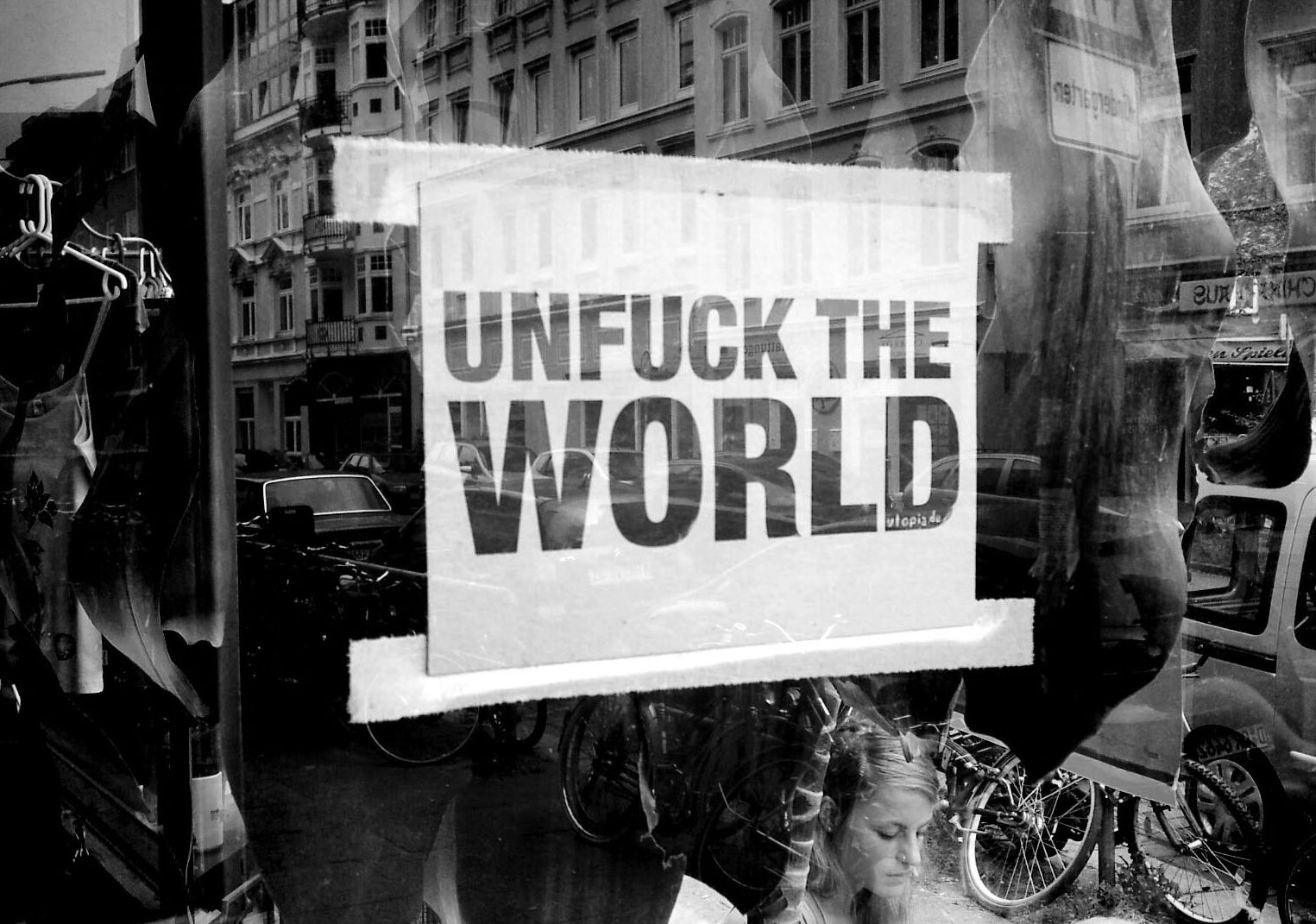 Here’s the thing: the earth is not f*cked. The earth will go on evolving with or without us. In fact, in many ways it is better off without us.

No, it’s the human world that’s f*cked. Either we adapt and overcome by making cooperation primary and competition secondary, or we’re f*cked. It really is that simple. Unf*cking the world will not be a walk in the park.

It will be a complete upheaval of what we think we know about how human beings are “supposed” to live on this planet. We’ll have to turn the tables on our egos, our so called leaders, and even our loved ones. We’ll have to outgrow being indifferent and get used to being different. 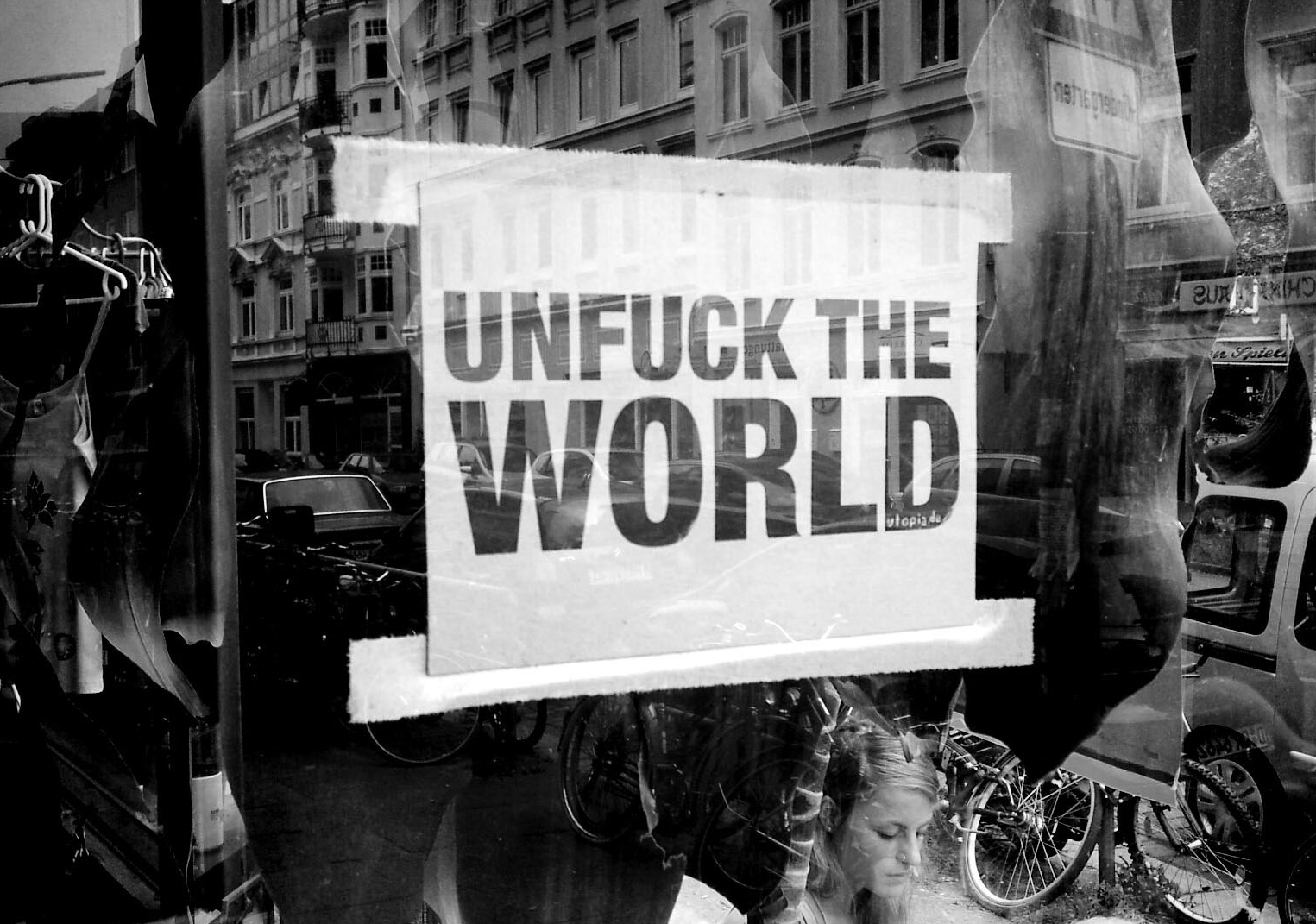 We’ll have to awaken and clear outdated, multigenerational patterns that need interrogation and then integration at a higher vibration. Here are five ways to attempt unf*cking an otherwise f*cked up world. Without further ado, let the unf*cking begin.

“To be human is necessarily to be a vulnerable risk-taker; to be a courageous human is to be good at it.” – Jonathan Lear

Before you can unf*ck the world, you have to unf*ck yourself and then lead by example. Start by questioning everything, especially yourself. Meditate on everything, and then let it go so you are free to create something new. Do it to the nth degree.

Question yourself so hard and so ruthlessly that your bones ache with doubt and your soul trembles with uncertainty. And then let that doubt and uncertainty go. Question your devotion to an unhealthy, unsustainable lifestyle.

Then brainstorm on ways to live healthier and more sustainably. Question why you tolerate and defend unjust, inept, and corrupt systems of human governance. Then free-associate ways to make it more just, more competent, and more honest. A mindf*ck a day keeps the brainwash away.

Question why you’re not doing what it takes too become healthier in mind, body, and soul. Interrogate your ego. Cross-examine your soul.

Then take the answers and apply them to the natural world. Get out into nature and have a deep, interdependent conversation with Mother Nature using a language older than words, and then discard what insults her soul.

Her soul is your soul, after all. Like Walt Whitman said,

“Re-examine all you have been told at school or church or in any book; dismiss whatever insults your own soul.”

Unf*cking the world begins at home. If you unf*ck yourself again and again, you might earn the right to unf*ck the rest of us.

2.) Learn the Subtle Art of Not Giving a F*ck

Here’s the thing: we live in a grossly misbalanced, rigid, stuck-in-the-muck, head-up-its-ass Apollonian society. In order to balance it out, indeed in order to tonalize an otherwise atonal world, we need to dig down deep into our wild, playful, laugh-out-loud, humorous, drunken Dionysian energy.

A primordial energy that could give two blue shits whether or not the powers-that-be approve of our actions. A primal energy that isn’t worried about pissing off authority or rustling the feathers of militant idiots caught-up in their robotic puppetry while gripping rifle butts and splitting the air with their tyrannical heil-f*ckery.

An ancient energy that gives zero f*cks about cultural norms and outdated laws and parochial finger-pointers. We learn to accept what we can’t change, but change what we can’t accept.

It’s the kind of laugh-out-loud energy that caused the beautiful Betty White (who just so happens to not give a f*ck) to say:

“Why do people say ‘grow some balls’? Balls are weak and sensitive. If you wanna be tough, grow a vagina. Those things can take a pounding.”

“Democracy is two wolves and a lamb deciding on what to eat for lunch. Liberty is a well-armed lamb contesting the vote.” – Benjamin Franklin

A well-armed lamb is a lion in sheep’s clothing that has the potential to trump the wolf. A black sheep who has unf*cked themselves out of the illusion of being shepherded and into the reality that the world is what we make of it.

Or we can choose to be the wise lion and really become a force to be reckoned with. Part of unf*cking the world is understanding how the world is put together, and that requires knowledge.

A well-armed lamb is a wise lion that cannot be ignored. This type of person knows all the rules, but the rules don’t know them. They are artists par excellence.

Their medium is human flourishing. Their canvas is the human condition. Their stage is the world. And nothing can stop them from performing. Paraphrasing Picasso, they’ve learned the rules like a pro, so they can break them like an artist.

“Government is actually the worst failure of civilized man. There has never been a really good one, and even those that are most tolerable are arbitrary, cruel, grasping and unintelligent.” –H.L. Mencken

Democracy’s failure as a form of government is surpassed only by all other forms of government, but that doesn’t get it off the hook as an utter failure. Besides, we don’t even live in a democracy anymore.

We live in an especially greedy form of oligarchy known as plutocracy. If orange is the new black, then plutocracy is the new tyranny. And it’s f*cking up more shit than any other form of tyranny has in the whole of human history.

If there’s ever been a reason to count coup on the enemy, it’s this. You want to unf*ck the world? Then get out there and f*ck up the unhealthy, unsustainable system that is systematically f*cking everything else up.

The only people mad at you for speaking the truth are those people who are living a lie. Speak the truth anyway, even if it pisses off everyone you know.

“The truth will set you free. But first, it will piss you off.”

A huge part of unf*cking the world is living by example and showing others how to unf*ck themselves. And the only way to do that is to be brutally honest with the truth. Never underestimate the power of planting a seed of truth in a fertile mind.

A young wannabe activist once asked me,

“What if I get caught?” I said, “Motherf*cker, you’re already caught. What you should be asking is: what if I get free… And what you should be saying is: The fat-faced tyrants of f*ckery may win in the end, but I’ll go down slinging my words in free-speech defiance while trumping them with swift circles of non-violence.”

MLK Jr. would have been so proud. Okay, maybe not. But Malcom X would have had my back, for sure.

If you’ve learned how to unf*ck yourself and you’ve learned the art of not giving a f*ck and you’ve become a well-armed lamb and you’re daily counting coup on tyranny, then you, my friend, have the world by the f*cking balls.

You have achieved the almost immortal status of getting power over power. You are a f*ck-sight closer to achieving Ubermensch status than probably 99.999999% of the population. It’s time to fall in love: in love with the moment, with the universe, with your fellow man, even your enemy; a deep, carnal, agape love that shatters all love-molds.

The beauty of being in this kind of love is that it gives you insurmountable courage. The kind of courage that rises up, draws a line in the sand, and declares to all forms of corruption and tyranny,

“You no longer have permission to imprison what I love. I am no longer a slave. Nor will I allow you to enslave others. I am the David your overreaching Goliath heart has been waiting for. Your f*ckery stops here!”

Like Simone De Beauvoir ingeniously opined, “A freedom that is interested only in denying freedom must be denied.”